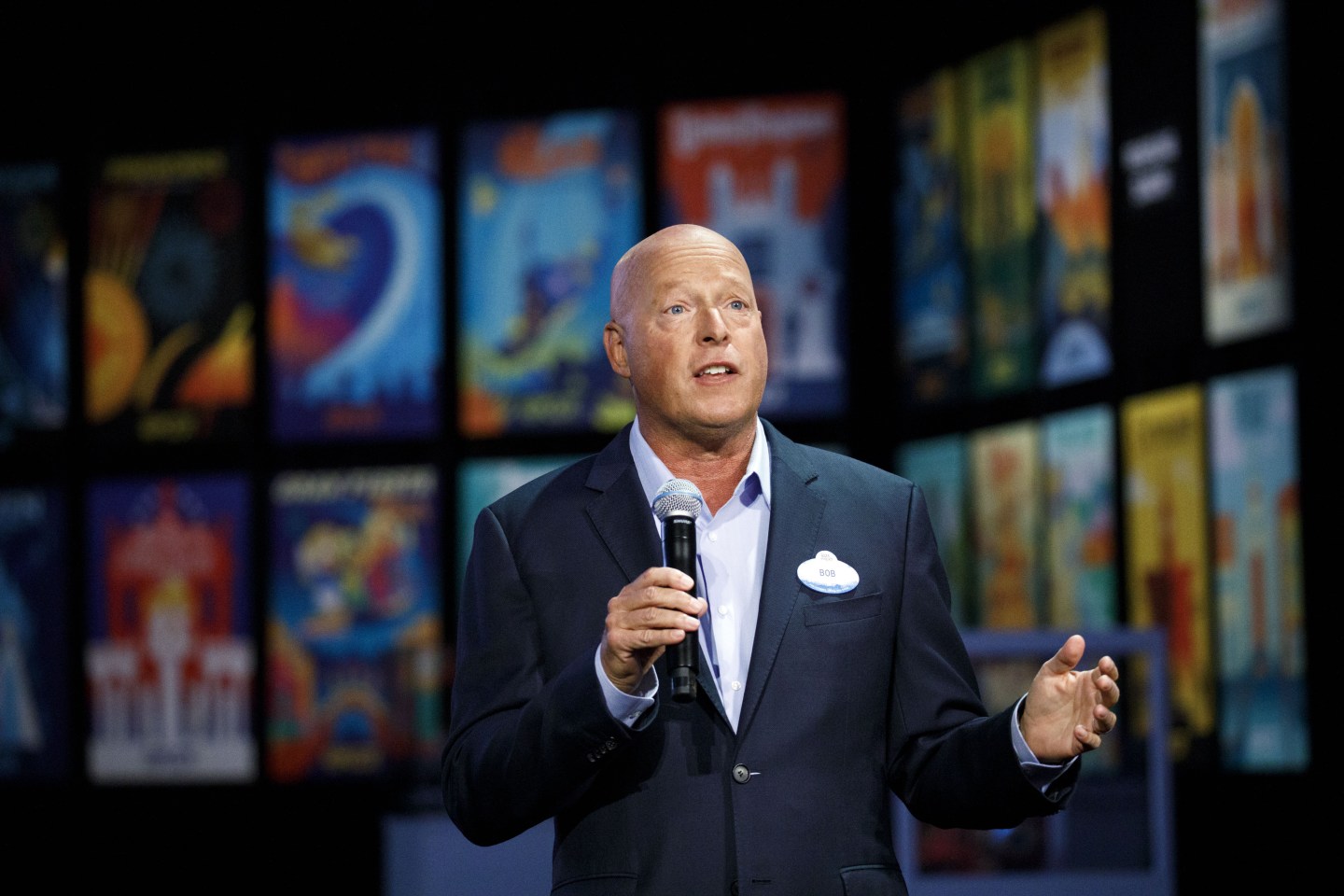 Before we get to today’s main topic—the slight cracks emerging in Disney’s streaming strategy—a couple of spare thoughts on the biggest story of the day.

Meta notified employees Wednesday morning that it’s laying off about 11,000 staff members, or 13% of its workforce, the company’s first major restructuring in its history. Mark Zuckerberg took responsibility for the cuts, admitting that he failed to foresee how many people would scale back their app usage as life returned to pre-pandemic normal.

The big question, still unanswered, is how Meta will apportion those layoffs. In his message to employees, Zuckerberg said every part of the company would feel some pain, particularly singling out recruiting and business teams. But as discussed here Monday, Zuckerberg’s prized yet massively unprofitable Reality Labs unit—responsible for developing augmented reality, virtual reality, and metaverse technologies—likely won’t feel the brunt of job cuts.

Also, some perspective on Meta’s layoff count is in order. While 13% is certainly a significant proportion of the Facebook and Instagram parent’s workforce, these layoffs only return Meta to its employee headcount as of early 2022. And while Reality Labs accounts for a sizable chunk of hiring over the past year, Meta’s headcount in marketing and sales divisions increased 14%, and general and administrative units grew by 30% during that time.

All of which to say: Meta should be able to restructure without needing to dramatically revamp its master plan.

Now, onto the House of Mouse.

Disney disappointed Wall Street a bit on Tuesday, announcing fiscal fourth-quarter earnings that showed record losses in its streaming business, which covers Disney+, Hulu, and ESPN+. The unit recorded operating losses of nearly $1.5 billion for the quarter, up from roughly $1.1 billion in the prior quarter.

CEO Bob Chapek and his leadership team attributed the mounting woes to rising content costs and some unexpected areas of revenue softness, including dips in ad sales for Hulu and Disney+ Hotstar, its service for Indian subscribers.

Chapek continued to maintain his position that Disney’s streaming business will reach profitability by 2024, with the prior quarter representing peak losses. He cited the December dawning of price hikes and arrival of an ad-supported Disney+ tier, along with continued subscriber growth and some realignment of costs, as reasons for optimism.

At the same time, Disney doesn’t appear to have hit market saturation quite yet. The company added another 14.6 million subscribers in the prior quarter, beating analysts’ expectations. Half of that growth came from international markets where subscribers pay top dollar for the service. (Disney’s Indian customers get Hotstar at deeply discounted prices.)

Still, tiny fissures are popping up in the foundation of Disney’s strategy—which could develop into ruptures if the ground moves under the streaming industry.

Disney’s price hikes arrive at a rather inopportune time, as the world economy wavers in the face of stubborn inflation and geopolitical strife. Chapek acknowledged as much Tuesday, saying for the first time on an earnings call that his profitability timeline assumes “we do not see a meaningful shift in the economic climate.”

Disney’s heady content spending also puts added pressure on attracting and retaining consumers. Headed into a period of subscriber uncertainty, Disney executives said their content budget for the current fiscal year will be in the low $30 billion range, a fractional uptick from the prior year. For context, Netflix officials expect to spend roughly half that amount on content this year.

Wall Street also left Tuesday pondering the meaning of a 10% drop in average revenue per Disney+ subscriber in the U.S. and Canada. Corporate executives partially attributed this to more customers opting to bundle Disney+, Hulu, and ESPN+, which prompted some analysts to question whether subscriber growth totals are a bit inflated.

As PP Foresight analyst Paolo Pescatore said, according to Reuters: “Expect more bumps ahead and further losses in the streaming business, as there’s no silver bullet to profitability.”

Ad nausea. TikTok is cutting its 2022 ad revenue target by at least $2 billion—the latest example of a deteriorating ad market hitting a social media giant, the Financial Times reported Wednesday. The ByteDance unit now projects ad revenue of $10 billion this year, down from earlier estimates of $12 billion to $14.5 billion, four people familiar with the matter told the Times. The sources also said ByteDance has officially scrapped fading plans for an initial public offering in Hong Kong this year.

No dancing on graves. Binance CEO Changpeng “CZ” Zhao told employees Wednesday that the near-collapse of rival FTX has “severely shaken” confidence in the cryptocurrency industry and will lead to greater regulatory scrutiny, CoinDesk reported. Zhao’s comments came one day after Binance, the world’s largest crypto exchange, reached a nonbinding agreement to acquire FTX, the world’s second-largest exchange, amid a liquidity crisis at the latter company. CoinDesk also reported Wednesday that Binance is “highly unlikely” to go through with the acquisition after reviewing FTX’s financial state, citing a source familiar with the matter.

Twice as nice. Taiwan Semiconductor Manufacturing Co. intends to build a second multibillion-dollar chip factory in Arizona, a potential victory for U.S. policymakers pushing to onshore more semiconductor production, the Wall Street Journal reported. The world’s largest chip manufacturer has not disclosed plans for the plant, but sources told the Journal that the factory will announce the project in the coming months. The investment is expected to mirror the $12 billion factory under development by TSMC on the outskirts of Phoenix.

Twitter didn’t come cheap. Tesla CEO Elon Musk unloaded nearly $4 billion worth of stock in the electric vehicle company over the past several days, continuing a selloff that started with his decision earlier this year to buy Twitter for $44 billion, the Associated Press reported Wednesday. The latest move brings Musk’s total selloff of Tesla stock since April to $19 billion. Musk arranged financing and equity investors to take Twitter private, leaving his ultimate financial liabilities related to the purchase unclear.

Don’t forget them. Complaints about “Big Data” often center around Google, Amazon, and a few other oft-criticized tech outfits. But as law professor and author Sarah Lamdan writes in a new book excerpted Wednesday by Wired, the lesser-known firm Reed Elsevier LexisNexis has emerged as a leading publisher and data broker while avoiding the same level of public scrutiny as its tech brethren. RELX has grown into a billion-dollar enterprise in part by collecting and selling data tied to millions of people, with law enforcement, government agencies, and employers among its top clients. Companies like RELX have operated with relatively minimal scrutiny from federal officials, in part because Congress has not passed comprehensive data privacy laws since the dawn of the internet.

These companies and institutions use RELX’s “risk” products to make decisions about whether you should get hired for a job, have custody of your children, have access to certain types of medication, and even whether you will be detained or arrested. RELX’s LexisNexis products have helped the government spy on protesters’ social media accounts and surveil immigrants. Police have abused LexisNexis systems to spy on exes and even to blackmail women using the personal information the company’s policing products provide.

Using RELX products for data surveillance is problematic because the company funnels a deluge of unfiltered, unvetted data through biased data-processing algorithms. The combination of bad data and bad algorithms leads to government systems that bake historically racist, xenophobic policing practices and outcomes into a Minority Report–like digital policing dystopia.

The Binance/FTX acquisition could be a big blow to crypto VC, by Anne Sraders and Lucy Brewster

The quality of Twitter conversation has ‘decayed’ after Elon Musk’s takeover, by Alena Botros

Generative A.I. is fun. Just don’t assume it will lead to AGI, by Jeremy Kahn

Big Tech is laying off employees–but their skills are needed elsewhere. Here’s how former tech workers can bridge talent gaps in aerospace, by Teresa King

Next ad up. The FTX calamity has some corners of the sports world playing defense. As Bloomberg noted Tuesday, the cryptocurrency exchange served as a big sponsor for various athletics enterprises, leaving its high-profile, multimillion-dollar deals in flux. FTX currently owns the naming rights to the Miami Heat’s NBA arena under a 19-year, $135 million deal signed last year. The exchange also advertises with Major League Baseball—umpires donned the company’s logo on their uniforms—and a top Formula 1 racing team. Sports franchises and leagues have embraced crypto entrepreneurs in recent years, with Bloomberg finding $2.4 billion worth of marketing deals reached since early 2021. But with the crypto industry dropping the ball, some Monday morning quarterbacking might be in order.