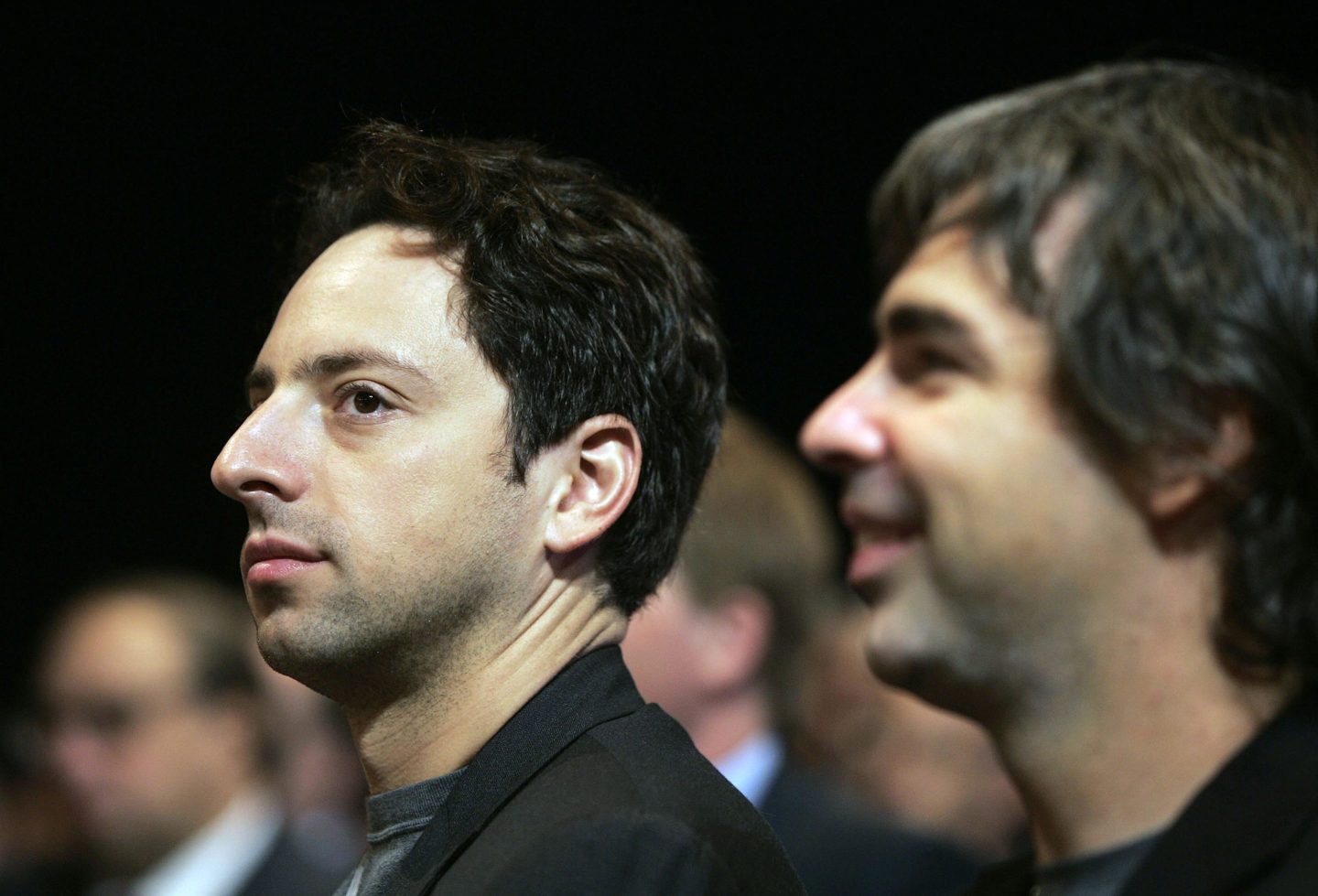 Google founders Sergey Brin and Larry Page have been summoned back to help fend off the ChatGPT threat.
Chris Hondros—Getty Images

Two major pieces of news dropped in the past 24 hours—layoffs at Google parent Alphabet, and Netflix’s co-CEO stepping down from the role—so today’s Data Sheet is evenly split between the announcements.

First, let’s dive into Alphabet CEO Sundar Pichai’s letter announcing that the company is eliminating about 12,000 jobs, or 6% of its global workforce.

Much of Pichai’s message is, by now, boilerplate stuff for the tech industry. The company hired too aggressively over the past few years, expecting rapid growth to continue post-pandemic. Then the economy took a turn, necessitating some bloodletting. Affected employees will get generous severance packages. The CEO takes responsibility for the misread. Company executives remain excited about the future.

“Over the past two years we’ve seen periods of dramatic growth,” Pichai wrote. “To match and fuel that growth, we hired for a different economic reality than the one we face today.”

But read a little deeper into Pichai’s mea culpa, and there’s a clear issue weighing on his mind: Microsoft’s A.I. advances.

While much of the 577-word message is garden-variety stuff, Pichai goes out of his way on two occasions to highlight the company’s A.I. ambitions. Early in the memo, Pichai says he’s “confident about the huge opportunity in front of us,” specifically mentioning “our early investments in AI.” Later, Pichai teases the imminent arrival of A.I.-related leaps across its suite of services.

“Pivoting the company to be AI-first years ago led to groundbreaking advances across our businesses and the whole industry,” Pichar wrote. “Thanks to those early investments, Google’s products are better than ever. And we’re getting ready to share some entirely new experiences for users, developers and businesses, too. We have a substantial opportunity in front of us with AI across our products and are prepared to approach it boldly and responsibly.”

The comments suggest the company is keenly aware of whispers that it’s moved too cautiously on the A.I. front, particularly as Microsoft generates copious buzz about integrating preferred partner OpenAI’s captivating machine-learning technology into its products. For further evidence, look at the New York Times’ report Friday that Alphabet executives called in founders Larry Page and Sergey Brin, who aren’t a regular presence at the company, to review A.I. product strategy.

Google’s slower and steadier approach still might win the A.I. race. For now, Pichai clearly wants employees and investors to know that Microsoft will soon have a giant rival breathing down its neck.

Give Netflix co-founder Reed Hastings this much: The man had a vision.

Asked in 2002 about his driving motivations for the company, a fledgling DVD-by-mail outfit at the time, here’s what Hastings told Wired: “The dream 20 years from now is to have a global entertainment distribution company that provides a unique channel for film producers and studios.”

Hastings announced Thursday that he’s transitioning from co-CEO to executive chairman, serving as a “bridge” between management and the company’s board. He’ll also focus more on improving Netflix’s stock price and tending to his philanthropic ventures.

The founding CEO lived up to two of his most-treasured values—innovation and flexibility—while upending the global entertainment landscape.

The latter principle served Netflix particularly well in recent months, as Hastings backed off his long-held aversions to offering an ad-supported tier and cracking down on password sharing. Both shifts have Netflix well-positioned to generate short-term revenue bumps and emerge from the streaming wars on solid footing. Netflix shares jumped 7% in midday trading Friday after the release of fourth-quarter earnings showed better-than-expected subscriber growth.

For co-CEOs Ted Sarandos and Greg Peters, who was anointed as Hastings’ successor Thursday, the challenge becomes building on Hastings’ legacy of innovation.

As it stands, Netflix is focused more on evolution than revolution, looking to squeeze more out of its core streaming business (a venture into mobile gaming is underway, though early results are mixed at best). Netflix isn’t a particularly diversified business relative to the biggest Big Tech giants, and the company isn’t investing heavily in cutting-edge technology like virtual reality and generative A.I.

That approach is likely wise for the time being, given the uncertain market for the metaverse, VR headsets, and other ambitious tech. Sooner or later, though, Netflix will need to make another major pivot—this time without Hastings’ vision leading the way.

Bothered by Beijing. FBI Director Christopher Wray told a Davos crowd Thursday that he’s “deeply concerned” about the Chinese government weaponizing A.I. technology against the U.S. and the republic’s critics, the Associated Press reported. Wray warned that China could use its A.I. capabilities to expand its hacking operations, steal more intellectual property, and further oppress dissidents. U.S. counterintelligence officials have shared similar concerns in recent years, while Chinese leaders have brushed off denunciations as American fear-mongering.

Keeping it in the family. Texas Instruments announced Thursday that longtime CEO Rich Templeton will step down in April and Chief Operating Officer Haviv Ilan will replace him, CNBC reported. Templeton has led the chipmaker since 2004, while Ilan has served in executive roles at the company since 1999. Ilan will be responsible for shepherding major investments in building up production capacity amid a downturn in chip demand.

The Un-secured carrier? T-Mobile disclosed Thursday that a hacker stole data on 37 million customer accounts earlier this month, but the breach does not appear to involve consumer financial data, Bloomberg reported. The wireless provider said the hacker gained access to customers’ names, billing addresses, phone numbers, and other non-payment-related data. T-Mobile officials said they spotted the hack on Jan. 5, stopped it within a day, and reported the breach to law enforcement.

The likeliest candidate for metaverse ambitions is Epic Games’ “Fortnite,” according to 14% of respondents. Meta and “Minecraft” got 7% of the votes each. “Roblox” got fewer votes at 5%. But despite these mild votes of confidence, 45% of respondents — a plurality — believe that “the metaverse concept will never deliver on its promise.”

One anonymous respondent, whose answers represented a common perspective among developers, explained the skepticism: “The ‘metaverse promise,’ as it stands, is nothing. The people trying to sell it have no idea what it is, and neither do the consumers. Remember what happened, and keeps happening, with cloud gaming a decade ago?”

Tech layoffs in 2023 are already one-third of last year’s number and it’s only January, by Chris Morris

Mark Cuban says success with generative A.I. like ChatGPT will come down to asking it the right questions: ‘We are just in its infancy’, by Steve Mollman

Meet 11 creator economy ‘insiders’ who work behind the scenes to turn viral views into dollars, by Alexandra Sternlicht

Tesla, JPMorgan, Meta: How companies that rely too much on one leader put their operations at risk, by Lila MacLellan

Crypto media companies are up for sale. But who will buy them?, by Jeff John Roberts

To reinvent globalization, companies and countries should think ‘diversifying,’ not ‘decoupling,’ according to McKinsey Global Institute’s research, by Bob Sternfels and Olivia White

Stung by Sting. Memo to Microsoft execs: Every move you make in Davos, employees will be watching you. The tech giant, which announced Wednesday that it’s laying off 5% of its workforce, is under fire this week after the Wall Street Journal reported that it hosted a small, private event at the Swiss confab featuring music icon Sting. While it’s unclear whether Microsoft paid Sting to perform, the Police frontman charges upward of $500,000 for private gigs, according to his booking agency. The synchronicity of rank-and-file workers packing up cubicles and highly paid executives swooning over Sting understandably prompted squawking from workers about bad optics.