Tesla, JPMorgan, Meta: How companies that rely too much on one leader put their operations at risk 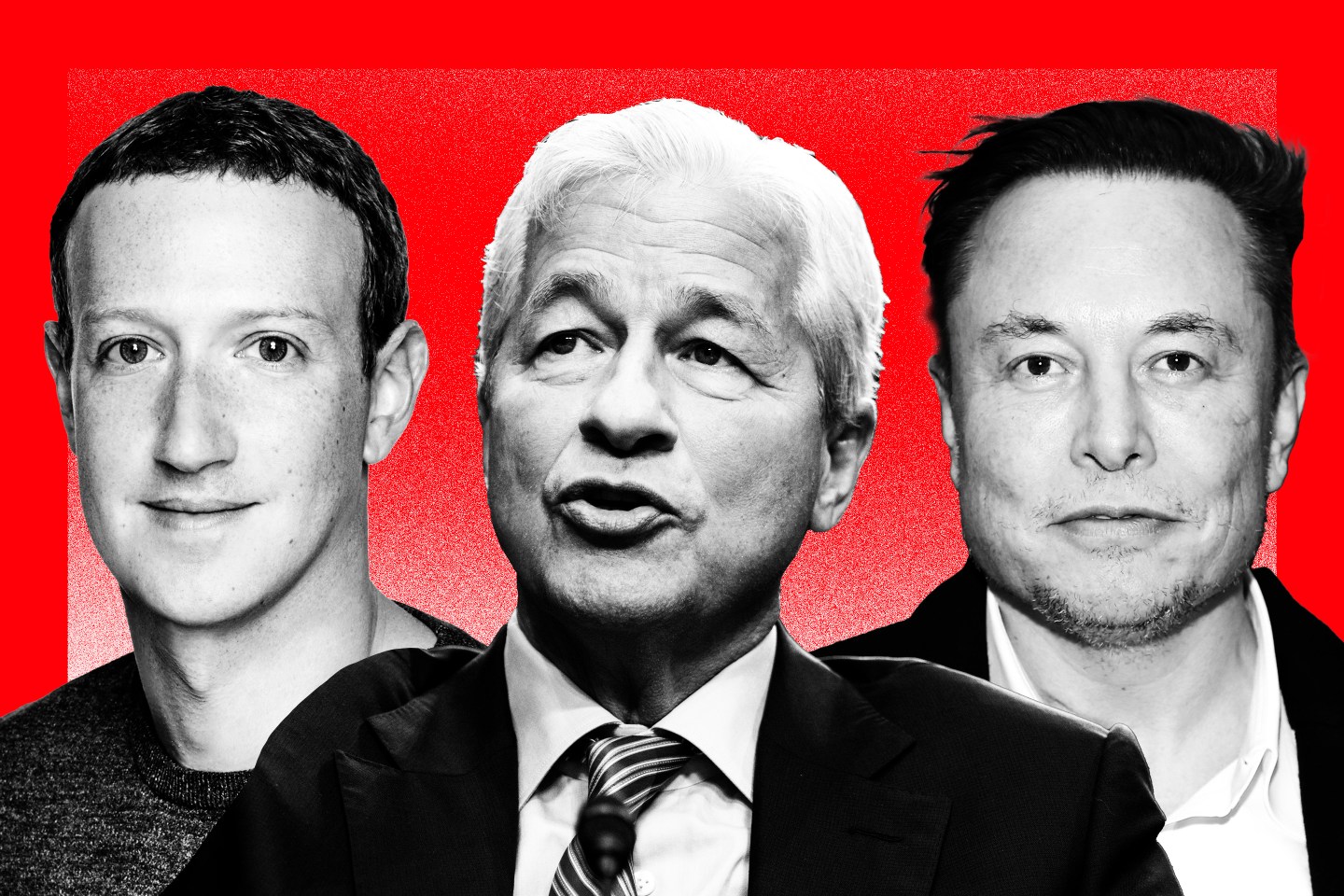 Tesla’s directors ought to be fixing for a showdown or two at this year’s annual meeting, scheduled for mid-May. One investor plans to make a board seat bid, while an Iceland-based shareholder is proposing that the board create and maintain a key-person risk report about CEO Elon Musk.

That shareholder wants the board to reassess the company’s dependence on Musk’s leadership since he appears to be distracted—to put it mildly—by his day job as Twitter CEO. (Musk is also the chief executive at SpaceX.)

As the name implies, a company is said to have key-person risk, née key-man risk, when it relies too heavily on one individual to maintain operations and momentum. Boards are expected to develop risk-mitigation plans for anything that might sideline an influential figure, including illnesses, accidents, unexpected deaths, criminal charges, or sudden resignations.

Key-person risk comes in “three flavors,” The Economist wrote in 2018. Sometimes one person has too much control (think CEO Mark Zuckerberg at Meta or any company where voting rights give a founder-CEO outsized influence). Other times, only one executive is seen as talented enough for the job (consider Steve Jobs at Apple, before Tim Cook proved his mettle, or JPMorgan’s Jamie Dimon now). Then some companies are so complex only one mind understands how all its pieces fit together.

But it isn’t only CEOs who get caught up in unhealthy codependent relationships. The titular key person might be an inventor, marketing director, or CTO. It’s different for every business, says Fred Foulkes, a professor of management at Boston University’s Questrom School of Business, recounting a time he sat on the board of a restaurant company that relied on its sharp real estate expert.

While companies of all sizes should guard against key-person risk, it might pose the biggest challenge for midsize firms, says Paroon Chadha, CEO and cofounder of OnBoard. He argues that large firms are typically aware of this hazard and will prioritize succession planning. They have systems and thousands of eyes—shareholders, institutional investors, the press—tracking the problem. Smaller companies, too, are conscious of key-person risk because of their size. “Scarcity drives clarity,” says Chadha. However, midsize companies, having neither depth nor a fierce survival instinct, might hire functional leaders without thinking much about succession.

Fortunately, boards can pull a few levers to protect companies from key-person risk. The most obvious first step is to take out key-person insurance. Many companies also impose rules about how many leaders can share the same flight. While rare, term limits for a CEO can force a company to see a chief executive as a caretaker rather than a lifer.

In any case, most companies are more protective of a top executive’s energy than Tesla, says Foulkes. He remembers one situation where a CEO sought to become the chair of a company his son launched. The board agreed to it only after the CEO pledged not to spend much time at the startup. “At least in my experience on boards,” Foulkes deadpans, “you want your CEO to be full-time at the company.”

Because key-person risk isn’t totally within any mortal’s control, boards should also commit to rigorous succession planning that goes deep into an organization, says Donna Hamlin, CEO of BoardWise. Board members have been hands-off about looking beyond the CEO role for a long time, but that’s changing. Some boards have begun matching directors with specific skills to their counterpart executives, so board members can help develop and mentor talent while gaining deeper insight into the company’s executive ranks.

OnBoard’s Chadha sees the value in that trend but also praises the unorthodox style at Netflix. There, board members attend a few annual executive meetings, learning about a company’s leaders firsthand and in real-time rather than passively consuming a prepared narrative fed to directors at board meetings.

Once a company has identified internal candidates for promotion into key roles, they must also be careful in communicating their plans, Chadha cautions, so high-potential employees do not leave in frustration. A clumsy attempt to address key-person risk could create new vulnerabilities.

Meanwhile, a potential change to employment laws could make external searches easier. The Biden administration hopes to ban noncompete agreements, which prohibit former employees from accepting jobs within the same industry for a set period. If outlawed, boards thinking ahead could search the competition for key-person successors, knowing those stars could start immediately.

“If you’re going to be a lead director of a decent-sized public company, you’re not doing it for the money. So why create the optics that one director is more senior than others?”

—A Fortune 50 CEO explains why lead directors shouldn’t be paid significantly more than other directors in Harvard Business Review.

On the Agenda: The All-Disney Edition

👓 Read: Nelson Peltz’s bid for a board seat at Disney is all about the activist investor’s need for “drama and attention,” writes Jeffrey Sonnenfeld, Yale management professor, and Steven Tain, director of research at the Yale Chief Executive Leadership Institute. “Like the last flicker of a candle before flaming out, it’s a sign of desperation,” they say.

🎧 Listen: What is Peltz proposing, anyway? And what’s the best way for Disney to deal with his provocations? The Ringer podcast digs into the history of this proxy fight and shares a few hot takes.

📖 Bookmark: As the proxy fight unfolds, here’s a link to Peltz’s online campaign explaining his position. Read Disney’s pushback, including its defense of its revamped board, here.

Greg Peters, the new co-CEO of Netflix, is joining the streaming giant's corporate board. Reed Hastings, founder and former co-CEO and chair is becoming executive chair. Alicia Boler Davis, CEO of Alto Pharmacy and former leadership executive for Amazon and General Motors, was elected to JPMorgan Chase’s board, effective March 20. Raytheon added Leanne Caret, most recently a senior advisor for The Boeing Company, as a director. M&T Bank tapped Carlton Charles, corporate treasurer at Hearst, to join its board. Hertz announced several board changes: Chair Greg O'Hara is stepping down as chair; CEO Stephen Scherr will assume that role. Fran Bermanzohn, former deputy general counsel at Goldman Sachs, and Jeffrey Nedelman, a senior managing director at Certares, were added as independent directors. Bally’s named Tracy Harris, most recently CFO of MIB Group Holdings, to its board.

- In a plot twist that only the Netflix board saw coming, Reed Hastings, the company's founder, is giving up his CEO role to become executive chairman. "Our board has been discussing succession planning for many years (even founders need to evolve!)" Hastings wrote in a blog post.

- WWE’s Vince McMahon surprised everyone when he returned to the board. Now a shareholder lawsuit may have him on the ropes.

- Economic conditions and capital strategy top the list of concerns boards are prioritizing in 2023, while climate change and geopolitical risks rank near the bottom in EY’s latest survey.

- Forty organizations, including Bank of America, Disney, Google, McDonald’s, Meta, and Walmart, have signed a cross-industry pledge to end the stigma associated with working with cancer. Arthur Sadoun, CEO of Publicis, spearheaded the campaign.

Though it’s been three years since the first confirmed COVID-19 case in the U.S., American companies are still coming to terms with the pandemic’s effect on how we work. Debates about in-office policies remain fraught and unsettled. CEOs who want to see employees in their desks struggle to make that happen without creating policies that inspire “malicious compliance,” as Fortune senior editor at large Geoff Colvin writes in this deep dive into Goldman Sachs’ return-to-office battle.

“‘Friday’s dead,’ says the glum counter guy at the street-level convenience store in Goldman Sachs’ lower Manhattan headquarters building. ‘Not many people on Fridays. I think nobody’s here,’ he says, pointing upward to the 43 stories of Goldman offices above him.

The man behind the cash register isn’t the only one noticing that Goldman’s ranks are thinner on Fridays. CEO David Solomon has the data. ‘Certainly Monday through Thursday, we’re operating pretty close to the way we were operating before the pandemic,’ he told a Wall Street Journal conference in December. ‘Fridays are a little different.’”

Read the full case study here, and enjoy the rest of your Friday from wherever you are.