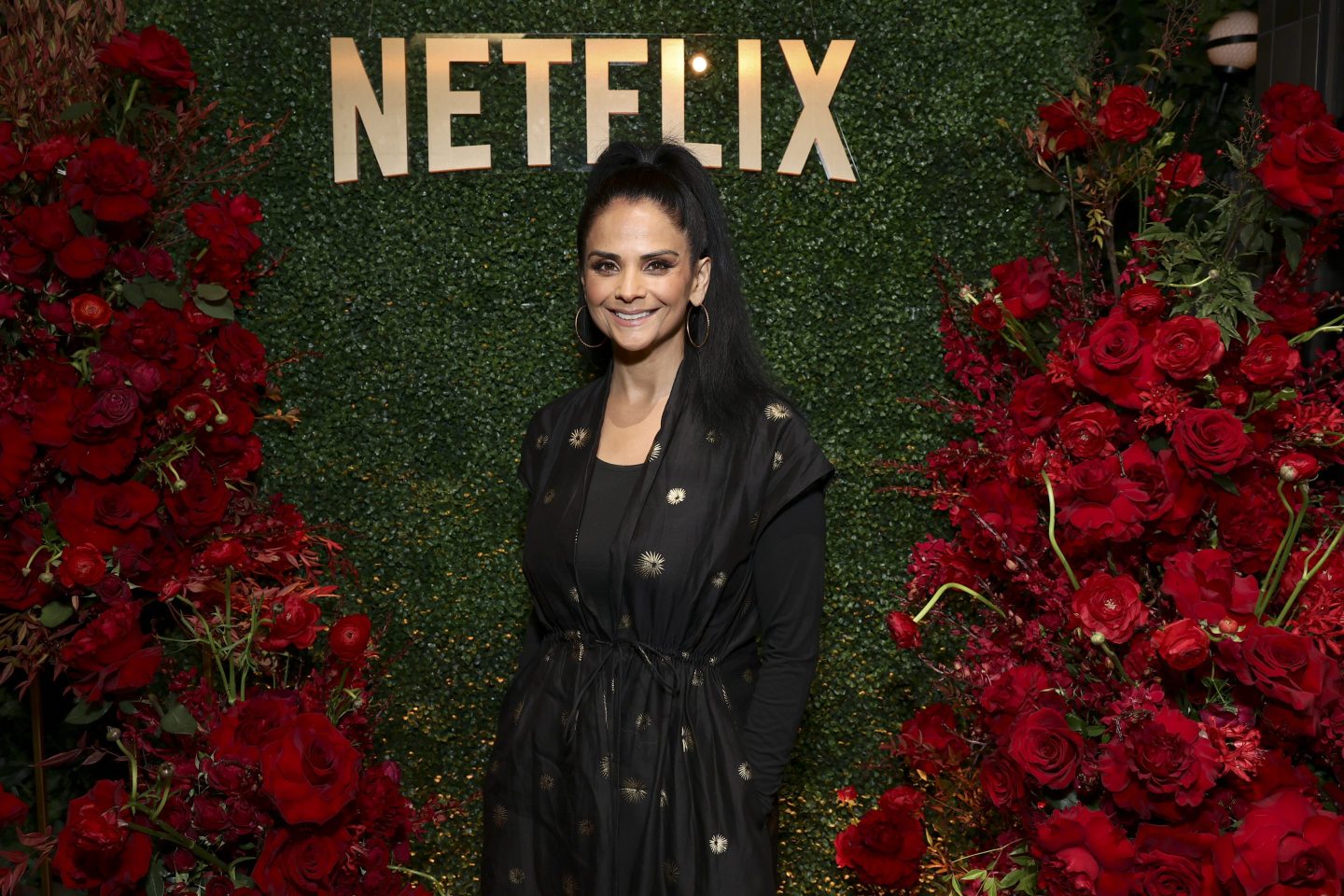 Bela Bajaria made a name for herself at CBS and Universal before climbing the ranks at Netflix.
Emma McIntyre—Getty Images for Netflix

Bela Bajaria became one of the most powerful women in Hollywood on Thursday. As part of a management shakeup at Netflix, Bajaria, formerly head of global TV, is now the streaming giant’s chief content officer. Co-CEO Ted Sarandos previously held the title since March 2000.

In addition to Bajaria’s appointment, Netflix cofounder Reed Hasting announced he’s stepping down as co-CEO, with chief operating officer Greg Peters taking his place. Hastings will serve as chairman of the board. Scott Stuber, head of global films, was named chairman of Netflix Film.

“Bela and Scott are outstanding creative executives with proven track records at Netflix,” Sarandos said, pointing to popular projects released under their leadership, including Wednesday, Monster: The Jeffrey Dahmer Story, and Harry & Meghan. “I couldn’t be more excited to work alongside them as we seek to delight audiences for years to come.”

Born in London to Indian parents before moving to Los Angeles at age eight, Bajaria built a name for herself in television before joining Netflix in 2016. She joined CBS as an assistant in 1996, and by the time of her departure in 2011, was senior vice president of cable programming and SVP of movies and miniseries. She then joined Universal as president of Universal Television, where she was instrumental in launching programs like The Mindy Project (created by and starring her friend Mindy Kaling, who went on to create the Netflix series Never Have I Ever) and Brooklyn Nine-Nine. Bajaria abruptly left the network in 2016 over alleged criticism that she was not developing enough successful shows for NBC.

Soon after, she joined Netflix as head of unscripted and international content. She quickly rose through the ranks, taking on non-English television programming in 2019, and was appointed to her most recent role by Sarandos in 2020, replacing former TV head Cindy Holland. Bajaria made sense for the streaming giant as it shifted focus to more easy-watching and binge-able content to compete with HBO, AMC, Comedy Central, and others. Bajaria was named to Fortune’s Most Powerful Women ranking that same year.

During her tenure as head of global TV, Bajaria oversaw a $17 billion content budget, the launch of Netflix’s most-watched show, Squid Game, and the return of mainstay programs like Ozark and Bridgerton. She also restructured the streamer’s TV department and expanded its global audience, telling the L.A. Times in 2021 that just 35% of Netflix’s subscribers are from the U.S. and Canada, and 97% of U.S. subscribers watched at least one non-English title that year.

In a recent New Yorker profile, Bajaria likened the ideal Netflix show to what one of her VPs described as a “gourmet cheeseburger,” something “premium and commercial at the same time.”

“It’s not a science. It’s a big creative endeavor. But it’s about recognizing that people like having more,” she later told a group at the company’s Latin American headquarters in Mexico City.

Despite the company’s recent setbacks, including its first-ever subscriber loss in April 2022 and plummeting stock price, Bajaria seemingly embraced the challenge, telling the audience at a media festival in June that “it’s a good place to be the underdog.” The streamer’s more recent numbers are rosier, with a subscriber rebound in its third and fourth quarters, partly due to the success of programs under Bajaria’s wing, including Stranger Things 4. The streamer announced Thursday it added another 7.66 million subscribers in its fourth quarter.

Netflix did not respond to a request for comment.