Want social media companies to step up their election game? Give them a financial reason 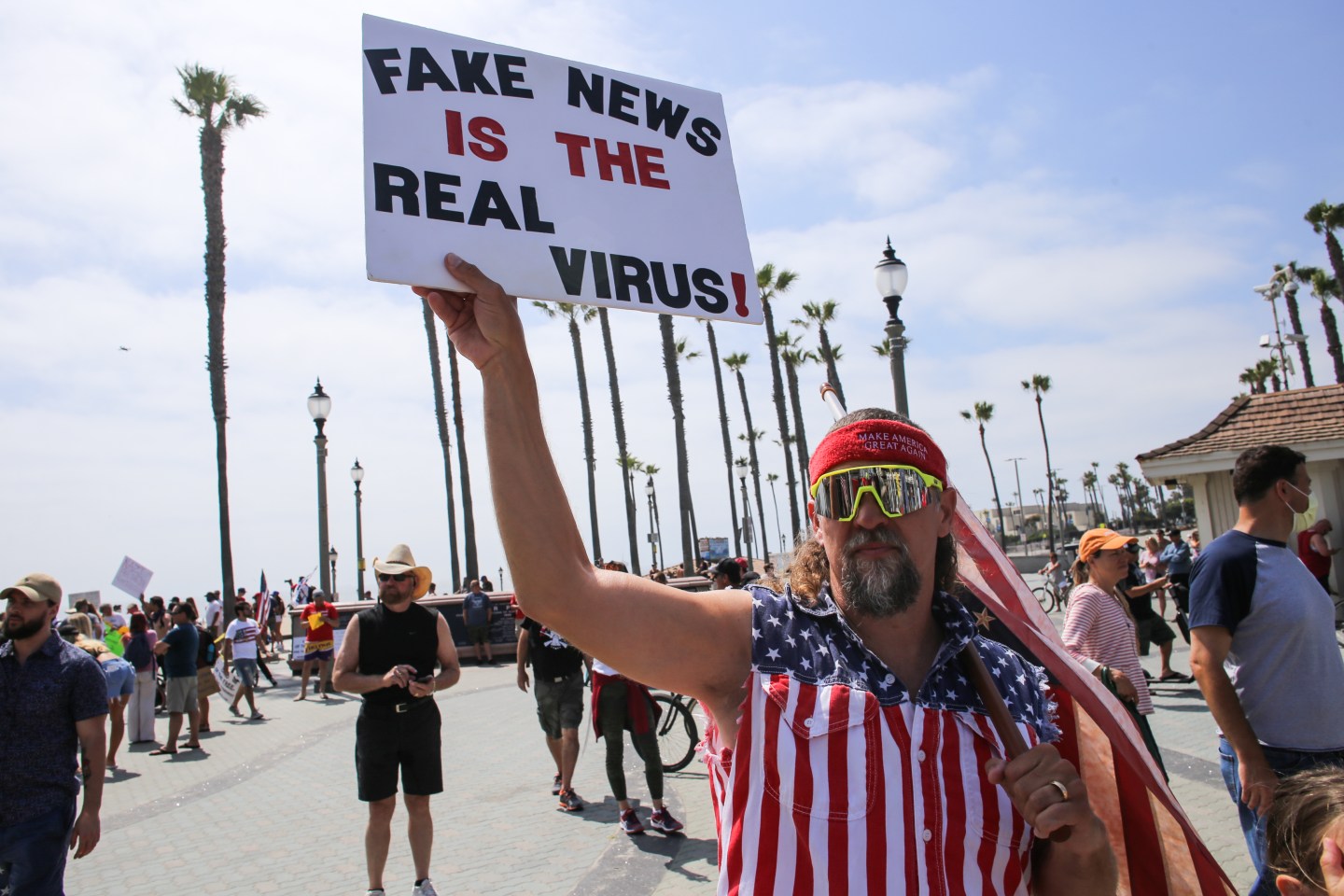 There’s plenty of intrigue around Tuesday’s midterm elections, but this much is certain: Social media will be a nightmare.

News outlets across the country are warning about the imminent deluge of misinformation, disinformation, conspiratorial thinking, and other distortions of the truth that will overwhelm social media. Conventional wisdom goes that Facebook, Twitter, and other platforms were woefully unprepared for the onslaught in 2020, and they remain unequipped to handle the torrent that’s about to hit.

These concerns are generally well founded. The cesspool of political social media continues to operate with scattershot intervention from social media platforms, as the Washington Post, the New York Times, and Bloomberg reported this week.

For all the handwringing among researchers and media members about social media companies undermining democracy, the American people are voting with their eyeballs. Rather than abandoning the platforms that fan the flames of fanaticism, more Americans are spending time on social media than ever before, generating more revenue for companies.

Consider the case of Facebook, arguably the greatest source of political disinformation during the last national election cycle.

In the fiscal quarter before the 2020 election, about 196 million people in the U.S. and Canada used the platform on a daily basis. In the two subsequent quarters, during which the U.S. held an election and witnessed a Facebook-fueled attack on the U.S. Capitol, the platform’s daily active user count held steady at 195 million in the two countries. (Facebook parent Meta doesn’t isolate U.S. data in its quarterly reports.)

Advertisers didn’t seem fazed by the fiasco, either. In the 2020 pre-election quarter, Facebook generated $39 in ad revenue per user in the U.S. and Canada. That number spiked to $51 in the final quarter of 2020, likely due in part to a surge in political ads. But it held steady throughout 2021, when each user generated about $53 in ad revenue for Facebook.

The same principles applied at Twitter, another major source of content moderation angst. Twitter’s monetizable daily active users in the U.S. have held steady at roughly 36 million to 38 million since the third quarter of 2020, while U.S. revenue jumped 45% between the third quarters of 2020 and 2021. Twitter stopped accepting paid political ads in 2019.

By now, Americans are well-versed in the ills of social media—and they simply don’t care enough to abandon it.

What’s more, the Gallup survey showed Americans were virtually split on whether they thought Congress or the tech industry is better positioned to regulate social media content—a dynamic that contributes to Washington’s inaction on tech regulation. Separate Gallup polls suggest Americans rank both institutions among the least-trusted entities in public life.

“Across all [demographic] groups, focus group participants acknowledged that information overload is a drawback to the internet but that it is everyone’s responsibility to ‘do their own research’ to determine fact from fiction,” the report’s authors wrote.

Social media companies might very well be eroding the foundation of our liberal democracy via their free-for-all platforms. But until Americans abandon Facebook, Twitter, and their peers over their content policies, there’s no clear financial case for companies getting down deeper into the political mud.

That escalated quickly. Binance announced Tuesday that it’s acquiring FTX Trading, a blockbuster deal between the world’s two largest cryptocurrency platforms. The purchase follows a liquidity crunch at FTX, precipitated by a CoinDesk report last week about the company’s fragile balance sheet. Binance CEO Changpeng “CZ” Zhao stoked some of the concerns Monday by announcing his intention to liquidate his company’s remaining stash of tokens tied to FTX, prompting the token’s value to plummet about 30%. The acquisition does not include FTX.us, a separate, smaller FTX-owned cryptocurrency exchange based in the U.S.

Charging ahead? Elon Musk and his team leading Twitter have discussed putting the site behind a paywall and shifting toward a subscription-based model, Platformer reported Monday. There are no immediate plans for erecting a paywall, though the idea meshes with Musk’s prior comments about wanting to wean Twitter off ad revenue. In the short term, Twitter likely would struggle to generate anywhere close to $4.5 billion, its ad revenue haul last year, if it implemented a paywall.

Finding a semi solution. Nvidia is producing a lower-performance graphics processing chip for Chinese customers that complies with new U.S. export controls targeting the republic, Reuters reported Monday. The new semiconductor is the first product from a U.S. chipmaker crafted in response to the U.S. trade rules, which are designed to hamper China’s development of advanced technologies. Nvidia has said the export controls could lead to hundreds of millions of dollars in lost revenue.

Life in the slow lane. It’s been a rocky road for electric vehicle startup Rivian, which went from IPO darling to pandemic cautionary tale in just a few months. Fortune’s Simon Willis documented the rise and fall Monday, detailing how a few managerial missteps and many unfortunate circumstances stymied the aspiring Tesla rival. Those issues necessitate a quick U-turn in Rivian’s fortunes, particularly as the company keeps burning cash and legacy automakers funnel billions of dollars into electric vehicle development. Rivian shares are down 69% year to date and 82% off the post-IPO high.

Rivian is far from the only electric car company to suffer this year. An economy beset by high inflation, soaring interest rates, and a looming recession is not friendly to young, cash-hungry firms whose profitability is unproven. Investors have bolted. Lucid, which had its own, much smaller IPO in 2021, is down over 70%. Even Tesla has lost half its value. But Rivian has fallen farthest and fastest. After a high-flying start, it is now at risk of being the Icarus of the EV industry.

So what’s gone wrong at Rivian? Analysts, investors, and former employees describe a promising company tripped up by what one calls a “perfect storm” of problems—including managerial overconfidence, the daunting costs of manufacturing, and the simple bad timing of trying to scale up a business as the broader economy began to stumble.

How a dodgy crypto influencer got rich on YouTube and Twitter—while the platforms and the SEC failed to act, by Leo Schwartz

Everything you need to know about Mastodon, the upstart rival to Elon Musk’s Twitter, by Christiaan Hetzner

Early Twitter investor and Musk pal warns the billionaire is surrounded by ‘yes men’ and is ‘stoking insanity,’ by Sophie Mellor

TikTok is on track to earn $12 billion this year and record labels want a bigger cut of the action, by Olivia Solon, Lucas Shaw, Giles Turner, and Bloomberg

How the demise of MoviePass’s first rendition turned into a scandal, by Jessica Mathews

Why leaders bury their heads in the sand when faced with uncomfortable facts, by Gleb Tsipursky

Gather round the big screen. Get your popcorn ready, because the all-hands meeting might get a little more interesting. The Verge reported Monday that movie theater chain AMC is partnering with Zoom to convert some of its auditoriums into videoconferencing spaces capable of hosting 75 to 150 people. True to form, AMC will offer theater-type accommodations to its corporate guests, including concessions and movie showings. For now, AMC plans a limited release of the pilot. Only 17 major U.S. markets will screen meetings next year, company officials said.