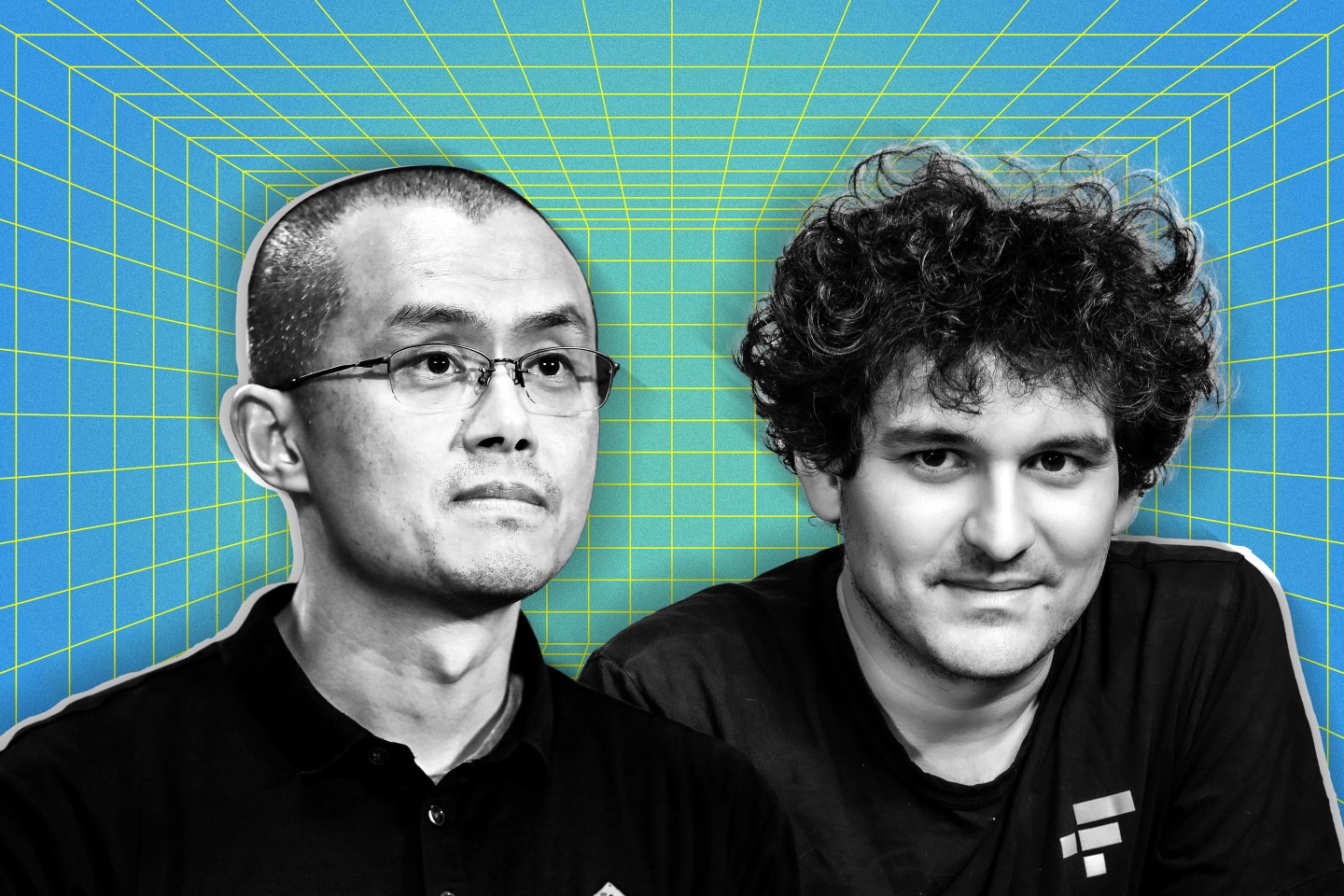 The crypto world turned upside down on Tuesday as the CEO of Binance, Changpeng Zhao (left), announced his company has signed a letter of intent to purchase rival FTX, led by Sam Bankman-Fried (at right).
Ben McShane—Sportsfile for Web Summit/Getty Images; Spencer Heyfron for Fortune

The crypto world turned upside down on Tuesday as the CEO of Binance, Changpeng “CZ” Zhao, announced his company has signed a letter of intent to buy rival FTX. The deal, which comes after CZ feuded openly with FTX CEO Sam Bankman-Fried (SBF) over the weekend, marks the shock collapse of a company that many viewed as the future of crypto, and leaves Binance as the undisputed king of the industry.

Rumors of FTX’s potential implosion had been circulating for 48 hours with some fretting that the company would share the infamous fate of Celsius and Voyager—large crypto firms that blew up unexpectedly in the spring and appeared to raid customer funds in a desperate bid to stay solvent. It appears that won’t be the case as SBF stated that the deal will safeguard customer funds:

These developments appeared to reassure the broader crypto markets as the price of Bitcoin and Ethereum, which had swooned amid rumors of FTX’s potential collapse, shot back up on news of the Binance deal. Meanwhile, Binance’s native token, BNB, has rocketed up nearly 20%, with its market cap now exceeding $60 billion. Prices slumped again, however, on Tuesday afternoon.

Reactions on so-called Crypto Twitter—where the industry shares all manner of news and gossip—came in the form of relief, but also disbelief and admiration for the audacity of Binance’s CEO:

Binance first emerged out of nowhere amid the 2017 bull run, quickly eclipsing onetime crypto king Coinbase to become the largest crypto firm in the world. In Binance’s early days, the company seemed to delight in flouting regulators, hopscotching between countries to avoid costly compliance obligations. More recently, Binance has made a concerted effort to make nice with regulators, hiring former high-ranking IRS and Interpol agents, and pledging to heed rules designed to prevent money laundering and other elicit activities.

Until this weekend, FTX and its CEO—the subject of Fortune’s August cover—were widely regarded as unstoppable. When disaster befell the industry this spring, triggered by the collapse of stablecoin Terra and the failure of giant hedge fund Three Arrows Capital, SBF stepped in to pick up the pieces, acquiring some companies and backstopping others.

But in hindsight it had a hidden weakness—one that CZ ruthlessly exploited. That weakness came in the form of FTX’s sister company, Alameda Research, which SBF used as a trading vehicle, and which held on its balance sheet large amounts of FTX’s native token, FTT.

On Sunday, CZ announced that Binance would dump its holdings of FTT—which it had acquired thanks to being an early investor in FTX—which put pressure on its price. SBF sought to maintain the price of FTT at $22 by selling other assets, but this peg collapsed among massive selling. The CEO reportedly spent days scouring Wall Street for a financial lifeline but, by Tuesday, appeared to have run out of options as demands for withdrawals piled up.

Finally, it should be noted that Binance’s acquisition of FTX is not a foregone conclusion. As one crypto watcher noted, many regulators in the U.S. are suspicious that Binance has ties to China and may block it from acquiring SBF’s empire.

The dust is still settling, but for now there is no doubt that Tuesday’s announcements cap one of the most dramatic few days in the history of crypto.