The Supreme Court could soon transform the digital publishing industry. Will Congress do anything about it? 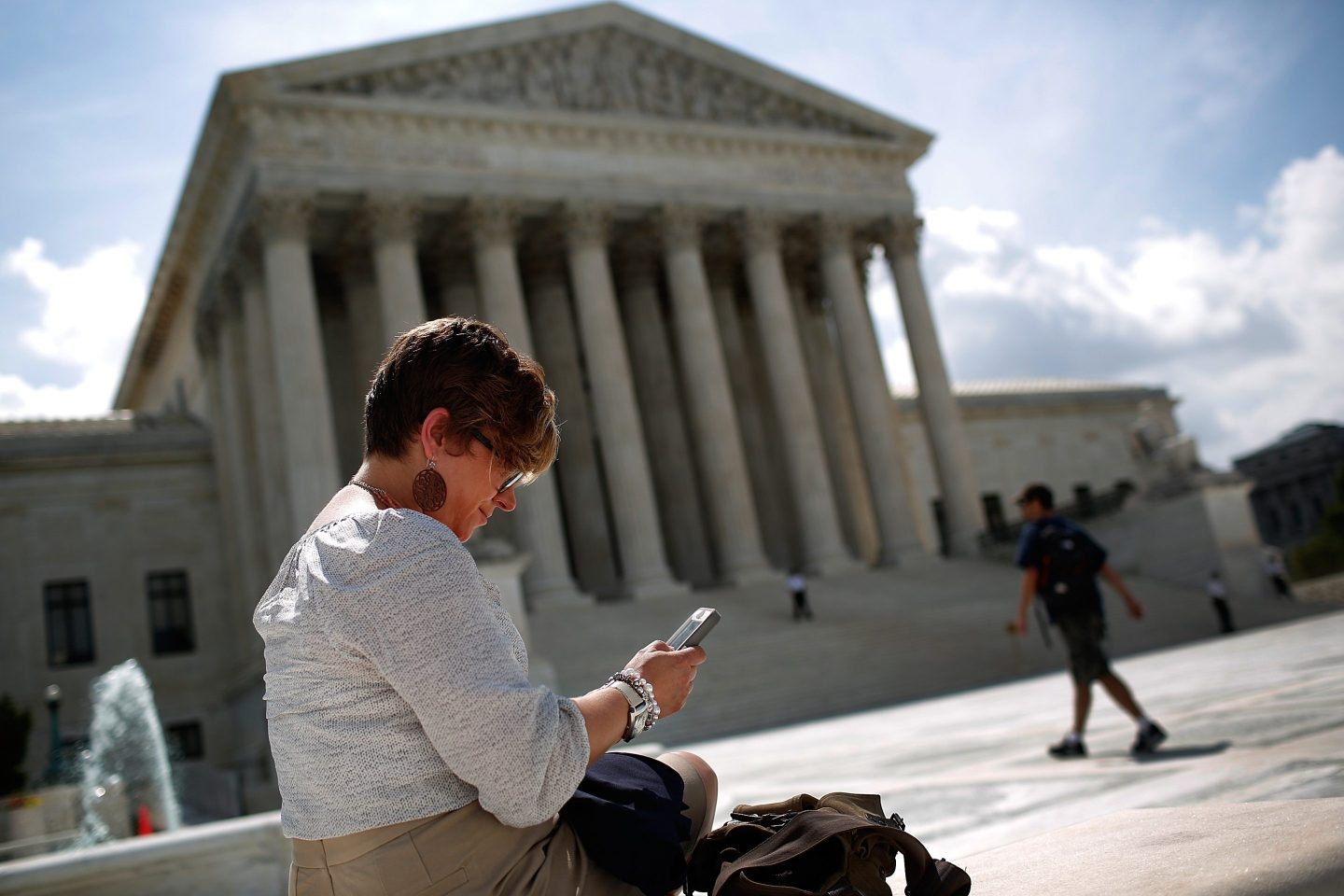 In 1996, during the infancy of the internet, Congress passed a law that said website operators and other online publishers can’t be held liable for content published on their platforms.

In the subsequent 26 years, as the internet morphed into an uncontrollable monster, Congress hasn’t touched the statute, commonly known as Section 230. Instead, the federal legislature has bickered around the edges of the law, tacitly delegating responsibility for applying this broad law to the judiciary.

Congress’s abdication of responsibility has largely benefited tech companies, allowing some of them to grow into the most valuable corporate properties on earth with minimal federal intervention.

The Supreme Court took another step Monday toward upending the social media, digital publishing, and online advertising industries, agreeing to hear a case that could make tech companies liable for harms caused by algorithm-based recommendations. If the highest American court rules against tech firms, the lucrative digital ad business on which Alphabet, Meta, and several other Silicon Valley giants thrive could be forever changed.

The case, Gonzalez v. Google, centers on whether Section 230 legal protections apply to content promoted by digital publishers through algorithmic recommendations. The plaintiff, Reynaldo Gonzalez, alleges that Google bears legal responsibility for radicalizing terrorists through the promotion of ISIS videos on its YouTube platform. ISIS militants killed Gonzalez’s 22-year-old daughter, Nohemi, seven years ago in an attack in Paris.

While Section 230 clearly protects digital publishers from liability when users post illegal, derogatory, or obscene material, the law does not explicitly state (and Congress has not clarified) whether that immunity extends to platforms’ recommendation decisions. If it does not, tech companies could face a flood of lawsuits tied to the millions of recommendation choices they make each day—choices that drive billions of dollars in advertising revenue.

However, tech companies have plenty of reason to worry that the decision won’t stand.

While Google prevailed in appellate court, the victory was hardly convincing. A dissenting judge in the case, Ronald Gould, argued that a strict reading of Section 230 “in no way provides immunity for other conduct of Google or YouTube or Facebook or Twitter that goes beyond merely publishing the post.” The two judges in the majority opinion, Morgan Christen and Marsha Berzon, also wrote that they “share the dissent’s concerns” about overbroad interpretations of Section 230.

The uneasiness expressed by the three judges, all of whom were appointed by Democratic presidents, likely will extend to the Supreme Court’s conservative majority.

In its previous term, the newly empowered majority emphasized strict readings of the law, often to the frustration of liberal critics and fans of pragmatism. Most notably, the court found the Constitution provided no explicit legal basis for a national right to abortion (whether the justices should have disregarded precedent set in Roe v. Wade is another matter). In another major decision, the court ruled that the Environmental Protection Agency couldn’t issue sweeping carbon-regulation rules designed to combat climate change because Congress did not clearly give the agency such authority.

The Supreme Court’s detractors howled that the two decisions reflected a Republican-anointed judiciary run amok. But the rulings also contained an implicit message to Congress: Do your job and pass laws.

The same message could soon get reinforced through Gonzalez v. Google. Common sense would dictate that Google should not be held responsible for every potential harm caused by a recommended YouTube video. But in the absence of clear statutes promulgating such protections, tech companies shouldn’t be surprised when they’re on the losing end of billion-dollar judicial decisions.

“It would be preferable if the political branches of government, the legislature or the executive branch, would seriously grapple with the issue of unregulated social media power being used to amplify or to distort views asserted by users, and sometimes even by hostile nations using social media to wage asymmetric warfare or to impair democracy,” Gould wrote in his dissenting opinion.

“But if Congress continues to sleep at the switch of social media regulation in the face of courts broadening what appears to have been its initial and literal language and expressed intention under Section 230, then it must fall to the federal courts to consider rectifying those errors itself by providing remedies to those who are injured by dangerous and unreasonable conduct.”

Musk wants Twitter back? Elon Musk offered to buy Twitter at his originally agreed-upon price Monday evening, a proposal that could end months of legal wrangling between the two sides, Bloomberg reported, citing sources familiar with the matter. The reported offer came two weeks before Musk and Twitter were set to square off in a Delaware court over the Tesla CEO’s attempt to back out of the $44 billion deal, ostensibly owing to his claims of Twitter undercounting bot accounts on the platform. The reason for Musk’s change of heart isn’t immediately clear, though legal analysts have opined that he doesn’t have a strong case for reneging on the purchase.

Semiconductors in the Empire State. Micron announced plans Tuesday to build a major chip manufacturing plant in upstate New York, with an initial investment totaling $20 billion, Bloomberg reported. The facility, located about 15 miles north of Syracuse, is the latest multibillion-dollar semiconductor production project designed to boost domestic chip output. Micron officials said they could invest up to $100 billion over the next 20 years on the plant, tapping state and federal incentives allocated to the industry.

A jolt to Apple. The European Parliament took another step Tuesday toward approving rules that will require mobile phones to use standardized charging hardware by the end of 2024, TechCrunch reported. The change, approved by the Parliament in a 602–13 vote, would force Apple to abandon its proprietary charging hardware after years of resistance from the iPhone maker. The European Council still must sign off on the legislation, which aims to reduce electronic waste and help consumers more easily charge their devices.

Drawing up success. Patience, persistence, and plenty of Aussie ingenuity have transformed Canva into the world’s highest valued female-led startup. As Fortune’s Emma Hinchliffe reported Tuesday, Canva cofounder and CEO Melanie Perkins has tenaciously built the outfit, estimated to be worth $26 billion, from a fledgling high school yearbook company to a visual communications giant with 90 million users. Perkins and her husband, two of the company’s three cofounders, said they endured more than 100 rejections from venture capitalists in their quest to raise money for Canva. Now, they’re raking in about $1 billion in annual revenue, turning a profit, and hoarding $700 million in cash—though questions still persist about whether Perkins is the right leader to take Canva public.

Canva’s next deck may be a tougher one to design. Many investors cut its valuation substantially in July as the tech sector wobbled. In the long run, analysts say, Canva must amass even more paying customers, making its push into professional tools even more urgent.

But that means taking on the incumbents of the $47 billion productivity management software market—giants in their own right—and whether Perkins’s startup can go toe-to-toe with them is unclear. Canva built its business on a “freemium” subscription model that could sustain a graphic design company—but is it enough to support the next Adobe?

Melinda French Gates is investing $1 billion of her own money for women in the United States. Here’s an inside look at her game plan, by Michal Lev-Ram

The SEC’s Kardashian fine was a dumb publicity stunt, by Jeff John Roberts

How cloud tech for gaming is being applied to health care, by Kristine Gill

Twitter texts released in court case reveal Elon Musk’s ex-wife asked him to ‘Please do something to fight woke-ism,’ by Dana Hull, Lisa Fleisher, and Bloomberg

Your smartphone is still ruining the planet, but there may be a more sustainable solution, by Abigail Bassett

The powers that be. Big Tech had a decent showing in Fortune’s annual list of the world’s most powerful women—but it still lags behind other industries at the very top of the ranking. Tech executives snagged 11 of the 50 spots on the list, which debuted Tuesday, yet the women of Silicon Valley were shut out of the top 10. Leading the pack for the tech industry: Alphabet and Google CFO Ruth Porat (No. 12), Microsoft CFO Amy Hood (No. 15), Oracle CEO Safra Catz (No. 19), and YouTube CEO Susan Wojcicki (No. 20). The 25th anniversary of the list marked the first time that Fortune has combined the international and domestic versions of the rankings. To view the full rundown of honorees, click here.