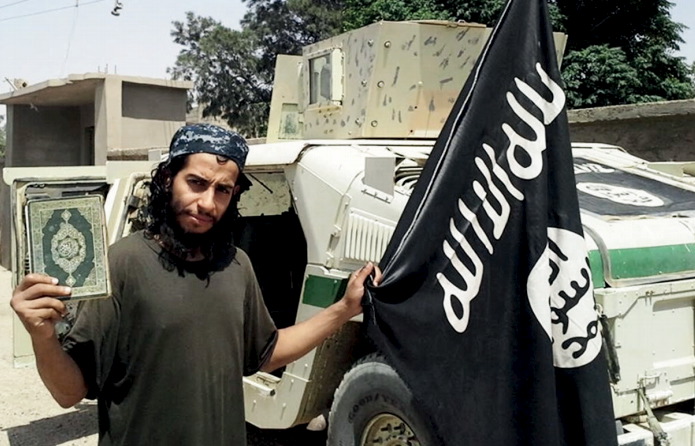 An undated photograph of a man described as Abdelhamid Abaaoud that was published in the Islamic State's online magazine Dabiq and posted on a social media website. A Belgian national currently in Syria and believed to be one of Islamic State's most active operators is suspected of being behind Friday's attacks in Paris, acccording to a source close to the French investigation. "He appears to be the brains behind several planned attacks in Europe," the source told Reuters of Abdelhamid Abaaoud, adding he was investigators' best lead as the person likely behind the killing of at least 129 people in Paris on Friday. According to RTL Radio, Abaaoud is a 27-year-old from the Molenbeek suburb of Brussels, home to other members of the militant Islamist cell suspected of having carried out the attacks. REUTERS/Social Media Website via Reuters TVATTENTION EDITORS - THIS PICTURE WAS PROVIDED BY A THIRD PARTY. REUTERS IS UNABLE TO INDEPENDENTLY VERIFY THE AUTHENTICITY, CONTENT, LOCATION OR DATE OF THIS IMAGE. FOR EDITORIAL USE ONLY. NOT FOR SALE FOR MARKETING OR ADVERTISING CAMPAIGNS. FOR EDITORIAL USE ONLY. THIS PICTURE WAS PROCESSED BY REUTERS TO ENHANCE QUALITY. - RTS7CLF
Photograph by Reuters

The family of a victim of the Paris terrorist attacks in November of last year filed suit this week against Twitter, Google, and Facebook, claiming that the platforms have “knowingly permitted the terrorist group ISIS to use their social networks as a tool for spreading extremist propaganda.” The suit describes this as “material support” for terrorism, saying that without social media, the growth of ISIS “would not have been possible.”

The lawsuit (which can be read in full here) was filed by Reynaldo Gonzalez, whose daughter Nohemi Gonzalez was a student at California State University, Long Beach, spending a semester abroad last fall. As described in the suit, she was eating at a restaurant on the Rue de Charrone when gunmen attacked, killing her.

The suit claims the accused companies provided “provision of material support to ISIS” that “was a proximate cause” of the suffering of Reynaldo Gonzalez after his daughter’s death. It outlines multiple instances of fundraising and publicity campaigns conducted via social media.

However, an array of legal experts interviewed by Ars Technica say that the suit has little chance of moving through the courts. Section 230 of the Communications Decency Act, enacted in 1996, establishes that user-generated content on digital platforms cannot be used in proceedings against the platforms. That provision, according to the Electronic Frontier Foundation, has been crucial to the growth of everything from YouTube (GOOG) to blog comments.

A case making a similar argument in connection to the death of a U.S. contractor in Jordan was rejected by a federal judge on Wednesday.

How Terror Unfolds in a Connected Age

According to the new suit, ISIS controlled an estimated 70,000 Twitter accounts, “at least 79 of which were ‘official.’” Despite what appears to be open-ended legal protection, Twitter has recently accelerated efforts to quash terrorist dialogue, suspending 125,000 accounts since the middle of last year. In a statement earlier this year, Twitter said it has worked to “strike a balance” between freedom of speech and opposing terrorism.