How Terror Unfolds in a Connected Age 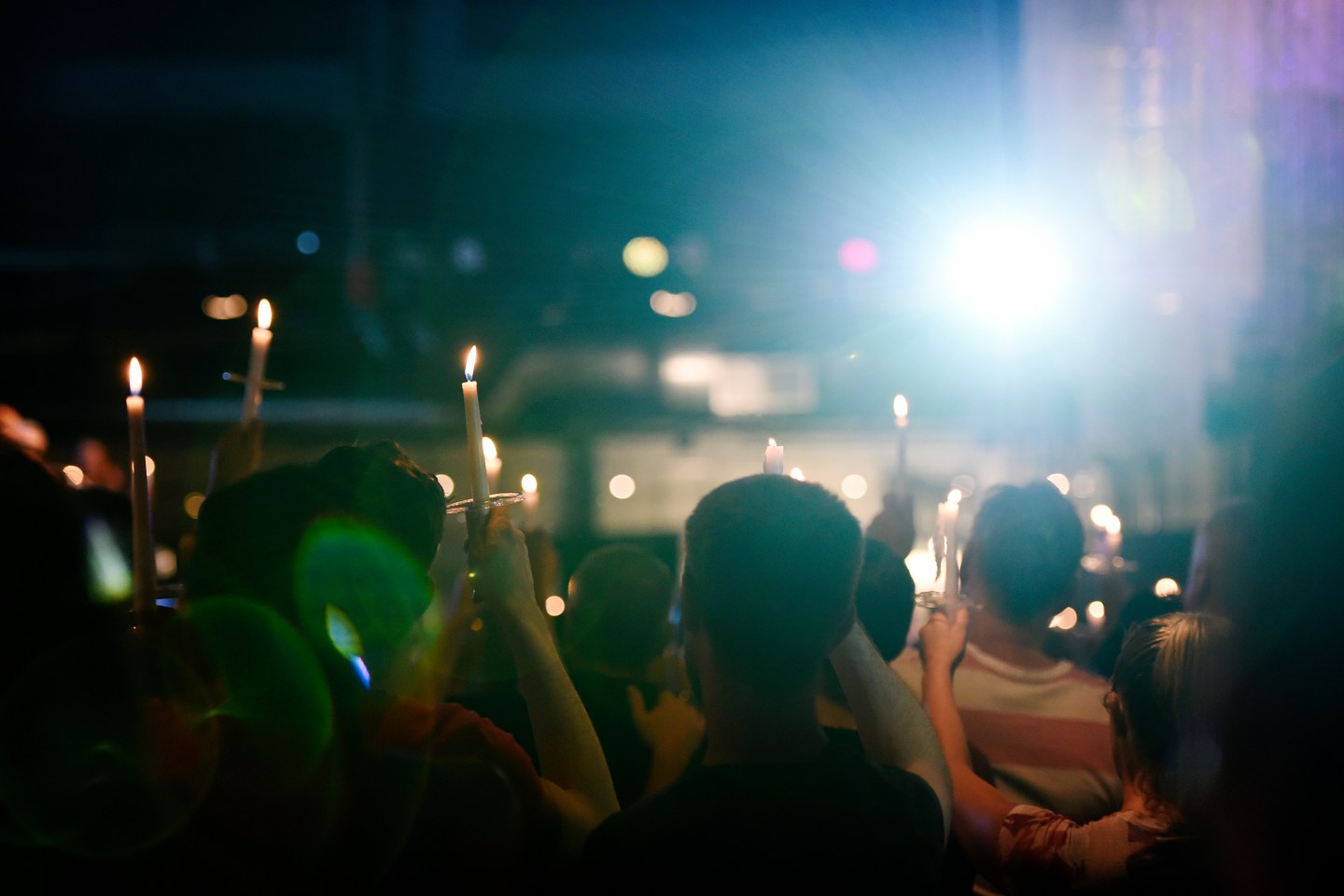 DENVER, CO - JUNE 12: People holds their candles high as speakers address a full room of supporters during a vigil for the Orlando shooting victims. Denver community members gathered in support of the victims of the Orlando nightclub shooting in the early morning hours on Sunday, June 12, 2016. (Photo by AAron Ontiveroz/The Denver Post via Getty Images)
AAron Ontiveroz — Denver Post via Getty Images

It is already the worst mass killing in American history. With the perpetrator reportedly pledging allegiance to ISIS, it may also emerge as the worst U.S. terrorist attack since 9/11. And last night’s horrific shooting at a gay nightclub in Orlando unfolded across the social media and communication technology that now suffuse our lives.

Moments after a gunman opened fire, the Pulse nightclub posted a dire warning to its Facebook page: “Everyone get out of pulse and keep running”.

Cell phones gave those outside the nightclub a channel to the unfolding events—for better or worse. One terrified mother received a series of texts from her son, trapped in a bathroom as the gunman advanced. That victim’s fate is not currently known.

Other tweets apparently came from witnesses still inside the club (many now deleted), and those who escaped chronicled the aftermath.

Thank youu i jumped out theres people still hiding inside the closets that the shooters dont know theyre in there https://t.co/NoOIud4Hxe

I'm finally out of the police station. They are keeping everyone's car until tomorrow because they are too close to the crime scene.

I am still shaking. 3 of my friends are still missing. I can't stop crying and I hope that everything it's okay. We were there to have fun!

A Snapchat video, taken by stunned bystanders and unearthed by the Daily Mail, captured the sounds of a hail of semiautomatic gunfire.

Meanwhile, Facebook activated its Safety Check feature to help users locate friends and loved ones who may have been in danger.

Orlando police provided frequent updates as the event unfolded, including its grisly conclusion.

Pulse Shooting: The shooter inside the club is dead.

In the aftermath of the shooting, social media have become an outlet for expressions of collective anguish and despair, with citizens and heads of state alike using the hashtag #prayersfororlando.

eyes are filled with tears. waking up to this news is so heartbreaking & horrifying. prayers for Orlando & all those affected :(

We stand with our American neighbours in the face of this senseless act of terror. Prayers for all in #Orlando

Some have used the occasion to press their political agendas, including sentiments on both sides of the gun control debate.

Dear God:
Today I am so sickened by the evilness of the NRA and gun industry. May their leaders be plunged into ever-lasting hell.
Amen

A few have attacked homosexuals.

"I swear to Allah the look of fear in gays eye makes my heart happy, May Allah humiliate them. #OrlandShooting " pic.twitter.com/y6BJiNFf79

They were joined, in what may have been a case of bad timing, by Texas Lieutenant Governor Dan Patrick.

It is also likely that social media played a role in the initial radicalization of the shooter, currently identified as Omar Mateen, a 29 year old U.S. citizen. Platforms like Twitter (TWTR), Facebook, and YouTube (GOOG) have become a major source of concern for law enforcement and military forces, as tech-savvy organizations like ISIS use them to mobilize sympathizers across borders.

In the coming days and weeks, it seems certain that those same platforms will help those in America and around the world understand what happened, debate its implications, and, perhaps, begin to heal.