Supreme Court overturns Roe v. Wade in historic but anticipated reversal: ‘This is an invasion of a woman’s body’ 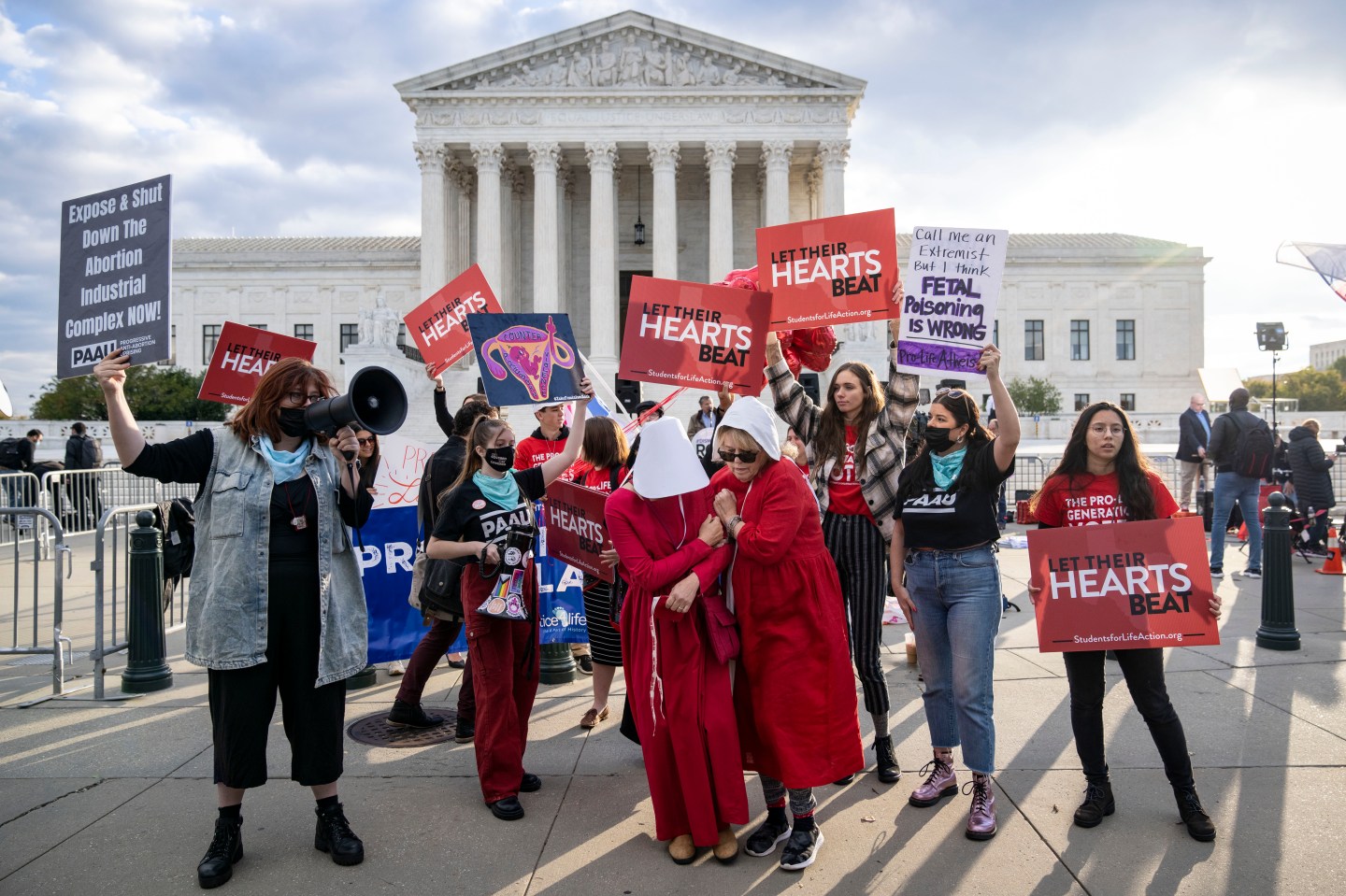 The Supreme Court has voted to overturn Roe v. Wade, the 1973 decision that legalized abortion nationwide, and Planned Parenthood v. Casey, a 1992 decision that upheld it, in a historic yet anticipated reversal.

The right to an abortion is now left to individual states.

“The Constitution does not confer a right to abortion … and the authority to regulate abortion is returned to the people and their elected representatives,” Justice Samuel Alito wrote in the decision, Dobbs v. Jackson Women’s Health Organization, released Friday.

“It is time to heed the Constitution and return the issue of abortion to the people’s elected representatives.”

Justices Breyer, Sotomayor, and Kagan filed a dissenting opinion “with sorrow—for this Court, but more, for the many millions of American women who have today lost a fundamental constitutional protection.”

The Friday decision “says that from the very moment of fertilization, a woman has no rights to speak of,” they wrote. “A state can force her to bring a pregnancy to term, even at the steepest personal and familial costs.”

President Joe Biden called Friday “a sad day for the court and the country,” the Associated Press reported.

“Now with Roe gone, let’s be very clear, the health and life of women across this nation are now at risk,” he said in an address from the White House. “The court has done what it’s never done before—expressly taking away a constitution right that is so fundamental to so many Americans.”

“We stand ready to work with other arms of the federal government that seek to use their lawful authorities to protect and preserve access to reproductive care,” he said.

Garland noted that the Food and Drug Administration has approved the use of mifepristone, a drug used to end pregnancies, and said states cannot ban the drug “based on disagreement with the FDA’s expert judgment about its safety and efficacy.”

Anita Hill—the chair of the Hollywood Commission, an organization that works to stop discrimination, harassment, and abuse in the entertainment industry, and a professor of social policy, law, and women’s studies at Brandeis University—said the decision will do “immeasurable harm now and into the future,” in a statement provided to Fortune.

Hill testified before Congress in 1991 about the sexual harassment she said she experienced while working as an aide to Clarence Thomas, a Supreme Court Justice who once supervised her at the Equal Employment Opportunity Commission.

The hardships caused by Friday’s decision “are likely to fall most heavily on pregnant individuals who are low income, people of color, and who live in rural communities,” she said.

Businesses can “show support for their workforce members by calling for legislation that supports reproductive liberty” and making sure that workers “have the resources and accommodations they need to continue doing their jobs,” she added.

Hundreds gathered outside the Supreme Court on Friday after the ruling was issued, some changing “legal abortion on demand” and “this decision must not stand,” the AP reported. Others shouted, “The Supreme Court is illegitimate.”

“Women will die,” Suzanna Sherry, a professor at Vanderbilt Law School, told Fortune on Friday when asked for her reaction to the ruling.

“It throws out almost a half century of approach to constitutional interpretation and basically says that if there was any practice of forbidding an activity at the time of ratification, that practice can be forbidden,” he said.

The ruling has devastating consequences “for people of marginalized communities, people of color, Black people, women—who were not recognized as full human beings under the original Constitution,” he added.

Dr. Georges Benjamin, executive director of the American Public Health Association, called the ruling a “full employment opportunity for lawyers, on the legal side, and on the humanistic side, for women, a real travesty.”

The decision will lead to confusion and legal grey areas, he said, citing a situation where a woman lives in Texas but goes to visit her mother in Maryland, where she obtains and takes a so-called morning-after pill. The abortion doesn’t go as planned, however, and she finds herself in need of a dilation and curettage (D&C) procedure to remove the fetus when she returns back home to Texas.

“Can you get it done in Texas?” he asked. “What happens if you need an abortion for a miscarriage in process? Can they do that? At what point does does an OBGYN intervene? A fetus has a viable heartbeat but is going to be expelled. The woman’s bleeding out. How do you manage that medically? What do you do with an ectopic pregnancy, a pregnancy that’s not viable and a women’s life is at risk. Is that an exception?”

MORE: The best way to talk to employees about Roe v. Wade and not screw it up, according to a top CEO and communications adviser

The move to oveturn Roe was expected after bombshell reporting by Politico in May that revealed the court had already voted to overturn the decision, citing a leaked draft majority opinion by Alito that had circulated among members.

Jennifer Hendricks, a University of Colorado Law School professor, told Fortune in May that she was “shocked by the utter dismissiveness with which the court treats women’s bodies.”

“It was clear that this was coming,” she said of the overturn, calling it “the biggest non-scoop in history.”

“But it’s also so unprecedented for a draft to be leaked.”

Hendricks said the draft opinion contains a “remarkable level of contempt for women,” adding, “This is an invasion of a woman’s body to force her to carry a pregnancy to term.”

Josh Wilson, professor and chair of the political science department at the University of Denver in Colorado, told Fortune in May that conservative justices were “searching for a way to get at overturning Roe.”

“It’s really remarkable,” he said. “There’s been this discussion of, ‘We have this conservative supermajority. What will they do about abortion?’ It seemed like they would continue with some sort of chipping away at abortion access, versus going directly at it.”

On May 11 the Senate came up short in a rushed effort to enshrine the right to legal abortion into federal law. A 51-49 nearly party-line vote failed to end the Republicans’ filibuster blocking the proceeding. Sixty votes were needed to move ahead, The Associated Press reported.

Republicans “have chosen to stand in the way of Americans’ rights to make the most personal decisions about their own bodies, families, and lives,” Biden said in response to the vote, according to the AP, urging pro-choice voters to show up at polls in November and favor like-minded candidates.

As of early June, 26 states were “certain or likely” to ban abortion in the absence of Roe, according to the Guttmacher Institute, a research organization seeking to advance reproductive health rights. Thirteen of those states had “trigger laws” that would almost immediately halt legal abortions, and more than a quarter of abortion clinics in the U.S. could close as a result, according to a new study.

Sixteen states and D.C. had laws that protect the right to abortion—some prior to viability of the fetus and others throughout pregnancy, according to the institute. States with laws to protect abortions as of June 1 included California, Colorado, Connecticut, D.C., Hawaii, Illinois, Maine, Maryland, Massachusetts, Nevada, New Jersey, New York, Oregon, Rhode Island, Vermont, and Washington.

This is a developing story and will be updated.