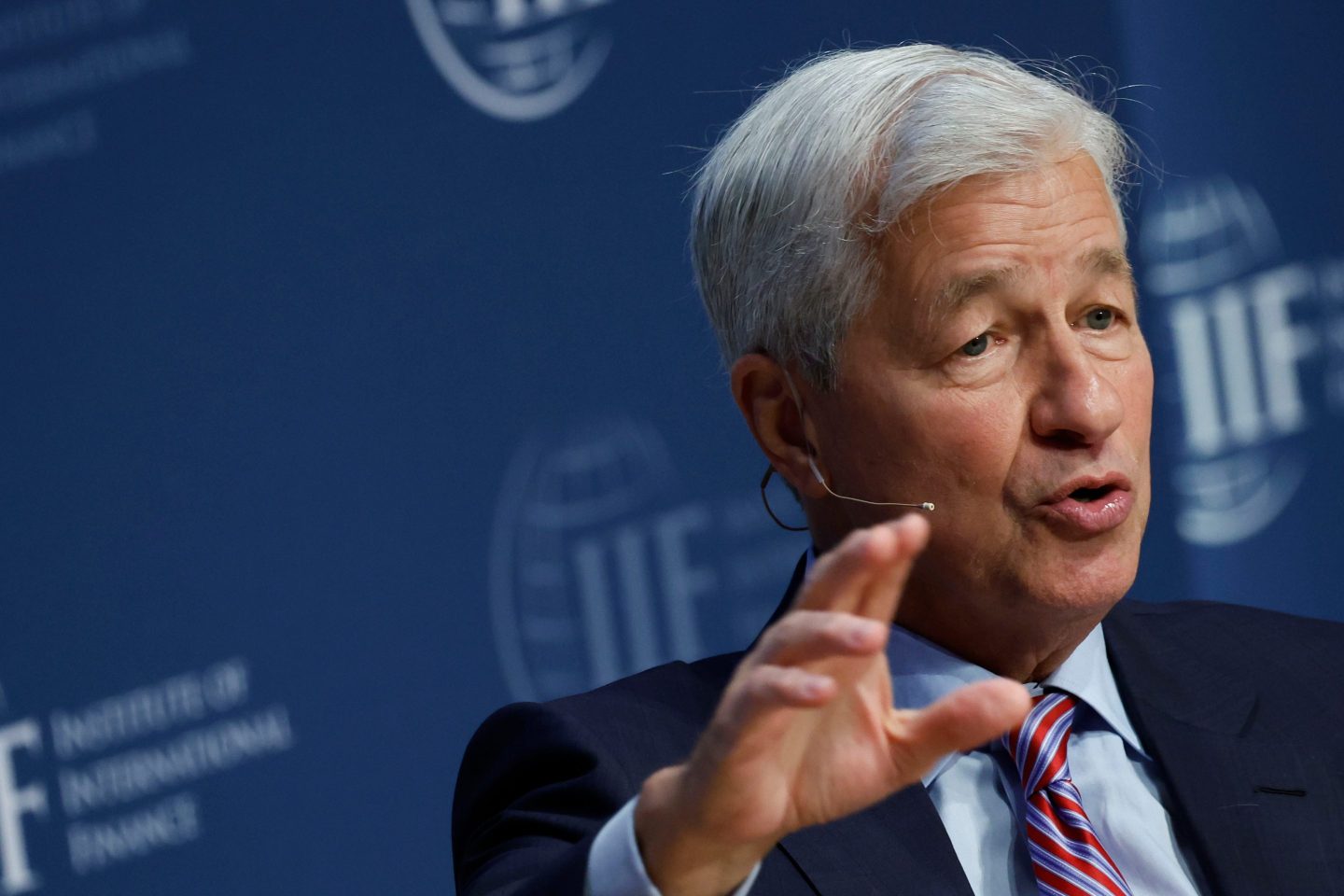 JPMorgan Chase CEO Jamie Dimon thinks a recession will hit the U.S. in the next six to nine months. He's not alone.
Ting Shen—Bloomberg/Getty Images

Americans, like people all over the world, are worried a recession is right around the corner.

Elevated inflation, rising interest rates, post-COVID shockwaves, and the war in Ukraine are all continuing to weigh on the global economy, stoking fears that a major downturn is imminent (if it hasn’t already arrived).

According to investment research firm Ned Davis Research, there is a 98.1% chance of a global recession some time in 2023.

While a string of prominent business leaders and economists have warned the U.S. a recession is looming, some have argued America is already in one.

Here are three reasons why many executives, analysts and investors think the U.S. is on the verge of a recession—and one reason why the world might scrape by.

The textbook definition of a recession is when an economy contracts for two straight quarters.

By this definition, the United States entered a technical recession in the summer, when government data confirmed that gross domestic product (GDP) had seen negative growth in the first half of the year.

Last week, Tesla CEO and world’s richest man Elon Musk said he believes we’re already in a recession, predicting the downturn would last until the spring of 2024—putting the U.S. economy on track for a longer period of negative growth than it went through during the global financial crisis.

It’s a view that’s shared by a majority of Americans. A September survey by Cinch Home Services found that 76% of people living in the U.S. believe the country is already in a recession.

Ark Invest CEO Cathie Wood has also been arguing for several months that the U.S. is already in a recession, saying in an interview with Yahoo Finance this month that the downturn will be sustained.

Meanwhile, Amazon founder Jeff Bezos said last week it was time to “batten down the hatches” and brace for a recession.

However, the U.S. National Bureau of Economic Research—which defines a recession as a significant decline in economic activity that is spread across the economy and lasts more than a few months—considers several areas of economic activity as potential recession signifiers, including real personal income, non-farm payroll employment, and industrial production.

Many of those metrics are still looking strong, and GDP itself made a sharp recovery and returned to growth in the third quarter.

Maurice Obstfeld, a former chief economist at the IMF who also served in President Obama’s Council of Economic Advisers, told Fortune the U.S. was not yet in a recession, noting the “respectably strong” GDP growth seen in the third quarter.

“A true recession requires all of ‘the three Ds’: depth, diffusion, and duration, and with the labor market still strong, at least one of these—diffusion—clearly is absent,” he said. “As the Fed keeps raising interest rates, however, a recession in 2023 becomes more likely.”

J. Bradford DeLong, an economics professor at UC Berkeley who served as deputy assistant secretary of the Treasury under President Bill Clinton, also told Fortune there were no signs the U.S. is in a recession right now.

“Employment continues to grow, there are no signs of a weakening in labor demand that would herald a decline in wage inflation,” he explained, also pointing to the GDP growth seen in the third quarter. “That said, the odds are 50-50 that the U.S. will be in a recession in twelve months: the Fed has done a lot of monetary and financial tightening that has not yet affected production and employment, although there are some signs it is beginning to affect demand.”

2. The Fed is raising rates—fast

Although the economy grew between July and September, inflation hovered around 40-year highs as the Federal Reserve struggled to rein in soaring consumer prices.

In a bid to bring inflation under control, the Fed has tightened its monetary policy, ramping up the unwinding of its $9 trillion balance sheet in recent months while carrying out a string of interest rate hikes.

But inflation is still way higher than the central bank’s 2% target. In September it accelerated once again, with consumer prices rising 8.2% from a year earlier.

Back in July, Fed Chair Jerome Powell said he did not believe the U.S. was in a recession because too many areas of the economy were performing well. The labor market in particular was strong, he noted—and according to the latest U.S. jobs report, unemployment is still at a half-century low.

Many top economists have warned, however, that the Federal Reserve could cause “all kinds of trouble” by tightening too fast in its battle to tame inflation, with Powell himself cautioning that the Fed must “bring some pain” to households and businesses to achieve its objectives.

Financial markets have already been subjected to some of that pain this year, with tighter monetary policy helping induce a bear market. The S&P 500 has shed around 20% of its value so far this year, while the Dow Jones Industrial Average and the tech-heavy Nasdaq Composite are down 12% and 30% respectively.

JPMorgan Chase CEO Jamie Dimon predicted last week that a recession would hit the U.S. within six to nine months, with the Fed’s rate hikes playing a significant role in the downturn.

For investors, the anticipated tough times have already taken hold, according to Saba Capital founder Boaz Weinstein, who recently warned there was “no reason that this difficult [economic] period will only last two to three quarters [and] no reason to think we’ll have a soft landing or a shallow recession.”

“There isn’t a rainbow at the end of all this,” he said, pointing the finger at the Fed and other central banks’ quantitative tightening programs.

Another major risk weighing on the U.S. economy is the geopolitical landscape—particularly a decoupling from China that appears unlikely to ease anytime soon.

On Tuesday, JPMorgan’s Dimon told an audience in Saudi Arabia that the relationship between Washington and Beijing was a major concern.

“The most important thing is the geopolitics around Russia and Ukraine, America and China, relationships of the western world,” he said. “That to me would be far more concerning than whether there’s a mild or slightly severe recession.”

Both the U.S. and China are facing their own major economic challenges right now, which according to Desmond Lachman, a former IMF official and senior fellow at thinktank the American Enterprise Institute, could have serious consequences.

“In the aftermath of the 2008 Lehman bankruptcy, China played a crucial role in enabling the world economy to recover…by providing an extraordinary amount of budget and monetary policy support to its economy,” he said in a recent op-ed. “Today, unlike in 2008, the Chinese economy is in no position to ride to the U.S. economy’s rescue. Worse yet, there is reason to fear that by further disrupting the global supply chain, China could add to the current U.S. inflation problem.”

If Americans—from investors to corporate leaders to the public—don’t believe the U.S. is already in the midst of a recession, they’re probably expecting one to hit in the near future.

According to the latest Allianz Life study, 62% of Americans are worried that a major recession is right around the corner, while 90% of CEOs are worried about a recession within the next year, with half already planning layoffs.

The U.S.—the world’s largest economy—will play a pivotal role in determining exactly how any coming recession plays out for the rest of the world.

However, thanks to strong consumer spending—even in the face of rising inflation—as well as Americans’ rising net worth during the pandemic and the Biden administration’s major investments in infrastructure and post-COVID recovery, many areas of the U.S. economy are still on stable form.

Goldman Sachs told Fortune earlier this week that it saw just a 35% chance of a recession thanks to a “unique” rebalancing of the U.S. labor market.

The White House, meanwhile, has insisted the U.S. is strong enough to avoid a recession altogether, pointing to the resilience of the labor market and the business investment landscape.

“We are in a stronger position than…frankly, any other country to navigate through this transition without having to give up those gains,” Brian Deese, Biden’s top economic adviser, told the Financial Times over the weekend.

Deese’s comments haven’t convinced markets that the odds are stacked in America’s favor, though. As one analyst recently told Al Jazeera: “All bets are off” for the foreseeable future.