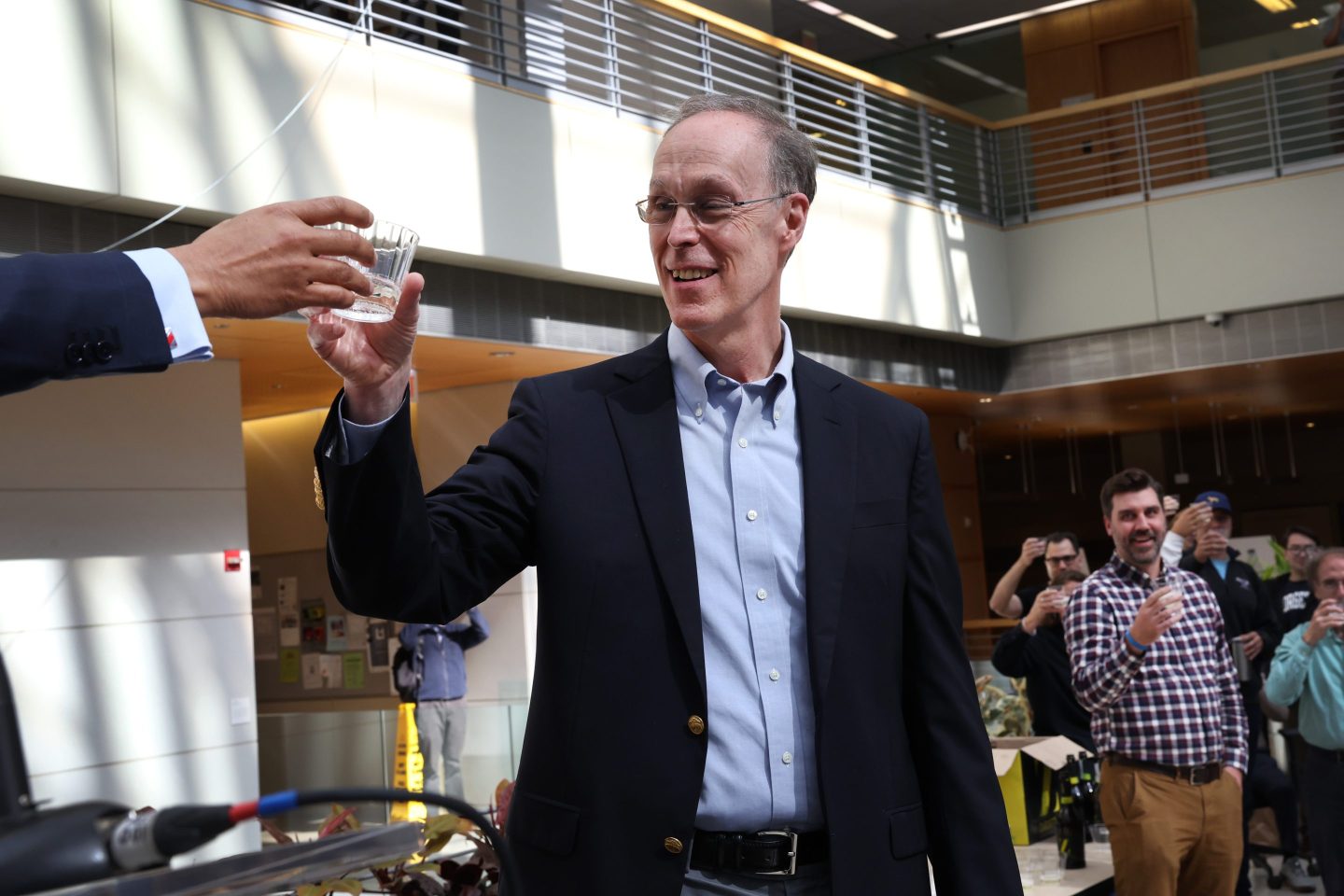 University of Chicago professor Douglas Diamond is toasted by students and faculty shortly after learning he had won the Sveriges Riksbank Prize in Economic Sciences.
Scott Olson / Staff

The University of Chicago has long been known for its roster of distinguished economists, including Douglas Diamond, who just shared the Nobel Prize in Economics with former Fed Chair Ben Bernanke and Diamond’s frequent collaborator, Philip Dybvig of Washington University in St. Louis. Since Diamond’s a specialist in the economics of banking, I wanted to get his view on the inflationary surge and the Fed’s desperate race to tame it. On Oct. 11 we spoke at length by phone. Diamond quickly noted that central bank’s moves do exert a huge impact on the lending ecosystem. And he expressed strong opinions on what he regards as the Fed’s big recent mistakes in promoting easy money, and the potential perils of tightening too fast in its quest to tame the raging consumer price index.

“One of the Fed’s reasons for existing is to promote financial stability,” he told me. “But when the Fed moves real and nominal rates around, that has a spillover effect on financial institutions and their borrowers that the Fed better not ignore. The Fed left rates too low for too long with no spinouts going around the track. Now, they have to ease on the brakes. But if they slam on the brakes, they will cause a crash.”

The research that won Diamond the Nobel

Diamond secured the prize for his research on banks’ role in society, and how the model that makes these essential institutions so valuable also renders them vulnerable, requiring that governments and their own internal practices assure the public that the system is supersafe. Banks receive deposits from customers and channel that money into often long-term loans for everything from new factories to mortgages. As Diamond showed in a paper with Dybvig, that process is much more efficient than the scenario in a nonbanking world where folks invest directly in projects that take years to complete. Why? Because every time people need money on short notice, they would pull funds out of that investment, and bring the fab or housing development to a halt.

The banks solve that problem by keeping plenty of funds in reserve so that their depositors can withdraw money at will for day-to-day needs, and transferring their cash to fund multiyear investments that drive growth. But the system, Diamond stated, works only if people are confident it will keep working. It’s inherently vulnerable to rumors and frenzies. Because so much of all deposits are tied up in loans that aren’t coming due for years, banks can’t return most of customers’ deposits if they panic and demand payment right now. If word spreads that banks might fail, the depositors will rush to take out their money, causing a collapse when the institutions were really solvent.

Diamond stressed the importance of government-backed deposit insurance that guarantees the safety of the depositors’ money and greatly lessens the banks’ innate fragility. He also found that by diversifying their loan portfolios, banks raised the safety and lowered the costs of transforming savings into productive investment. His models showed that by monitoring that their borrowers are using the loans responsibly (for example, how lenders check the progress of real estate developments, and advance more money for the next phase only when the past one is successfully completed) banks served as watchdogs preventing fraud and waste. As the National Bureau of Economic Research stated after the Nobel announcement, Diamond’s and Dybvig’s “insights form the basis of modern bank regulation.”

Diamond observes that a combination of questionable monetary and fiscal policy kept rates artificially low for an extended period that was bound to end—maybe in grief. “The government policymakers thought that they could create as much debt as they wanted without causing inflation or pushing up rates,” he told me. “Some foolish economists pushed the same crazy idea known as ‘modern monetary theory.’ It says that when real ‘rates’ of interest [rates adjusted for inflation] are zero, you can borrow all you want for a long time. The Fed created money to purchase the bonds issued by the Treasury, and all the easy money held rates at zero.” He says that setting rates too low and running large deficits are both inflationary separately, and combined, send prices soaring on steroids. “If policymakers think real rates will stay at zero, they’ll do things to push them off of zero. High deficits and zero rates ensure that inflation will eventually go up,” says Diamond. Then the Fed will be forced to substantially raise rates to battle the inevitable outbreak, just what we’re witnessing today.

The rapid increases in the Fed funds rate that, in turn, are driving yields far higher on everything from two-year Treasuries to junk bonds, will hit our financial system with an unusually strong shock. “We went through a vast period starting in 2011 when rates were extremely low,” he says. “Zero real rates, putting the cost of borrowing at or lower than inflation, were tremendously stimulative to borrowing. People thought that the era of super-low rates would continue. That led borrowers to believe that it’s very safe to finance themselves by rolling over short-term debt, always at the same rates. Why buy ‘insurance’ on a big rise in rates that will never happen? In the past, companies typically protected themselves against spikes by locking rates for a long time. This time, the thinking was, if you don’t think they’re going up, stay with cheap short-term rates.”

The rate jump that blindsided borrowers, says Diamond, will hammer them with unforeseen losses. “The government’s interest expense will go way up, but the Treasury can keep issuing new bonds to cover the increase,” he declares. “It’s the private sector that’s vulnerable. High-yield and leveraged-loan debt that exploded in the last few years is mostly at floating over Libor [London interbank offered rate], and when current rates rise, interest costs to borrowers go way up, and do so suddenly.” Hence, many companies will face much higher interest expense that will erode profits, both on that variable debt and other short-term borrowings they viewed as such a great and enduring deal.

What about the institutions that made the loans? The risk is different for huge banks that finance loans via deposits than for their customers, says Diamond. “The major banks are well-hedged against interest rate shifts,” he says. “The problem is that once rates rise fast, some of their borrowers can’t repay the loans and default, forcing the banks to write down the loans on their books.” He’s especially concerned about the likes of hedge funds, mortgage companies, and other nonbank lenders that sell securities on the capital markets to fund their loans. “This could cause trouble not only for the corp borrowers and big banks, but for nonbank institutions that followed a similar course.”

The Fed risks tightening too hard

Given the situation it created, says Diamond, the Fed had no choice but to substantially raise rates. “The Fed has been doing much better lately,” he says. “They can continue to raise rates. That will be the right thing to do.” But he revives a warning from Milton Friedman. “I worship Milton Friedman,” says Diamond. “He had a famous quote along the lines that ‘Fed policy has long and variable lags.'” Channeling Friedman, Diamond says that in a subsequent period, raising rates can actually boost inflation in the short term, by such effects as swelling the cost of home loans. Diamond believes that to conquer inflation, the Fed must achieve a significant “real” margin on the Fed funds rate and all maturities of government bonds. “If the ‘neutral’ real rate that in the long term gets to the Fed’s 2% inflation goal is 1%, we need a higher real rate now to curb inflation,” he says. “We’d need a real rate of at least 2% or even 3%.”

Right now, “core” inflation using the Fed’s preferred measure, the personal consumption expenditure price index (PECPI), is running at 4.9%, as of August. Getting to the 2% real rate Diamond considers essential, and a minimum, would bring the Fed funds benchmark to almost 7%. That’s more than twice the current reading of 3% to 3.25%. No wonder Diamond is so concerned that the rise in rates he deems necessary could cause great harm to borrowers and the economy.

To forestall a meltdown, he advises that the Fed move slowly and cautiously. “The Fed needs to increase rates in a measured way over a long period because of the lag Friedman was talking about,” says Diamond. “That’s so all these people who didn’t hedge and took on all the short-term and variable rate debt can handle the shock.” He’s also concerned about the unpredictable effects of QT. “It pulls liquidity out and raises long-term rates relative to short-term rates,” he says. “If the Fed goes too fast on QT, it will cause all kinds of trouble. An early warning sign is that when they stopped quantitative easing in Britain, and it nearly started a crisis.”

In conclusion, Diamond provides his own take on the famous line from Warren Buffett joking that when the tide goes out, you can see who’s swimming naked. “It’s one of my favorites,” says Diamond. “The water’s been so high for so long that people didn’t even put on the skimpiest of bathing suits. A lot of embarrassing stuff is about to happen.” The Fed that blundered by filling the pond to such heights is the naked swimmer that should be the most embarrassed of all.