JPMorgan CEO Jamie Dimon tells Saudi ‘Davos in the Desert’ that Ukraine war and U.S.-China tensions are bigger threat than a recession 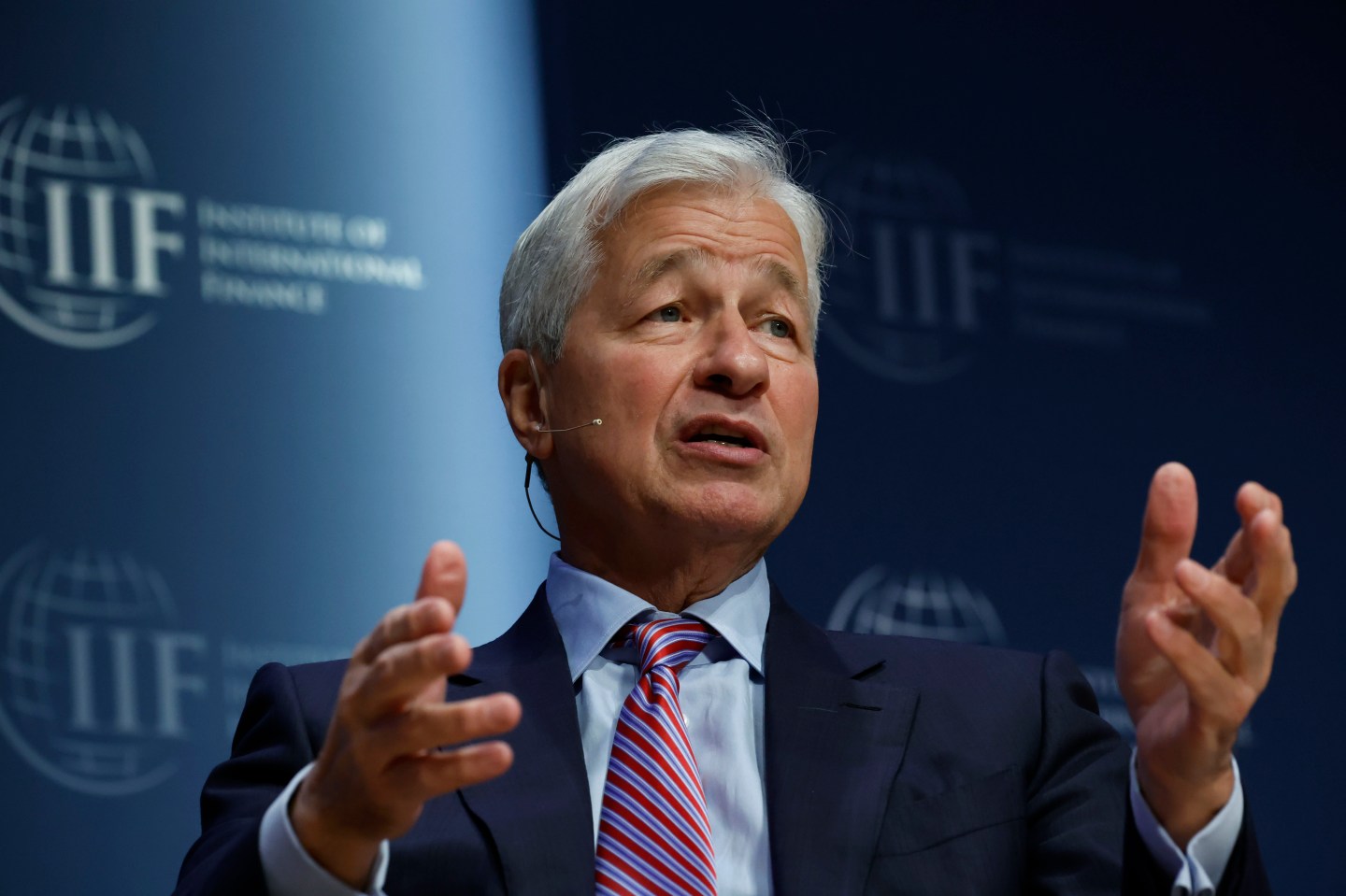 JPMorgan Chase CEO Jamie Dimon and his Goldman Sachs counterpart David Solomon said a recession in the US and Europe is increasingly likely.

Solomon said economic conditions are going to “tighten meaningfully from here” as the Fed has made it clear it is going to raise to the path target for interest rates. “When there’s an economic scenario where inflation is embedded it’s very hard to get out of it without a real economic slowdown,” he said at Saudi Arabia’s Future Investment Initiative conference in Riyadh.

Still, Dimon said he is worried more about geopolitics. “The most important thing is the geopolitics around Russia and Ukraine, America and China, relationships of the western world,” he said. “That to me would be far more concerning than whether there’s a mild or slightly severe recession.”

This year’s event comes amid an escalating dispute over an OPEC+ decision to cut oil production that risks causing lasting damage to political relations between the US and Saudi Arabia, though Wall Street seems unfazed. JPMorgan’s Dimon and Goldman’s Solomon are among US finance chiefs attending the conference — a showcase for Saudi Crown Prince Mohammed Bin Salman.

Dimon Says Saudi, US Will ‘Work it Through’

JPMorgan CEO Dimon said he’s confident US and Saudi Arabia will work out their differences after OPEC+ decision to cut 2 million barrels a day of oil sparked a spat between the two countries.

The American policy doesn’t have to be: “Everything our way,” he said. “What doesn’t help is the press making huge deals of things that aren’t huge deals.”

“Saudi Arabia and the US have been allies for 75 years. I can’t imagine any allies agreeing on everything and not having problems,” Dimon said. “They will work it through and I’m comfortable folks on both sides are working through and these countries will remain allies going forward”

“Three years ago in this conference the word hydrocarbon was evil,” he said. “A lot of the challenges we’re facing today with energy supply are caused by lack of investment created by the inability for many financiers, investment institutions and energy companies to invest in critical supply chains.”

Solomon Says We Are Going Through Period of Adjustments

Goldman CEO Solomon told the conference that world is going through a period of adjustments whether in technology or monetary polices.

“The innovation economy is alive and well. The progress that’s been made on a whole variety of fronts, whether it’s AI and quantum or med tech and advances in health care will have a profound impact on the way we live,” he said.

“We’re going through an adjustment after a very long period of the world — at least as far as monetary policy — working a certain way.”

“It’s important to bear in mind that the transition from fossil fuels to renewables cannot and will not happen suddenly or in a short time. Even today, solar and wind energy account for only 10% of global power generation,” said Reliance Industries Ltd. Chairman Mukesh Ambani.

“Therefore, investments in oil and gas shouldn’t continue to fall,” he said. “If that happens, it will impact global growth, global economy and ultimately the well being of the people.”

The price of solar power will keep rising for another five to seven years because inflation and higher interest rates are pushing up project costs, according to Acwa Power Co.

“Five years, I hope,” Paddy Padmanathan, CEO of the Saudi renewables firm, said in an interview with Bloomberg TV. “Costs are going to go up. We are seeing it. It’s immediate. Technology driving down costs won’t happen as fast as inflation and interest rates are pushing prices up.”

Bridgewater Associates founder Ray Dalio said productivity is among his great concerns and said the printing of money is leading to overspending.

“We’re creating unsound finances because we print a lot of money. We want to spend more money than we have,” he told the conference. Investing in productivity, in education and creating higher education that allows living standards to rise, is the way of the future, he said.

Dalio, who relinquished control of Bridgewater Associates last month, said he wasn’t retired, but in transition.

Coinciding with the summit, the kingdom’s $620 billion sovereign wealth fund said it started a voluntary carbon market firm and plans to auction one million tons of credits on Tuesday, supporting the country’s net zero target.

“The company will offer guidance and resourcing to support businesses and industry in the region as they play their part in the global transition to net zero, ensuring that carbon credit purchases go above and beyond meaningful emission reductions in value chains,” according to a statement.

Earlier this month, the Public Investment Fund raised $3 billion with its debut bond sale in the currency that also marked its first foray into ethical finance.

The fund’s Governor Yasir Al Rumayyan said at the FII event on Tuesday that cost of living, poverty and unemployment are significant issues in many nations. “We need to learn how to manage crises, and not to be managed by crises,” he said, flagging up inflation and high interest rates as particular areas of concern. “It’s no longer a matter of micro- or macro-economics — we are living in an age of geo-economics.”

Rabbi Says He Was Barred Entry to Saudi Investment Conference

An Israeli-American rabbi said he was blocked from entering Saudi Arabia’s flagship investment conference in Riyadh on Tuesday despite securing an invite from the organizers.

Rabbi Jacob Yisrael Herzog, who previously declared himself the “chief rabbi of Saudi Arabia” after arriving on a tourist visa, says he received an invite to the event from Future Investment Initiative CEO Richard Attias and had an entry badge.

Organizers for the Future Investment Initiative, which runs through Thursday, said they were looking into the incident when contacted by Bloomberg

The recent market volatility in Hong Kong was a reaction of investors’ questions around the future, but it’s important to “focus on the long-term opportunity” in China, Nicolas Aguzin, the CEO of Hong Kong Exchanges & Clearing Ltd., said in an interview with Bloomberg TV. It’s been a “tough year” for IPOs in Hong Kong but the pipeline is “still good,” he said, with about 140 companies having submitted their applications.

The Saudi event will also have its biggest Chinese delegation with over 80 CEOs from the country attending.

Alardhi also said “fundamentals are strong” in the US, and that Investcorp will continue to invest in the UK in the long term.