Mark Zuckerberg and Brian Chesky define the post-pandemic CEO culture split: What kind of boss do you work for? 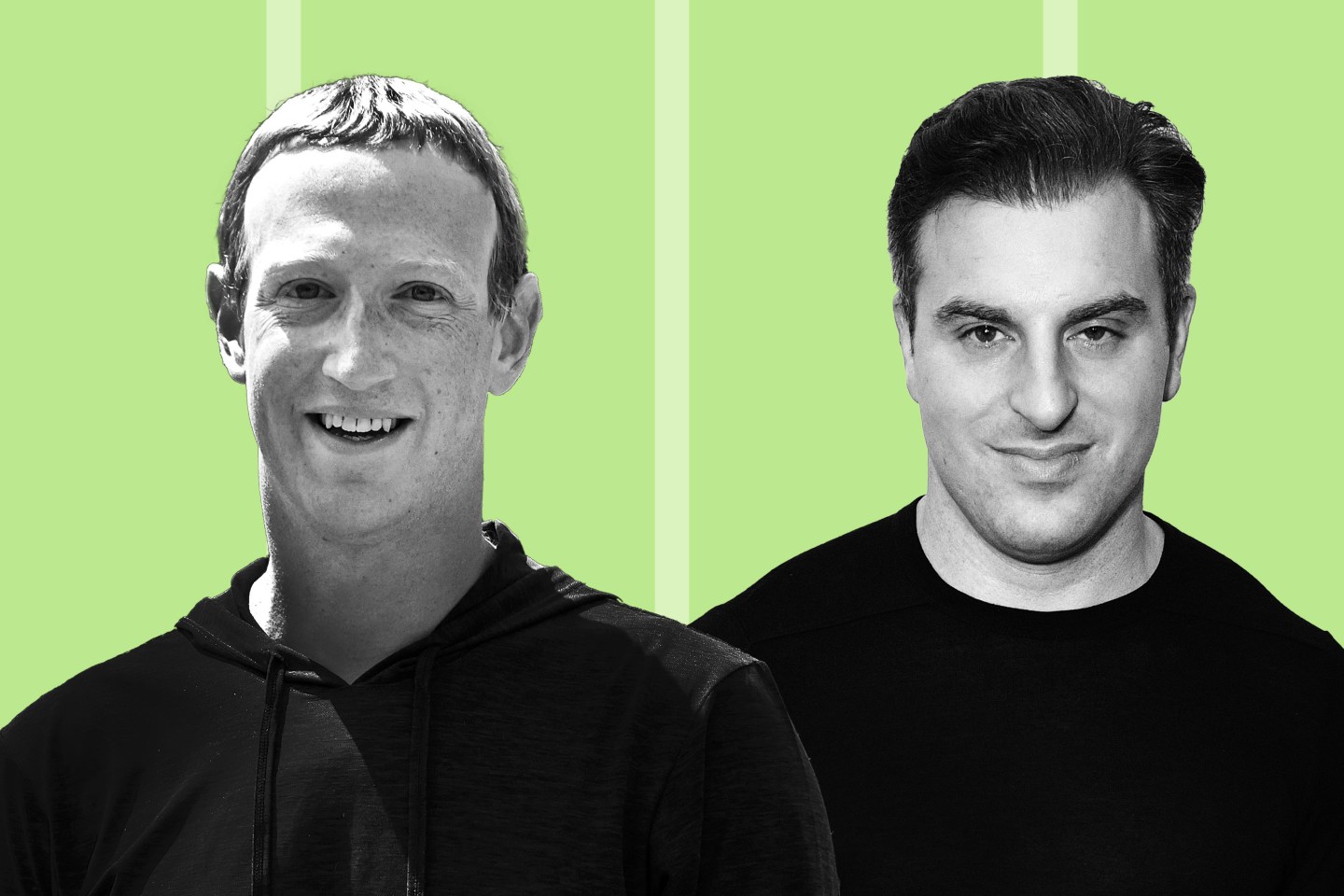 If the next blockbuster superhero movie centered around the return-to-office battle, then the villain and the hero are painstakingly obvious: The CEO ordering workers back to office wears the purple cape, and the CEO allowing employees to work from home forever dons the red one.

At least, that’s likely how the 87% of workers who take advantage of remote work see it. Many employers gave their white-collar workforce the moon during the pandemic, allowing them to work from home indefinitely, providing wellness days, and promising to create a more diverse and equitable workplace. Some even enjoyed home office stipends and comped internet. Such perks became the norm for workers, who were quick to join the Great Resignation if their company wasn’t meeting their expectations.

For two years, it’s been a worker’s world as companies scrambled to hire in a tight labor market where there are 1.7 job openings for every worker. It made employees hopeful that the post-pandemic workplace would emerge different and improved. But this year is proving that that hope was built on a flimsy foundation of promises—at least at some companies.

The upper hand is beginning to shift back to bosses, with many blaming remote work for hurting their bottom line. Experiencing what one headhunter called “do-gooder fatigue,” CEOs like Elon Musk and Mark Zuckerberg began rolling back the perks in stern staff memos, leaving workers in a state of whiplash. Labor Day proved to be a turning point when companies like Apple and Peloton called workers back to their cubicles (again): More workers were in office than they have been since the pandemic started. Then the benefits started disappearing; Salesforce, for example, announced last week it was ending the once-a-month well-being holidays it offered during COVID.

It’s not surprising that some companies will become “less employee-centric” in their policies as a recession looms, says organizational psychologist Tomas Chamorro-Premuzic. But “this could end up being a mistake if their competitors are still offering more freedom and flexibility,” he tells Fortune.

But there are still a few hero CEOS out there, championing for a different future of work. Just look at Airbnb’s Brian Chesky or Yelp’s Jeremy Stoppelman, who have implemented remote work policies and promised not to change them, arguing that it’s better for company culture and worker productivity.

After all the changes of the past two-plus years, what has emerged is a post-pandemic CEO culture split, in which some executives are withdrawing perks and others are doubling down. Which boss do you work for?

The Mark Zuckerbergs of the world focus on the bottom line

In July, Zuckerberg warned staff in a memo that he would be “turning up the heat” to weed out underperformers.

“Realistically, there are probably a bunch of people at the company who shouldn’t be here,” Zuckerberg said. “Part of my hope, by raising expectations and having more aggressive goals, and just kind of turning up the heat a little bit, is that I think some of you might decide that this place isn’t for you, and that self-selection is OK with me.”

It’s been the mantra among many CEOs this year, who put their foot down on many pandemic-era policies in a push to get back to business as usual as a recession looms. In June, Tesla CEO Elon Musk ordered workers to spend a minimum of 40 hours a week in the office in a “tone-deaf” ultimatum. “If you don’t show up, we will assume you have resigned,” wrote Musk, who now receives weekly absentee reports.

Last month, BlackRock CEO Larry Fink mandated that workers be in the office three days a week as a solution to inflation, noting that the firm would “be taking a harder line as to how we bring our employees back.”

Insisting workers return to office is just one way some CEOs are trying to make the future of work look a lot like the past. The majority of workers (71%) said their companies increased the focus on mental health in the wake of the pandemic, a survey by digital mental health platform Headspace Health found. But only a quarter say employers have maintained that focus this year.

And then there are the many promises that companies made in 2020 to fight systemic and societal racism by amping up their diversity, inclusion, and equality efforts. But such efforts are moving at a glacial pace, largely because companies are failing to implement DEI structures that support a more diverse workplace. A 2022 report by software company Culture Amp found that only 34% of companies have enough resources to support DEI initiatives and only 49% have a strategic diversity plan in place.

The Brian Cheskys of the world focus on talent

While some CEOs want to get back to the old way of doing things, others are looking forward. Following what he called “the most productive two-year period in our history,” Airbnb’s Brian Chesky made work from home permanent back in May. He rolled out other perks this year as well, such as single pay tiers that base salary on role over location and the ability to work in more than 170 countries for up to three months a year in each location.

“What Brian gets is what Slack has seen…which is: It’s all about talent,” Brian Elliott, executive leader of Future Forum, tells Fortune. “Competition these days in business is about your ability to attract and retain talented people to have them focused on driving results for your business. And flexibility is a key tool for driving that.”

Future Forum’s quarterly Pulse survey found that flexibility is one of the top reasons, only second to compensation, motivating people to look for a new job. Elliott cited Chesky as a good example of a CEO who’s taking a digital-first approach, allowing people to work remotely while still making time for people to come together periodically.

So, too, is Jeremy Stoppelman, who implemented a fully remote policy for Yelp officially this year after deeming hybrid work “hell.” And a year after Spotify implemented its “Work from Anywhere” program, chief human resources officer Katrina Berg told Fortune it resulted in a lower turnover and increased diverse representation.

“The organizations that are actually being more flexible with their workforce will not only attract and retain great talent, they will actually outperform their competitors,” argues Elliott.

It’s all about trust and transparency

Now, the CEO culture split that has emerged isn’t so black-and-white. Painting the boss who wants you back in office as the bad guy is an easy narrative when you disagree with their stance.

Just because their talent approach is different doesn’t mean it’s wrong, Chamorro-Premuzic says. “Every company has a culture, and there is no such thing as one single successful culture. What’s important is that companies are honest about their cultural proposition, so the employees who have choices can make the best choice,” he explains, likening it to national culture: “Denmark and the U.S. are very successful, but the average Dane would not like to be American and vice versa.”

People who don’t believe their leadership is being transparent with them are 3.4 times more likely to say that they’re definitely leaving the organization, Future Forum finds. The risk that CEOs run is that “lack of flexibility, that lack of transparency, causes people—at least those who do have a choice—to look elsewhere,” Elliott says.

Strict office attendance requirements indicate a lack of trust, which may be a sign of a flawed culture, Spotify’s Berg told Fortune. “If you decide that you trust your people, and you took a long time to find them, and you want to treat them well, and they want to be with you, it doesn’t matter where they work.”

But, then again, the remote-work wars may be just one giant misunderstanding—less of a power struggle and more about differing opinions on the best approach for both companies and workers as we emerge from the pandemic. CEOs must decide whether they want to live in the past or move into the future: rebuilding a workplace the way it was run in the 2010s or pushing things forward and embracing the more flexible approach we’ve seen over the past two years, Elliott says.

Ultimately, it’s less about the good CEO versus the bad CEO, and more about executives promoting a work culture built on trust and transparency.