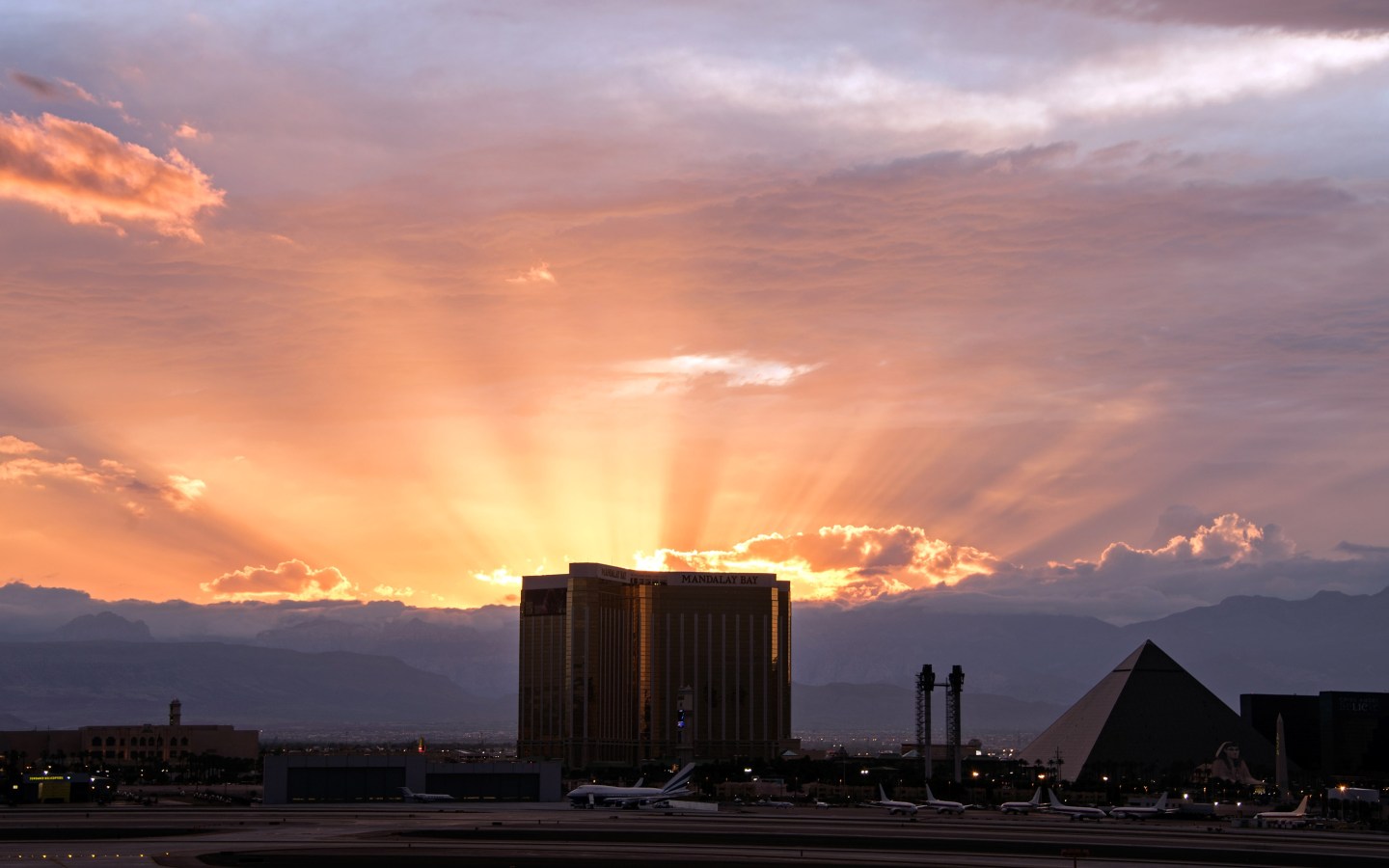 Squint awfully hard at the giant black cloud hanging over the tech industry and you’ll find slivers of silver linings.

Sure, global economic instability bruised Big Tech in 2022, but most companies remain fundamentally sound and well-positioned to rebound. Yes, widespread layoffs caused cutbacks on ambitious projects, but there’s still whimsy and wonder emanating from Silicon Valley. And when a war-torn nation needed help, the tech industry rose to the moment.

We delivered lumps of coal yesterday to five of tech’s biggest losers of the past 12 months. Today, it’s time to get back in the holiday spirit, recognizing five winners who thrived, strived, and even just survived this dreadful year.

Anytime you can get the world’s wealthiest person to grossly overpay for your unprofitable, adrift company, it’s been a good year.

Time will tell whether Elon Musk’s purchase of Twitter goes down as a colossal mistake or a shrewd pickup. For now, this much is certain: Twitter would have had a market cap right now between $10 billion to $20 billion, and yet the Tesla chief plunked down $44 billion for the platform. Not too shabby, investors.

Honorable mention to Twitter board members, who stuck to their guns and didn’t let Musk worm his way out of the deal.

As American legislators and regulators largely sat on their hands (rare exceptions: the Federal Trade Commission’s lawsuits against Microsoft and Meta), policymakers across the pond had a banner year in their quest to rein in Big Tech’s sprawling power.

The European Union finally landed two pieces of landmark legislation, the Digital Markets Act and Digital Services Act, designed to foster more competition in the tech industry (we’ll see whether they work as intended). Regulatory bodies issued billions of dollars in fines for privacy and competition-related violations against Amazon, Google, and Meta. And lawmakers in the U.K. inched closer to nailing down a major online safety bill, thankfully nixing a woefully vague mandate for tech companies to police legal but harmful content.

In a year marked by cutbacks, OpenAI reminded us that tech development remains an awe-inspiring endeavor. The research lab and startup brought generative A.I. to the masses, delivering the stunning text-to-image generator DALL-E 2 and remarkably advanced ChatGPT chatbot.

Both come with serious questions about safety, accuracy, and copyright ethics—issues that often follow the arrival of any new, disruptive product. For now, though, the folks at OpenAI allowed us to feel that rare sensation of excitement about tech’s limitless possibilities.

Neither tech titan had a banner year in the market, with Apple shares sliding 21% and TSMC’s Taiwan-listed stock slipping 24%. But both companies put their indestructibility on display, generating consistently strong demand despite sector-wide woes afflicting their rivals.

Apple’s iPhone demand has held steady—even as critics grumbled about the latest line’s lack of killer new features and COVID wreaked havoc on supply—while Mac saw a resurgence and services sales kept growing at a steady clip. Meanwhile, Apple’s biggest chip supplier, TSMC, plowed through a brutal stretch for semiconductor companies, reporting a 35% year-over-year increase in revenue and 52% jump in profits through the first nine months of 2022.

The intertwined firms will continue to face challenges in maintaining steady relations with China, but 2022 should reinforce their resilience.

Social media companies did their part by blocking Putin’s propaganda, Kremlin retaliation be damned. Microsoft, Amazon, Google, and many smaller cybersecurity firms lent their expertise to help Kiev stave off Russia’s digital offensive. SpaceX, Airbnb, Uber, and countless other companies made their services available free of charge to refugees and the Ukrainian resistance.

At its very best, tech remains a tool for good, for connecting and empowering those striving to make our world a little more perfect. Given the opportunity to put its professed values into action, tech delivered.

New policies, no fine. Amazon and European Union regulators have reached a settlement over allegations that the e-commerce behemoth engaged in anti-competitive practices that hurt third-party vendors, the New York Times reported Thursday. As part of the agreement, Amazon agreed to give more visibility on its e-commerce platform to rival sellers and bar its employees from using nonpublic sales data to guide its private label product decisions. The two provisions only apply to Amazon’s European Union operations. Amazon faced potentially billions of dollars in fines tied to the case, but it will not pay a monetary penalty as part of the deal.

What’s another 22 million shares? Elon Musk sold another $3.6 billion worth of Tesla stock this week, his fourth major sale of shares since announcing his intention in April to purchase Twitter for $44 billion, Bloomberg reported Thursday. Musk’s decision to unload Tesla shares became public in a Securities and Exchange Commission filing published late Wednesday. Musk paid for Twitter by tapping his personal wealth, selling equity stakes in the company, and taking out more than $10 billion in loans.

Sending Yangtze up the river. The Biden administration on Thursday blacklisted 22 Chinese semiconductor companies, including Yangtze Memory Technologies Corp., as part of a months-long effort by American policymakers to impede the republic’s tech industry, Reuters reported. Federal officials made the move amid fears that YMTC, a rising power in China’s chip industry, would share American technology with Chinese companies blacklisted by the U.S. government. Apple planned to begin using YMTC chips in iPhones made for Chinese customers, but the tech giant reversed course this fall.

The oversight onslaught begins. U.S. Rep. Jim Jordan, who is expected to take over as the House Judiciary Committee chair in January, issued a sweeping demand Wednesday for large tech companies to produce information on their communications with Biden administration officials, CNBC reported. The Ohio Republican’s demand offered a preview of the GOP’s plans for scrutinizing Big Tech’s power once the party retakes control of the House. Jordan’s order focused on conversations between federal bureaucrats and tech employees about content moderation since the beginning of 2020.

Setting down their smartphones? Rampant growth in the $100 billion-plus mobile gaming market is finally coming to a pause. The Financial Times, citing two leading industry analysts, reported Thursday that mobile gaming sales will fall this year for the first time since the arrival of smartphones. The decline mirrors a broader slowdown in the gaming industry, which has seen customers cut down on their spending and gravitate toward other activities. Some industry executives also said the proliferation of free-to-play titles has cut into sales of paid apps and in-app purchases, causing a reassessment of the sector’s future.

Mobile games have been around since Nokia’s Snake in the late 1990s but the arrival of Apple’s App Store in 2008 kick-started more than a decade of extraordinary growth, turning them into a $100bn market that now accounts for half of the gaming industry’s overall revenues.

Revenues are forecast to fall by 6.4 per cent this year to $92.2bn, according to gaming data company Newzoo, a sharp reversal from the 7.3 per cent growth mobile saw last year and 25.6 per cent rise in 2020 when lockdowns drove an increase in consumers’ appetite for virtual entertainment.

The tug of war between Tim Cook and Elon Musk just took a twist as Apple folds in the face of European Union laws, by Prarthana Prakash

Twitter declares war on sharing location information about others after banning an account that tracks Elon Musk’s private jet, by Matt O’Brien and the Associated Press

Is San Francisco back? Venture investors weigh in on how the hub of VC and tech startups has—and hasn’t—changed, by Anne Sraders and Jessica Mathews

Audits could solve crypto’s transparency problem. Why is that so hard?, by Jeff John Roberts

Hacker says they broke into FBI’s 80,000-member InfraGard database by posing as financial firm CEO, by Frank Bajak and the Associated Press

Amazon says it reduced use of single-use plastic last year but an environmental group says it jumped almost 20%, by Haleluya Hadero and the Associated Press

The FTC’s cases against Meta are chasing Facebook’s ghost, by Adam Kovacevich

It’s 2016 all over again. A few days late to this one, and I know the world doesn’t need more eyeballs on yet another Elon Musk think piece. But earlier this week, Wired’s Gideon Lichfield offered one of the most incisive pieces of commentary to date on the new Twitter owner’s disorderly reign, the left-elite’s obsession over his every move, and the political right’s embrace of yet another chaos agent. It’s a frustratingly familiar pattern that traces to the early days of the Trump administration, a time when nuance and substance too often succumbed to outrage and grievance. Wrote Lichfield: “The desire so many have to see people like these either soar or burn produces an attendant bias in evaluating them—a feeling that their actions are the only ones that really matter. That’s what produces this breathless obsession with their every move and blinds us to more complex information that might paint a clearer picture of the messier reality—and whatever future we’re barreling toward.”