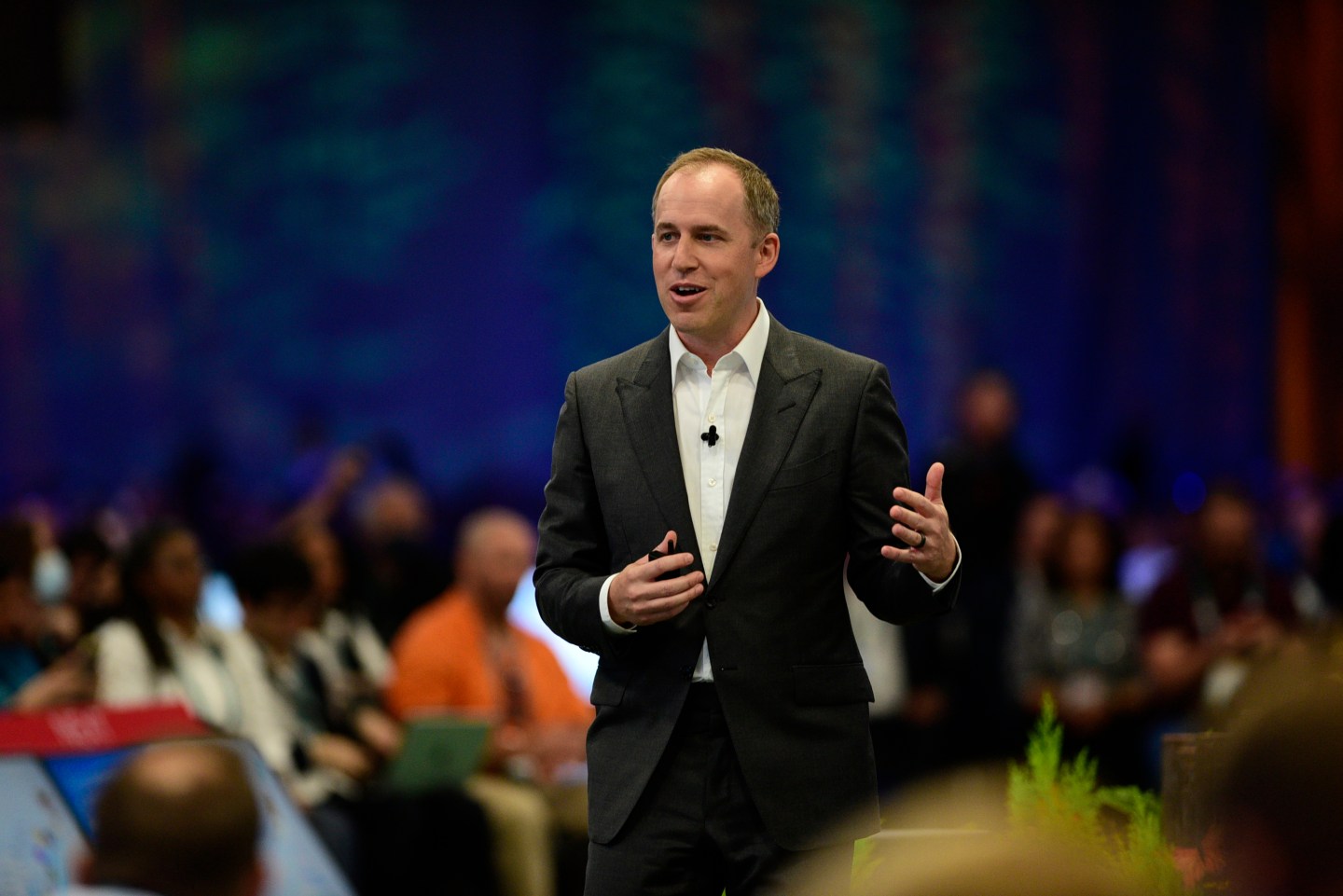 Twitter board chair Bret Taylor has been the epitome of cool as Tesla CEO Elon Musk has thrown everything from public tantrums to allegations against the social media company in an effort to evade sticking to his $44 billion acquisition deal.
Marlena Sloss—Bloomberg/Getty Images

Every parent knows the first rule of responding to a child’s temper tantrum is to stay calm.

It’s a mantra that Bret Taylor—erstwhile entrepreneur, Salesforce co-CEO, Twitter board chairman, and father of three—appears to know all too well.

For the past several months, Taylor has been the picture of cool as Elon Musk had a conniption about Twitter, the company Musk agreed to buy at an embarrassingly overinflated price of $44 billion. When Musk lobbed insults and levied claims of borderline criminal activity at Twitter’s leadership, all in an apparent attempt to sabotage the purchase or negotiate a better deal, Taylor stood firm in his intention to close at the original price.

While Taylor can’t claim victory quite yet, the mild-mannered executive moved one major step closer this week to triumphing over his temperamental foe.

In a letter to Twitter’s board that became public Tuesday, Musk offered to buy Twitter at the originally agreed upon price, ostensibly seeking to end a four-month legal battle over the deal. Musk hasn’t commented on the reasons for his about-face, but the two sides were set to go to trial in two weeks over Musk’s move in June to renege on the purchase.

Legal analysts and tech pundits have cautioned that Musk could be engaging in even more underhandedness with his letter. For example, the offer could be a stalling tactic designed to delay the trial or a deposition Musk is scheduled for this week.

But assuming Musk’s intentions are pure, the concession is a testament to Taylor’s handling of Twitter’s tortuous dance with the world’s wealthiest man.

By multiple accounts, including detailed profiles from Bloomberg and the New York Times, Taylor has served as the point person for navigating Musk’s maneuvers.

When Musk became Twitter’s largest shareholder and expressed interest in joining the company’s board earlier this year, Taylor served as the primary contact for welcoming him to the fold.

When Musk made a stunningly high bid in April to buy Twitter for $54.20 per share, a 38% premium over the closing price before his investment in the company became public, Taylor led the board in accepting the offer. As critics complained about handing over the company to Musk, Taylor resolutely and accurately stated that the board had a fiduciary duty to take the deal. (The decision looks even better today, following a steep drop in the stock prices of ad-driven social media companies.)

And when Musk went nuclear in public on Twitter in subsequent months—insulting CEO Parag Agrawal, alleging company leaders misled investors and regulators about spam bots on the platform, and backing out of the deal—Taylor merely pointed to the near-ironclad contract signed between the two sides.

“He doesn’t get ruffled,” Stewart Butterfield, the chief executive of Slack, which Salesforce acquired last year, told the Times. “He’s very resolute and definitely believes, as I do, in the merits of the case.”

Taylor’s time on Twitter’s board is hardly spotless.

Since joining the board in 2016, the company has struggled to build upon its platform and keep up with rising competitors, causing its share price to wobble. Evidence also continues to mount that the board enabled former CEO and cofounder Jack Dorsey, who has been accused by activist investors and ex-employees of failing to devote adequate time to the enterprise (Dorsey, for his part, has blasted Twitter’s board as “the dysfunction of the company”).

Responsibility for these shortcomings doesn’t land fully at the feet of Taylor, who ascended to the chairmanship of the 11-person board in late 2021, but any lavish praise of his leadership must include acknowledgement of these travails.

Reasonable people also could argue that Taylor never should have indulged Musk’s offer to begin with, owing to the Tesla chief’s plans to moderate less content on a platform that’s already pretty toxic.

Still, if the purchase closes at $44 billion, Taylor’s captaincy of Twitter through the past year will go down as a case study in steadiness. He delivered premium value to shareholders, his first and foremost responsibility, and a sound legal contract that limited the collateral damage from Musk’s outbursts. Then, he refused to add gasoline to the many fires lit by Musk, protecting the Twitter brand and staff as much as possible.

Throughout this messy process, there’s always been one adult in the room—and it looks like he’s about to get his way.

Chipping away at China. Apple is working with suppliers to shift some AirPods and Beats headphone production to India, the latest example of the tech giant trying to reduce its reliance on manufacturing in China, Nikkei Asia reported Wednesday. Apple has asked suppliers to be ready to ship headphones from India by 2023, though it wasn’t immediately clear what share of the company’s AirPods and Beats products would emanate from the world’s second-most populous country. Most of Apple’s headphones are made in Vietnam, though nearly all of its iPhones are still assembled in China.

Try again next year. Amazon has frozen corporate hiring in its retail division through the end of 2022, the New York Times reported Tuesday, citing an internal memo obtained by the newspaper. The decision follows a slowdown in e-commerce growth this year and broad efforts across the tech sector to trim costs. Amazon has about 10,000 openings in the retail division, which covers the company’s e-commerce and logistics units, among others.

Bored with Bulletin. Meta confirmed plans Tuesday to shut down its newsletter platform, Bulletin, in early 2023, TechCrunch reported. The Facebook and Instagram parent launched Bulletin last year as part of an effort to compete in the growing newsletter space currently led by Substack. Meta is scaling back or scrapping several of its less-popular offerings, looking to curb costs and pay for its expensive metaverse-related investments.

Spying an out. Google has agreed to pay $85 million to settle a lawsuit brought by the state of Arizona alleging illegal data collection and tracking by the tech giant, Bloomberg reported Tuesday. The Arizona attorney general’s office argued Google amassed user location data for its targeted advertising business from customers who opted out of tracking features. Google officials said they changed policies addressed in the Arizona complaint years ago.

On the road again. Uber spent the spring in a panic over global driver shortages, which drove up ride prices and frustrated countless customers. But as fall dawns, the ride-hailing company is once again rolling. In an interview with the Financial Times, Uber’s head of mobility, Andrew Macdonald, said driver shortages are in the outfit’s rearview mirror, with supply up 70%. The addition of more drivers follows Uber’s effort to boost pay incentives and improve its platform, as well as a period of economic uncertainty that’s pushing people into gig work.

It is the first time since the pandemic began that Uber has seen such consistent and widespread improvement in its supply of drivers, after two years of frustration for passengers who were left stranded by a dearth of available cars.

It comes almost a year after Uber’s chief executive Dara Khosrowshahi flew to London to tackle the company’s driver shortage, pledging to raise pay and offer £500 bonuses for referrals after many drivers left during the pandemic lockdowns. In the U.S., Uber pledged to invest $250mn to recruit and retain drivers last year.

Instagram is about to flood your feeds with more ads, by Chris Morris

Elon Musk says Twitter deal acts as accelerant for his planned WeChat rival, the ‘X’ app: Here’s what that means, by Christiaan Hetzner

Musk’s U-turn on Twitter has investors like billionaire Carl Icahn laughing all the way to the bank, by Yiqin Shen, Scott Deveau, and Bloomberg

Meta is backing out of a major New York office deal as it prepares to cut budgets across the company, by Prarthana Prakash

Musk’s Optimus robot disappoints, but his ambition might just transform the field anyway, by Jeremy Kahn

Europe’s tech winter will inspire a new generation of founders, by Alan Poensgen

Check and mate? The staid world of online chess has been rocked by scandal over the past month, with perhaps the biggest bombshell dropping Tuesday. The Wall Street Journal reported that Chess.com, the game’s leading digital platform, has concluded American grandmaster Hans Moke Niemann likely cheated in more than 100 online games, including some with prize money at stake. Niemann’s ethics became an international story last month after he defeated world champion Magnus Carlsen, who later accused the 19-year-old of engaging in some kind of chicanery. Niemann had previously admitted to two instances of cheating when he was 12 and 16 years old, though he has denied any additional escapades. Yet the Chess.com report found “many remarkable signals and unusual patterns” in Niemann’s play, such as opening separate screens on his computer before making particularly shrewd moves.