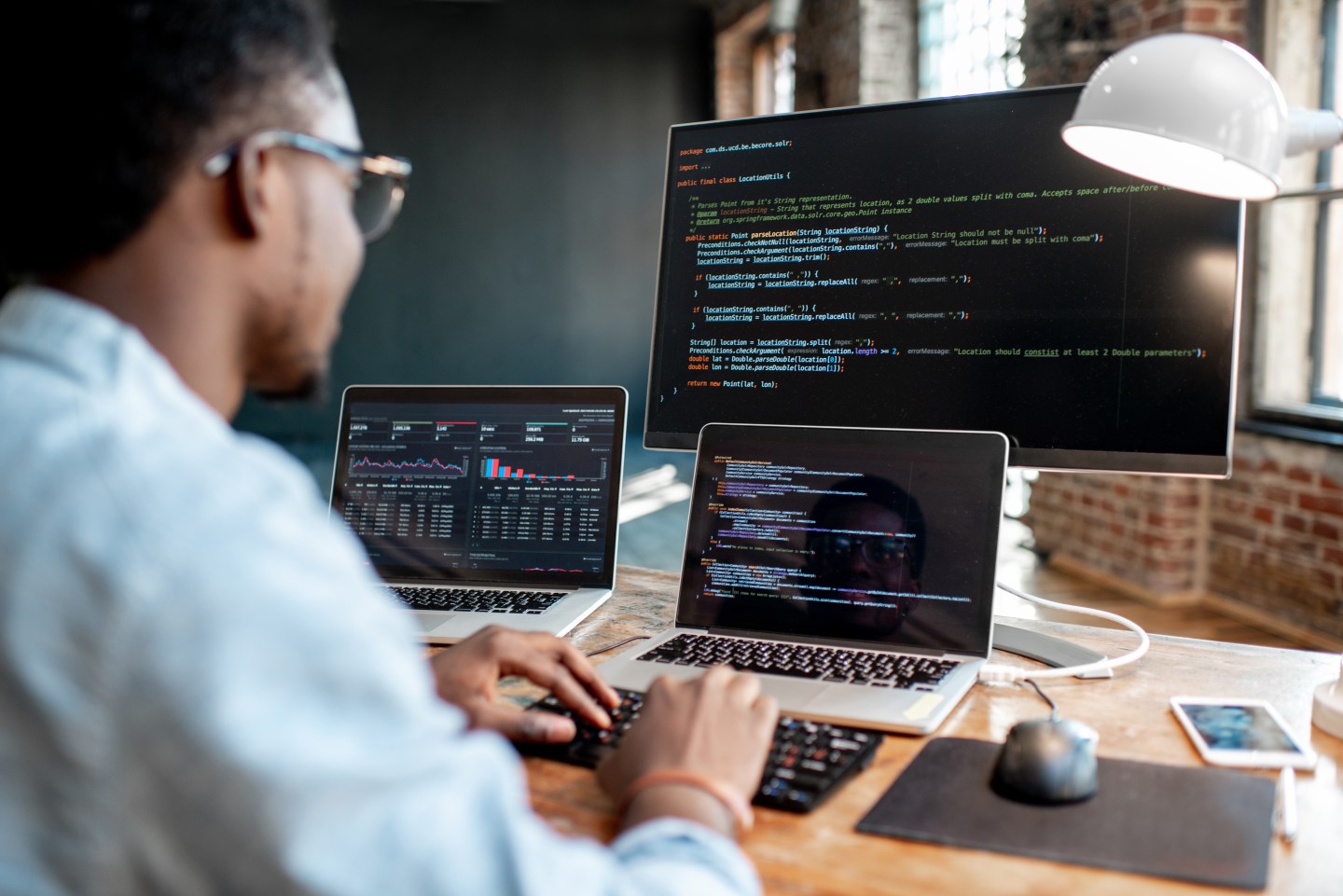 In November, there were 35,132 tech job postings in the finance and insurance sector, according to CompTIA’s analysis of the U.S. Bureau of Labor Statistics jobs report released on Dec. 2. CompTIA, an IT industry group, found that tech occupations in all industry sectors grew by 137,000 positions in November. Meanwhile, tech companies added workers for the 24th consecutive month—14,400 workers in November, and tech sector employment has increased by 207,200 this year. “There are still many more employers hiring tech talent than shedding it,” Tim Herbert, chief research officer at CompTIA, says.

“The finance and insurance sector had the second highest volume of tech job postings,” Herbert says. For example, companies including Humana, Capital One, Elevance Health, Edward Jones, Citi, Travelers, and Wells Fargo are in the top 25 for tech job postings for the month, he says. The highest volume was in the traditional tech job category of professional, scientific, and technical services, with 41,188 job listings, according to the analysis.

I asked Herbert if tech job listings for the finance and insurance sector have been on an uptick since January. “Generally, yes, but mirroring the pattern seen in many sectors, there was a significant spike in postings during Q2, resulting in record volumes of hiring activity,” he explains. “Job postings volumes then settled back to more normal ranges. But for the finance and insurance sector, year-to-date aggregate volumes are at 442,147 vs. 326,698 for the same period last year, representing an increase of 35% year over year.”

The three employers with the most tech job listings in November were Humana (4,951), General Dynamics (3,386), and Capital One (2,716), according to CompTIA’s findings. In comparison, major tech companies like Apple had 1,791 tech job listings, and Amazon had 1,516.

Capital One also pointed to the significance of tech. “One of the real benefits of our tech transformation has been allowing us to build a lot more sophistication, more data, more machine learning, and other things into the credit underwriting process,” Capital One CEO Richard Fairbank said during their Q3 earnings call.

Meanwhile, Apple CEO Tim Cook recently told “CBS Mornings” the tech giant is being “very deliberate” on hiring. “That means we’re continuing to hire, but not everywhere in the company are we hiring,” Cook said. Amazon, No. 10 on CompTIA’s list may still be hiring, but last month, CEO Andy Jassy announced that the company would begin laying off employees across multiple departments. Amazon joins other Fortune 500 tech companies like Meta and HP Inc. implementing significant layoffs.

But as a potential recession is looming, will tech professionals lean toward roles at financial institutions that some might say are less glamorous than a role in Silicon Valley? “It’s tough to say for sure how tech professionals rate their preference for working in different sectors,” Herbert says.

But he did offer this piece of advice based on CompTIA’s research: “If companies in the finance and insurance sector can offer compelling tech work along with job stability, work flexibility or career growth, for example, we can reasonably infer tech professionals will consider those job opportunities.”

Ways to woo tech professionals, for sure.

The renewable energy industry is projected to increase spending by approximately $430.15 billion between 2022 and 2026, accelerating at a compound growth annual rate of 8.31%, according to SpendEdge, a provider of procurement market intelligence. Top global suppliers are expected to be Enel (Italy), NetEra Energy (U.S.), and Exelon (U.S.) during this period, SpendEdge projected.

"How Analytics Is Changing Finance," a new report in Wharton's business journal, reflects on the first session of this year's Beyond Business discussion series where Wharton professors Michael Roberts and Daniel Taylor explored how analytics is influencing finance by ushering in new efficiencies, but also creating new challenges.

Seth Niessen was named CFO at G&S Business Communications, an integrated marketing communications agency, effective immediately. Niessen is a 21-year agency veteran and a G&S shareholder since 2012. He previously served as the agency’s controller. Niessen helped guide G&S through the acquisition of CooperKatz & Company. He came to G&S with a background in public and private accounting.

"In uncertain economic times when many companies are making pre-emptive layoffs, you have the perfect opportunity to invest in underpriced talent. You’ll get a much higher ROI than in a tighter labor market–and the employees you hire will be more appreciative and loyal than those who had tons of other offers and feel they can easily find a job elsewhere. They’ll be more likely to stick around as the economic situation improves."

—Gleb Tsipursky, Ph.D., the CEO of the boutique future-of-work consultancy Disaster Avoidance Experts, writes in a Fortune opinion piece about mistakes to avoid when hiring and firing in an uncertain economy.