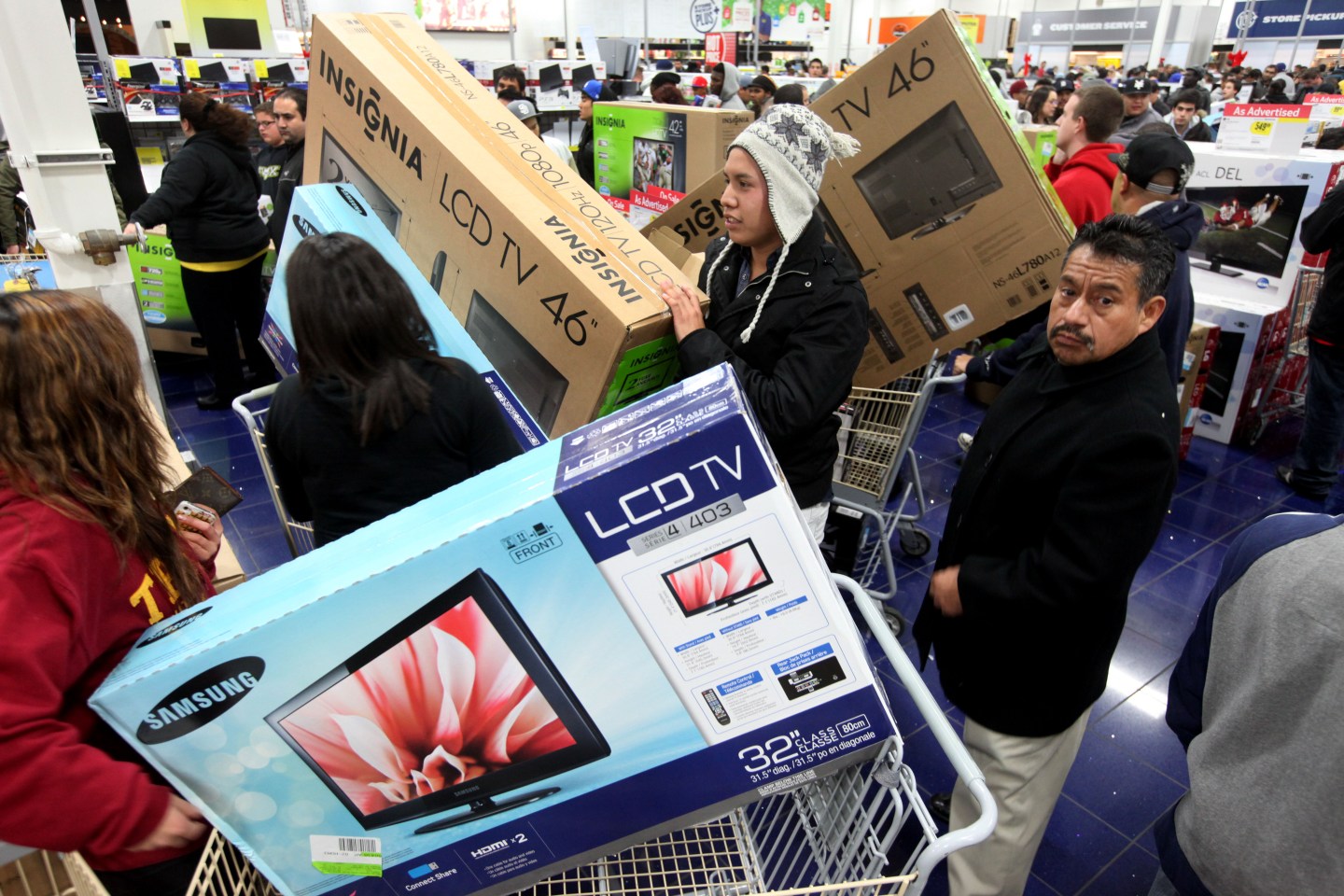 Happy Thanksgiving Eve, Data Sheet readers. A quick note that we’ll be stuffing our face with turkey on Thursday and (hopefully) reveling in a World Cup victory over England on Friday, among other activities. As such, we’ll be off those two days and return on Monday.

In the true spirit of the holidays, let’s explore the odd forecast for the ultimate post-Thanksgiving tradition: buying copious amounts of consumer electronics.

As a tumultuous 2022 nears an end for tech companies, the outlook for Black Friday through Cyber Monday looks as cloudy as congealed gravy. Some companies and analysts are predicting an unpleasant downturn in sales. Some see prospects for a surprisingly solid season. Others are grasping for signs of any consistent trends.

The uncertainty reflects a whole host of factors converging at the peak period for electronics shopping.

People are reluctant to spend too much in a high-inflation environment, yet they’re still getting paychecks with unemployment rates remaining low. Many tech companies have excess inventory, allowing them to offer steeper-than-normal discounts, but such promos will cut into margins. Consumers snapped up electronics in the early days of the pandemic, fueled by stay-at-home orders and stimulus orders, but the product renewal cycle never stops.

“Surprisingly, early season tech sales have been slow—straying from the trend of the last few years,” Paul Gagnon, a consumer technology industry advisor for the global market information firm NPD, said this week. “Consumers may be waiting for more traditional deeper discounts on Black Friday and Cyber Monday this year. Therefore, sales could grow against a softer Black Friday period the last couple of years.”

By now, a few universal truths about this shopping season have emerged.

Expectations for personal computer sales are undeniably bleak, largely because consumers bought all the PCs they needed over the past two years. HP issued a holiday-quarter earnings forecast Tuesday that fell short of Wall Street expectations, pairing the announcement with plans to lay off up to 10% of its workforce in anticipation of a prolonged slowdown. Meanwhile, Dell officials on Monday projected year-over-year fourth quarter sales would decline somewhere around 15%.

The outlook for video game sales isn’t quite as dire, but it’s underwhelming nonetheless. The Wall Street Journal reported Wednesday that the industry executives “issued sober outlooks for the current quarter,” as inflation-afflicted gamers pare back their purchases and spend less time on the couch.

On the plus side, consumers should benefit from the current macroeconomic conditions. Retailers and producers are looking to offload a build-up of inventory following a supply chain overcorrection, which should result in good bargains. Adobe predicts that discounts for consumers and electronics will exceed 25%, up from roughly 10% in 2021.

The broader holiday outlook, however, remains murky at best.

Compared to previous years, inflation-weary electronics shoppers generally held off on purchases in the pre-Thanksgiving stretch. As a result, a spending dam could give way starting on Black Friday—though there’s no guarantee of a big break.

Best Buy also buoyed hopes Tuesday of a strong finish to the year, particularly after a modest start to the quarter. CEO Corie Barry told analysts on an earnings call that “we expect there will be more customer shopping activity concentrated on Black Friday week, Cyber Monday, and the two weeks leading up to December 25th” when compared to prior years.

Other analysts and retailers, however, have been more bearish in their forecasts.

“While already soft, sales trends in our discretionary categories softened even more in the last few weeks of the quarter, a trend that’s persisted into the first few weeks of November,” Cornell said.

Headed into Black Friday, this much is clear: it’s a buyer’s market for those with the means and desire to spend. Happy hunting.

Hitting their limits. Workers at Foxconn’s primary Apple iPhone assembly plant fought with security officials Wednesday at the locked-down plant in China, the latest sign of strained tensions within the facility, Bloomberg reported. Videos obtained by Bloomberg showed hundreds of employees clashing with guards in a riot-like scene, culminating with several injuries to staffers. The uprising stemmed in part from frustration with unpaid wages and fears of COVID infections spreading throughout the plant, which employees have not been able to leave since mid-October.

Gone without a trace. Lawyers representing FTX said Tuesday that a “substantial amount” of assets were stolen from the disgraced cryptocurrency exchange’s accounts, lessening the chances that hundreds of thousands of creditors will be paid back, the Associated Press reported Tuesday. The exchange’s lawyers, speaking at a bankruptcy court proceeding, called the FTX debacle “one of the most abrupt and difficult company collapses in the history of corporate America.” They did not elaborate on the amount of stolen assets or identify potential perpetrators.

Edgy about Elon. Marketing data shows about one-third of Twitter’s top 100 advertisers have suspended their campaigns on the platform following Elon Musk’s takeover, the Washington Post reported. The data from digital marketing intelligence firm Pathmatics showed several prominent global brands haven’t advertised on Twitter in the past two weeks, including Mars, Merck, and Verizon. Numerous advertisers have voiced concern about Musk’s changes to Twitter and the potential negative impact on their brands, while Musk has accused those companies of caving to activist groups.

All new ventures. Andreessen Horowitz, or a16z as it’s known, stands among Silicon Valley’s venture capital giants—but its founders have even bigger plans for the firm. As detailed in an in-depth report by Fortune’s Jessica Mathews and Eric Newcomer, the journalist behind the Newcomer newsletter, the firm is launching new initiatives designed to increase its footprint in the finance world, aiming to “position the firm as a sort of Goldman Sachs or J.P. Morgan of the West.” The ambition reflects a16z’s rollicking success of the past decade, the result of shrewd investments in companies like Facebook, Airbnb, and Lyft. However, the recent downturn in tech fortunes and a shaky-looking headfirst dive into cryptocurrency companies has cooled a16z’s hot streak.

If there’s money to be put to work in technology, Andreessen Horowitz is there to play with it.

The firm will launch a  private wealth management service in January, opening the door to invest the personal funds of business executives, according to a source. A public market investing effort is being led by David George, formerly with General Atlantic. And an expanding collection of academics and policy wonks are being added to the payroll, which now numbers more than 500 people compared with 240 in July 2021.

Internal Twitter emails give first peek at Elon Musk’s ‘hardcore’ workplace: Vanishing perks and orders to explain ‘what you are trying to accomplish’, by Kylie Robison

Meta pushes back on ‘false’ report that Mark Zuckerberg is planning to step down as CEO, by Alice Hearing

Beauty in the eye of the A.I.: How inherent racial bias has shaped A.I. and what brands are doing to address it, by Gabby Shacknai

You’re a worse driver than a robot: Research shows gaper blocks and looky-loos aren’t an issue with AI, by Travis Loller and the Associated Press

The taxman shareth. I wanted to head into the holiday on a cheerful note. I really did. But I couldn’t let the day pass without acknowledging this crackerjack investigation from The Markup, which exposed how high-profile online tax preparation companies are sharing mass amounts of users’ financial data with Facebook, ostensibly in an effort to improve their targeted advertising efforts. The report shows that H&R Block, TaxAct, and TaxSlayer, among others, have employed a Facebook tool—one that’s widely used by the developer community but little-known to the public—to send customers’ personal info to the social media platform. The type of data shared varies by company, but in the most extreme cases, tax firms handed over users’ income and filing status. Several of the firms scrapped or shelved their use of the tool, known as Meta Pixel, following questions from The Markup.