Bob Iger’s second Disney stint will require tough decisions. This one will be the most difficult 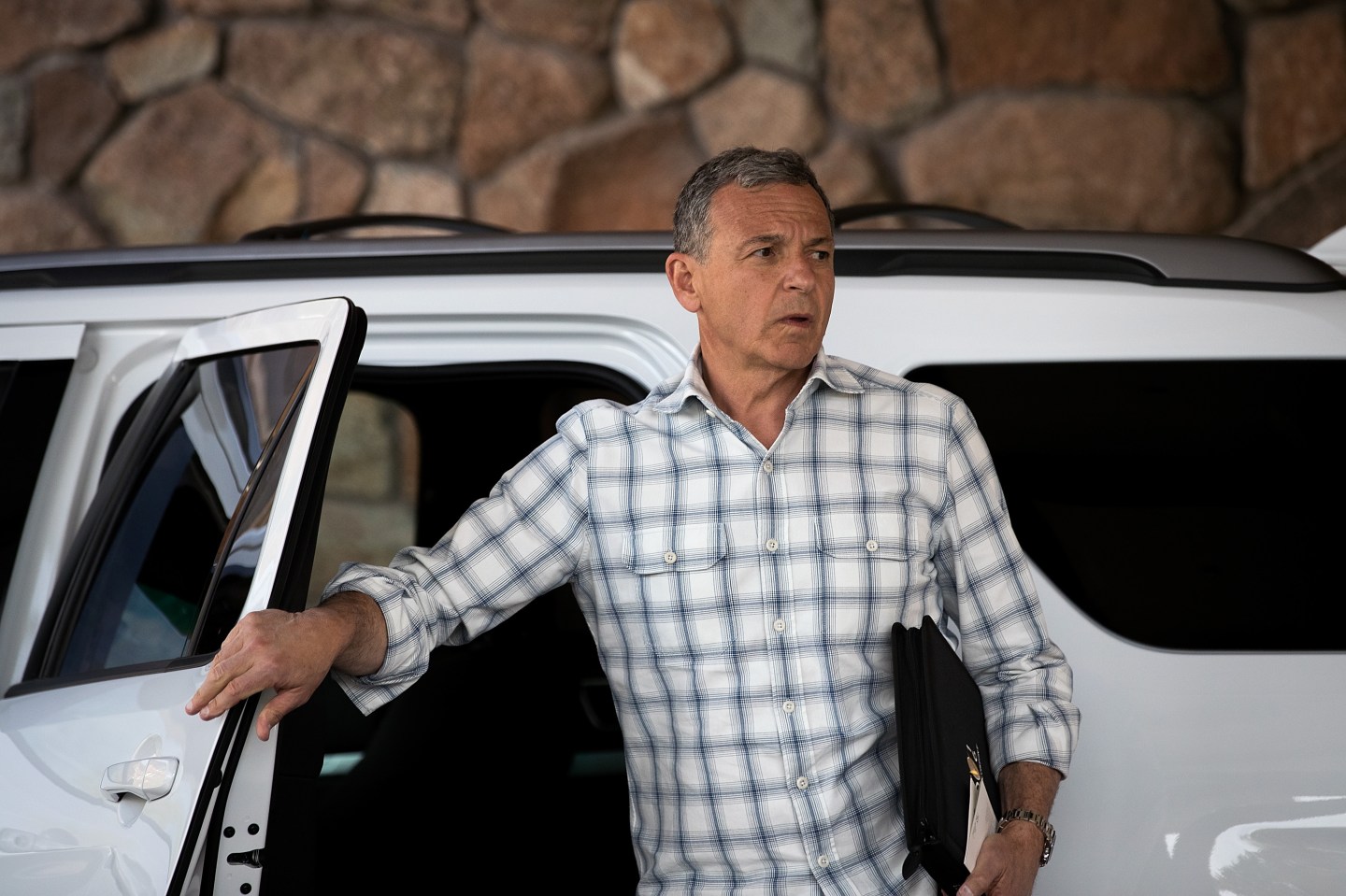 Bob Iger is back as the House of Mouse’s big cheese. One of his first orders of business: figuring out Disney’s streaming strategy.

Disney officials announced late Sunday that Iger, who stepped down as the company’s chief executive in early 2020 after a remarkable 16-year run, would immediately return and replace his hand-picked successor, Bob Chapek, as CEO. The Shakespearan machinations follow a tumultuous three years for Chapek, who never quite emerged from Iger’s shadow and presided over a dramatic decline in the company’s stock price. Disney shares, which were down 41% year-to-date through Friday, were up 6% in mid-day trading Monday.

In announcing the move, Disney Chairman Susan Arnold declined to throw Chapek under the bus for the media empire’s sagging financials. But she pointedly noted that Disney is embarking on “an increasingly complex period of industry transformation,” for which Iger is “uniquely situated” to lead the company.

For Disney and Iger, the department undergoing the biggest metamorphosis is video streaming.

Disney has made massive bets on the future of streaming, pouring tens of billions of dollars annually into Disney+, Hulu, and ESPN+. And so far, it’s been a net loser. Earlier this month, Disney posted fiscal fourth-quarter streaming losses of $1.5 billion, bringing fiscal-year total losses to $4 billion.

Disney leaders knew streaming would take time to turn a profit. Under a strategy initially implemented by Iger, Disney planned to spend gobs of money on high-quality content—much of it tied to intellectual property he acquired—and offer its streaming service at a bargain price for multiple years. Disney hoped the approach would lead to acquiring a critical mass of subscribers, who would later stomach incremental price hikes.

All was mostly going as planned under Chapek, who forecasted that Disney would reach streaming profitability by 2024. But the sheer scope of Disney’s streaming losses and some less-than-encouraging trends in the past quarter—namely, a slight drop in average revenue per Disney+ subscriber in the U.S. and Canada—put Wall Street on edge.

Iger will undoubtedly arrive with a mandate to put streaming on more solid footing. But there are few easy solutions at hand.

The sexiest move entails a splashy acquisition by the executive who shrewdly snapped up Marvel, Lucasfilm, Pixar, and a big chunk of Twenty-First Century Fox. Yet even in an industry ripe for consolidation—nobody, with the exception of Netflix, makes money in streaming—there are few clear-cut options.

Netflix makes some sense, and Disney is one of the few companies with the bandwidth to absorb it, but antitrust regulators would pounce on such a purchase. Amazon, HBO Max parent Warner Bros. Discovery, and Apple are unlikely to sell their streaming properties. Neither Paramount+ nor Comcast-owned Peacock really moves the needle or fits snugly with Disney’s IP-driven content strategy.

Alternatively, Iger could take Disney back to its roots, making it into a family- and franchise-focused platform while slashing costs on other content. Disney is projected to spend more than $30 billion next year on streaming content—an amount roughly double that of Netflix, despite the two companies touting similar subscriber totals.

Two top analysts signaled their preference for this approach in client notes following the Iger announcement, according to the Hollywood Reporter. MoffettNathanson analyst Michael Nathanson wrote that he hopes Iger “re-focuses (Disney’s) investment on areas of franchise strength and away from broader general entertainment content.” Wells Fargo analyst Steven Cahill added that he expects Iger’s arrival “could reopen discussion about whether Disney+ is to be a franchise IP content hub or a broader entertainment platform.”

Then again, Iger might ride out the current strategy.

Disney officials believe streaming losses have finally peaked ahead of two landmark moments set next month. The cost of Disney+, Hulu, and ESPN+ are all set to rise between $2 and $3 per month in December (though the price to bundle all three will remain the same). Meanwhile, Disney+ will debut an ad-supported tier at $7.99 per month, the current price for ad-free service. If Disney can avoid meaningful amounts of subscriber churn and dramatically boost revenue, profitability isn’t out of the question.

Whichever route Iger picks, it will be one of the most consequential choices of his second stint at Disney. After three years away, investors will have to hope Iger still has some Disney magic left in the tank.

A whole lotta IOUs. Cryptocurrency exchange FTX owes $3.1 billion to its 50 largest creditors, according to new bankruptcy court filings that shed detail on the company's financial predicament, Bloomberg reported Sunday. The records show that FTX owes two creditors more than $200 million and eight creditors with claims of $100 million to $200 million. FTX lawyers have not disclosed the names of the top 50 creditors, who make up a significant chunk of the firm’s $10 billion-plus in liabilities.

Bracing for even worse? Cryptocurrency values slumped late Sunday amid growing fears of contagion effects from FTX’s collapse. Bitcoin prices fell 4% in the past 24 hours, briefly dropping below $16,000, while Ethereum is down 7% during the same stretch. The selloff came as the trading arm of prominent crypto venture capital fund DCG halted withdrawals and questions mounted about the financial stability of crypto lender Genesis Trading.

No holding back. TikTok still plans to add about 3,000 more engineers worldwide as part of a three-year hiring spree, bucking the trend of layoffs across the tech industry, the Wall Street Journal reported Saturday. The ByteDance-owned platform expects to build on its 1,000-engineer workforce at its U.S. hub, in part by recruiting workers recently laid off by Meta and Twitter. TikTok recently lowered its 2022 ad revenue target from $12 billion to $10 billion, the result of a pullback in corporate ad spending.

Drawing the line. Twitter owner Elon Musk said Sunday that he does not plan to reinstate the account of InfoWars provocateur Alex Jones, even after he allowed Donald Trump back on the platform over the weekend. In a late-night tweet about the possibility of Jones’ reinstatement, Musk said he has “no mercy for anyone who would use the deaths of children for gain, politics or fame.” A jury ordered Jones this month to pay $1.5 billion in damages and compensation to families of children killed in the 2012 Sandy Hook Elementary School massacre, which Jones had repeatedly called a hoax.

A possible heavyweight bout? Elon Musk enjoys a good feud, but he might soon face down his most powerful corporate foe to date. As Bloomberg reported Sunday, the new Twitter owner could face pushback from the world’s two mobile app store titans, Apple and Google, over his plans to moderate content on the platform. Apple and Google have previously removed apps from their stores over content moderation policies that they deemed too lax—an issue that might arise if Musk makes good on his promises to censor fewer posts on Twitter. Musk’s desire to build Twitter into a subscription-driven platform also could clash with Apple and Google, who take a 15% to 30% cut of all revenue from mobile apps downloaded through their app stores.

If Twitter can’t get its content-moderation house in order, Apple and Google may step in as gatekeepers. After all, they’ve previously removed social networks, including Parler, from their platforms for that reason. In the case of Parler, the app was ultimately restored to both app stores after the social network followed a series of steps to ensure it was moderating content.

So there are two potential scenarios in which the app stores block Twitter: if it tries to circumvent in-app purchases and if it doesn’t police its content to the satisfaction of Apple and Google. That means the road to Musk creating a successful subscription service runs right through those two tech giants.

Tech layoffs are not the canary in the coal mine for the U.S. labor market, Morgan Stanley says, by Chloe Taylor

Scammers are targeting desperate FTX customers by pretending to be the DOJ and promising access to funds, by Steve Mollman

FTX collapse validates view that ‘centralized anything is by default suspect,’ says Ethereum’s Vitalik Buterin, by Joanna Ossinger and Bloomberg

TikTok is a ‘massive surveillance’ tool for China, senators warn as Biden admin weighs proposal to spare app from U.S. ban, by Ian Fisher and Bloomberg

Donald Trump responds to Elon Musk letting him tweet again by saying Twitter ‘may not make it’, by Alex Veiga and the Associated Press

End of an era. The “leap second” is officially on borrowed time. Members of an international treaty governing world measurement standards voted Friday to scrap the leap second in 2035, ending a decades-long headache for computing systems thrown off by the occasional tweak in time, the New York Times reported. First instituted in 1972, leap seconds are an occasional pause in time on the international atomic clock, which runs ever-so-fractionally faster than the Earth’s rotation. While the average human doesn’t make much of these standstills, they’re enough to wreak some havoc on computer networks that rely on down-to-the-second precision. Scientists across the globe debated for 20-plus years whether to ditch the leap second, finally reaching consensus during a meeting in France.