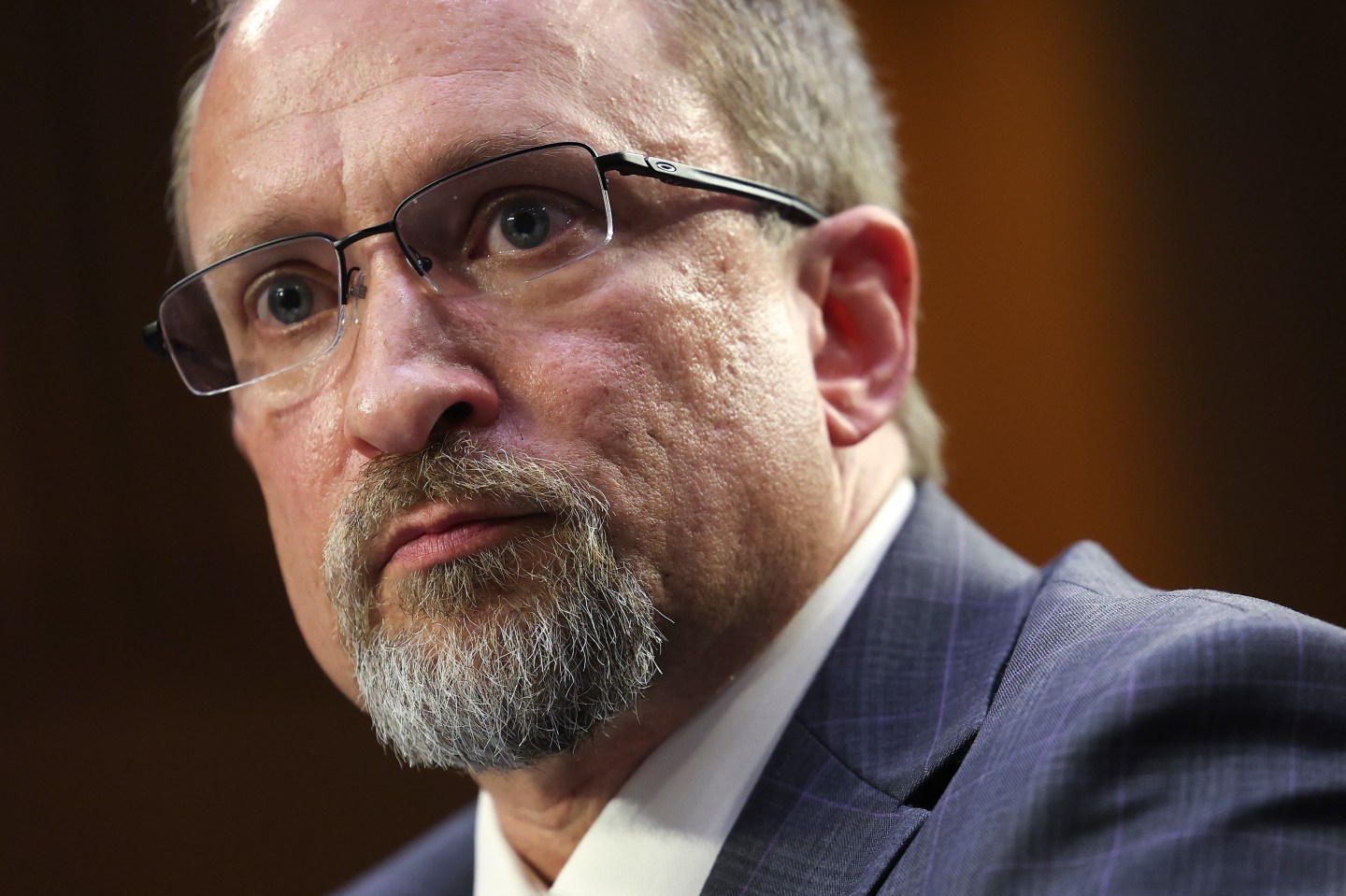 A little over an hour into the Senate Judiciary Committee’s questioning Tuesday of Twitter whistleblower Peiter “Mudge” Zatko, Sen. Marsha Blackburn (R-Tenn.) did something rare for a politician during a congressional hearing: She posed a pointed, topical question.

“Did you ever participate in calls or meetings with the [Federal Trade Commission] in which you heard specific misrepresentations made by Twitter?” Blackburn asked Twitter’s former security chief.

Blackburn went further: “So you have no direct knowledge?” Zatko: “Well, I got direct briefings from the people who were in the calls, telling me what they did.”

Twitter has an absolute mess on its hands. Zatko, a well-respected cybersecurity leader, has made a compelling case that Twitter’s leadership neglected major security issues at the social media company. His blistering criticism adds to the chaos surrounding Twitter amid Elon Musk’s attempt to back out of buying the company and long-term concerns about the platform’s business outlook.

But Blackburn’s line of questioning was one of a few developments Tuesday that should give Twitter hope that it can escape the firestorm without incurring too much legal or regulatory damage.

While Zatko carries a sterling reputation throughout much of the cybersecurity community, he has yet to present an ironclad case for his most serious allegation: that Twitter intentionally misled federal regulators.

In his 84-page whistleblower complaint and comments before the Judiciary Committee, Zatko has not provided any smoking gun–type evidence of intentionally duplicitous behavior by Twitter executives in their dealings with the FTC or the Securities and Exchange Commission. In fact, many of Zatko’s arguments are primarily based on secondhand knowledge, personal opinion, and claims that (at least for now) lack substantiating evidence available to the public.

Parts of the publicly released complaint are redacted, and additional evidence could surface through some kind of investigatory or civil litigation process. Thus, it’s too early to wholly judge the merits of his assertions.

Any such disclosure of damning behavior, however, likely won’t arrive in time to harm Twitter’s legal case for forcing Musk to buy the company at their agreed-to price of $44 billion.

Zatko’s testimony Tuesday didn’t substantially build on the allegations levied in his whistleblower complaint, giving Musk minimal new ammunition ahead of a mid-October trial to determine whether the Tesla CEO breached a purchase agreement by attempting to renege on the deal. Even after Zatko emerged in the public eye, most legal observers concluded Musk does not have a compelling defense, in part because he lacks strong evidence of Twitter making false statements that warrant scrapping the agreement.

“Twitter might be breathing a small sigh of relief right now,” Jasmine Enberg, principal analyst at Insider Intelligence, told the Financial Times. “It’s hard to imagine that this will be a real nail in the coffin. A likely scenario is that he will be able to use some of this information to negotiate a deal.”

Wall Street appeared to agree with Enberg’s assessment. Twitter’s share price, which often rises when investors feel more confident about the deal going through, increased in the hours after Zatko’s testimony concluded.

In the bigger picture, the Judiciary Committee’s reaction to Zatko’s primary solution for solving Twitter’s shortcomings—stronger regulatory enforcement of data security and privacy laws—also should hearten company executives. Multiple senators agreed with Zatko’s overarching argument for heightened monitoring of tech companies, but their solutions ranged from strange to laughable.

Sen. Lindsey Graham (R-S.C.) said he is working with Sen. Elizabeth Warren (D-Mass.) to reshape America’s tech regulatory framework, but any such efforts remain in their infancy. Considering that Congress has passed virtually no tech regulation legislation in the past two decades, it’s hard to envision this odd couple breaking that trend.

Sen. Richard Blumenthal (D-Conn.) broached the idea of forming a separate regulatory agency dedicated to tech companies and data security. But the FTC already has those responsibilities under its purview, and the agency is failing largely because Blumenthal’s colleagues in Congress don’t give it nearly enough funding to do its job.

Zatko remains a clear and present danger to Twitter’s business fortunes, particularly if regulators and lawyers start poking around the company in response to his claims. For the moment though, Twitter isn’t much worse off than it was before Tuesday.

Only one more stop. A European Union appellate court upheld nearly all of the $4.3 billion fine levied against Google in 2018 by regulators who concluded the Alphabet unit violated antitrust laws, Reuters reported Wednesday. The EU’s General Court validated regulators’ findings that Google illegally used its power to pressure smartphone manufacturers into preinstalling the company’s search and browser products. Google has not said whether it will appeal the ruling, which lowered the fine to $4.1 billion, to the EU’s highest court.

Seoul searching. South Korean authorities have issued an arrest warrant for Terraform Labs cofounder Do Kwon, who presided over the $40 billion collapse of two cryptocurrency tokens earlier this year, Bloomberg reported Wednesday. Do Kwon and five other people are accused of violating South Korean laws governing capital markets. The cryptocurrency entrepreneur has promised to cooperate with authorities, though he was not yet in custody as of Wednesday morning.

Looking behind the curtain. California enacted the nation’s first law requiring disclosure of content moderation policies and results by social media companies, the Associated Press reported Tuesday. Gov. Gavin Newsom signed the bill into law despite objections from tech companies and business advocacy organizations, who argued that social media outfits will be forced to disclose proprietary data. Advocates for the law said the mandates will give the public more information about important decisions made at powerful tech companies.

Road raise. Amazon announced plans Tuesday to spend $450 million on boosting pay and offering more benefits for delivery drivers employed by partners coordinating with the company, the Wall Street Journal reported. The extra investment aims to bolster Amazon’s Delivery Service Partners network, an initiative through which entrepreneurs start their own delivery fleets in collaboration with the e-commerce giant. Amazon did not specify how much drivers might earn in additional wages.

They just wanna talk. Big-time investors are always looking for an edge—and in the case of the Twitter–Elon Musk sale, they’re turning to private investigators. The New Yorker reported Tuesday that at least six research firms have contacted former colleagues and associates of Twitter whistleblower Peiter “Mudge” Zatko, seeking to gather dirt that could guide their bets on whether the company eventually will be sold to the Tesla CEO. The inquiries often involved requests for background on Zatko’s personality, management style, and motivations for blasting Twitter in public. In some cases, the research groups offered subjects thousands of dollars for their time and information.

Sources close to three of the firms—Farallon, Mosaic, and G.L.G.—suggested that they were simply trying to obtain information about Zatko to guide stock trades involving Twitter and maximize profits. A person familiar with G.L.G.’s business said the outreach was “an attempt to assess the credibility of the allegations” and meant “to better inform investment decisions.” A spokesperson for AlphaSights said that, “as a matter of policy and contractual obligations, we do not disclose the identity of our clients.”

Hahn, the Twitter spokesperson, told me, “We have no role in nor did we commission expert networks research regarding Mr. Zatko.” Two members of Musk’s team, who asked not to be named, owing to the sensitivity of the ongoing litigation, said that they also had no connection to the inquiries.

The Ethereum merge is hours away: Here’s ‘the big thing’ to watch for, by Taylor Locke

Canva, the $26 billion design startup, launches a productivity suite to take on Google Docs and Microsoft Office, by Emma Hinchliffe

What Snap CEO Evan Spiegel can teach executives about announcing layoffs with compassion, by Paige McGlauflin

Alphabet, Meta, and Snap have a shared threat unlike any they’ve faced before. Why TikTok is keeping the world’s most powerful CEOs up at night, by Kylie Robison

The world’s most followed TikToker gets paid as much as $750K per post, but to reach his greatest business goal Khaby Lame is binge-watching American cartoons, by Alexandra Sternlicht

Cathie Wood’s tech-heavy innovation fund has lost over 50% of its value this year, but she bought the dip in yesterday’s stock rout, by Katie Greifeld and Bloomberg

Go big or go home. If you’re planning to splurge on the new iPhone, make sure it’s the more expensive Pro version. So say the parade of tech critics whose reviews of Apple’s iPhone 14 line dropped Wednesday morning, two days before the product hits store shelves. The consensus view is that the iPhone 14 base model offers few worthwhile updates from its immediate predecessor, making it unworthy of a $799 upgrade for most buyers. The iPhone 14 Pro, however, includes enough upgrades—a long-awaited always-on display, better battery and camera features, and the clever new Dynamic Island, a pill-shaped display at the top of the screen—to warrant shelling out $899 (and up). Here’s a sample of reviews from TechCrunch, CNet, The Verge, and Wired.