The world’s most followed TikToker gets paid as much as $750K per post, but to reach his greatest business goal Khaby Lame is binge-watching American cartoons 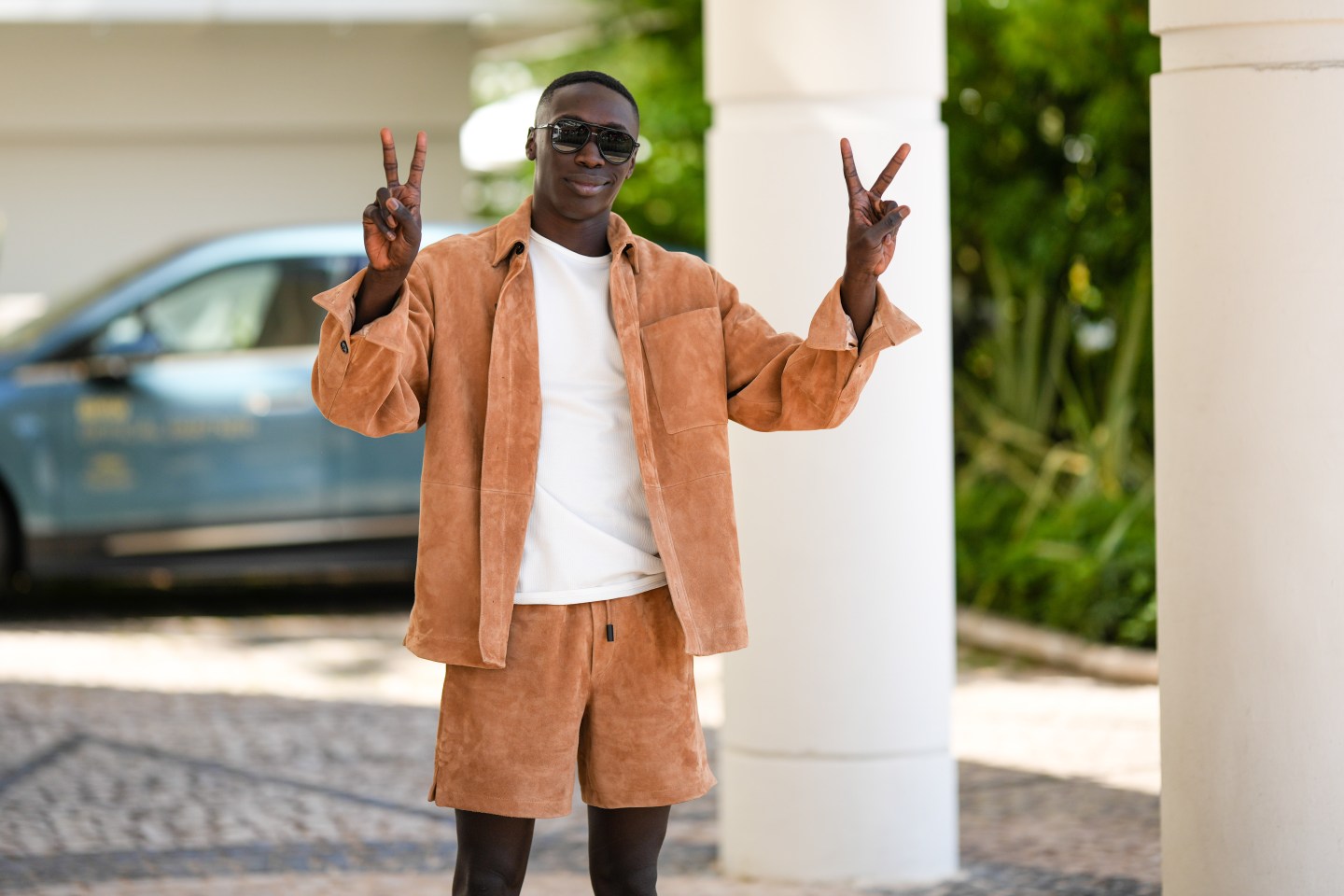 Khaby Lame has 150 million followers on TikTok. But his dreams are of Hollywood.
Edward Berthelot—GC Images

It’s 8:30 p.m. on a Friday night and the world’s most followed TikToker Khabane “Khaby” Lame lies on the couch watching cartoons. The 22-year-old with 149.5 million TikTok followers spends three hours a day learning English from a Mister Rogers’ Neighborhood–inspired animated series Daniel Tiger. His goal: master English to score roles in major Hollywood films. And so, old-school headphones in place, the 6-foot-1 star lounges on multicolor velvety cushions in the Milan flat he shares with his manager, Alessandro Riggio, to kick off the weekend.

One would expect a former manual laborer who went from government housing to commanding up to $750,000 per TikTok post—and on track to make $10 million this year, according to Riggio—to be a fixture of Milan’s bottle service bastions or Michelin-starred pasta palaces. Not Khaby Lame. The Senegalese immigrant with 2.4 billion TikTok likes is determined to become the best comedian in the world. Though his universal hilarity stems in part from the silence he maintains in his short-form slapstick videos, he believes he needs to learn English. A recent video Lame posted of himself playing a 19th-century court jester auditioning for a 50 Cent video—where the only sound was vague fiddling to “In Da Club”—garnered 95 million views. He attracted another 136 million from wordlessly self-immolating as a result of his cologne usage on Valentine’s Day. When it comes to his methods for studying English, it seems Lame is living in his own sort of life hack. In addition to working with a tutor for an hour every morning, Lame is bingeing American cartoons and movies.

“My dream is that one day we’ll win an Oscar,” says Lame in his fresh English to Fortune.

Lame’s career exemplifies the simultaneous nascency and power of top TikTokers. Brands grovel to pay Lame low- to high-six-figures—swamping Riggio’s inbox—as companies hunger to mooch off Lame’s clout. Meanwhile, Lame hopes his next big move is not starring in a big-brand ad campaign, but in a cinema blockbuster. Other top creators are trying to parlay virality into a long-term business with strategies aimed at growing their net worth. Take Charli and Dixie D’Amelio who have made $70 million in about two years, and just became venture-backed humans as they launch their $100 million (valuation) D’Amelio Brands to exert ownership of D’Amelio everything. Or Josh Richards who has transformed his TikTok teen heartthrob status into a major Amazon Video deal, VC fund, and podcast, among other initiatives. In truth, because these all-star TikTokers morphed from nobodies to household obsessions in about two years alongside the meteoric growth of the Chinese social app, there is no precedent for long-term success.

“With TikTok fame—what makes it stand out compared to other forms of fame—is that it can be very fleeting,” says Melanie Kennedy, director of education at the University of Leicester, who has authored multiple studies on visibility and TikTok. “It’s all about being as viral and visible as possible based on what users are clicking on.”

Riggio says that Lame is too famous for pedestrian life. When Lame visits his Los Angeles home, adoring fans swarm his car and physically prevent him from moving. The fans are less aggressive in Italy. Still, Lame prefers to stay inside, practice phrases from Daniel Tiger, and compete against Riggio in F1 simulation games and make content, especially when doing so involves collaboration with his heroes like Snoop Dogg.

Riggio explains that Lame is not motivated by money. “He was poor, and he doesn’t know how much he has in the bank. He doesn’t care about—”

Lame interrupts: “I like making people laugh. I love my family. I love my company.”

Like many professional TikTokers, Lame derives the majority of his income from endorsement deals. On average, brands pay Lame about $400,000 per TikTok, according to Riggio (an agency source pegs the number closer to $350,000). He has also cofounded a creative agency, Iron Corporation, with Riggio to oversee athletes’, actors’ and fellow creators’ social presences and monetization plays. Opting out of fame’s usual accoutrements like sports cars and yachts, Lame is investing in real estate, as well as restaurant and software companies.

“Most influencers get to a certain point in their career where they’ve endorsed and supported a number of brands and have a flat fee for these structures, but they start to want a bit more incentive or upside from those relationships,” says Raina Penchansky, CEO and cofounder of influencer management company Digital Brand Architects, which manages 180 creators. “That’s when we start to more meaningfully discuss ways for them to get into deeper relationships with companies or around companies they want to start.”

Lame emigrated from Dakar, Senegal, to the Turin suburb of Chivasso, Italy, with his three siblings and parents as an infant in 2001. He attended high school and worked as a factory machine laborer until he was laid off at the onset of the pandemic. Bored, he took to TikTok, sharing dances and e-sports gameplay, and speaking in Italian. It was strictly a coping mechanism until he started posting silent videos of overly complicated life hacks later in 2020. In videos of him wordlessly doing things like flipping a pot lid for storage space (responding to a life hack video), the unemployed Italian began to garner 1 million followers per day. In June of 2022, he surpassed Charli D’Amelio to become the most-followed TikToker in the world.

Where D’Amelio’s appeal is largely confined to English speakers, Lame’s wordless comedy content is accessible to anyone in reach of TikTok. That’s why brands with global audiences, like Hugo Boss and Binance, have written fat checks to guest star in Lame’s videos. Hugo Boss, a publicly traded fashion brand with a $3.7 billion market cap, recently paid Lame $450,000 to walk in their Milan Fashion Week show with a singular TikTok video to accompany the strut. A major Hollywood studio also recently paid Lame $750,000 for one TikTok, according to a contract viewed by Fortune.

Now, in his light-filled house bedecked with gaming PCs, a least a dozen different Iron Man figurines, and a basketball hoop, Lame is grappling with the question that plagues so many other top content creators: How can he outlive the death knells of changing algorithms and consumer preferences? Lame is the first to admit his time at the top of TikTok is temporary. Aside from the cool factor, he hopes to make it to the big screen to fortify his dominance beyond TikTok—and have enough money to line his closet with Air Jordans.