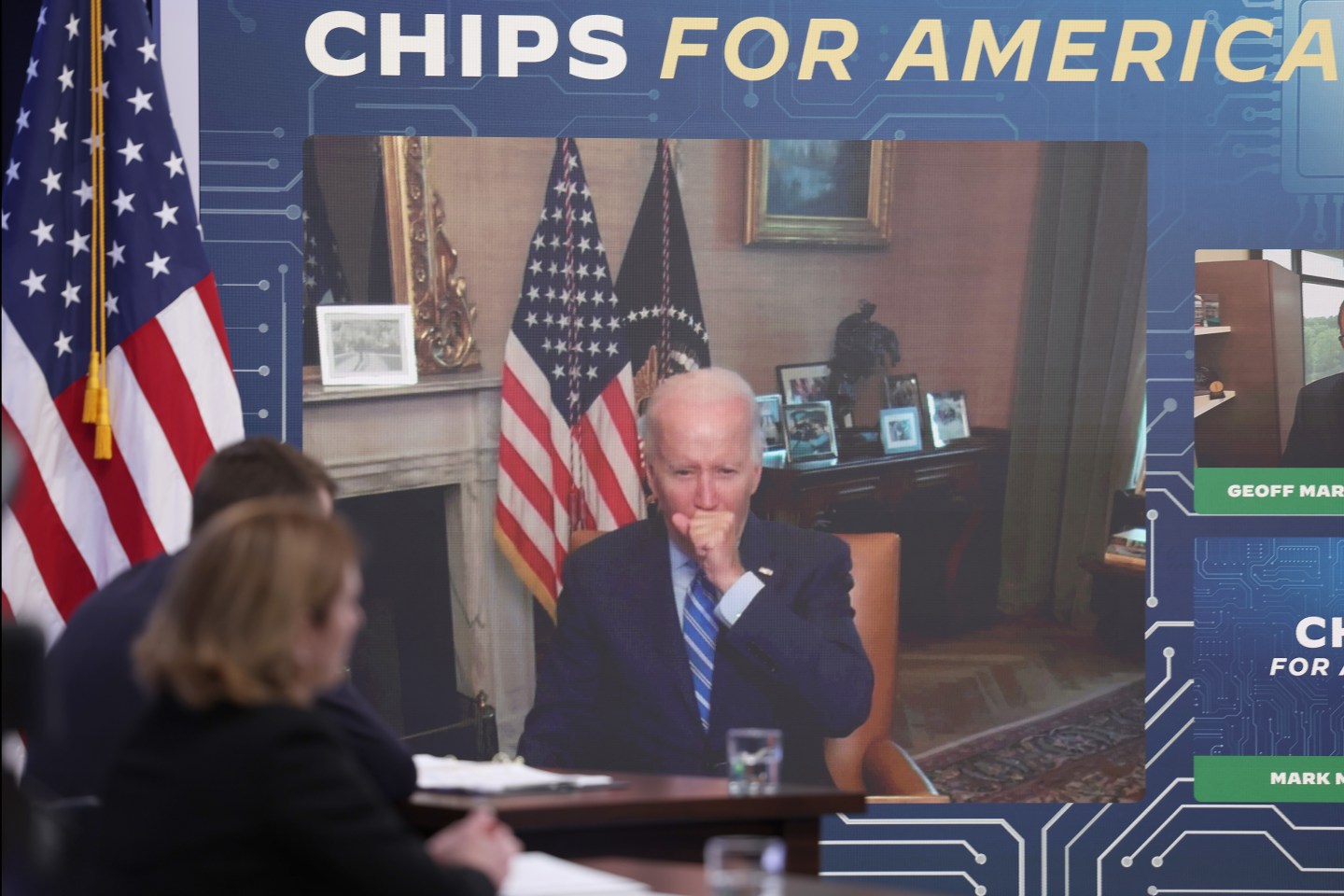 As the U.S. government sets in motion two of its most enterprising tech spending endeavors in recent memory, a cautionary tale from across the Pacific offers a dash of hope for American triumph.

It’s been nearly a decade since an ascendant Chinese government launched the so-called Belt and Road Initiative, a hugely ambitious effort to spark its economy and expand the republic’s geopolitical influence.

In the time since, Chinese officials have doled out hundreds of billions of dollars in direct spending and loans to regional neighbors, largely for basic infrastructure projects in emerging nations. They hoped that the show of goodwill would engender political support—not to mention strategic economic benefits—from countries like Pakistan, Singapore, and Malaysia amid an escalating rivalry with the U.S.

But as Nikkei Asia reported this week in the first of a three-part series, the Belt and Road Initiative has since become something of a boondoggle. Recipients of Chinese loans are unable to meet their debt obligations, triggering political strife. Locals resent intrusive construction projects that come with costly strings attached. Corruption and mismanagement have roiled nations benefiting from the largesse.

“Now it is an open question whether the BRI is a net economic benefit—or even, in many cases, a liability for its chief recipients,” Nikkei Asia reporters wrote.

The Belt and Road Initiative stands in sharp contrast to a pair of landmark pieces of tech-related legislation that have consumed Congress this summer: a science bill that contains $52 billion in subsidies for the semiconductor manufacturing industry, and a climate-and-tax bill that includes potentially billions of dollars in electric vehicle tax credits. President Joe Biden signed the science bill, commonly known as the CHIPS-Plus Act, earlier this week, while the House is expected Friday to approve the climate-and-tax legislation following the Senate’s sign-off last week.

Whereas the Belt and Road Initiative sought to curry favor by making recipient countries’ political leaders indebted to the government by exporting money and labor, the two American drives at building economic and political power take a decidedly more free-market, nationalist approach.

Both bills aim to bring high-tech infrastructure onto U.S. soil, using incentives to lure domestic and foreign investment in the States.

Rather than propping up industry-leading semiconductor manufacturers in pseudo-ally Taiwan and steadfast ally South Korea, both of which are imperiled by their proximity to China, federal policymakers hope the subsidies push companies to expand operations within American borders. In a similar vein, automakers and suppliers likely will need to quickly increase their levels of mining, sourcing, and manufacturing within the U.S. if they want to benefit from proposed electric vehicle tax credits.

The two bills also deal directly with long-established corporations that answer to eagle-eyed shareholders, bypassing the fickle and unscrupulous heads of state that complicated China’s campaign.

The U.S. legislation seeks to cajole Samsung, Taiwan Semiconductor Manufacturing Co., Volkswagen, Honda, and Toyota, to name a few. China, meanwhile, is dealing with the fallout of political miscalculations and outright greed within the governments of Cambodia, Sri Lanka, and other still-developing countries.

Most of all, Congress’s push focuses on the high-tech industries that power global trade and economic leadership. While China is busy building and financing rudimentary infrastructure, American legislators are angling to position the U.S. as a premier destination for pioneering electronics and automotive technology.

At a minimum, though, the U.S. government isn’t going down the same error-laden path as China with its influence effort. While Chinese leaders ventured outside their borders to find prosperity, the U.S. wants all roads to lead to America.

Not waiting for Congress. The Federal Trade Commission announced plans Thursday to begin the process of making rules related to consumer privacy and companies’ collection of user data, the Associated Press reported. Supporters of the effort have argued the federal government needs to curtail tech companies’ harvesting of vast amounts of user information, while opponents counter that the job of setting consumer privacy parameters should be left to Congress. FTC officials encouraged lawmakers to pass laws related to data privacy, but added that they won’t halt their own efforts while Congress debates legislation.

People love their iPhones. Apple suppliers expect to produce a similar number of next-generation iPhones this year when compared to 2021, a sign that the tech giant expects sales to remain strong despite declining global smartphone demand, Bloomberg reported Thursday. Unnamed sources told Bloomberg that Apple has told suppliers to assemble about 90 million of its latest iPhone models, which are expected to go on sale sometime in the next few months. Apple’s iPhone sales are expected to benefit from fading competition in the high-end smartphone market and consistent spending by high-income consumers.

A costly quarter. Electric-auto maker Rivian reported $1.7 billion in second-quarter losses Thursday, but the upstart manufacturer maintained its closely watched production targets for the year, the Wall Street Journal reported. Rivian’s losses tripled year over year as the company continued ramping up vehicle assembly and grappled with rising raw materials pricing. While Rivian still expects to produce 25,000 vehicles in 2022, company officials raised their projected operating loss for the year to $5.45 billion, up from earlier forecasts of $4.75 billion.

Sweeping him up. Dutch authorities arrested a 29-year-old developer accused of facilitating money laundering through Tornado Cash, a cryptocurrency platform that allows users to anonymously transfer assets, CoinDesk reported Friday. The Netherlands’ Fiscal Information and Investigation Service did not release details about the arrested individual’s involvement with Tornado Cash, other than to note that he is a developer. The arrest followed Monday’s announcement by the Securities and Exchange Commission that Americans could no longer legally use Tornado Cash because of its use for illegal purposes by online criminals.

Trouble in paradise. Converting TikTok’s massive audience into a huge payout for Chinese owner ByteDance isn’t as simple as it may seem. The Information reported Thursday that TikTok’s advertising team is enduring some tough growing pains, the result of sky-high corporate expectations and a complex operating structure. Those challenges have been amplified during TikTok’s rapid buildup of its U.S.-based ad team, which is now 10 times as large as it was in early 2020. While companies are clamoring for access to TikTok’s large and youthful user base, its ad department is dealing with high turnover and burnout rates exacerbated by ByteDance’s demanding culture.

To meet its ambitious goals, ByteDance—a hotly anticipated initial public offering candidate—is ratcheting up the pressure on TikTok’s advertising sales team. That team, led by former Meta Platforms executive Blake Chandlee, is betting big on grabbing more dollars from marketers who want to drive sales of goods like clothing and gaming products, not just those who want to build awareness for their brands—a segment that has been the bread and butter of its advertising business since the beginning.

But internal turbulence could complicate those efforts.

What Tesla’s annual general meeting signals about the future of unions on boardroom agendas, by Lila MacLellan

Outgoing Whole Foods CEO says young people ‘don’t seem like they want to work’ and thinks ‘socialists are taking over,’ by Chloe Berger

Cybersecurity guru Devin Redmond on the ‘threat actors’ making cyber such a hot sector in the private markets, by Lucy Brewster