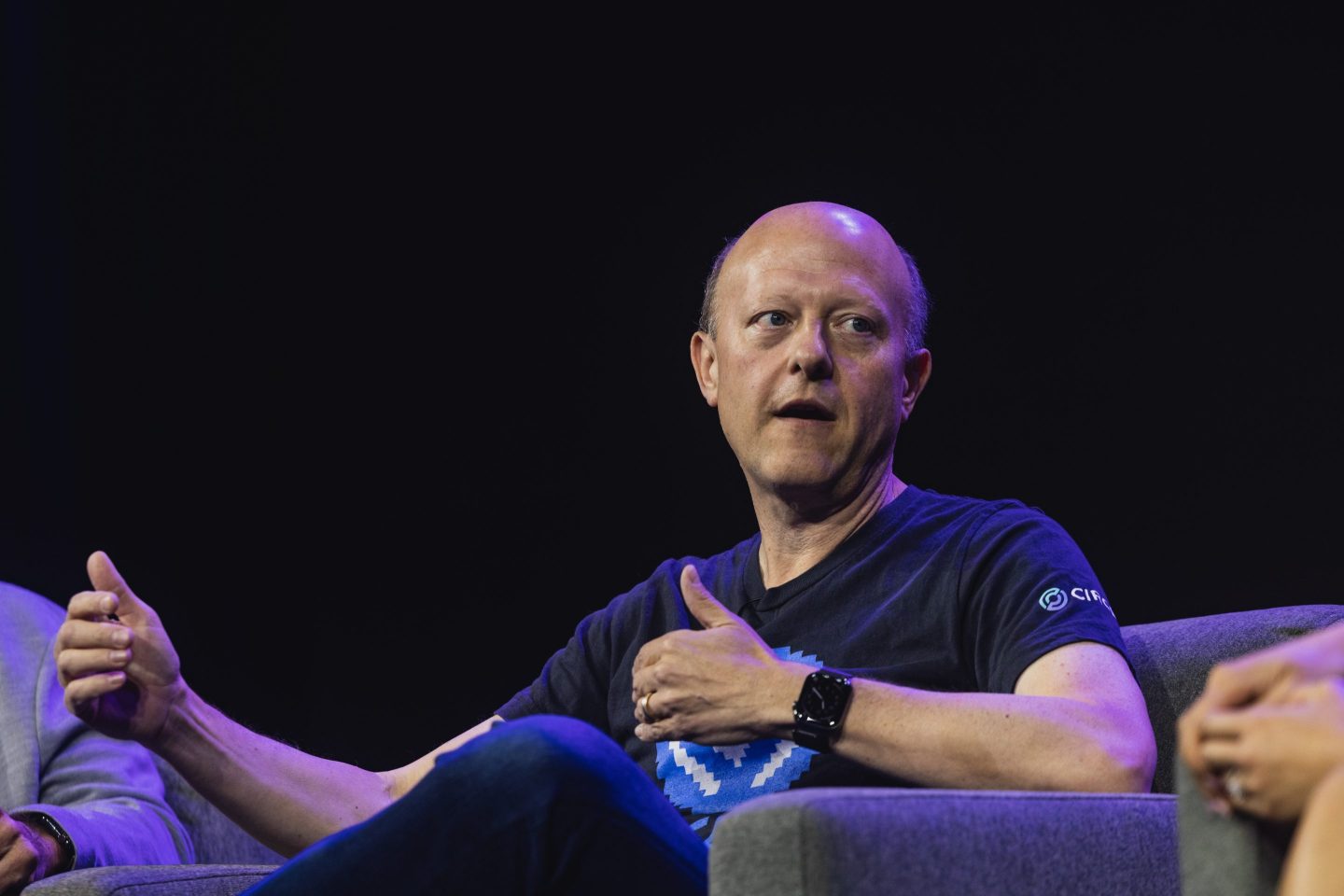 Circle CEO Jeremy Allaire told Fortune he is optimistic about the future of crypto and stablecoins.
Jordan Vonderhaar—Bloomberg via Getty Images

Jeremy Allaire, the CEO of stablecoin giant Circle, has been preparing for this moment in crypto regulation for nearly a decade.

While federal regulators left the nascent sector largely to its own devices for years, recent talk of regulation and enforcement actions by the Securities and Exchange Commission are forcing crypto companies to face a new regulatory reality.

But Allaire isn’t worried. In fact, he welcomes regulation and the clarity that could come with it. Since 2013 when he founded Circle, which created the dollar-pegged stablecoin USDC in 2018, Allaire said he has worked closely with regulators and lawmakers.

“It was very clear from very early on that we needed to, as I like to say, walk in through the front door,” he told Fortune.

The strategy appears to have paid off for Circle, which has grown to 800 employees and is now catching up to its main rival Tether, which issues the stablecoin USDT.

For many years Tether was the biggest name in stablecoins, which are cryptocurrencies backed by a pool of assets intended to peg their value to a major currency like the U.S. dollar. Just one year ago, Tether dominated the industry with a market cap of $63.3 billion while controlling 58% of the overall stablecoin market compared to Circle’s 25%. But since then, Circle has been rapidly gaining on its rival. As of Friday, USDC’s market cap has grown to $53.9 billion and now controls 35% of the market while Tether’s share has slipped to 43%, according to CoinGecko.

USDC’s gaining market share on Tether has coincided with the latter coming under increased scrutiny over the nature of its reserves. Specifically, Tether is reportedly backed by reserves that include some digital tokens and commercial paper—short-term debt issued by companies. This has concerned investors and regulators because, although the company publishes the quality of the debt it holds, it doesn’t disclose further specifics. Tether says it has been reducing the amount of commercial paper in its reserves for the past few months, and in July said that it held no commercial paper in Chinese companies, though the company has yet to publish an audit conducted by a major law or accounting firm.

A spokesperson told Fortune that Tether was reducing its holdings of commercial paper, stating “Tether continues to ensure that it has a diversified portfolio with limits to exposure on individual issuers or assets. Its reduction in commercial paper is a commitment to its community.”

Increased scrutiny and the broader crypto downturn have brought Tether’s market cap down by nearly 20% since early May, while USDC’s market cap has increased 10% over the same period.

Still, Allaire said the company doesn’t have a specific plan to overtake Tether, other than sticking to its game plan.

“I think a lot of it is just continuing to do what we’re doing and I think the market does the rest,” he said.

A big part of Circle’s roadmap is going public, which Allaire said will be finalized by the end of the year if all goes well with the SEC.

Circle is going public via a SPAC (special purpose acquisition company) in a renegotiated deal with blank check firm Concord Acquisition Corp that will value the company at $9 billion, it announced in February. A deal with Concord was initially announced last summer and Circle had suggested it would be public by the end of 2021, but the process continues to drag on, likely because of increased regulatory scrutiny of SPACs.

SPACs, which entail a publicly traded shell company acquiring a private firm, serve as a backdoor way for companies to go public. They became hugely popular in 2021, but attracted controversy since the value of many SPACs has plummeted, leaving critics to warn that SPACs often serve to enrich their backers while proving a bad deal for retail investors.

Allaire, however, says that Circle is undergoing the same regulatory scrutiny as it would through the traditional IPO (initial public offering) process. Going public could also help give its customers more confidence through the visibility that the required disclosures offer, Allaire said.

“We think that the amount of accountability, transparency, and rigor that goes into being a publicly listed company is really important, especially for a kind of financial infrastructure company like Circle,” he said.

The company’s bet on the future of stablecoins could be prescient. In 2021, the aggregate supply of stablecoins increased 388% to $140 billion, according to data from The Block Research. The U.S government and non-crypto companies are also increasingly exploring the technology.

In April, the world’s biggest asset manager, BlackRock, invested in Circle and signed a deal to become the company’s primary asset manager for its reserves and to explore capital market applications for USDC. And in June President Biden said that the U.S. could pass rules by the end of the year that define stablecoins and address how they can be used.

According to an investor presentation released when Circle first announced it would go public last year, the company makes money from three lines of business. Circle profits from transaction fees on USDC and interest earned on the reserves it holds to back the stablecoin, and also earns fees from providing companies with payments and treasury services. It also earns revenue from SeedInvest, an equity crowdfunding platform it bought in 2019 that allows investors to put money into private companies on the internet. The company reported a profit of about $3.8 million for 2020 but posted a net loss of $508.2 million by the end of 2021, according to its most recent filing with the SEC. The company’s latest quarterly results, however, show Circle being buffeted by the same headwinds as the rest of the industry. In the first quarter of 2022 alone, Circle lost $844 million. The company appears in position to weather the downturn, though, as it has repeatedly been able to raise large sums from investors.

Despite the current crypto downturn, Allaire said the future of stablecoins and the broader crypto market are bright. The recent failings of some companies like Terraform Labs, Celsius, and Voyager Digital have attracted increased criticism and regulatory scrutiny to the crypto industry, but in the long run, more guidance from regulators will be a good thing, for Circle and the broader ecosystem, he said.

“On the whole it should be a good thing for setting us up for the phase when (crypto) does start to reach billions of people, which I think is the next major phase of this,” he said.