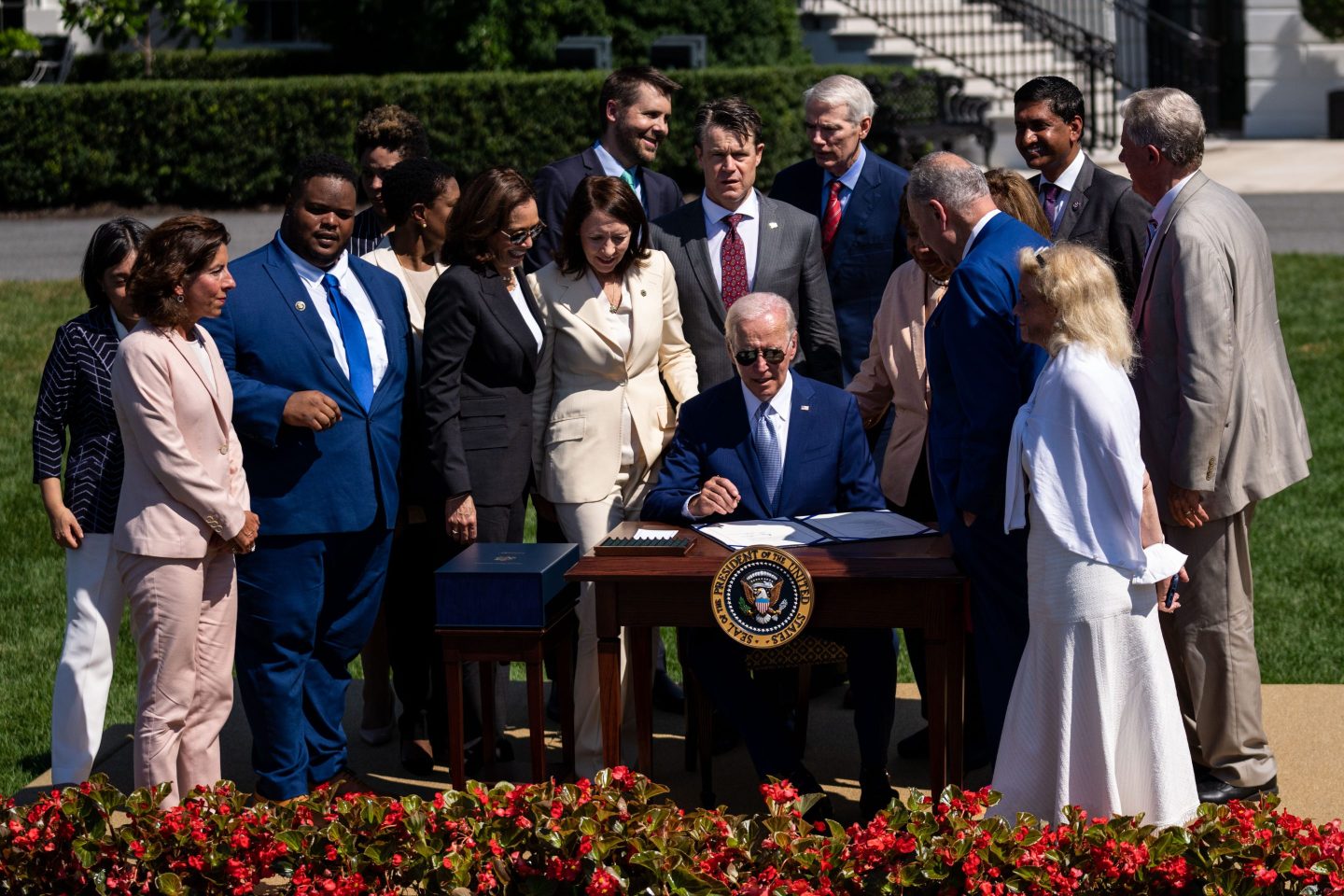 U.S. President Joe Biden signed the CHIPS and Science Act on Tuesday, ending an almost yearlong saga to spend $52 billion to attract chip manufacturing back to the U.S.

Surrounded by members of Congress from both parties and representatives from the chipmaking industry, Biden called the act “a once-in-a-generation investment in America itself” that would bring jobs back to the U.S. and lower costs for consumers.

But Idaho-based Micron delivered a far more somber message in a regulatory filing that same day, warning investors that its fourth-quarter sales would come in at the low end, if not below, previous forecasts. Micron had earlier predicted sales of $7.2 billion, which was already lower than the $9.1 billion predicted by analysts.

Micron’s warning reflects a slowdown in demand for chips across the industry that’s arriving just as the CHIPS Act passes and chipmakers prepare to break ground on new U.S. plants. The poor timing provides an unfortunate backdrop to the long-awaited legislation, which all parties—chip CEOs, lawmakers, and Biden himself—are eager to tout as a huge win.

For much of the COVID pandemic, semiconductors—tiny chips that power not just computers and smartphones, but cars, home appliances, and countless other electronic devices—were in short supply, as stuck-at-home consumers bought more devices to get them through lockdown. The shortage paralyzed manufacturing, but also led to record profits for chipmaking companies.

But now chip CEOs are worried that an oversupply of chips will drag down sales and profits for the rest of 2022 and into 2023. Consumers, returning to normal life in this stage of the pandemic and worried about inflation, are buying fewer consumer electronic devices, lowering demand for the semiconductors that power them.

Semiconductor sales will increase only 7.4% this year, predicts consulting firm Gartner, far below the 26% growth reported in 2021.

Micron CEO Sanjay Mehrotra told Bloomberg that the drop in chip demand was now expanding beyond consumer electronics to hit other sectors that seemed to be more resilient, like data centers and the automotive sector.

Other U.S.-based chip companies are struggling, too. On Monday, Nvidia slashed its revenue guidance for the current quarter by 17%, led by a 33% decline in gaming-related revenue. (Nvidia will officially publish its second-quarter earnings on Aug. 28)

Intel earlier reported a net loss of $454 million for the second quarter of 2022, and warned that PC sales would fall by 10% this year.

Both Micron and Intel—which hope to receive government funding under the CHIPS and Science Act—say their plans to invest in the U.S. would not change as a result of these short-term struggles.

But even Asian chipmakers are warning that demand is softening. In its second-quarter earnings call, TSMC told investors that its customers might work through their stockpiles, built up during the shortage, rather than place new orders. SK Hynix is also reportedly considering shrinking its 2023 capital expenditure plans owing to the expected drop-off in demand.

For now, chipmakers are only warning about demand in the near future. The CHIPS Act is aimed at the long term. Chip factories can take years to build; Intel expects to open its $20 billion facility in Columbus by 2025. Plus, lawmakers and the administration have framed the chips legislation as a national security issue, not necessarily as a way to meet current demand, arguing that the U.S. needs domestic manufacturing to safeguard its own supply of chips for advanced devices, like leading-edge military technology.

The CHIPS Act, passed on a bipartisan basis by Congress and signed by Biden on Tuesday, spends $280 billion to expand U.S. research and development. Lawmakers and Biden administration officials said the bill would solidify the U.S.’s technological advantage against rivals like China.

Congress delayed approving the money for chipmaking subsidies for over a year, frustrating chipmakers who argued that their U.S. projects required public money.

Yet the conditions attached to government subsidies may lead to long-term changes to the chip supply-chain globally. The CHIPS and Science Act bars companies that receive U.S. subsidies from expanding manufacturing of advanced chips in China.

Both Samsung and SK Hynix are reportedly evaluating shifting manufacturing out of China to other locations. On Friday, Samsung CEO Roh Tae-moon announced that the company would invest $3.3 billion in semiconductor manufacturing in Vietnam.