Nancy Pelosi’s Taiwan trip has intensified the U.S. and China’s chips showdown. Now the world’s chipmakers may be forced to pick a side 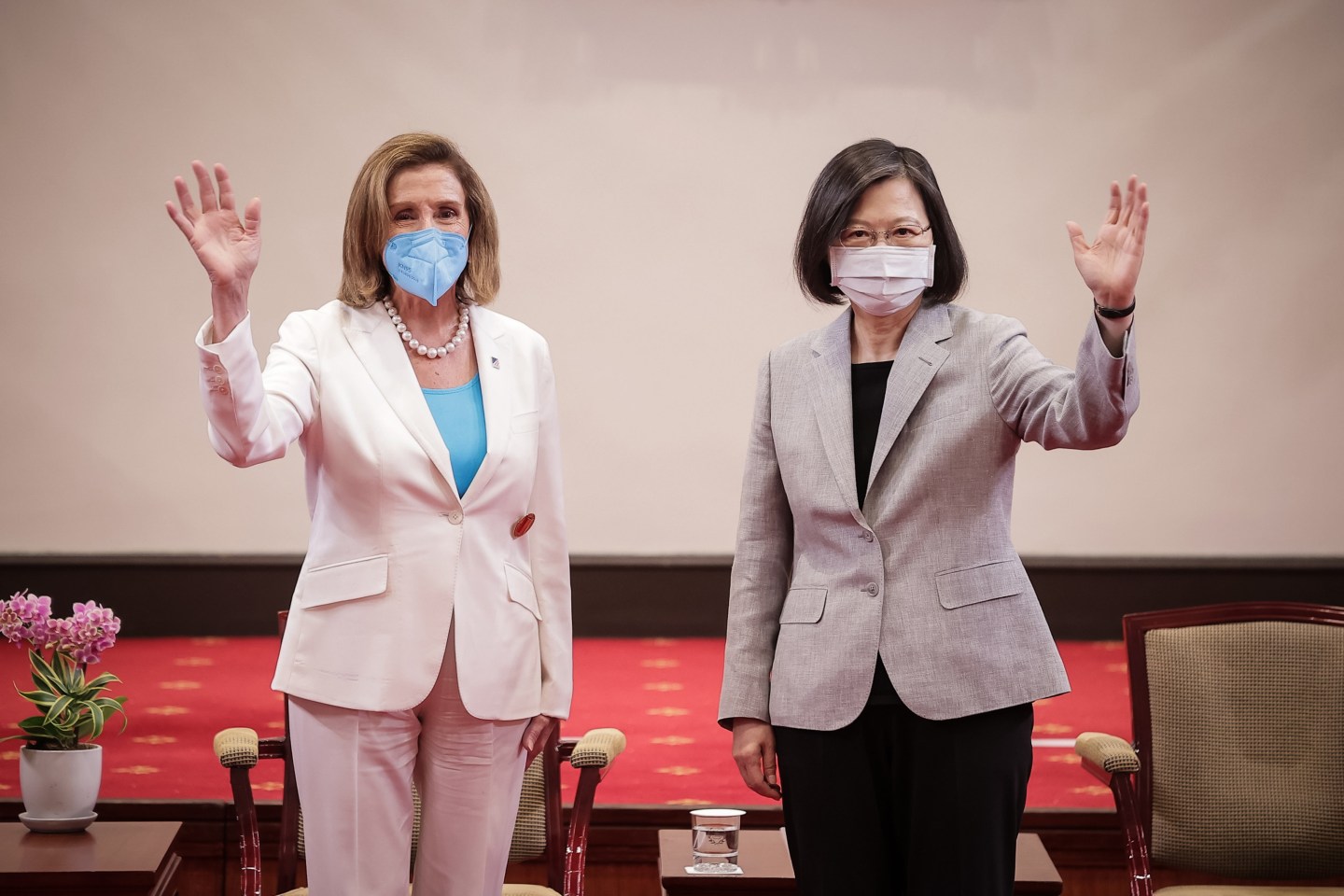 Speaker of the U.S. House Of Representatives Nancy Pelosi (D-CA), left, poses for photographs with Taiwan's President Tsai Ing-wen, right, at the president's office on August 03, 2022 in Taipei, Taiwan.
Photo by Handout—Getty Images

Her trip boosted U.S.-Taiwan relations at a time when Washington’s ties with Beijing are becoming increasingly frayed. Pelosi vowed that the U.S. would protect Taiwan’s democratic self-rule. “America’s determination to preserve democracy here in Taiwan remains ironclad,” she said in a Wednesday meeting with Taiwan President Tsai Ing-wen.

Pelosi’s politically charged Taiwan tour ignited Beijing’s fury. China, which considers Taiwan to be a breakaway territory, denounced Pelosi’s visit as “extremely dangerous” to geopolitical stability. Following Pelosi’s visit, Beijing conducted its largest-ever military drills near Taiwan, encircling the island with live rocket and ballistic-missile fire. On Friday, China announced that it is halting cooperation and dialogue with the U.S. on issues ranging from climate to cross-border crime prevention, illustrating that Beijing is intent on pushing back against the U.S. on what it views as interference in Chinese affairs.

But perhaps most importantly for the business world, the recent events have intensified the growing Sino-American showdown in the global economy’s most vital sector: semiconductor chips. The U.S.-China chips battle, which has been brewing for years, has now reached a critical crossroads, and experts say that the world’s chipmakers could soon be forced to choose between Washington and Beijing as the two superpowers jostle for technological and economic dominance.

Race to the top

Washington and Beijing are locked in a fierce race to become the global leader in high-tech industries like artificial intelligence, biotechnology, and semiconductors. Semiconductor chips, the building blocks that power everything from smartphones and household appliances to data servers and military equipment, are a primary battleground. Both countries have framed the race to become a chips superpower as critical to their own national and economic security.

Seven years ago, China launched its Made in China 2025 blueprint, which outlines its ambitions to dominate advanced technology—including a target to produce 70% of the chips it uses at home by 2025 (though it remains far short of this goal).

Last week, Washington made a big step forward in its efforts to stay competitive. On July 29, Congress passed the CHIPS Act—landmark legislation that earmarks $52 billion in subsidies for America’s semiconductor sector, which made clear its intentions to shore up its homegrown chip industry. Around $39 billion will be allocated for building new chip fabrication plants, known as fabs, on U.S. soil.

Pelosi’s Taiwan tour may have scored another point for the American team. Her short trip included a vital meeting with Mark Liu, CEO of Taiwan Semiconductor Manufacturing Company (TSMC)—the world’s biggest and most valuable chipmaker. The firm produces 90% of the world’s leading-edge chips.

So far, TSMC has eschewed taking sides between the two rival countries, because of the importance of both the U.S. and China to its business. But Liu’s meeting with Pelosi signaled a willingness to side with Washington and smashed “any semblance of [TSMC’s] neutrality,” Bloomberg’s Tim Culpan wrote this week.

Pelosi’s trip, plus the passage of the CHIPS Act and earlier U.S. export controls that decimated TSMC’s China revenue, have resulted in “an environment where…TSMC’s size and prowess will ensure it remains everybody’s foundry—except China’s,” he wrote.

‘Businesses will have to pick a side’

The culmination of recent events reinforced that businesses could soon be compelled to choose a side in the longstanding tug-of-war between Washington and Beijing.

Beijing’s response to Pelosi’s Taiwan visit—which included trade sanctions on Taiwan—was relatively constrained, Mark Williams, chief Asia economist at research firm Capital Economics, wrote in a Wednesday note. At the moment, China is avoiding any major retaliation because of Taiwan’s importance to the Chinese economy. Electronics make up the biggest share of Taiwanese exports to China, and semiconductors are the single largest product. If Beijing slaps sanctions on Taiwan chipmakers, it would “wreak havoc in Chinese industry [and] may not hurt Taiwan’s producers,” given the heightened chip demand worldwide, Williams wrote.

Still, China’s military display following the Pelosi visit shows that its security interests could supersede global cooperation, Vashistha, founder and CEO of Supply Wisdom, a risk management firm and U.S. Department of Defense’s defense business board, told Fortune. This means that “businesses will have to pick a side, especially when it comes to critical supply chains,” he said.

The U.S. is now considering restricting U.S. chipmaking equipment from being exported to Chinese memory chip makers, which would be the first time the U.S. restricted shipments to those producers that don’t have specialized military applications. The move would hurt global chipmakers like South Korea’s Samsung and SK Hynix, which have memory chip operations in China.

Yet the world’s biggest chipmakers in Taiwan and South Korea are likely inclined to side with the U.S. for a few key reasons, Jon Bathgate, investor at NZS Capital, an investment management firm focused on semiconductors, told Fortune.

The U.S. lags Asia in semiconductor manufacturing, but it remains a global leader in advanced semiconductor design and equipment. The U.S. accounts for over 80% of the world’s chip design equipment, over 50% of the core intellectual property for chip designs,  and around half of the globe’s chip manufacturing equipment, according to the Boston Consulting Group. This means that the chip manufacturing powerhouses in Asia need U.S. designs and hardware to produce high-tech chips. Plus, the majority of these chipmakers’ wholesale customers are U.S.-based. The U.S. for instance, makes up 64% of TSMC’s sales. Those top customers include smartphone giant Apple, which accounts for a quarter of the Taiwanese firm’s revenue.

“This has given the U.S. a lot of leverage relative to China when it comes to advocating for investment and partnership,” Bathgate says.

Some say global chip giants are already pivoting to the U.S. market. The CHIPS Act, which would bar recipients of U.S. government funds from expanding or upgrading their advanced chip capacity in China, have compelled South Korean firms to review their Chinese operations.

They’re “accelerat[ing] the shift from the U.S. to China,” said Kim Young-woo, head of research at SK Securities and a South Korean government adviser on semiconductor policy, in a Financial Times report published earlier this week. “They’ve been rethinking their strategies because of the U.S.-China technology war and they are now tilting further towards the U.S. because of geopolitical risks.”

South Korean electronics giant Samsung is already building a $17 billion fab in Texas—its biggest-ever U.S. investment—while TSMC is spending $12 billion on an Arizona plant. For global chipmakers, the “key driver” for building plants in the U.S. is “continued access to the U.S. market and technologies,” Bathgate says.

But picking a team may not be so easy.

China remains the world’s largest importer of chips and the biggest buyer of semiconductor manufacturing equipment. By some accounts, China has spent $100 billion on building its chip industry—and it’s set to spend even more. Shares of Chinese chipmakers surged this week as investors interpreted Pelosi’s visit as a boon to China’s chipmakers that will spur Beijing to plow more money into homegrown manufacturers.

And despite U.S. pressure on chipmakers to stop investing in China and providing the country with advanced chip technology, companies like TSMC need both U.S. and Chinese markets and will “try hard to avoid being forced to choose sides,” Dexter Roberts, senior fellow at the Atlantic Council’s Asia Security Initiative and author of The Myth of Chinese Capitalism: The Worker, the Factory, and the Future of the World told Fortune. In a CNN interview this week, TSMC CEO Liu noted that the company and China still depend on each other.

South Korean and Taiwanese companies pivoted to China previously because of the cheap costs of manufacturing in the country. These chip giants will be leaning heavily on the CHIPS Act’s subsidies, given high manufacturing costs in the U.S. But as some experts note, the bill’s subsidies, parceled out in no more than $3 billion grants, may be insufficient to galvanize chipmakers to shift their supply chains in any meaningful way.

Businesses would incur major costs and disruptions from cutting themselves off from China, Rosenzweig says, meaning that “most companies would be very reluctant to consider a complete break with China.”