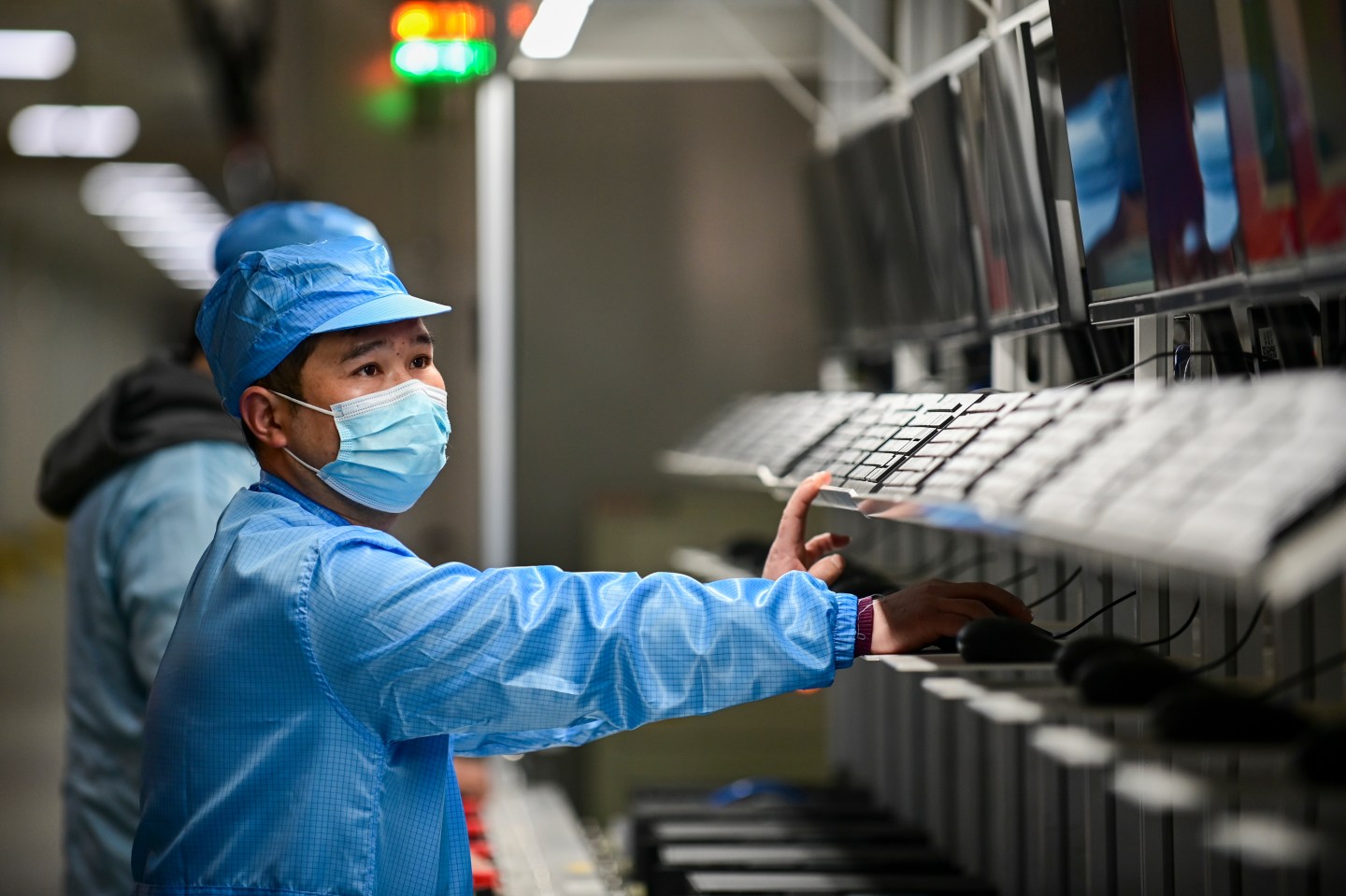 On the assembly line of a computer manufacturing enterprise set up by Tsinghua Tongfang Co., in February 2022, in Jinhua, Zhejiang province, China.
Hu Xiaofei/VCG/Getty Images

Two stories have dominated the semiconductor sector over the past week: the imminent passage of $52 billion in federal subsidies for chipmakers, and House Speaker Nancy Pelosi striding across a Taiwanese tarmac en route to meeting with the world’s largest chip manufacturer.

A third, under-the-radar development, however, might go down as the most consequential piece in this eventful “summer of semis.”

As Bloomberg and other news outlets reported this week, the landmark CHIPS-Plus legislation set for President Joe Biden’s signature includes a provision designed to handicap Chinese chip manufacturing for decades to come. The move could put America back on a path to semiconductor supremacy—or further inflame long-simmering tensions between two geopolitical and military giants.

The little-discussed language in the CHIPS-Plus bill specifies that semiconductor producers accepting American subsidies cannot materially expand advanced chip manufacturing in China for 10 years. The U.S. defines “advanced” chips as those with circuits smaller than 28 nanometers, which are already required for virtually all new smartphones, vehicles, factory equipment, and other electronics. Smaller nanometers make for more powerful chips.

Bloomberg reported that Taiwan Semiconductor Manufacturing Co., which produces about 90% of the world’s most advanced chips, is the only potential CHIPS-Plus subsidy recipient currently making sub–28-nanometer semiconductors in China, though Intel also lobbied against the restriction.

In essence, the provision would halt virtually all modern chip manufacturing in China by companies benefiting from the U.S. government’s benevolence, potentially preventing China from turning its extensive manufacturing base into a future hub of advanced chip fabrication.

The bill’s anti-China stipulation is already causing some of top chipmakers to reexamine their plans.

The Financial Times reported Tuesday that Samsung, which aspires to overtake TSMC as the world’s largest producer of advanced chips, and one of its smaller South Korean counterparts, SK Hynix, are reevaluating their Chinese fabrication footprint. The FT cited sources familiar with the views of both companies, including one senior Korean official who said several investments in China likely will be “abandoned.”

Korean chipmakers “have been rethinking their strategies because of the U.S.-China technology war, and they are now tilting further towards the U.S. because of geopolitical risks,” Kim Young-woo, head of research at Seoul’s SK Securities and an adviser to the Korean government on semiconductor policy, told the FT.

As it is, the world’s three leading chipmakers—Samsung, TSMC, and Intel—are all in the early stages of building semiconductor plants in the U.S., with each complex expected to cost at least $12 billion to $20 billion. The bill’s anti-China restrictions, as much as any of the hefty financial incentives being doled out by the U.S. government, could help bring chip manufacturing back to American soil.

Will China respond to what will likely be viewed domestically as “bullying” by the U.S. over its technological development capabilities?

After the tit-for-tat tariffs and restrictions on tech trade that began during the Trump administration, it’s not difficult to imagine the bill’s anti-China stipulation mushrooming into a broader conflict. And given how deeply connected American businesses are to China for general manufacturing needs, chipmakers and other tech companies could end up being caught in the middle of an unwelcome geopolitical standoff.

For now, some experts believe U.S. and Asian chipmakers face relatively minimal risk of retaliation by China. That’s because China is still heavily reliant on foreign semiconductor producers for the advanced chips that it needs to assemble cars, smartphones, and other products at its factories.  China doesn’t have the capability to produce leading-edge chips on its own. As a result, Chinese leaders have little to gain from levying sanctions against chipmakers like TSMC, Samsung, and the like.

But if China’s domestic semiconductor companies, which are heavily subsidized by the government, catch up on the technological front at some point in the future, the situation will be different.

“Maybe after five, 10 years down the road…if the tables have turned in a sense that Chinese companies are supplying most of the semiconductors for China, and they don’t need to rely on TSMC and Samsung, then they will be in a position to sanction companies that take the U.S. government money,” Louis Lau, director of investment at advisory firm Brandes Investment Partners, told Nikkei Asia.

China has, to date, shown little evidence that it will keep pace with its Taiwanese, South Korean, and American semiconductor rivals. But perhaps it just hasn’t had enough motivation to do so.

Wandering the forest. Digital trading platform Robinhood announced plans Tuesday to lay off nearly one-quarter of its workforce following a dramatic decline in revenue to start the year. Robinhood CEO Vlad Tenev said the pandemic darling overhired in anticipation of continued growth beyond 2020 and 2021, a period during which retail traders flocked to the company’s platform. The layoff disclosure coincided with Robinhood’s release of second-quarter earnings, which showed a 44% decline in year-over-year revenue as retail investors sour on equities trading. Robinhood shares rose 12% in midday trading Wednesday.

Woe the upper-class car buyer. Upstart electric-auto maker Rivian on Tuesday criticized a Senate proposal that would limit new electric vehicle tax credits to certain customers, arguing the restrictions would hurt the company’s growth at a critical time in its development, the Wall Street Journal reported. The legislation, included in a sweeping spending-and-tax bill moving quickly through the Senate, would extend a $7,500 tax credit to car buyers who purchase a vehicle that costs less than $80,000 and have a household income of $150,000 as an individual or $300,000 as a married couple. While Rivian’s trucks and SUV start at under $80,000, most sell above that price.

Gaining some ground. Advanced Micro Devices achieved record sales in the second quarter, but the chipmaker’s stock price slipped 1% following a second-half forecast that fell slightly short of Wall Street’s expectations, MarketWatch reported. AMD’s revenue reached $6.55 billion, a 70% jump from the prior year, as its data center business boomed and gaming sales surged. However, the semiconductor company told analysts that a decline in PC sales will likely weigh on its bottom line for the rest of the year.

In service to investors. Apple’s burgeoning services business encompasses a sprawling list of offerings, ranging from music streaming to video games to the App Store. But investors gain virtually no insight into the financial health of each unit when Apple releases its quarterly earnings. Bloomberg’s Martin Peers made the case Tuesday for greater transparency at the notoriously secretive Apple, arguing that Wall Street deserves more information on a huge part of the company’s bottom line. Apple reported $68.4 billion in services revenue in 2021, up from $46.3 billion in 2019.

Consider this puzzle about the most recent quarter: Despite listing advertising as a key driver of growth, Cook told analysts that digital advertising “was clearly impacted by the macroeconomic environment.” You have to wonder what the App Store contribution is like if digital advertising is dampened by the economy but is still the leading source of growth.

The need to know more will only grow in the current quarter. Apple executives told analysts growth in services revenue would decelerate further in the third quarter because of  “macroeconomic factors and foreign exchange.” What we really need to know is what’s going on with the App Store.

The Solana wallet hack: What we know so far, by Taylor Locke

Mystery of the ‘meme stock’ no one had ever heard of that went from $1 billion market cap to over $400 billion in a matter of days, by Christiaan Hetzner

Why Meta executives are fleeing Silicon Valley, by Sophie Mellor

A precious metals shortage is pushing Nissan to rent, not sell, electric vehicles to customers, by Tristan Bove

How a femtech app is using A.I. to fill in the gaps for women’s health care, by Lindsey Tramuta

Beyond Airbnb: There are also services that let you rent out your pool—and your backyard, by Chris Morris

I lead the Consumer Technology Association and I’ve never commented on an FTC lawsuit until now. Lina Khan’s new case against Meta is laughable, by Gary Shapiro

A batty decision. Streaming giants prize content above all, so Tuesday’s New York Post report that Warner Bros. Discovery will completely shelve Batgirl without even tossing the $75 million–plus project onto HBO Max sent Hollywood into a tizzy. Was the forthcoming film, as the Post reported, so “irredeemable” that the newly merged company’s leadership wanted to save it from Catwoman-like ignominy? Was it an unfortunate casualty of Warner Bros. Discovery’s pivot toward thriftiness? Did company officials see the movie as a potential post-merger tax write-off, as Variety and Deadline reported? While they await answers, the crew behind Batgirl can at least commiserate with the folks from fellow WBD castoff CNN Plus.