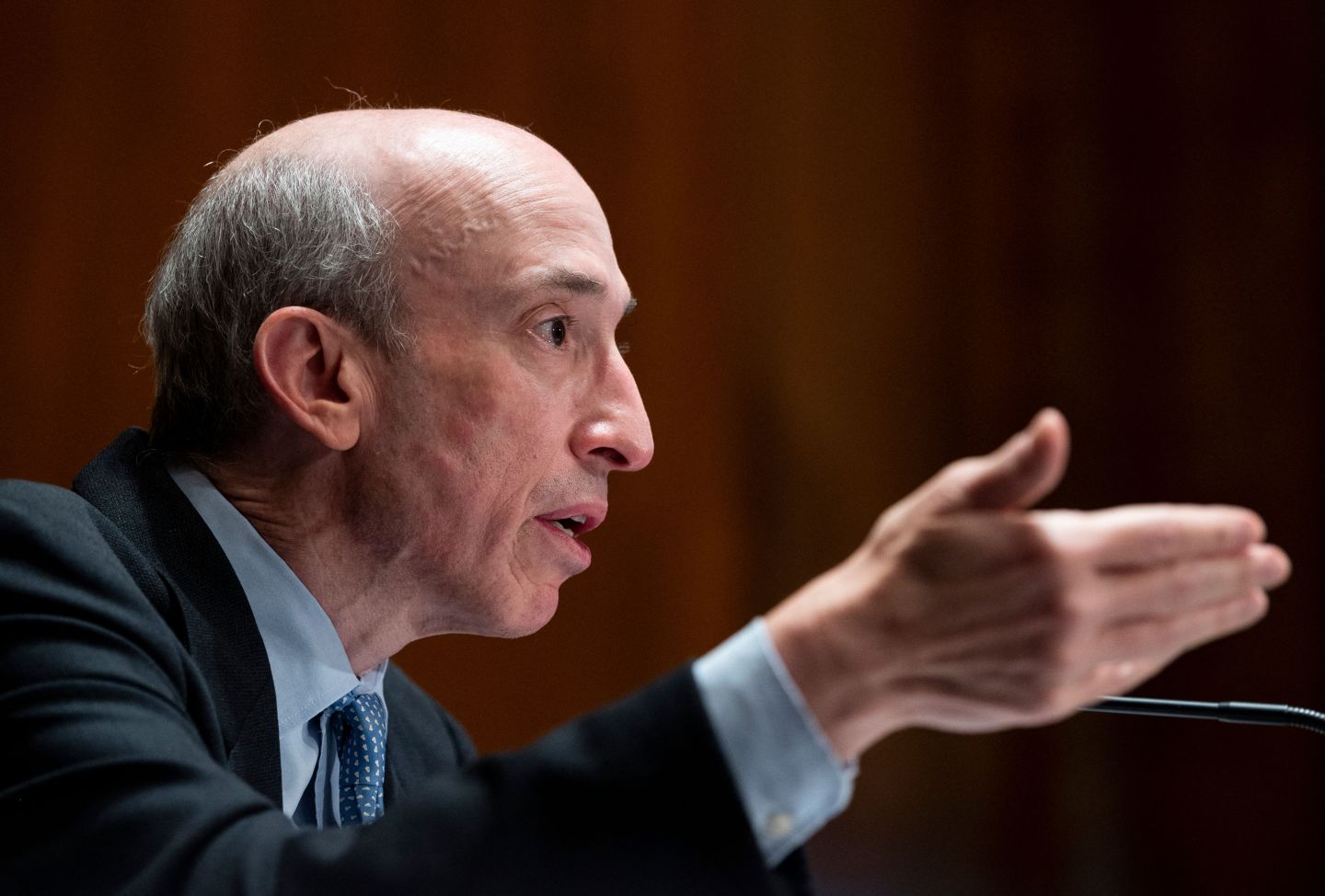 A new meme stock may cause problems for SEC Chair Gary Gensler.

What in the world is AMTD Digital, and who is behind it?

That’s the question many investors are asking themselves after an unknown company out of Hong Kong managed to join the ranks of the global megacaps worth around a half-trillion dollars on Tuesday.

It started when the American Depository Share (ADS) with the ticker code HKD gapped at the open, vaulting 25% over the previous closing price just as trading began before going on to hit an intraday high at $2,555.

At its peak it more than tripled in value and reached a market cap of over $450 billion, more than Facebook parent Meta or Chinese online retailing giant Alibaba.

And it did so on a daily volume of just 350,500 shares, according to data from Yahoo Finance, its lowest since the ADS began trading and far below the 1.2 million that had been traded on average.

Even if it has now shed a quarter of its value on Wednesday, it’s still worth around $240 billion, making it more valuable than Toyota, Nike, McDonald’s, or Walt Disney.

Needless to say, this was an impressive performance for a company that sold 16 million shares at $7.80 each in mid-July, which gave it a market cap of around $1 billion.

What is behind the surge?

There’s seemingly no justification whatsoever for that kind of market cap.

Total income-generating assets on its balance sheet barely broke the $400 million mark as of March according to SEC filings, a minnow in the world of high finance. Fortune sought to contact the company, but emails and calls were not immediately answered.

A look at its website reveals little of its business model. Its brief one-minute-long corporate presentation video markets the firm as a “one-stop digital solutions platform in Asia and a fusion reactor for the best entrepreneurs and ideas in the digital age” using a distinctly Star Wars–like aesthetic.

A deeper look into its prospectus filed with the SEC reveals what that means.

AMTD Digital basically sells a kind of club membership to its “SpiderNet Ecosystems Solutions,” which claims to bring benefits by connecting businesses to each other. This makes up the overwhelming bulk of its $25 million in annual revenue generated in the fiscal year that ended in April 2021.

Rather unusually, its pretax profits for the past three years have been consistently higher than its top line thanks to fair value accounting gains on its economic interests in companies like Appier, DayDayCook, WeDoctor, and five Asian fintechs.

The company’s parent is AMTD Group, a Hong Kong conglomerate that lists investment banking, hotel services, premium education, and media and entertainment as its core competencies. It also has another subsidiary, AMTD IDEA, listed on the New York Stock Exchange as well, though this is worth only $14 billion.

Why exactly AMTD Digital listed in the U.S. is unclear, as it immediately warned investors in its share sale prospectus it could eventually be forced to delist under SEC rules.

That’s because red tape put in place by Beijing is currently preventing its Chinese auditor from being inspected by the U.S. Public Company Accounting Oversight Board established under the Sarbanes-Oxley Act.

This has been an ongoing source of frustration for investors in many Chinese stocks. Should the U.S. and China fail to reach a deal, roughly 261 U.S.-listed Chinese companies with a combined market value of $1.3 trillion face delisting.

Parent AMTD Group’s chairman and CEO, Calvin Choi, left his job as a managing director at UBS to take over.

His capitalist history and distinction as a Young Global Leader with the World Economic Forum doesn’t prevent him from extolling the strengths of mainland China’s Communist party, or celebrating the “glory and dream of the Great Rejuvenation of the Chinese nation” a century after its founding.

Despite boasting an executive vice chairman with a record of tackling corruption and links to Carrie Lam—Beijing’s previous proconsul in Hong Kong—Choi himself is, however, reportedly being targeted for a two-year industry ban by the city’s securities regulator after investor China Minsheng Investment Group accused Choi of wrongdoing.

“Some projects [undertaken with funds from CMIG] actually made money, but he didn’t give us the profits,” a senior executive from the company told China’s Caixin back in October 2020. “Some had losses, but we don’t know whether he truly invested or misappropriated the money.”

In the world of fundamental analysis, where companies are valued based on their future cash flows, AMTD Digital’s mind-boggling market cap is the kind of seismic anomaly in the financial system that statistically speaking should come along only once every hundred years.

Even AMTD Digital seems to be at a loss as to why it is now so valuable. Using a thank-you letter to its newly minted shareholders as opportunity, it claimed it, too, was baffled by the performance of its stock.

“During the period since our initial public offering, the Company noted significant volatility in our ADS price and also observed some very active trading volume,” it wrote on Tuesday. “To our knowledge, there are no material circumstances, events, nor other matters relating to our Company’s business and operating activities since the IPO date.”

With that kind of jump, it’s no surprise that permabears emerged from their slumber. Noted short-seller Jim Chanos asked if “we’re all just going to ignore the 400 billion meme stock in the room,” while Hindenburg Research’s Nate Anderson called its controlling owner AMTD Group “sketchy.”

The run-up triggered painful memories of Robinhood’s fateful decision to remove the ability for retail investors to place buy orders on retail chain GameStop, seen as a decision to protect a handful of hedge funds deep underwater on the meme stock.

“So why wasn’t the buy button removed for HKD?? Because retail wasn’t behind it?” replied one Twitter user to Gensler on Tuesday. “Fraudulent stock market for real. You’re useless.”