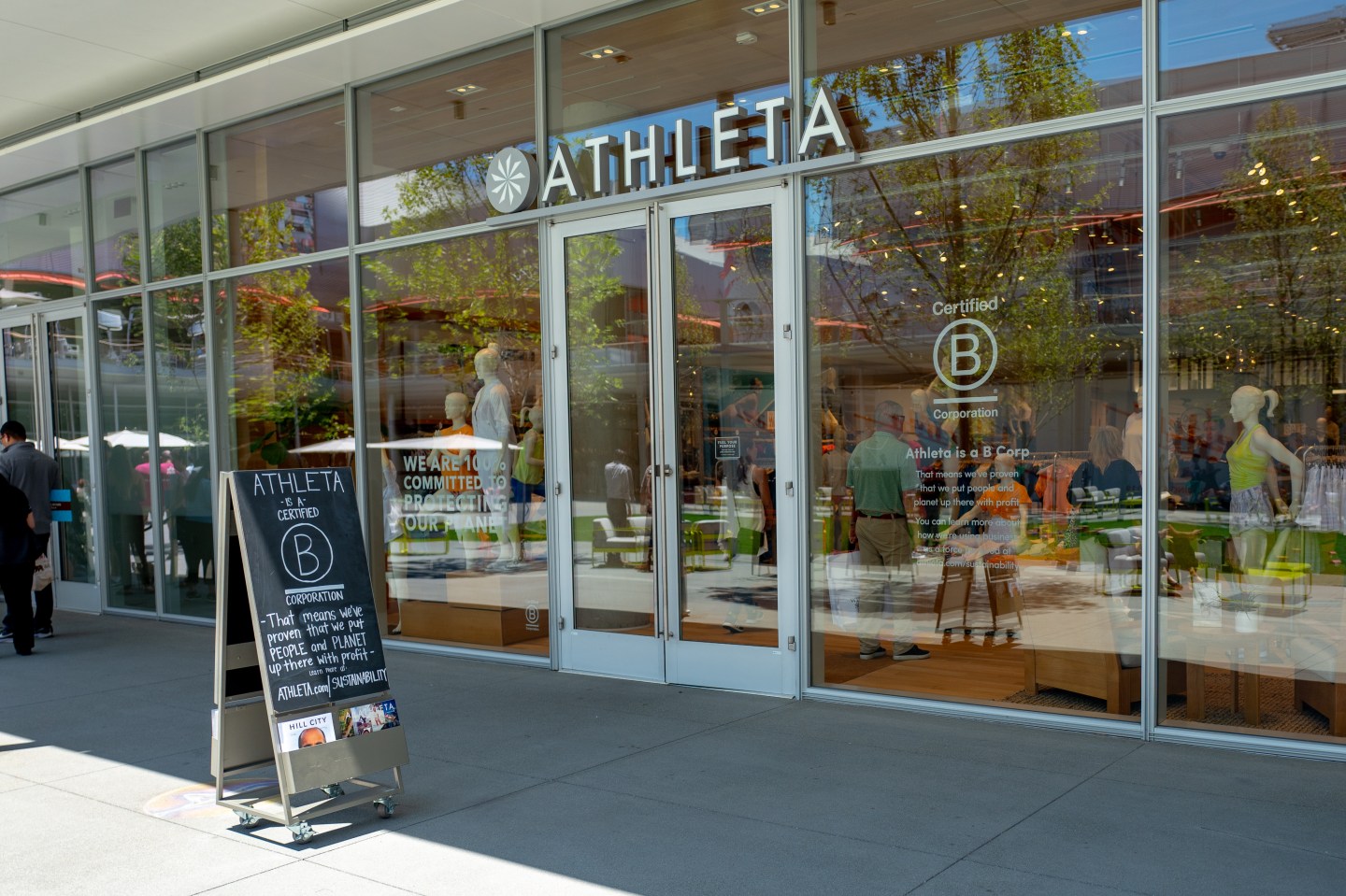 Gap Inc.’s fast-growing Athleta activewear brand is on a mission to double sales by 2023, and the road there for the billion-dollar brand goes through Canada.

Athleta, whose most direct competitor is Lululemon Athletica, is taking their athleisure fight to Canada with its first two international stores set to open this fall: one in suburban Toronto at the Yorkdale Shopping Centre, and the other just outside Lululemon’s hometown of Vancouver at the Park Royal Shopping Centre.

At Gap Inc.’s investor day in October, it was made abundantly clear that Athleta, whose sales crossed $1 billion last year, along with Old Navy, which is eight times its size, are at the center of the company’s growth plans even as the Gap and Banana Republic brands keep shrinking. Gap Inc. CEO Sonia Syngal said at the time that she wanted Old Navy and Athleta combined to make up about 70% of net sales by 2023 from 55% last year.

Syngal also told investors and analysts that a big part of that strategy would entail Athleta’s doubling its sales relatively quickly to $2 billion by selling its wares at other retailers in the U.S., opening more U.S. stores, and expanding internationally. And that’s where Canada comes in, not just as a new market but as a test for further global incursions.

Athleta CEO Mary Beth Laughton is keenly aware that Canada is Lululemon’s home turf, but she sees a lot of white space in the Great White North. “We’ve obviously taken a look at the market and just feel like there is an appetite for new brands,” Laughton tells Fortune. At the investor day, Laughton said international expansion was “a key element of our growth.”

That white space is similar to the niche Athleta has carved for itself stateside, by offering quality products at about 20% less than Lululemon. And Athleta thinks it stands out by also offering lifestyle products, like a blazer you’d wear on a Zoom call, in addition to yoga wear and other similar clothing for sweaty activities. Still, Athleta is going up against a formidable rival whose North American sales rose 21% last quarter.

Canada’s retail landscape is littered with American chains that underestimated how different Canadian shoppers are and how challenging the market can be. Target exited Canada in 2015 after a multibillion-dollar fiasco, and J. Crew bungled its entrée into Canada a decade ago by simply using the same prices as in the U.S. without adjusting them for currency exchange. (J. Crew exited Canada entirely last year.) Less dramatically, Saks Fifth Avenue halted its expansion into Canada, ultimately opening fewer stores than originally planned.

This is where being part of a large portfolio company that has been present in Canada for decades comes in handy. Athleta will able to tap the consumer data and insights of its sister brands and use their common e-commerce infrastructure that includes a distribution center in Brampton, Ontario, just west of Toronto.

“Hopefully we will have an easier time than some other competitors who had to start from scratch,” says Laughton, who became CEO of Athleta in 2019 after long stints at Sephora and Nike.

Another key pillar of Athleta’s growth in the U.S. will be selling through other retailers. It has begun to do so, selling its wares at five REI stores and on the outdoor retailer’s e-commerce site, with plans for more. In Canada, the focus will be solely on Athleta’s own stores and website, for now at least.

While Laughton wouldn’t say just how many stores the Canadian market could accommodate, two Athleta stores can only be a beginning, especially when you consider Lululemon has 62 stores north of the border. Laughton sees room for another 100 Athleta stores in the U.S., for a potential total of 300 locations within a few years. Allowing for the difference in population between countries, Athleta could theoretically support some 30 stores in Canada.

Laughton says the brand enjoys awareness among 20% or so of the Canadian population, compared with about 53% in the U.S. But of course Canadians also know their homegrown Lululemon and are very used to shopping there, hence a gradual approach is merited.

“We’re launching with the first two, but we are committed to growing the Canada business,” Laughton notes. “We’ll have a plan to expand our brand steadily throughout the country as it makes sense.”