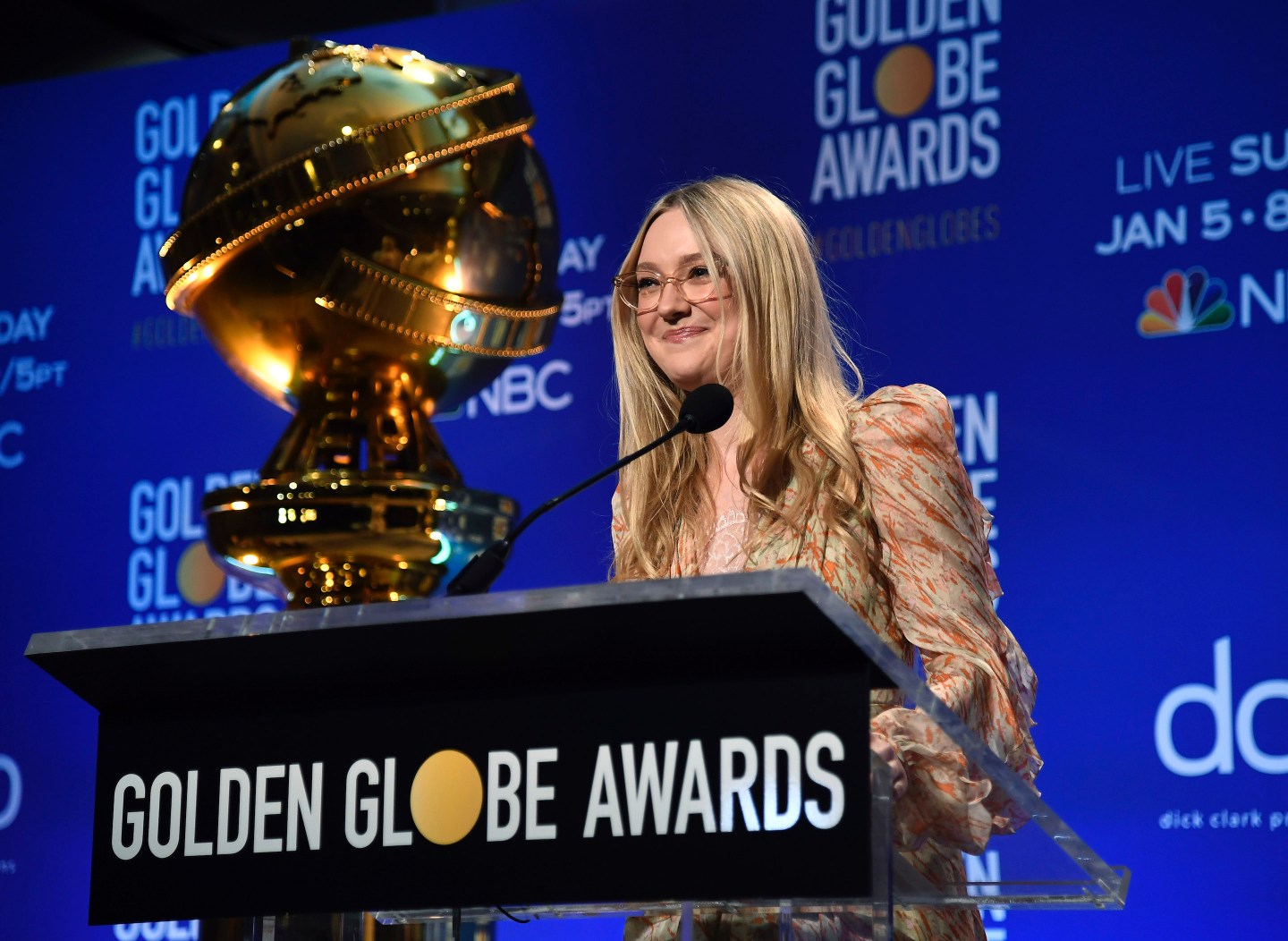 As is typical, the Hollywood Foreign Press Association offered up an exciting mix of surprises and snubs Monday morning when the organization announced its nominations for the 2020 Golden Globes ceremony, set to take place in Los Angeles on Sunday, Jan. 5. While showings by frontrunner films like Netflix’s Marriage Story and The Irishman, and Warner Brothers’ Joker were no-brainers, a slew of interesting trends, omissions, and surprise honorees across both movies and TV are worth a closer look.

Women directors and writers are totally absent from film nominations

Only one woman, Barbra Streisand, has ever won Best Director at the Globes (1983’s Yentl). And it appears there won’t be a second anytime soon: While a handful of female auteurs have shown promising traction this awards season for directing and writing—Greta Gerwig (Little Women), Lulu Wang (The Farewell), Lorene Scafaria (Hustlers), and Alma Har’el (for Honey Boy, from a script by Shia LeBeouf)—not one of their names appears in today’s Globe nominee roster. But the HFPA clearly liked onscreen talent from the first three films as Saoirse Ronan, Awkwafina, and Jennifer Lopez, respectively, all scored nominations for acting.

Ten-time nominee and two-time Globe winner Blanchett isn’t in the awards race this year for once—or so she thought! The HFPA nominated the Australian icon for Best Performance in a Musical/Comedy for one of the year’s biggest flops—Annapurna’s Where’d You Go, Bernadette? directed by Richard Linklater. The Globes are the Globes for this very reason: Never let terrible reviews and poor box office ever count an actor out for consideration (Hello, The Tourist.)

Netflix’s gripping sexual assault-themed Limited Series Unbelievable earned a very deserved four nominations, but other high-profile series and films about criminal justice were shut out. Ava DuVernay’s When They See Us for Netflix scored a slew of Emmys this year (including for lead actor), Critics’ Choice nominations, AFI “Program of the Year” distinction, and a Gotham Award, to name just a few accolades. But this harrowing series, about the unjust incarceration and ultimate emancipation of the so-called “Central Park Five” isn’t in the mix for a Best Limited Series Golden Globe. And interestingly, projects with similar themes also weren’t nominated, including the Warner Brothers’ films Just Mercy and Richard Jewell (though costar Kathy Bates earned a nomination) and Neon’s Clemency. Maybe they’re just too dark and depressing for such an ebullient celebration?

Fox News is the gift that keeps on giving

While Lionsgate’s buzzed-about feature Bombshell failed to earn a Best Motion Picture nomination, stars Charlize Theron and Margot Robbie are in the acting mix, while Showtime’s The Loudest Voice—also about Roger Ailes and Fox News—scored a lead-actor nomination for Russell Crowe (as Ailes) and Best Limited Series. This proves there’s still plenty of fodder to be found in conspiracy-laden cable-news. Also, Robbie, Nicole Kidman, Crowe and Naomi Watts are doing their darndest to make sure we know that, without Australians, we’d likely not have Fox News at all. (Thanks Rupert!)

Younger actors finally get their due

Roman Griffin Davis, now a Golden Globe nominee for his role in “Jojo Rabbit,” is seen during the opening ceremony of the 37th edition of the Torino Film Festival.
Nicolò Campo—LightRocket via Getty Images

For the first time ever, a handful of actors under 30 were acknowledged in the same year for their work in both TV and film. JoJo Rabbit’s breakout star Roman Griffin Davis (who is around 12) earned a Lead Actor in a Musical/Comedy nomination alongside veterans like Leonardo DiCaprio and Eddie Murphy; 26-year-old Beanie Feldstein was also acknowledged in that race for Lead Actress in Booksmart; Feldstein’s co-star Kaitlyn Dever, 22, was nominated separately for her dramatic work in Netflix’s Limited Series Unbelievable; Ramy Youssef, 28, earned a Lead Comedy Actor nomination for his breakout comedy on Hulu, Ramy; and another Hulu talent, The Act’s Joey King, 20, earned a nomination alongside Dever for Best Lead Actress in a Limited Series.

With the exception of A24’s The Farewell, which earned two nominations, smaller-budget artsy fare wasn’t part of the movie-nominee base. More specifically, the absence of A24’s other two key awards contenders, Uncut Gems (star Adam Sandler an egregious snub here) and The Lighthouse (costar Willem Dafoe another glaring omission), is pretty shocking, as is the snubbing of Amazon’s Honey Boy, for which writer and star LaBeouf was favored for Supporting Actor attention.

The HFPA loves a shiny new show (see: Jane the Virgin, Crazy Ex-Girlfriend, and The Marvelous Mrs. Maisel) and this year’s beneficiary is Apple TV+’s  star-studded The Morning Show, which earned three nominations, including for Best Drama and Best Actress (Jennifer Aniston, Reese Witherspoon). Elsewhere in the TV nominations, not a single broadcast drama or comedy was acknowledged, and many beloved outgoing series—HBO’s Veep and Game of Thrones, Netflix’s Orange is the New Black, CW’s Jane and Crazy-Ex—were all passed over in favor of buzzier properties such as Netflix’s newbie The Politician and HBO’s second season of Succession. Globes voters, however, wisely didn’t miss out on giving some last-chance love for Amazon’s Fleabag and HBO’s Big Little Lies: the outgoing, two-season shows each earned three nominations, including one for the Hot Priest!

Director Bong Joon-ho’s Korean-language sensation Parasite, which over the weekend earned even more kudos as the L.A. Film Critics pick for Best Picture, was notably missing from the Globes Best Picture roster. In fact, so were two other HFPA favorites, The Farewell and Pain and Glory. So what gives? Well, HFPA rules say that contenders for best drama or comedy/musical films must feature at least 50% of English dialogue. For this reason, The Farewell, Pain & Glory, and Parasite weren’t eligible as the films are in Mandarin (mostly), Spanish, and Korean, respectively. However, all three globally acclaimed contenders were locks for foreign film Globes nominations—attention that will only help propel them closer to Oscar.