Robert Eggers Talks ‘The Lighthouse,’ ‘The Northman,’ and… ‘Mary Poppins’? 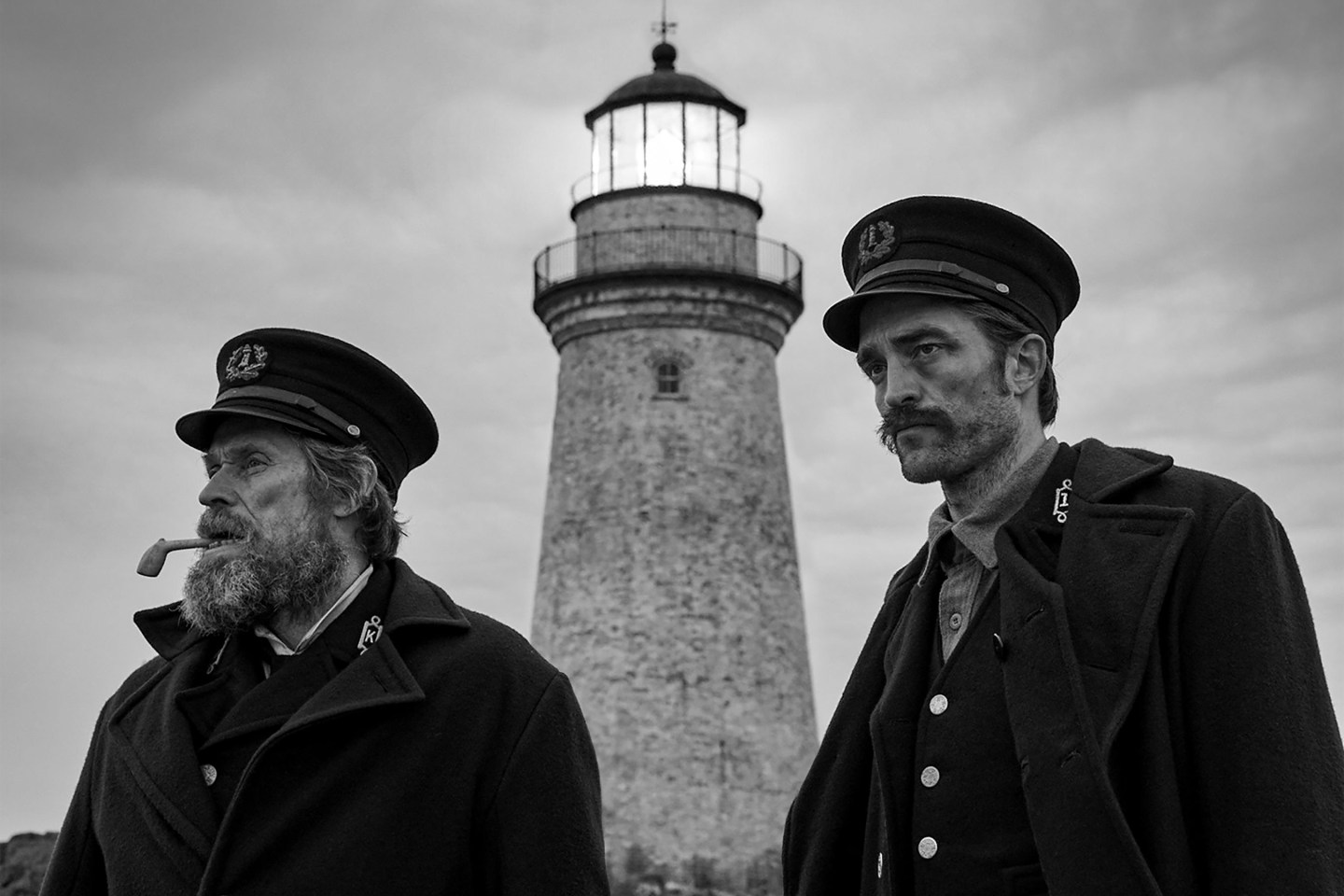 By the time Willem Dafoe’s barnacled sea dog of an 1890s lighthouse keeper confronts his fast-unraveling assistant (Robert Pattinson) with that memorably unsettling idiom, audiences watching The Lighthouse might have a dozen or so more pressing questions.

Robert Eggers’ uncanny, black-and-white nightmare—his much stranger follow-up to 2016’s acclaimed The Witch—is a movie that begs many and answers few. It’s an impressively freaky, vulgar, and frightening piece of work, inhabited by howling winds, ominous seagulls, shrieking mermaids, and—at the center of it all—that ever-tempting light, with powers so mysterious that it’s elevated to the level of nautical myth by film’s end.

Eggers, red-hot off the success of The Witch, chose for his next project to turn his attention north of Puritan New England, extensively researching what life would have been like for lighthouse keepers in the early 19th century. He was inspired in part by the real-life Smalls Lighthouse tragedy of 1801, in which one Welshman died and the other went mad after being stranded on their lighthouse station during an extended storm.

Filming in frigid Nova Scotia, Eggers and his small crew battled the elements, constructing their own lighthouse in which to chart the psychological collapse of two grizzled keepers, all in glorious black-and-white and a silent-movie-era 1:19:1 aspect ratio (the same as Fritz Lang’s M). Ahead of the film’s opening on Friday, Eggers chatted with Fortune in Boston to discuss The Lighthouse, his inspirations, and his newly revealed next project.

The Lighthouse is in theaters this week, but it premiered in May, at the Cannes Film Festival, and made the rounds on the festival circuit these past few months. What’s surprised or excited you about the response so far?

Well, I’m surprised it hasn’t been more divisive. I didn’t set out to make a divisive movie, that wasn’t my intention, but—as I mention discussing the same scenes over and over—it is juvenile, grotesque, way over the top, and there are some really ham-fisted moments. And on top of that, it’s trying to be incredibly obscure and opaque. [Laughs]

The budget might have been larger if it wasn’t black-and-white, and there were certainly conversations like, “Can you shoot this on an Alexa, or at least on colored film stock, so we can sell it to certain foreign markets that won’t take a black-and-white movie?”

I’m trying to imagine a colorized version of a movie that features much sweat, salt, and fecal matter as this one.

But I’d rather have that—a colorized version—and I said that. And they did ask if it had to be in that aspect ratio. But really, you talk a lot and wear them down. [Laughs] No, truly, once everyone got why these things were important, RT Features, Regency Enterprises, and A24 gave me incredible freedom and support.

And yet, you still get away with some impressively gross and vividly disturbing moments in The Lighthouse.

It’s hypnotic to watch you putting Willem Dafoe and Robert Pattinson so fully through the wringer in as many ways as you do. Were they always your first choices to play these characters, and what was one of your favorite scenes they share?

I don’t know who else could possibly have played these roles. Luckily, they were down for the challenge, so it came together very quickly.

Every scene is just the two of them, so there’s too many to choose from. But the scene where they’re doing their jigging and dancing was quite a lot of fun to shoot. We rehearsed that a lot, and Willem’s solo stuff is quite spectacular, so the energy shooting that was intense.

We didn’t have a lot of fun on set. It was a pretty miserable, tense shoot. But shooting that scene, the mood was very amped. And if you watch it with subtitles, you’ll see Rob is actually singing a lumberjack song, with lyrics, though it sounds in the film like he’s speaking in tongues. When you watch with subtitles, you can see that he’s actually saying words. That knocks everybody’s socks off.

A scene from “The Lighthouse.”
Courtesy of A24

The script for The Lighthosuse is dense with literary allusions, and the way you’ve written it—in terms of the period dialect, especially during the curse-filled monologues these characters deliver—it’s almost a foreign film in places. How did you develop that sea shanty-esque cadence to the dialogue?

I wrote this with [Max Eggers,] my brother. It’s set in nautical New England, so obviously you’re going to go to [Moby Dick author Herman] Melville first. And then, we jumped across the pond to check out [English poet Samuel Taylor] Coleridge, [Scottish novelist] Robert Louis Stevenson, and those other usual suspects. We read lightkeepers’ journals, interviews with lumberjacks, all sorts of stuff.

But the most helpful source was Sarah Orne Jewett, an author from the good old state of Maine. She was writing in our period, interviewing sea captains, sailors, and farmers, then writing her stories in dialect phonetically. That was a huge help. And my wife Ali came across a thesis by Eveleyn Starr Cutler, [titled “Representation of Maine Coast Dialect in the Work of Sarah Orne Jewett”]. She wrote down the dialect and provided rules for it so that we could double-check everything we wrote. That was beyond helpful.

When we get into the faux-Shakespearean, faux-Miltonian, Captain Ahab sea curses, that was stuff that, because of The Witch and other things I’ve written, I can just do. But the normal, everyday, old-timey dialects were much-researched.

Much has been written about the subtextual feminism of The Witch, and The Lighthouse is, opposingly, hyper-masculine in both its themes and characters.

Yes. The third New England, horror-adjacent folk tale I do will have to be not gendered. [laughs]

And I mean, that might be difficult. Sailors are archetypally male, witches and mermaids are both archetypally female—those associations are ancient. But in terms of whether you approached The Lighthouse with a specific interest in how gender plays a role in myth…

I wasn’t like, “I’m gonna write a feminist movie,” or, “I’m gonna write a movie about toxic masculinity.” I wanted a movie about witches, then a movie about lighthouse keepers that would be spooky and black-and-white. I dive into my research, try to close myself off to anything contemporary and seal myself in, like an anchorite to the past, to explore the world through the mindset of the period. But also, I don’t live in a vacuum. And thank god! Because if the only people who enjoyed The Witch were from the 1630s, and the only people who enjoyed The Lighthouse were from the 1890s, that’s a very small audience.

And a lot more cemetery screenings.

You grew up in New England—in Lee, New Hampshire, specifically. When did you first start keying into the folkloric, spookier elements of this region?

I mean, it’s always there. I lived in a clapboard house in the middle of a white pine forest, on a dirt road. My grandpa lived in a farmhouse, from 1740. You cannot escape it.

It really is in the bones of the buildings, which are often so historied. What’s interesting to me is that the lighthouse as a structure typically isn’t coded as dark or terrifying, in the way you use it in your film.

Yeah, it’s generally looked at more romantically in New England. But even in [20th century artist Andrew] Wyeth’s romantic, dilapidated—I won’t be an asshole and say “kitsch,” but I could—there’s still something mysterious about the lighthouse.

Mermaids, too, exist in our popular culture as more like Ariel in The Little Mermaid or Daryl Hannah in Splash!, not as dark or mysterious like they are in your film. How did you approach the idea of the mermaid, especially in terms of how she’s sexualized by Robert Pattinson’s character?

It just seemed to make sense. Sexuality in this movie is scary. But the mermaid is, classically speaking, the dark feminine. If you’re looking at what the mermaid is through the male lens, she’s part of the sea, that most powerful force, Mother Nature. She’s coming in to lure men, to grab them and pull them into the unconscious realm.

Both The Witch and The Lighthouse deal with that idea of characters gazing into the abyss and finding it stares back at them, in the form of these forces out to seduce or destroy them. Even as far back as growing up, did you watch anything that introduced that idea to you, of dark forces lying in wait in this other realm?

With her magic bag, taking kids on a ‘Jolly Holiday’?

Right. Indiana Jones and the Temple of Doom? [laughs] I don’t know, but that’s certainly myth—going into the woods, into the dragon’s lair, into the land of the dead…

You’re next directing The Northman, a Viking revenge saga set at the turn of the 10th century, with Dafoe as well as Alexander and Bill Skarsgard, Nicole Kidman, and Anya Taylor-Joy from The Witch. What can you tell me about it?

Folk tales, fairy tales, religion, the occult—these are the things I’m most passionate about, even more than cinema. And I’m very passionate about cinema. So it should be no surprise to anyone that, for the Viking movie, I’m trying to explore that stuff in the Viking world, to try to get inside the mind of old Norse people, portray what that was. I don’t want them to be, like, undercut-mohawk, tattooed, science-fiction rock stars. I want them to be old Norse people.

You moved up from a relative unknown in Anya Taylor-Joy leading The Witch to two widely respected stars, Willem Dafoe and Robert Pattinson, in The Lighthouse. The Northman already has a much bigger, more star-studded cast than anything you’ve worked on.

And there are still two more big roles that need to be cast! It takes a lot longer for actors’ deals to be finished when they’re famous. But look, you have to work with people you get along with. If you are establishing a relationship where you as the director have to be kissing your star’s feet, it’s not gonna work.

Willem Dafoe is a huge hero of mine. When I got the email that he wanted to meet me, I was shaking in my boots. But after talking with him for, like, 30 seconds, I was like, “Oh, we’re on the same page. I can get along with this guy. And also that means we can work together.”

It’s the same thing with Rob and the people cast in The Northman, whom I’ve met but haven’t worked with yet. From speaking, I can tell. It’s not a movie-star thing. These are creative, smart, passionate craftspeople who want to collaborate and tell a story.

—Will Zombieland: Double Tap be a Halloween hit?
—And the 2020 Oscar for Best Picture will go to…
—Why Parasite became the film everyone’s talking about
—The best movies that came out of the 2019 New York Film Festival
—Kevin Smith isn’t done being ridiculous just yet
Follow Fortune on Flipboard to stay up-to-date on the latest news and analysis.