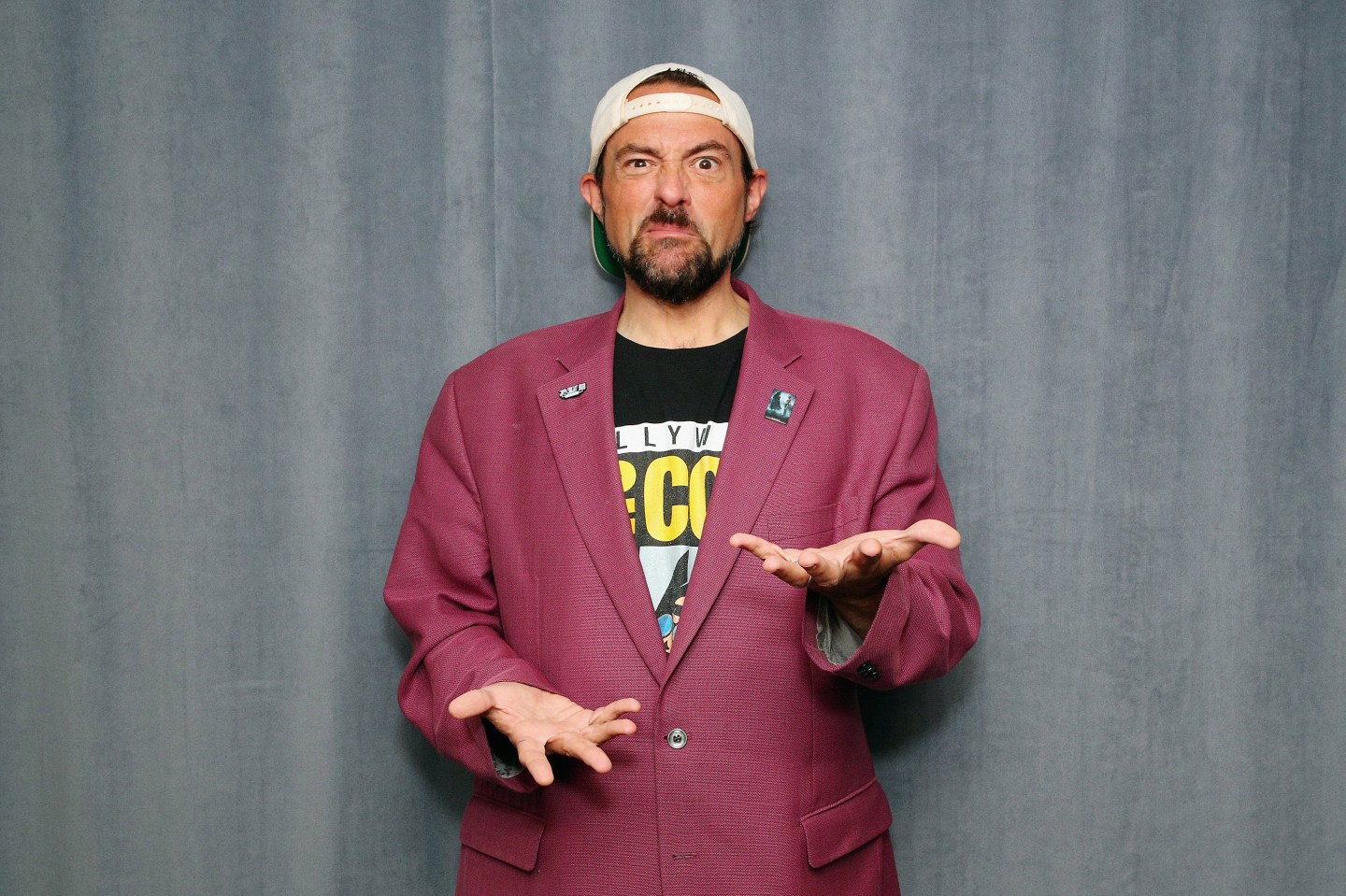 Kevin Smith never seems to change. Or does he?

On a recent morning in Century City, Calif., the writer, director, and Comic-Con ambassador is dressed in his signature backward white ball-cap, an oversize purple blazer, and baggy denim shorts. On his black T-shirt are his characters Jay and Silent Bob, whom we first met in his genre-busting 1994 debut film Clerks, in a passionate, pot-laced embrace.

But at least one thing’s a little different about Smith: There’s a lot less of him since the 49-year-old lost more than 50 pounds following a heart attack in February 2018 that almost killed him.

He says the event led to cleaner living, his becoming a WW (formerly Weight Watchers) ambassador, and maybe the most meaningful chapter yet in a slow, somewhat reluctant transition into adulthood. “People tell me the quality of my flicks went to shit when I got married and had a kid,” he posted on Twitter in July. “If so, it was a fair trade. Whatever ailed me as a piss-&-vinegar 20-something was gone, replaced by joy and contentment. Great art comes from pain—so maybe happy people don’t make great art.”

That doesn’t mean Smith has stopped making weird stuff for his base. Far from it, actually, as he prepares to unveil the latest entry in a very unlikely franchise: Jay and Silent Bob Reboot, which has its titular heroes (played again by Jason Mewes and Smith) on a cross-country mission to stop Hollywood from, you guessed it, filming a reboot based on them.

Smith talked with Fortune about why fatherhood inspired the movie, opening Tuesday; how he wrangled A-list buddies like Ben Affleck and Chris Hemsworth to do the movie; which of his films he’d actually consider rebooting; and why he’s more than totally okay with Clerks being his legacy.

Smith as Silent Bob and Jason Mewes as Jay in “Jay and Silent Bob Reboot.”
Courtesy of Kyle Kaplan

This movie is totally and utterly ridiculous. I assume that was your intention?

Absolutely! It makes fun of sequels, remakes, and reboots while being all three at the same time.  But it’s not an issue movie like, “We have to stop what Hollywood’s doing!” It’s more of a Mad Magazine or National Lampoon parody. Also it seemed like such a low-hanging fruit to me. I’m like, “Wait, nobody’s done a reboot satire yet?” Then the conversation got louder, which set us up to not have to explain it to the audience. And thankfully, nobody in our audience is looking for a coherent movie anyway. [Laughs]

I think the best way to describe it is “woke stoner movie.” It’s an inclusive, self-aware homage to Cheech and Chong, though there weren’t gay, Muslim, or deaf characters in Up in Smoke that I can recall.

Exactly. We have our cake and eat it too because we can comment on being woke, while literally being it. Though I must remind folks that this stuff isn’t totally new for me. Chasing Amy was about a gay woman. And I’ve been trying to tell a story that included a deaf character since a script I wrote in the mid-90s called Bussing. So this movie is pretty made up of parts of other projects that didn’t work!

Your 20-year-old daughter Harley Quinn plays the character of Milly in Reboot, who we learn is Jay’s daughter. Did you see her character as the prevailing influence who finally drags Jay and Silent Bob into the modern era?

Yeah, and combining that with comedy was difficult at times. The first cut of the movie had Jay having these Archie Bunker-ish moments like, “Where did this Muslim come from?” And some people were like, “That sounds harsh.” And I’m like, “Well, the character is literally Muslim.” And they said, “It sounds harsh coming from a white guy.” So we say, “All right. That’s easy enough to lose.”

From left: Mewes, Harley Quinn Smith as Milly, and Smith in “Jay and Silent Bob Reboot.”
Courtesy of Kyle Kaplan

To what degree does Jay’s connection with his daughter reflect your own experiences?

Honestly, without Harley and my wife, Jennifer, who would I be at this point? They’ve helped to define my life and give it purpose. Jason and I wouldn’t have this particular take on Reboot were it not for our kids. I mean, the notion of Jason having a kid in real life at first was ridiculous.

And she’s in the movie as well.

Yes, she’s 4 now and plays Ben [Affleck] and Joey’s [Lauren Adams] daughter. Watching Jason as a dad in real life… he is a legit wonderful parent. Like, the best dad I’ve ever seen, and that includes me and my own dad! He never knew his father, and his mom was pretty terrible, so we’d assumed he’d be a terrible parent too. But it’s been the total opposite. So after a couple years of watching him be superdad I was like, “Okay, that’s the hook for the movie.”

Speaking of Ben and Joey, how did you manage all the dozens of cameo appearances in the movie? From Fred Armisen to Chris Hemsworth to Val Kilmer—did everyone actually travel to New Orleans, where you filmed?

That was the work of our amazing producers Jordan Monsanto, who is Jason’s wife, and Liz Destro. With the exception of Hemsworth, who we shot in L.A. because he was doing Avengers press, and Matt Damon, who we shot in a church here, everyone else went to New Orleans. Ben [Affleck] actually got on a plane and came down. It was pretty stunning.

You’ve made some loyal friends over the years.

“It’d really help me heal and feel better if you did this movie.”

[Laughs] Yes, and I had to go even harder than that. “Remember that time I almost fucking died last year?” They’re “All right, all right, I’m coming.”

A painting of Smith and Stan Lee by Rob Prior on display at “Excelsior! A Celebration of the Amazing, Fantastic, Incredible and Uncanny Life of Stan Lee” in January in Hollywood.
Albert L. Ortega—Getty Images

There is some wonderful footage of you with your late friend and mentor Stan Lee from Comic-Con 2017 at the end of the movie. What does it mean to you that he’s included?

Sadly, he was meant to be the star of the third act. When he passed away, we were like, “Who’s the next Stan?” And there is no next Stan. At first I was on the fence about including that Comic-Con footage, but there he is laughing and having a good time. And he’s legit laughing. He was always smiling. I was lucky to call him my friend.

Looking back on your career, if you could reshoot any of your movies with a bigger budget, which would it be?

I actually considered redoing Clerks. It’s funny. I was on a podcast once with [director] Jason Reitman, who said Clerks was the movie that made him want to be a filmmaker. And I’m like, “It wasn’t Ghostbusters?” [Laughs] But Jason said, “Don’t ever fuck with Clerks. It’s perfect.” I think I’d choose Chasing Amy, but I wouldn’t direct it myself. I’d exec-produce and let somebody else touch it. That was the movie that buoyed my reputation even when shit was bad. People would be like, “Well, he did do Chasing Amy. Leave him alone!” But younger audiences today think the movie is problematic, that a straight dude made it. And they’re not wrong. Also, I’m 49 now and have been married to the same person for 20 years. What do I know about love? If I’m going to do a love story now, it’s got to be about the hopelessness of being married to somebody for fucking 20 years. That’s the story I can tell! So Chasing Amy would need to be redone by someone else.

And probably told from Amy’s point of view this time.

Yes, it has to be. And that’s the biggest complaint I get about the movie. “She’s the hero, so why do we give a fuck about his hurt feelings?”

Depictions of sexual fluidity are much more varied now than they were in 1997. So in a lot of ways, the story is even more resonant today.

Yes, it’s a perfect story for right now. Here we are 22 years later still talking about Chasing Amy, which is neat! But I’m going to blame myself for that because I’m really the only one who keeps talking about my movies. [Laughs] Not a day goes by where I don’t say the word Clerks. Shy of my child and my wife, it’s still the biggest thing that ever happened to me. I’ve done countless other fucking things in 25 years. But if I had to pick a fucking epitaph for my gravestone it would be, “He made Clerks. And he told us about it every day of his life!”

Smith on the set of “Clerks“ with cinematographer David Klein in 1994.
Everett Collection

It’s only gotten more difficult in the past 20 years to finance independent films. What was your budget for this movie and how did you raise the money?

The budget was $10 million. It was a miracle to get the money. And the only reason we got it was because we eliminated some of the risk because of our built-in audience. We have a following who will come see me and Jason talking at live events about the old movies we made and pay 50 bucks to 100 bucks! I told our investors, “If we bring them a brand-new movie, they will be happy because they’re actually seeing something fucking new for once.” So it was about combining blast-from-the-past stuff with a new experience. [Domestic distributor] Saban Films will have the movie in perpetuity, so we don’t have to reimburse them. And Universal will keep the money from overseas. So it’s really just a few equity financiers we need to reimburse. And the tour that we’re doing will pay them back, probably by early next year.

So the live shows you do, like the upcoming Jay and Silent Bob Reboot Roadshow events, function as a seemingly endless marketing engine for you and your movies?

Exactly. So rather than spend $20 million on advertising, we’re just going from city to city talking about it. Jason and I live on the road anyway. So this movie is what we’ll be talking about for the next year. And knowing me, the next 20. [Laughs]

—Recap: Succession season two episode 10
—Mr. Robot creator Sam Esmail on the show’s fourth and final season
—Nick Kroll on the “meta” experience of making Big Mouth
—How Comedy Central grew up to hold its own against Netflix
—Reese Witherspoon’s book club is keeping production company Hello Sunshine on top
Follow Fortune on Flipboard to stay up-to-date on the latest news and analysis.