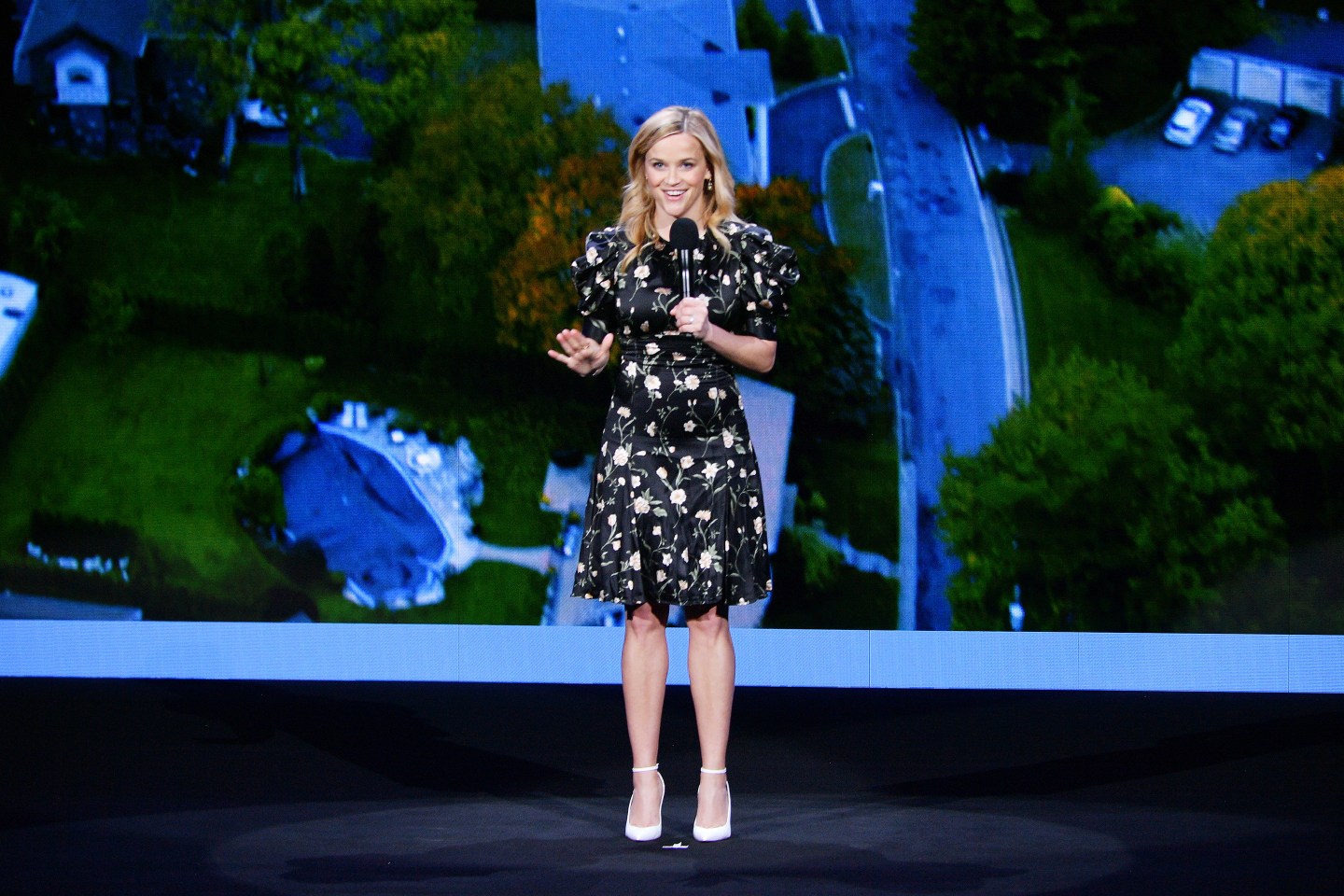 Reese Witherspoon doesn’t sleep. At least that’s the consensus of her Hello Sunshine team. Since 2016, Witherspoon has been the face and founder of Hello Sunshine, an integrated media and production company focused on women, and she hasn’t taken a break since.

Through prestige dramas and high-profile ensembles (Big Little Lies, The Morning Show), Hello Sunshine has been highlighting “female authorship and agency” within all parts of storytelling around the clock. The foundation of this rapidly growing company is a community nearly a million and a half strong: Reese’s Book Club.

“She doesn’t sleep a lot, judging by the time stamps,” jokes Charlotte Koh, Hello Sunshine’s head of digital media and unscripted. Witherspoon’s Santa Monica office is filled with career memories: hiking boots from Wild, a print of Johnny and June Carter Cash, photos of herself with costars, and neat stacks of books. It makes sense that the woman known for portraying Tracy Flick and Elle Woods uses every last minute of her day.

Witherspoon is across town filming the upcoming Hulu miniseries adaptation of Celeste Ng’s Little Fires Everywhere (September 2017’s book club pick). Lauren Neustadter, Hello Sunshine’s head of film and TV, witnesses daily the actress’s commitment to reading: “If they’re changing the lighting or they’re moving the camera, you have 20 minutes. [She’ll] be like, ‘Okay, I need to knock out this manuscript. I’ve got this script. I have a book to read.’ ” Neustadter estimates that Witherspoon can take a book down in as little as 48 hours—necessary for keeping up with her community.

The book club was not something that the company started for Witherspoon; she was already doing it on her own.

“I started posting on Instagram in 2013,” the actress tells Fortune via email. “I wanted to share a little bit of my life with my fans, so I started posting the books that I was reading starting with Wild: From Lost to Found on the Pacific Crest Trail, which we were making the movie of at the time in addition to Gone Girl. The response was so welcoming that I decided to expand the book club to have an even greater reach in this modern age.”

Reese’s Book Club has become an essential space for stories featuring diverse women as protagonists and authors. “She has very selective taste, in terms of the fiction and nonfiction that she responds to,” Koh says. “She’s also a huge champion of women’s voices, stories told from the female perspective, and stories that will move and change the way people think about female identity…The response was so enthusiastic that [the book club] then deserved its own Instagram handle. The Hello Sunshine mission…became merged with the book club mission.”

“Everything we do reflects the perspective of our consumers—that their time is precious and [that they are] busy women,” says Harden. “We relate to that [limited amount of time] as moms and working women, so the value of a trusted voice like Reese being able to say, ‘Hey, here’s something I think is worth spending your time with’ is [vital].”

Harden leans back, thinking about the past two marathon years of getting Hello Sunshine up and running: “We’ve been trying to build the company very intentionally, and [making the book club a tentpole] was the first intention. Books are at the center of everything we do, [including our] film and television productions.”

Now the book club is a well-oiled machine, thanks to Witherspoon’s vast personal network. “At first, I was worried there wouldn’t be enough books to choose,” Witherspoon recalls. “But as soon as we launched the Reese’s Book Club handle on Instagram, a community started to grow of recommendations and sharing the names of incredible authors.”

Koh concurs: “Reese organically asks people for recommendations across her life—it’s literally her friends, her acquaintances, her colleagues, the people who work here, and yes, of course there’s some sort of organization to make it happen, but in the end, the inspiration that moves her could come from anybody. I think that’s really important.”

Witherspoon is the head of the club. However, Koh and Gretchen Schreiber (whose official title at Hello Sunshine is “Bookworm”) make sure that the growing section is being taken care of on a daily basis in addition to helping make the monthly selections. “We have typical things that we do [to look for picks], whether it’s getting recommendations from Reese, looking at the market itself, talking with our book scout, or trying to find the books that we love,” Schreiber explains.

Hooking a reader fast is crucial for Reese’s Book Club, which is primarily made up of millennial women. “Having something that’s really readable, that you want to keep reading, is really important,” Schreiber says. The Hello Sunshine team looks for picks that will satisfy the developing group as well as Witherspoon’s tastes. “We know there’s a responsibility to the community, and Reese knows it. We wait for the signal,” says Koh. “It’s a little bit like a beauty pageant, where you have 10 semifinalists, but it’s really up to her to crown Miss America!”

The high engagement that Reese’s Book Club generates isn’t contained to likes—it drives real change within the Hello Sunshine ecosystem, which excites Witherspoon: “We really study the responses from our community and try to make picks that will both satisfy them but also encourage them to find new voices in fiction. We also like to add surprises with nonfiction picks, interviews with authors, visits to book fairs and local booksellers.”

Witherspoon works closely with Harden and Neustadter to see which book club picks will translate well to the screen and vice versa. Currently Hello Sunshine has 21 film and television adaptations of books in the works, with nearly a dozen from the book club’s arsenal (including Daisy Jones & The Six, Where the Crawdads Sing, and From Scratch). “It all starts with an incredible story. Then it’s just [figuring out] how do we tell it and what is the [best way to present it],” says Neustadter, who’s been collaborating with Witherspoon since they first met “dangerously close to a decade ago” on a film set. “[Sometimes] we’ll read something, and we’ll send it over to [the] book club and say, ‘We want you guys to read this because we loved the read, but it wasn’t exactly right [for adaptation].’ ”

However, when a book checks all the boxes, the results bring these narratives to life for new audiences. “If you think about the books that Reese has adapted, Big Little Lies, [Top of the Morning into] The Morning Show, and then Little Fires Everywhere, these are shows that are meant to start big conversations,” Neustadter says.

Igniting these exchanges is what keeps motivating Witherspoon: “It’s kind of incredible to think that people all over the world will be reading one author’s book, sharing their love of the characters, and exchanging ideas,” she says.

Wondering whether your comments are being taken seriously? Know that Hello Sunshine is listening. “We knew that we were [working on] an adaptation of From Scratch before it was a book club pick,” Neustadter says. “We watched the book club conversations so carefully [because] they will inform conversations in a writer’s room…‘What [was the book club] most excited about? What were they less sure about? What were the questions that they were asking that we can answer in adaptation?’ There are huge opportunities there.”

One of the most important new voices that Harden, Witherspoon, and company are hoping people discover—and fall in love with—is Hello Sunshine itself. The media brand has hit big with its film and TV production arm, but through Reese’s Book Club, Hello Sunshine is ready to be more. “We, as Hello Sunshine, are part of your digital daily consumption,” explains Koh. “We’re something that you actually look forward to, hopefully, every day on social…whether it’s film, television, the book club, social media, the YouTube channel, [or] the newsletter.”

Witherspoon has her eyes on the future of her book club, which earlier this year announced a partnership with Audible to showcase the club’s audiobooks, as well as original narratives. “We have a really great plan for the future that will start with bringing our book club together in real time,” she says. “Our CEO, Sarah Harden, and I are always brainstorming about the next steps for our book club. We definitely contemplate whether we want to have a retail presence or be able to let devoted members of the club have early access to advance reader copies.”

Harden confirms that Reese’s Book Club will start moving from URL to IRL connections. “The focus for next year is really deepening what it means to be a member of Reese’s Book Club,” she says. “When you start a company, and you build a following, doing it on Instagram, Facebook, and Twitter totally makes sense, but those platforms all have their pros and cons in terms of conversation and real interaction…We’re going to convene our members in real life more frequently.”

Whether these new real-life moments will include Witherspoon is unknown, but her team knows that she’ll be ready at a moment’s notice for the book club. And though she did elaborate on her uncanny ability to read full novels on top of her already packed schedule—“I read nonfiction in the morning, and I read 30 minutes to an hour every night before I go to bed”—she never confirmed that she sleeps.

Sleep or no sleep, Witherspoon has been overwhelmed by the response of her sharing her life through literature: “It’s amazing to see the traditional book club that my mother and grandmother both had as a tradition in their lives, evolve and become something much more global and modern.”

—As RuPaul’s Drag Race expands to the U.K., DragCon shines light on its mainstream success
—Apple TV+ ads ruled the Emmys—here’s what that means for the service’s strategy
—Why this year’s Emmys felt different
—Recap: Succession season two episode seven
—Meet the women leading Netflix into the streaming wars
Follow Fortune on Flipboard to stay up-to-date on the latest news and analysis.