As ‘RuPaul’s Drag Race’ Expands to the U.K., DragCon Shines Light on Its Mainstream Success 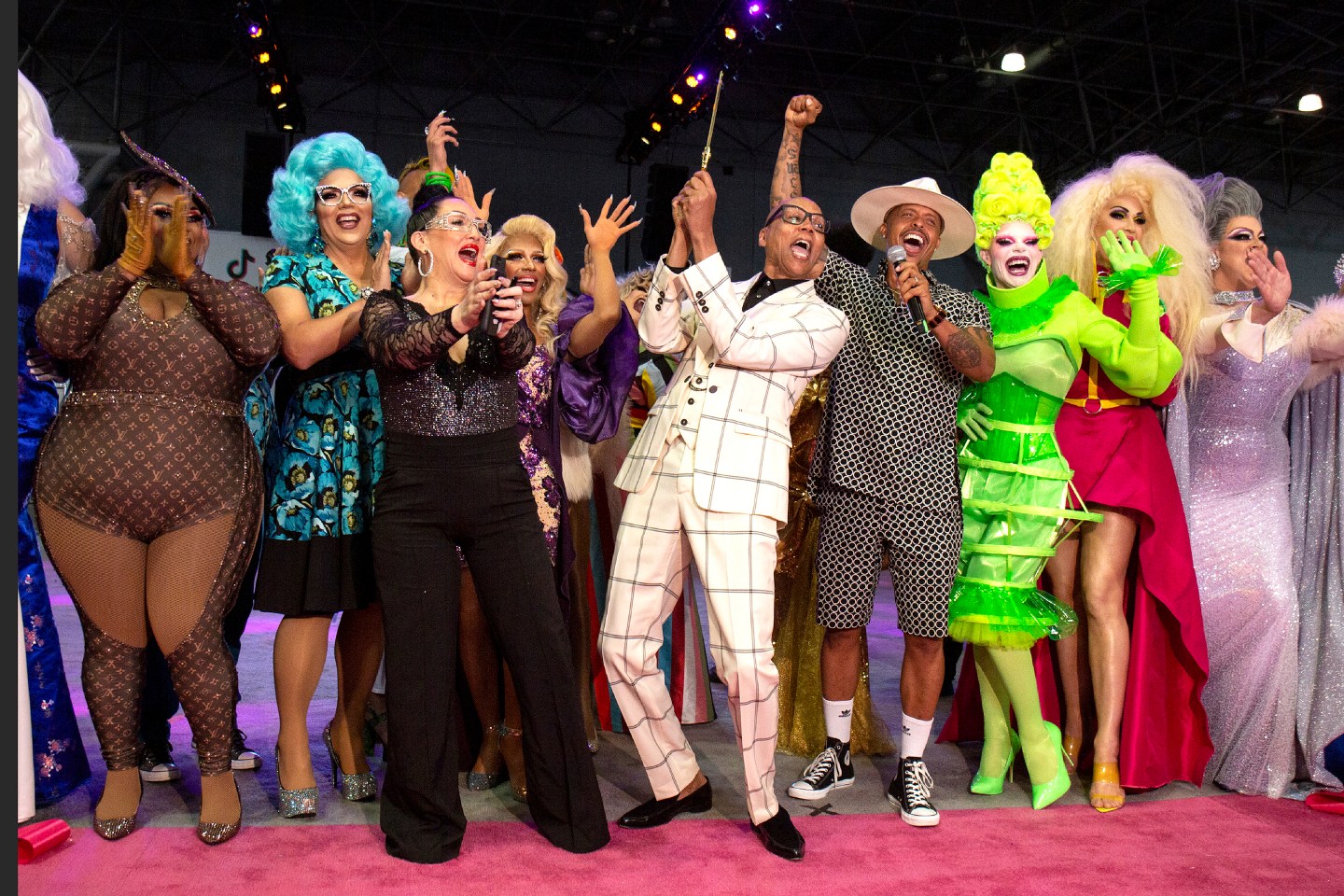 Two giant babies dance down a pink carpet past a three-breasted man and drag queens covered in rhinestones. On stage, five children, some of their faces splashed with glitter, jump to the sounds of a DJ while, backstage, two men in full clown faces prepare for a live makeup tutorial.

This is New York City DragCon. And the DJ is RuPaul.

“We were in Atlanta, and we saw this extraordinary figure wheatpasting posters of himself that said ‘RuPaul is everything,’” says Fenton Bailey of the moment he and his partner, Randy Barbato, first met the drag queen—now easily the world’s most famous—back in the 1980s.

“He was wearing thigh-high wader boots, football shoulder pads, and a big, ratty wig. And in that instant, we recognized the superstar you know today. You get very few lightning bolts of clarity in your life, but this was one of them.”

Bailey and Barbato are the founders of World of Wonder, the production company behind RuPaul’s Drag Race, which has finished its 11th season in the U.S., and RuPaul’s DragCon, which has taken place since 2015 in Los Angeles and started two years later in New York. Now the company is promoting the debut of RuPaul’s Drag Race U.K., set to air on BBC Three across the ocean on Oct. 3, and on WOW Presents Plus in the U.S.

Of course, Drag Race U.K. needs its own Con—now scheduled for Jan. 18 and 19 in London. And don’t forget RuPaul’s Drag Race Live! Las Vegas, taking up residency at the strip’s famous Flamingo hotel and casino starting in January 2020.

Since even before Bailey and Barbato “discovered” Ru, he’d been destined to create a sort of drag empire. “Ru approached us first,” Barbato tells Fortune. “Ru has always been very clear-minded and direct about how to move forward.”

Drag queens and enthusiasts echo this sentiment about RuPaul’s star power all throughout New York City DragCon, held at the Javits Center from Sept. 6 through 8. Of course, RuPaul is the queen of DragCon, so naturally his subjects bow down. But he’s also launched the careers of basically every queen who’s appeared on his shows, thrusting drag deep into the mainstream.

What happens, though, when a bright, beautiful, difference-embracing subculture is pushed then pulled into the wider public’s spotlight? Does it spread the joy, or dilute the culture? As RuPaul told Judge Judy in Interview magazine last month, “I don’t think drag itself has become mainstream. The superficial part of it has, but the deeper message, which is that we are all extensions of the power that created the universe, is the part that’s not there yet.”

The panels at DragCon grapple with what the increased mainstreaming of drag means. (RuPaul did not respond to Fortune’s repeated requests for comment.)

In one called “Drag Stories: The Journey of Drag in Show Business,” 1980s party queen Dianne Brill (whom Andy Warhol photographed and Jean Paul Gaultier dressed) says that the abundance of YouTube tutorials on how to do drag makeup “loses the authenticity of what drag is supposed to be.” The videos teach you how to do drag “perfectly,” she adds, and drag is not supposed to be perfect.

In a way, drag has long enjoyed “mainstream” success. Dressing as a woman, Julian Eltinge accrued enough theatrical and film fame in the early 1900s to build an epic mansion in Los Angeles. As the city’s public library writes, “In the first half of the twentieth century, Eltinge’s notoriety as a ‘female impersonator’ rivaled that of superstar performer RuPaul’s status today.” Drag inspired Madonna in the ’80s, and drag kings like Mo B. Dick made a killing performing in the East Village in the ’90s.

Audiences watching drag shows have, however, shifted with time. “Now it’s a lot of heterosexual women and children,” says season 11 Drag Race contestant Nina West on the “Comedy Queens” panel. The others on the panel, including Meatball and Hedda Lettuce (she wears a bright green wig), note that they’ve had to reevaluate jokes about oral sex traditionally meant for gay male audiences.

As for the kids watching? “If they don’t like it, they can leave. It’s not Barney,” says Hedda. A little blond boy claps.

Back on the convention floor, Ru has started playing Spice Girls remixes from an elevated DJ booth. Below, a handful of women and small children sashay across the stage. Behind a row of booths where attendees can pay to get their pictures taken with various famous queens, a bejeweled performer named Paradise reads to kids sitting by a giant, blow-up squirrel—an homage to the drag queen nickname “squirrel friends.” (Like squirrels, drag queens hide their nuts.)

Across the convention floor, a booth dedicated to Elizabeth Warren (the only presidential candidate with a DragCon presence—she provided a brief video speech screened from the main stage) stands beside a vendor space purchased by Tammie Brown. Back in Drag Race season one, RuPaul told Brown to “sashay away” at the end of episode two. Brown was left with mixed feelings about the show.

“Drag is becoming more…normal,” she tells me, her signature lipstick, peaking toward the sides of her mouth, making her appear anything but. “And boring, too, in a way. Everybody’s kind of looking the same now.” Drag Race, she says, is contributing to that. The growing influence of reality TV in drag culture is shaping it in other ways too. Throwing shade may look entertaining on reality television, but Brown doesn’t like that “these little attitudes” have seeped into the real world.

A subculture lives on

If there’s any concern that drag culture has become “normal” and “perfect,” Bushwig immediately squashes it. A performance/party with a warehouse vibe right at the border of Queens and the Bushwick neighborhood of Brooklyn, Bushwig usually takes place on a different weekend from NYC DragCon, but this year the two overlap. The crowd here looks grittier, more real than convention-center chic (though many from DragCon, which ended at 6 p.m. on Saturday, have made their way over to Bushwig by nightfall).

In one of Bushwig’s back-to-back performances, Nina West, from DragCon’s comedy panel, takes the stage to perform a lip-synched Disney medley, morphing from Mulan to Belle. At the end of her show, she yells to the crowd, “This is where the movement is right now, in Brooklyn!”

Outside the Bushwig venue, Grace Shush, a bearded U.K.-based queen who didn’t make the cut for the newest Drag Race franchise, tells me the show is already making a mark on her stomping ground. While she recently performed in Manchester, the “Drag Race girls” showed up. “It just felt like [the audience] was going to go see them, not us,” she says.

“And that’s not a bad thing,” she quickly adds. “Having a platform is incredible, and I think Drag Race has done so much for the community…I do think what we need more of on Drag Race is AFAB queens [assigned female at birth] and bearded queens, because they’re still queens. All drag is relevant.”

Expanding that platform to the U.K. still means letting different types of humor and style take the drag stage. Back at DragCon on Sunday, all the U.K. queens enter the pressroom in pairs, eager to discuss how their humor is darker, more sarcastic, and dirtier than in the U.S. show. They also talk earnestly about what it could do for drag culture in the U.K. “Maybe it will open up more conversation about where drag in the U.K. started,” says Vinegar Strokes, in a ruffled baby-doll dress.

“I think there’s a whole demographic of people who have never been exposed to the show,” adds contestant Crystal. The general consensus seems to be that the show will get drag queens working in the U.K. more gigs, and will also offer something different to viewers.

“I don’t think it’s going to be a cookie cutter of the U.S. at all,” says Sum Ting Wong.

Exemplifying “not cookie cutter,” Blu Hydrangea from Belfast (the only Irish contestant on the show) approaches with three, big-lashed eyeballs atop her head and furry monster boots. She has a political agenda. Gay marriage isn’t legal in Northern Ireland, and Blu Hydrangea thinks being on the show could help provide the issue some visibility.

“With this platform, I can make Belfast the gayest city in the world,” she says. “I want to be the first person married in Belfast as a gay man.” Blu’s partner has been with her all day, “setting up my shoes and making sure I don’t look like a tit.”

Many of the U.K. contestants seem to share the sentiment that U.K. drag queens take themselves less seriously than drag performers do in the U.S. Perhaps Drag Race’s pageant-perfect influence hasn’t yet penetrated the U.K., or maybe it’s just a cultural difference. But RuPaul is still a big deal overseas.

“Massive,” says contestant Divina De Campo, whose previous showbiz experience extends to The Voice UK. “In the ’90s, she was enormous…with [hit single] ‘Supermodel,’ and all that stuff. She’s definitely a part of the public consciousness.”

That now means Drag Race is part of the public consciousness too. “There’s so many queens coming up who are like 16, 17, and the only reason they want to do drag is to try and go on Drag Race,” says The Vivienne. “I think that’s really unhealthy. Drag to me is having fun and entertainment.”

Though the U.K. drag queens enjoyed pointing out how the show will be different from the U.S. original, for producer Barbato, “The most exciting thing is what they have in common,” he says. That’s also what convinces him Drag Race U.K. will be a hit.

“The success of RuPaul’s Drag Race is not just the artistry or innovativeness of the drag queens. It’s the heart of them, and that’s how people connect with them—that’s the same thing that’s happening in [the U.K.] series,” he says. “We felt it after the taping of the first episode. It was like, Oh, my god, I’ve already fallen in love with them.”