Apple TV+ Ads Ruled the Emmys. Here’s What That Means for the Service’s Strategy 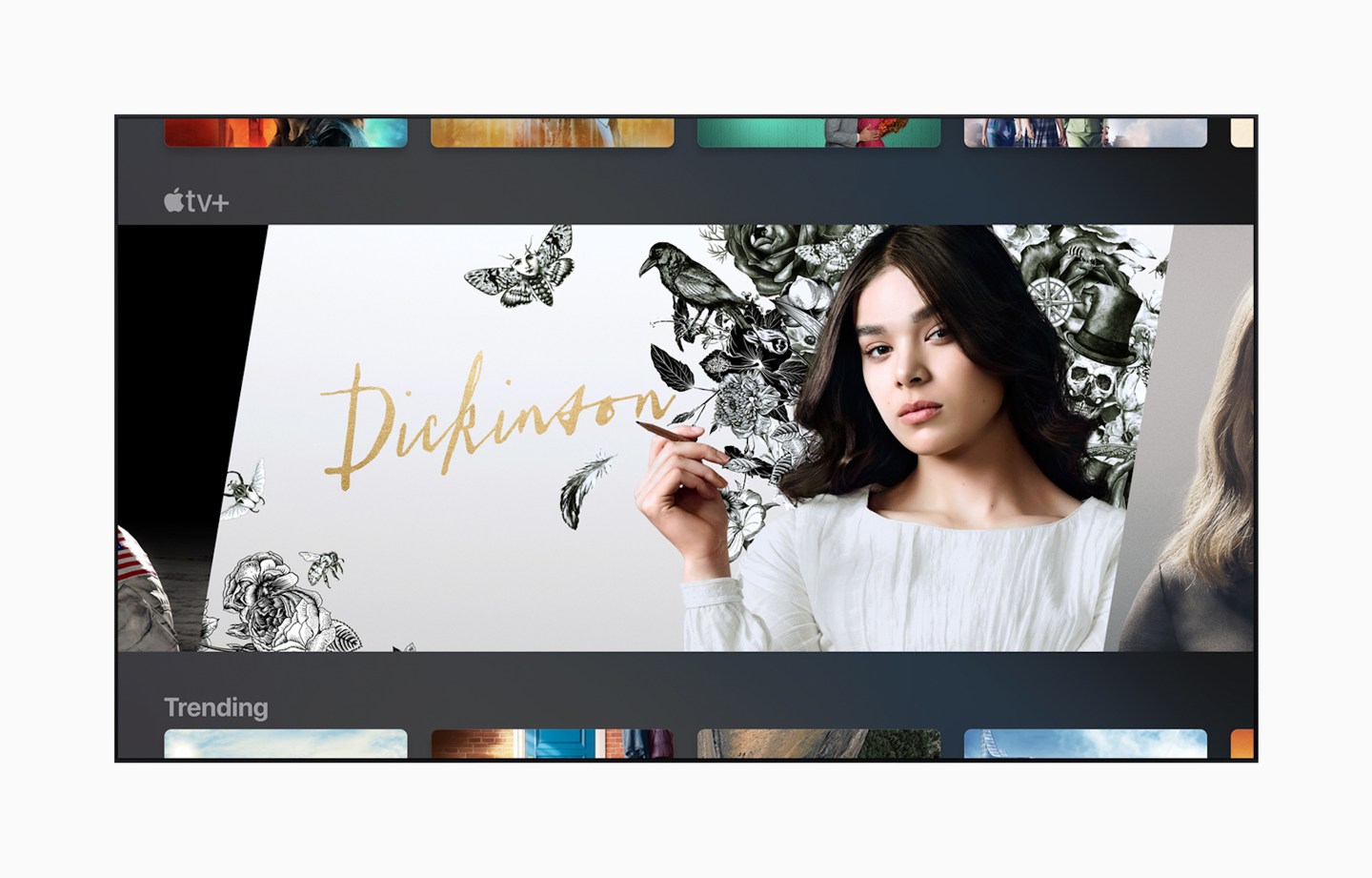 "Dickinson" is one of the new offerings from Apple TV+, which advertised heavily during the 2019 Primetime Emmy Awards.
Apple

Apple TV+ is surely already looking ahead to next year’s Emmys, when its first slate of original programming will be in contention for awards.

But the tech giant’s incipient streaming service, launching Nov. 1, made its presence very much known during this year’s ceremony, peppering commercial breaks with brief and resolutely polished polished teaser spots for original offerings like Truth Be Told and Servant.

The former, a true-crime thriller starring Aaron Paul and Octavia Spencer, centers on a podcaster who reopens her investigation into a murder after new evidence emerges that casts doubt on the conviction her original narrative helped to secure. And the latter, from M. Night Shyamalan, is billed as a TV mystery-box extension of his trademark, twist-heavy approach to storytelling.

Other series teased throughout the broadcast included For All Mankind, an alt-history drama in which the space race never ended; Dickinson, starring Hailee Steinfeld as a young, boundary-pushing Emily Dickinson; See, about a pair of twins with sight born into a world in which everyone’s blind; and Snoopy in Space, featuring animated Peanuts characters Apple inked a deal to make new series around. The Morning Show, starring Reese Witherspoon and Jennifer Aniston as TV anchors struggling to cope with a changing media landscape, has been positioned as Apple TV+’s first flagship series and was also teased via trailer spots.

Apple’s spots were consistent in emphasizing the company’s focus on prestige storytelling; the crop of shows, toplined by award-winning actors and polished to a premium-cable sheen, suggested that Apple TV+ will aim to rival HBO more than Netflix. Their placement during the Emmys, furthermore, could be read as a statement of intention, a watch-this-space promise to premiere series to compete directly against the most Emmy-awarded content creators.

“Apple is making a statement saying, ‘We’re coming out with really good-quality content too,'” said Rayburn. “Everyone’s comparing Apple to Disney+, Peacock, and HBO Max, but Apple’s doing something different.”

Marketing during the Emmys—a unique kind of TV event watched by content distributors, industry professionals, and general audiences—is a no-brainer for TV entrants invested in making a creative as well as commercial splash with their original offerings.

As Rayburn sees it, Apple’s focusing firmly on quality over quantity, committing to original series without licensing a back catalog of classic TV. Unlike WarnerMedia, Netflix, Amazon, and Hulu, Apple hasn’t moved to secure a Friends– or Seinfeld-style golden goose, instead focusing on buzzy originals like The Morning Show and Dickinson.

That’s because Apple’s playing a different game entirely, said the analyst, a product of the company’s uniquely powerful position in global markets.

That kind of dominance leaves Apple paying mere pennies to stream content to subscribers. One major benefit of Apple’s size, scale, and reach is that the company doesn’t need to profit from its streaming service in the short-term; with myriad sources of revenue beyond subscriptions, it’s entering the streaming wars in a radically different position than Netflix. (To wit, Apple plans to give away the service for an entire year to anyone purchasing a new Apple device.)

Apple TV+ raises tantalizing questions of which metrics to even use in terms of measuring success or failure in the streaming space (if any even exist). Nielsen ratings have no bearing on companies like Apple, Netflix, Hulu, and Amazon, all of which operate using cryptic calculuses of their own construction.

“That’s the best question I’ve been asked, and that nobody is talking about,” said Rayburn. “If Apple gets 10 million subscriptions in the first year, is that success or failure? We don’t know, because we have no way to measure it.”

Although Netflix is a well-established force in television at this point, its steadfast refusal to release viewership numbers for its series complicates attempts to measure its ultimate profit.

“In our industry, from day one, everyone said it was okay that Netflix was losing money,” said Rayburn. “It was the Amazon model of ‘get big fast, put all the money back into the business, and when you reach economics of scale, then it makes sense.’ Well, Netflix has over 150 million subscribers—I would call that a scale—and it’s still losing money.”

In the case of Apple TV+, just over a month away, success may (at least in the short-term) look like launching series that dominate the pop-culture conversation.

Those available at launch in the service’s freshman class—from Dickinson, with its lively, feminist sensibility, to See, which has the epic feel of a Game of Thrones (and even shares its lead, Jason Momoa, with that HBO series)—certainly offer diversity. And especially given Apple TV+’s $5-per-month price point, the company appears bent on providing an answer to HBO that could prove more accessible than anything on premium cable. Advertising during the Emmys ceremony what it hopes will be a prestigious first few months for the service, Apple’s message to Emmy audiences could be boiled down to one simple promise: see you next year.