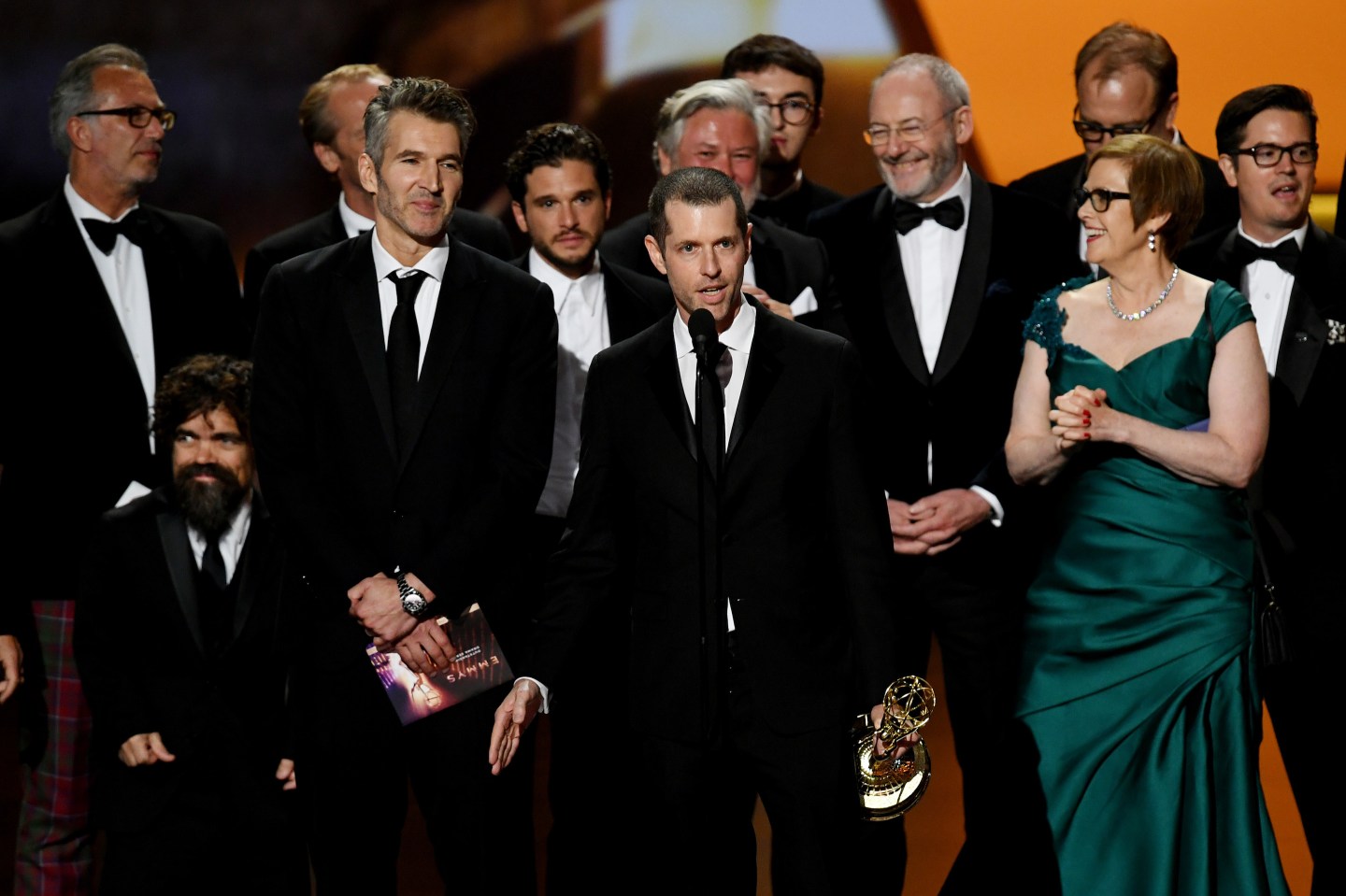 “Game of Thrones” resurrected the Iron Throne at Sunday’s Emmy ceremony, ruling as top drama on a night of surprises in which “Pose” star Billy Porter made history and the comedy series “Fleabag” led a British invasion that overturned expectations.

“This all started in the demented mind of George R.R. Martin,” said “Game of Thrones” producer David Benioff, thanking the author whose novels were the basis of HBO’s fantasy saga.

Porter, who stars in the FX drama set in the LGBTQ ball scene of the late 20th century, became the first openly gay man to win a best drama series acting Emmy.

“God bless you all. The category is love, you all, love. I’m so overjoyed and so overwhelmed to have lived to see this day,” said an exuberant Porter, resplendent in a sparkling suit and swooping hat.

Amazon’s “Fleabag,” a dark comedy about a dysfunctional woman, was honored as best comedy and earned top acting honors for its British creator and star, Phoebe Waller-Bridge, and a best director trophy.

“This is getting a ridiculous,” Waller-Bridge said in her third trip to the stage to collect the top trophy.

Her acting win blocked “Veep” star Julia Louis-Dreyfus from setting a record as the most-honored performer in Emmy history.

“Nooooo!” a shocked-looking Waller-Bridge said as Louis-Dreyfus smiled for the cameras. “Oh, my God, no. Thank you. I find acting really hard and really painful. But it’s all about this,” she said, her acting trophy firmly in hand.

In accepting the writing award earlier, she called the Emmy recognition proof that “a dirty, pervy, messed-up woman can make it to the Emmys.”

Porter, a Tony and Grammy Award winning actor, relished his groundbreaking moment, quoting the late writer James Baldwin, Porter said it took him many years to believe he has the right to exist.

English actress Jodie Comer was honored as best drama actress for “Killing Eve.” She competed with co-star Sandra Oh, who received a Golden Globe for her role and would have been the first actress of Asian descent to win an Emmy in the category.

“My mum and dad are in Liverpool (England) and I didn’t invite them because I didn’t think this was going to be my time. One, I’m sorry, two I love you,” Comer said after saluting Oh.

Peter Dinklage, named best supporting actor for “Game of Thrones,” set a record for most wins for the same role, four, breaking a tie with Aaron Paul of “Breaking Bad.”

“I count myself so fortunate to be a member of a community that is about nothing but tolerance and diversity, because in no other place I could be standing on a stage like this,” said Dinklage, a little person.

The auditorium erupted in cheers when Jharrel Jerome of “When They See Us,” about the Central Park Five case, won the best actor award for a limited series movie.

“Most important, this is for the men that we know as the Exonerated Five,” said Jerome, naming the five wrongly convicted men who were in the audience. They stood and saluted the actor as the crowd applauded them.

It was the only honor for the acclaimed Netflix series of the evening; “Chernobyl” won the best limited series honor.

Michelle Williams, honored as best actress for her portrayal of dancer Gwen Verdon in FX’s limited series “Fosse/Verdon,” issued a call to arms for gender and ethnic equality.

She thanked the network and studio behind the project for “supporting me completely and paying me equally because they understood … when you put value into a person, it empowers that person to get in touch with their own inherent value. And where do they put that value, they put it into their work.”

“And so the next time a woman and, especially a woman of color, because she stands to make 52 cents on the dollar compared to her white male counterpart, tells you what she needs in order to do her job, listen to her,” Williams said.

Patricia Arquette won the trophy best supporting limited-series or movie actress for “The Act.” She paid emotional tribute to her late trans sister, Alexis Arquette, and called for an end to prejudice against trans people, including in the workplace.

Alex Borstein and Tony Shalhoub of “The Marvelous Mrs. Maisel” won best supporting acting awards at the ceremony, which included early and varied messages of female empowerment after the hostless ceremony.

“I want to dedicate this to the strength of a woman, to (series creator) Amy Sherman-Palladino, to every woman on the ‘Maisel’ cast and crew,” Borstein said, and to her mother and grandmother. Her grandmother survived because she was courageous enough to step out of a line that, Borstein intimated, would have led to her death at the hands of Nazi Germany.

Shalhoub added to his three Emmys which he earned for his signature role in “Monk.”

The awards opened without a host as promised, with an early exchange pitting Ben Stiller against Bob Newhart.

“I’m still alive,” Newhart told Stiller, who introduced him as part of a wax museum comedy hall of fame that included Lucille Ball and George Burns.

Kim Kardashian West and Kendall Jenner drew some mocking laughter in the audience when they presented their award after Kardashian West said their family “knows firsthand how truly compelling television comes from real people just being themselves.”

An animated Homer made a brief appearance on stage until he was abruptly crushed, with Anderson of “black-ish” rushing in to, as he vowed, rescue the evening. He called “Breaking Bad” star Cranston on stage to tout the power of television from its beginning to the current golden age.

—From Mr. Robot to Modern Family, these are the shows saying goodbye this season
—Behind the ’80s TV comeback, from ‘Stranger Things’ to ‘GLOW’
—How TV’s music supervisors make your favorite moments pop through song
—Inside Succession with executive producer Adam McKay and actor Kieran Culkin
—Women creators are stealing the spotlight on TV
Follow Fortune on Flipboard to stay up-to-date on the latest news and analysis.