From ‘Modern Family’ to ‘Mr. Robot’: Some of Your Favorite TV Shows Are Saying Goodbye 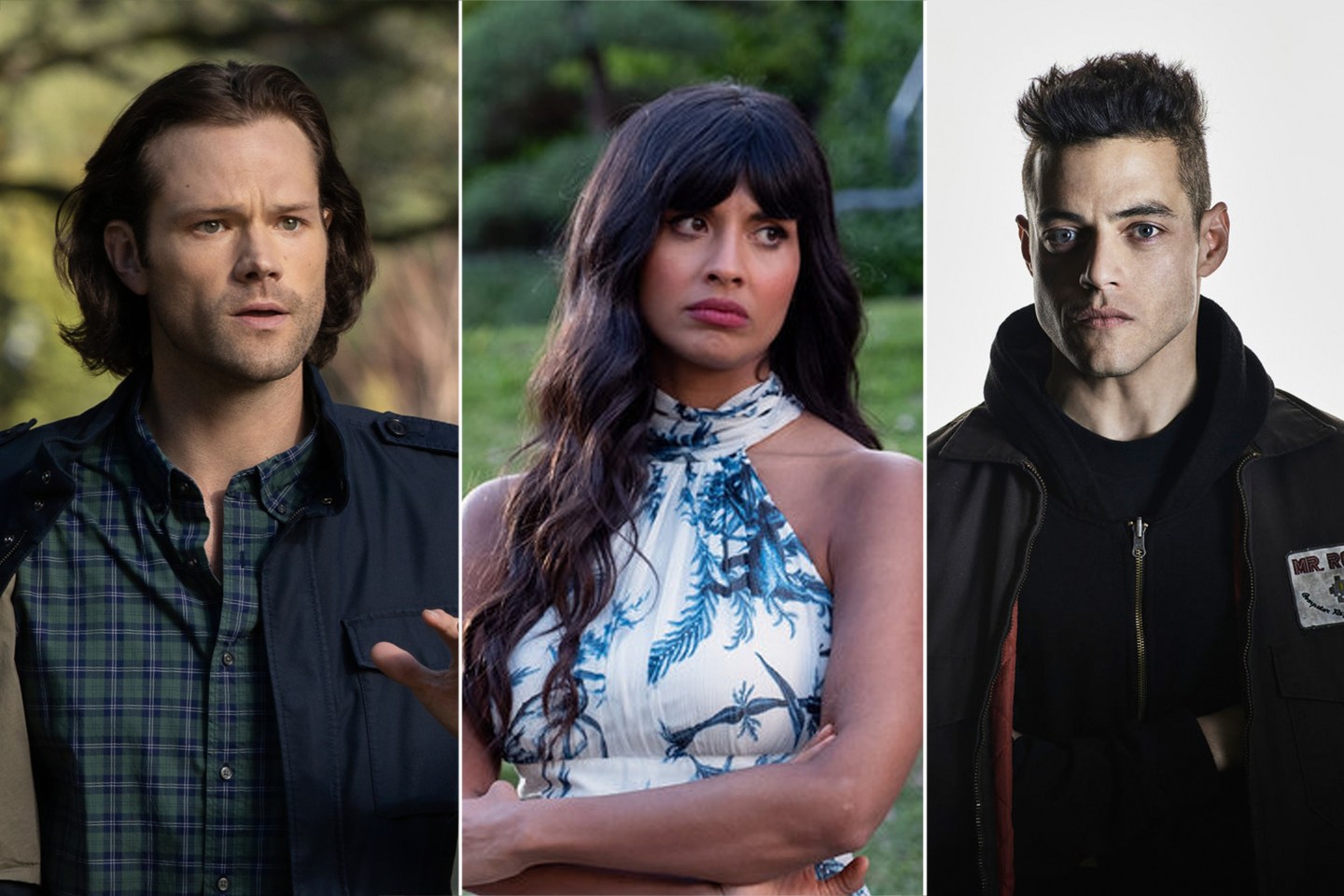 Saying goodbye to your favorite TV show is never easy, but it helps when you have time to mentally prepare. While some TV shows were unlucky enough to be canceled at the end of last season, never to return to primetime, others were given the gift of a final season to wrap things up, which means viewers will have time for a long goodbye.

“I don’t remember ever hearing in advance about so many shows ending,” says Marc Berman, TV analyst and editor-in-chief of Programming Insider. “Once upon a time, shows would end and a lot of times there was no conclusion. It just went off the air. The fact that all of these shows have already pre-announced it’s the last season means they’re wrapping things up and will give a conclusion.”

Of course, tying up loose ends in a way that satisfies hardcore fans has its challenges. As The Good Place creator Mike Schur tells Fortune: “You just have to execute the story you think makes the best ending, and hope it feels satisfying for the people who’ve been there from the beginning.”

From once white-hot hits that have cooled recently to network stalwarts that continue to chug along in the ratings, we’ve outlined the shows entering their final season below (in chronological order), along with some clues about how they’ll end.

Few shows can lay claim to being as dramatic as the hip-hop drama Empire—unfortunately, last season a lot of that drama happened off-screen. In January, Jussie Smollett, the actor who plays Jamal Lyon, was accused of staging an attack on himself. Though criminal charges against Smollett were dropped in late March—and his contract was extended through season six, the actor will not be returning for the final season after all.

Empire showrunner Brett Mahoney recently told TVLine that for the sixth season, Jamal and his new husband Kai will stay in London (and off the show). “Jamal is taking a sabbatical from the family. He doesn’t want to be caught up in the Lyon family drama.”

Terrence Howard, who plays Luscious, recently said he’s giving up acting after the show wraps. But before then, viewers will have a chance to see Luscious reunite with his ex, Cookie, played by multi-Emmy-nominated Taraji P. Henson. “Somehow or another, we always find our way back together, don’t we?” Howard’s Luscious asks Henson’s Cookie in the Empire season six trailer.

If the 10th season finale where Haley (Sarah Hyland) gives birth to twins felt like a series finale, that’s because it nearly was. The decision to do another season was close, as co-creator Steven Levitan told EW. “It was very close. I honestly thought season 10 would be our last, but, as we got into it, we realized there’s still some new territory to explore,” said Levitan. “For example, Phil and Claire with two grandchildren in the house. Also, if I’m being really honest, our cast and crew really is like a family, and I think we just weren’t quite ready to say goodbye.”

Meanwhile, If you want to take a trip down memory lane with the extended Dunphy family, you can binge-watch all of the past season of Modern Family on Hulu.

‘How to Get Away with Murder‘

Emmy Award-winning Viola Davis will return as Annalise Keating for one final season of teaching her students how to get away with murder.

ABC has been promoting the show’s “Killer Final Season” with good reason. “Every crime [that’s been committed] will come up for grabs, be answered for, and will have to be paid for,” series creator Pete Nowalk told The Hollywood Reporter. “Each character will have to decide what they’re willing to do and to see if they’re willing to sell other people out.”

What do you do when the star of your series was fired after colleagues accused him of sexual misconduct?

If you’re the creators of Transparent, you turn what was originally going to be a traditional fifth season into Transparent: Musicale Finale, a 100-minute movie that wraps up the series with a musical extravaganza.

With music and lyrics by Faith Soloway, the movie opens with the off-screen death of protagonist Maura Pfefferman, who had been played by Jeffrey Tambor until he was written off the series after sexual assault allegations last Spring.

When the NBC comedy starring Kristen Bell and Ted Danson premiered in 2016, audiences and critics were wowed by the sitcom’s unconventional premise. Each season the series has continued to surprise audiences with daring plot twists. Most surprising of all is that an existentialist show that doles out philosophy weekly managed to succeed in primetime.

Meanwhile, The Good Place is preparing viewers for its final season with The Selection, a six-episode digital series, which is available online or by downloading the NBC app.

It’s been almost two years since the third season of the Emmy-nominated drama wrapped, and fans are eager to see what Rami Malek’s Elliot Alderson and his alter-ego Mr. Robot (Christian Slater) have been up to.

The critically acclaimed cyber-thriller, which earned Malek an Emmy for Best Drama Actor in 2016, is preparing for a dramatic conclusion. In the trailer for the fourth season, Mr. Robot, played by Christian Slater, tries to warn Elliot away from the choices he’s planning to make.

“If you go down this path, it’ll never end,” Mr. Robot cautions. “It will always be something else. Another symbol to destroy, more people to save. This is an endless war. What you’re about to do is crossing a line.”

The political drama starring Tea Leoni as Elizabeth McCord, a former CIA analyst and poli-sci professor-turned U.S. Secretary of State, is preparing to leave office, so to speak.

Fiction will brush up against reality as former Secretary of State and 2016 presidential candidate Hilary Rodham Clinton, as well as former Secretaries of State Madeleine Albright and Gen. Colin Powell play themselves in the season five premiere.

The demon-hunting Winchester Brothers, Sam (Jared Padalecki) and Dean (Jensen Ackles) have encountered countless monsters over the show’s run. In the season 14 finale, they confronted the most powerful villain of all, God (in the form of their former friend Chuck).

Heading into season 15, the brothers have a lot on their plate. They’ll confront the end of the world and will grapple with the idea of free will.

The eighth and final season of Arrow will see Oliver Queen (Stephen Amell) traveling the world on a mission to save the multiverse along with his best friend, John Diggle (David Ramsey).

Rather than the usual 23 episodes, the final season of Arrow will consist of only 10 episodes, one of which will be part of the Crisis on Infinite Earths crossover.

Showrunner Beth Schwartz said that in anticipation of the final season, season seven wrapped up “the show as people have understood it.” She described the final 10 episodes to TV Guide as “greatest hits” with many returning guests and “tying up some stories you could have seen in Season 3 or 2.”

‘The Man in the High Castle‘

Based on a novel by Phillip K. Dick, the dystopian drama depicts an alternate reality of history where the Axis won World War II, leading to the two Germany and Japan controlling different areas of the U.S.

The final season of the series, “will be rocked by war and revolution,” per the show’s official logline. “The Resistance becomes a full-blown rebellion, driven by Juliana Crain’s (Alexa Davalos) visions of a better world. A new Black insurgent movement emerges to fight the forces of Nazism and imperialism…”

Correction, Sept. 19, 2019: The text of this article has been changed to reflect that Faith Soloway, not Jill Soloway, wrote the music and lyrics for Transparent: Musicale Finale.

—Some of this fall’s most buzzed about TV shows will feature familiar faces
—Here’s when your favorite TV shows return this fall
—From GLOW to Stranger Things, behind the ’80s TV comeback
—Music supervisors for Better Call Saul, Russian Doll, and Fosse/Verdon talk about their craft
—Inside Succession with executive producer Adam McKay and actor Kieran Culkin
Follow Fortune on Flipboard to stay up-to-date on the latest news and analysis.