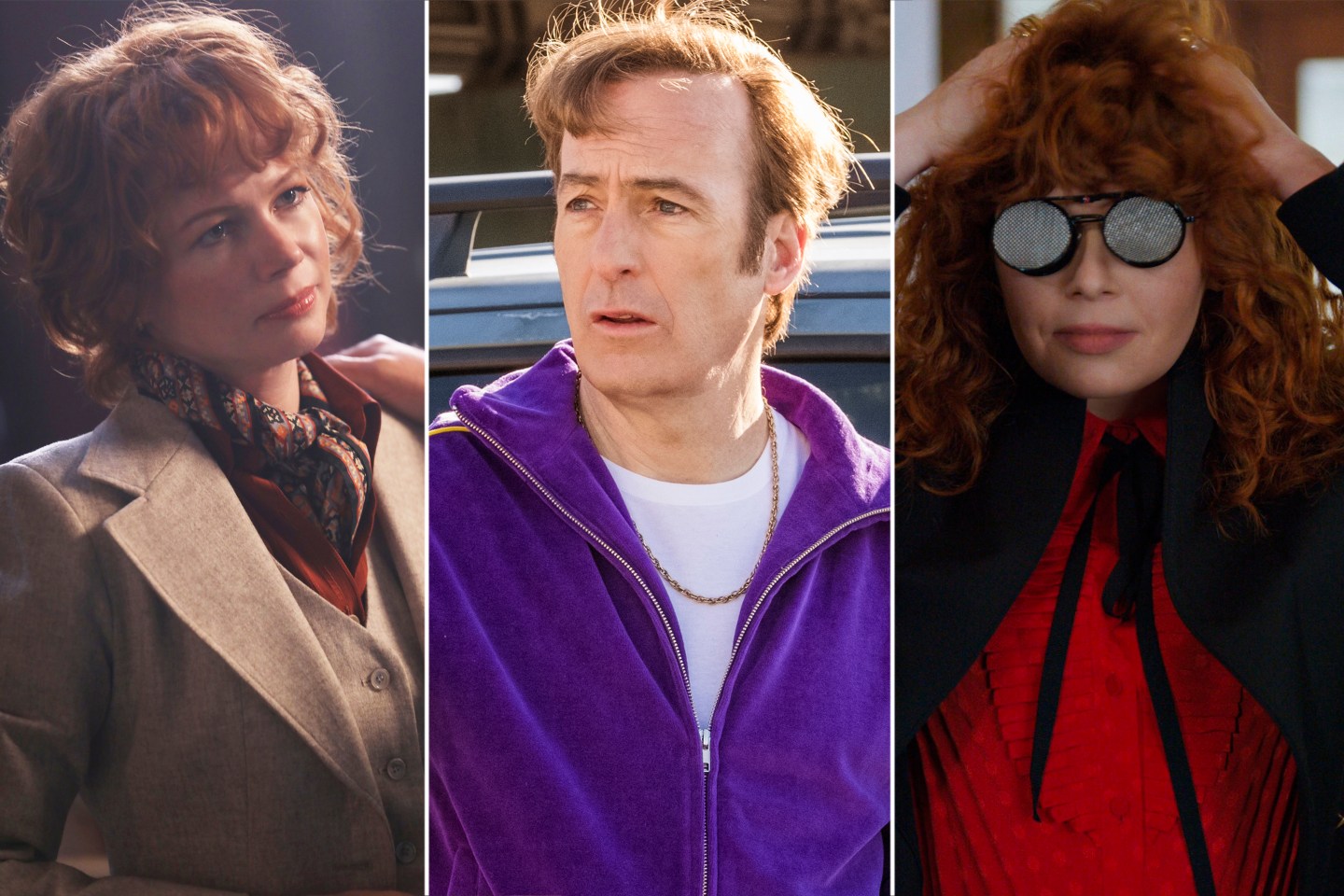 Songs used to be the unsung heroes responsible for deepening some of television’s most moving moments, such as when creator David Chase melded Journey anthem “Don’t Stop Believin’ ” to his now-iconic Sopranos finale.

But two years ago, music supervisors—the people who pick and “clear” songs for use in TV shows—finally started getting their due when the National Academy of Television Arts & Sciences created an Emmy category for Outstanding Music Supervision. In 2017, Big Little Lies’ Sue Jacobs took home the category’s first trophy after unearthing the HBO series’s indelible opening credits number—Michael Kiwanuka’s “Cold Little Heart.”

“There are so many levels to each decision on a show like Russian Doll,” she tells Fortune. “It’s never just, ‘Oh, we like this song so let’s use it for that scene.’ You want to find a piece of music that feels authentic to the world of your characters, whether it’s through vocal quality, the instrumentation, the overall feel. Sometimes, when you put the right song to a scene, there’s this glue that happens.”

For Better Call Saul nominee Thomas Golubić, a former DJ at Los Angeles radio station KCRW, character arcs usually dictate song choices. Better Call Saul season 4 opens with a bleak trip to the hospital for Jimmy McGill, a.k.a. Saul Goodman, a.k.a. Gene Kerkovich (Bob Odenkirk), accompanied by the Ink Spots’ eerie harmonies from their 1940 hit “We Three (My Echo, My Shadow and Me).”  Golubić says, “Jimmy can’t escape his past, so these three characters are kind of tacked together with a lovely song that has a kind of ghostly quality hovering above the scene.”

Sometimes Golubić uses a tune as a sly counterpoint to the on-screen drama. Midway through the season’s seventh episode, German engineers construct a methamphetamine lab in an underground cave to the tune of Burl Ives’s jolly 1949 folk-pop ditty “Big Rock Candy Mountain.” Golubić says, “I always viewed these engineers as being a little bit like the Seven Dwarfs going into the mines—‘Heigh-ho, heigh-ho, off to work we go.’ Once that came to us, it led us to this playful child’s song.”

In his biggest season 4 challenge, Golubić and his SuperMusicVision colleagues completely retooled “Something Stupid,” originally recorded in 1967 by Frank Sinatra and his daughter Nancy. Written into the script, the lyrics were perfect, but the track was problematic because of its brevity and expensive licensing rights.

So Golubić solicited versions of the song from indie artists, ultimately hiring Israeli duo Lola Marsh to deliver an arrangement of “Something Stupid” tailored precisely to the visuals that depicted Jimmy drifting apart from girlfriend Kim (Rhea Seehorn).

“For the stereo mix, we moved the female vocal to the left side, where Kim was, and right side for Jimmy.”

Russian Doll’s Rose, working closely with star-producer-writer Natasha Lyonne, drew upon six decades of pop music to reinforce the show’s time-loop premise. Rose says, “Because Natasha’s character, Nadia, is constantly dying and coming back, there’s this sort of suspension of time. We played around with that time element by pulling songs from all different eras.”

Russian Doll’s de facto theme song, “Gotta Get Up,” comes courtesy of Harry Nilsson, who recorded the perky track in 1971. Each time Nadia “resets” her life after dying, “Gotta Get Up” accompanies the glum antihero’s reentry into waking life. “The song has this happy, bounding quality of the piano at the beginning, but then when you actually listen to the lyrics, they’re pretty devastating,” says Rose. “And also, as Natasha likes to point out, Harry Nilsson was a tragic character.” The hard-drinking singer-songwriter died of heart failure at age 52.

“Nadia in our show is painted as kind of a tragic character too, so there were some nice parallels there.”

Rose, who runs music supervision company Noise/Racket, visits blogs, watches live bands, and forages for vinyl obscurities at used-record stores. She then organizes her favorite tunes into an ever-morphing set of playlists.

“I’m scared to say how many folders I have on my computer—hundreds if not thousands with names like ‘Quirky French,’ ‘Sixties Soul Deep Cuts,’ ‘Breakup Music,’ ‘Texas Music,’ ” she says. “I have one folder called ‘Old Joy,’ and I don’t know what that means except that every song in that folder brings me joy. I’ve fallen in love with hundreds of bands. You just have to table them until the right show comes along.”

Along with their song-hunting prowess, music supervisors need considerable business acumen to cut deals with record companies (for the master recording) and publishers (for the song’s melody and lyrics).

Golubić struggled mightily when he wrangled permission from ABBA to use the Swedish band’s power ballad “Winner Takes It All” in a Better Call Saul karaoke sequence. “It was so nerve-racking because they wanted approvals for everything, and we had no plan B,” he recalls. “I honestly never felt as much like I wanted to stop being a music supervisor than when we were trying to clear ABBA.” Rose, who studied music and business at USC, notes, “You have to be comfortable negotiating, working with budgets, licensing, dealing with all the language and terms. There’s a lot of business to music supervision.”

Meanwhile, Fosse/Verdon music supervisor Steven Gizicki had a relatively easy time clearing the classic show tunes performed by cast members in the FX series about choreographer Bob Fosse (Sam Rockwell) and dancer Gwen Verdon (Michelle Williams). “This is the Great American Songbook we’re talking about,” he explains. “We didn’t get turned down by anybody, because it’s a fantastic premise, and music publishers want their catalog pieces to be reexposed to a new audience.”

Gizicki, a former record-label marketing executive, earned his stripes supervising the songs on La La Land and recently wrapped production on the film adaptation of Lin-Manuel Miranda’s Broadway musical In the Heights. “For me, music supervision is really about putting on a show,” he says. “I’m on set every day, and my job is to make sure the talent knows what to do musically at each spot in the story.”

In the case of the Kander and Ebb ballad “Nowadays,” from Chicago, Michelle Williams was outfitted with a hidden lavalier mic so she could perform live alongside a piano player as cameras rolled. He recalls, “My jaw hit the floor watching Michelle sing it so expertly. As Gwen, she opens up the sheet music and performs the song as if she’s never seen it before, take after take after take.”

When they perform, Gizicki says, “I’m like the sync police, looking at the monitors very closely to make sure everyone mouths things properly. I remember being on the soundstage when we rehearsed ‘Mein Herr,’ from Cabaret. The dancers in the background tried to lip-synch these German lyrics, but I looked over at Alex, like, ‘They don’t know what they’re singing. Help!’

“We pulled these lovely dancers into a little storage room, sat on the floor, and gave them German phonetic lessons until they understood the words. So part of my job is to prepare everything. Then, on the day of the shoot, I spot the weird things that happen to come up and fix them.”

—From GLOW to Stranger Things, behind the ’80s TV comeback
—The real strategy for Apple TV+ isn’t to compete with Netflix—it’s this
—Viacom and Tyler Perry enter the streaming wars with BET+
—Recap: Succession season two episode five
—Inside Succession with executive producer Adam McKay and actor Kieran Culkin
Follow Fortune on Flipboard to stay up-to-date on the latest news and analysis.