And the Oscar for Best Picture Will Go to… 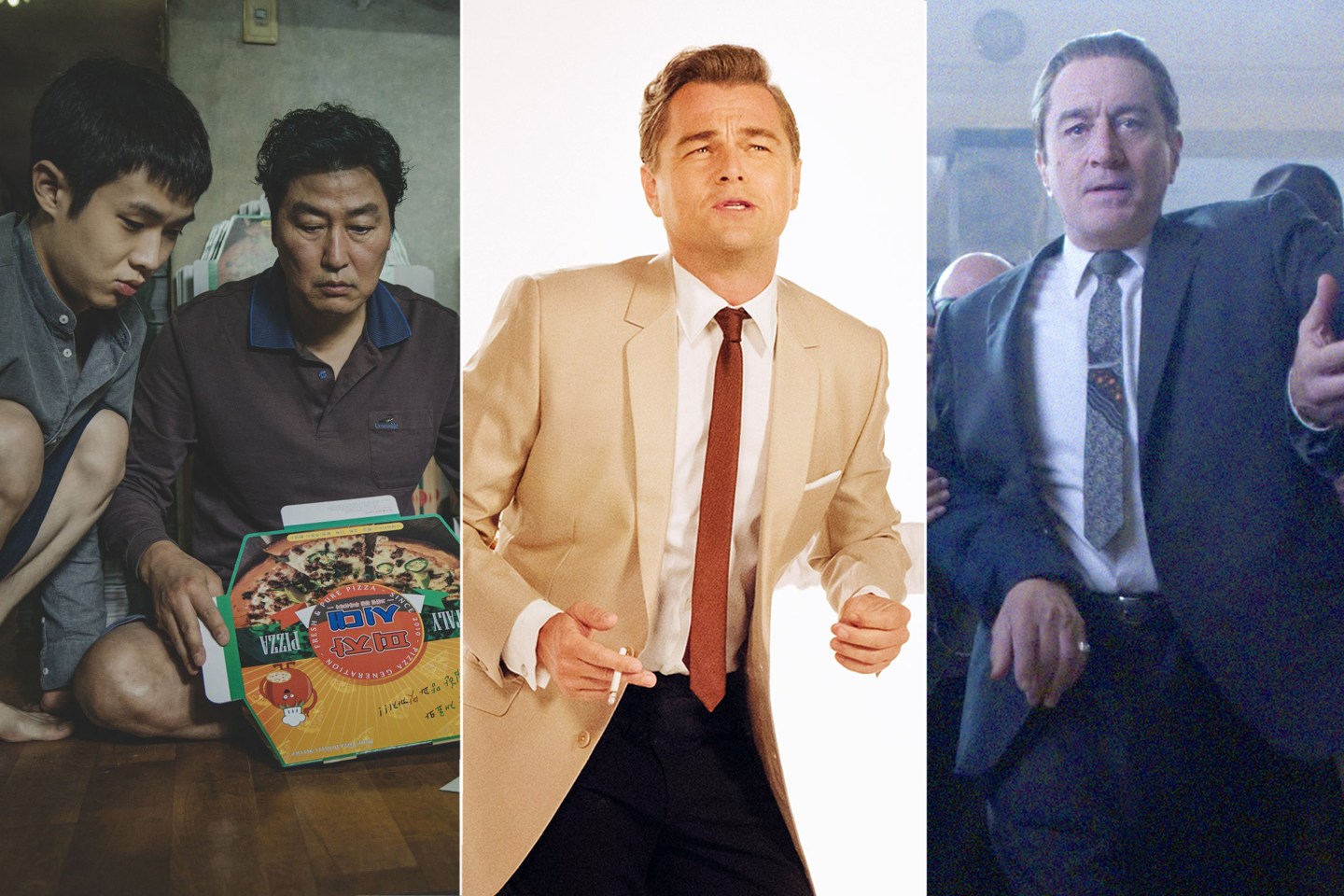 Or it could be any number of the many high profile “Oscar bait” movies that will hit theaters before the end of the year.

The Oscars ceremony is still nearly four months away (Feb. 9, 2020), but awards season has officially kicked into high gear now that the key fall festivals—Telluride, Venice, and Toronto—have wrapped. In the next few months, studios will shell out big bucks on publicity and marketing, including billboards along Sunset Boulevard, “For Your Consideration” ads in the Hollywood trade publications, media appearances, and VIP screenings for awards hopefuls.

But prognosticators are divided this year, unlike in some previous years, where a clear frontrunner emerged from the fall festivals (such as 12 Years a Slave in 2014 or Spotlight in 2016). The only real consensus is that there will be a lot of competition in the Best Picture race.

“In past years, by this point, there was absolutely a film that was ahead of the pack,” says Erik Anderson, founder of Awardswatch, a website devoted to entertainment awards predictions. “We’re definitely not seeing a clear frontrunner and last year, Green Book really threw everything out the window in terms of how we do predictions.”

Gold Derby, a site that compiles award predictions, recently shared the news that Martin Scorsese’s The Irishman has moved into first place among Best Picture contenders, with Quentin Tarantino’s Once Upon a Time in Hollywood close behind. Given that the Academy has rewarded movies about Los Angeles and about show business as a whole over the past decade (think La La Land, Argo,The Artist, Birdman), Tarantino’s film could benefit from nostalgia for old Hollywood.

Meanwhile, Anderson is betting on Noah Baumbach’s Marriage Story, an emotionally grueling portrait of a couple in the middle of a divorce, to win Best Picture. “I have Marriage Story at the top of my list because it’s the only film that’s playing all the fall festivals—Telluride, Toronto and N.Y.,” says Anderson. “It’s also about the theater and film industry because the two main characters [played by Adam Driver and Scarlett Johansson] come from both of those worlds.”

‘Parasite’ is coming on strong

But there are other strong contenders beyond the usual suspects. Bong Joon-ho’s Cannes Palme d’Or Winner Parasite is quickly ascending the Oscar odds charts. Per IndieWire, the bracing social satire’s $125,000-per-theater average in three New York/Los Angeles theaters is the biggest specialized limited opening of the year. Every weekend screening of the film at the IFC Center in New York, some featuring Q&As with Bong and his cast members, sold out on opening day, Oct. 11. “No foreign-language film has ever opened close to these numbers,” writes IndieWire’s Tom Brueggemann.

In his latest “Frontrunner Friday” report, Anderson bumped Parasite up to the number two spot. “It is a massive critics’ favorite. It is going to be on the top of every critic’s list at the end of December,” says Anderson.

“Parasite has paved a golden road for itself as it is already sitting pretty as the best-reviewed film of the year,” according to Deadline.

Parasite is widely considered the front-runner to win best international feature film (formerly called “best foreign-language film”). But it’s gaining enough critical acclaim that could take it all the way to Best Picture, which would make it the first non-English language film to earn an Oscar in that category (not including The Artist, which was a French film, but was mostly silent).

Another potential Oscar contender is Taika Waititi’s JoJo Rabbit, which hits theaters on Oct. 18. The polarizing film, which features Waititi as a fictionalized Hitler, won the Toronto International Film Festival’s People’s Choice Award. The award is often a bellwether for Oscar Best Picture winners. Ten of the last 11 winners of the People’s Choice Award have been nominated for Best Picture, including 12 Years a Slave, The King’s Speech, Slumdog Millionaire, and last year’s Green Book.

Christmas was once seen as the ideal time to release a potential Oscar contender, but a November release worked well for last year’s Best Picture winner, Green Book, which also saw fellow nominees Bohemian Rhapsody, Roma, and The Favourite premiere that month.

This November will see the release of other potential Best Picture nominees, including The Irishman and Marriage Story, as well as Marielle Heller’s It’s a Beautiful Day in the Neighborhood, a fictional take on Fred Rogers’s life featuring Oscar winner Tom Hanks as Mr. Rogers, and Ford v. Ferrari from Academy Award-nominated writer-director James Mangold.

December will bring a new slew of potential contenders, including Greta Gerwig’s highly anticipated Little Women, which will hit theaters on Christmas Day, as will Sam Mendes’s World War I epic 1917. Clint Eastwood’s biopic Richard Jewell will premiere at the American Film Institute Fest in November, ahead of a public release Dec. 13.

Bombshell, the drama inspired by the sexual harassment case that brought down Fox News chief Roger Ailes, entered the awards conversation in a big way following its first critics screening on Oct. 13. The strong reviews, the hot-button timely topic, plus powerful performances by Nicole Kidman, Charlize Theron, and Margot Robbie, makes the film—also officially being released in December—a likely contender for Best Picture.

With the date of the 92nd Academy Awards telecast bumped two weeks earlier to Feb. 9 (from the previously announced Feb. 23), Oscar season is more abbreviated than usual. “It’s going to be intense. It’s going to be the shortest Oscar season we’ve ever had,” Anne Thompson, editor-at-large, IndieWire, told Fortune in May.

The shortened Oscar season will cut down viewing and campaigning time for films released later in the year. “We’re already in an era where a December release has a next-to- impossible time winning Best Picture because it’s just not going to be seen. I have 1917 in my list, but it’s a Christmas release and Oscar voting starts Jan. 2,” says Anderson. “There’s going to be very little time for a late-breaking movie to generate or build momentum when other films have already done that.”

Last year, Netflix’s Roma won a slew of key awards, but it didn’t lock down the Best Picture win. The odds are better for Netflix this year, since the streaming service has not one, but (at least) three films in serious contention for Best Picture: The Irishman, Marriage Story, and The Two Popes, a biographic drama directed by Oscar-nominated Brazilian director Fernando Meirelles (City of God, The Constant Gardener) and starring Anthony Hopkins as Pope Benedict XVI and Jonathan Pryce as Cardinal Jorge Mario Bergoglio, the future Pope Francis.

The Irishman, with a cast of Scorsese regulars, including Robert De Niro, Al Pacino, Joe Pesci, and Harvey Keitel and a script by Academy Award-winning Schindler’s List screenwriter Steve Zaillian, might have the best shot at Best Picture.

Netflix, which ponied up $159 million to make the three-and-a-half hour mob epic after other studios passed, recently announced it will present the film in Broadway’s Belasco Theatre from Nov. 1 to Dec. 1.

“Last year Netflix released Roma in theaters for a full three weeks and they’re doing that this year with all of their awards contenders, some of them, like The Marriage Story, for a full month,” says Anderson, who says the limited theatrical releases might not affect Netflix’s Oscar chances. “The Academy really enjoyed Roma, which got 10 nominations and three wins, but just held back from Best Picture.”

Wild cards in the mix

In recent years, the Best Picture winners have defied previously held notions about what type of films are more likely to win an Oscar.

Last year, when Peter Farrelly’s divisive Green Book won Best Picture, “it totally sidestepped so many things that for the past 20 years would have completely hobbled it,” says Anderson, who points out that Green Book didn’t get a SAG cast nomination, a traditional bellwether for Oscar Best Picture nominees.

And though they’re not “typical” Best Picture material, Hustlers, the crime drama starring Jennifer Lopez and Constance Wu as scheming strippers, and Joker, featuring a disturbing and riveting Joaquin Phoenix, could also be wild cards in the Best Picture category. “They’re both really big box office hits and we’ve seen the Academy push for that in the last couple of years,” says Anderson.

Oscar experts know that anything is possible—at least until final Oscar voting closes on Feb. 4.

—The best movies that came out of the 2019 New York Film Festival
—Kevin Smith isn’t done being ridiculous just yet
—Recap: Succession season two episode 10
—Nick Kroll on the “meta experience” of making “Big Mouth”
—How Comedy Central grew up to hold its own against Netflix
Follow Fortune on Flipboard to stay up-to-date on the latest news and analysis.