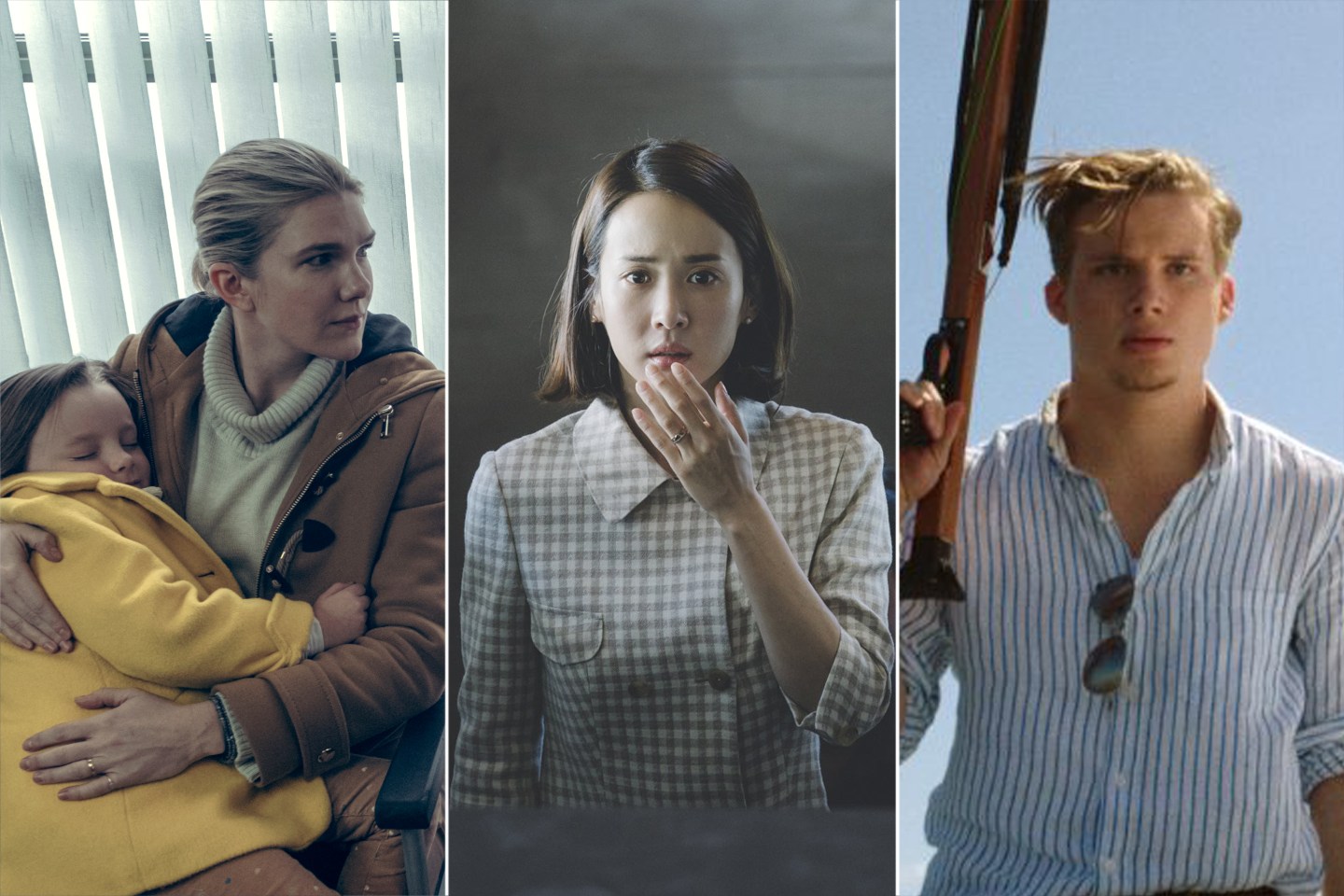 SEE IT: ‘Parasite’ (N.Y. and L.A. theaters, expanding next week)

Only the legendary Bong Joon-ho (at this point not a genre filmmaker so much as an entire genre unto himself) could have made Parasite, a rip-roaring and fiendishly well-observed social satire that totally mutates about halfway through, becoming something richer, darker, more deranged, and wholly unexpected.

That bait-and-switch must be experienced blind; no one steps knowingly into a bear-trap. What can be said of Parasite is that it’s a home-invasion story tailor-made for our times, about a destitute South Korean family that rather brilliantly carries out a plot to insinuate itself into the luxurious household of a very rich one, without them even noticing, by gradually replacing the hired help with members of their own family. Bong toggles between giddy farce, Hitchcockian suspense, and mordant slapstick throughout this first chapter of Parasite, sketching the poor Kim family as a slyly mischievous clan of strivers more than capable of weaponizing the wealthy Park family’s biases against them.

The rich aren’t like us, you see, not anymore. In Parasite, there’s biting truth to the idea that wealth will erode your humanity. The Parks sniff the air when their servants are near, displeased by the idea of smelling them around the home they service; but there’s a telling, damning moment where Mr. Park and his wife get off by role-playing as drug-addicted bottom-feeders as, revolted and ashamed, the Kims are forced to bear witness. These are sick people, but they are sick in the way of managers in an industrial plant who think, just because they no longer work the factory line, they’re immune from the effects of breathing its poisoned air.

Parasite slates its thirst on themes of class rage, economic inequality, innate tribalism, and the inky-black tar pits of greed and hate that can lurk beneath the most polite and polished of veneers. In this, it’s an expressly timely film though not explicitly or portentously so. On the contrary, its politics are slick, complex, and foundational; the fault lines of economic class and status along which these characters live were formed generations ago. What’s radical is the glee its characters exude whenever the ground around them starts to shake.

Bong’s social commentary is sharp-toothed and grinning broadly enough to bear every fang. His is undoubtedly also one of the year’s most cleverly directed films. Bong envisions the Park household as a modernist fortress, gleaming and clinical, concrete and glass, the kind of architectural horror that feels like its own character. Pay attention as Bong sends key characters scurrying up and down its stairs, and when he does so; the little touches are the most important in this film’s dazzling visualization of class and consequence. Parasite is a carnivorous and ferocious feat of filmmaking, bloodsport framed with a formal brilliance and brutally comic verve; it’s one of the year’s best.

There’s no actual harpoon in Harpoon, Rob Grant’s impressively nasty debut about three treacherous friends adrift at sea. The item in question—a poorly thought-out birthday gift to one rich-kid sociopath from the best friend who’s potentially sleeping with his girlfriend—is actually a speargun.

Small difference to non-nautical folk, perhaps, but it speaks to the coy sense of humor on display across this bloody black comedy, in which Jonah (Munro Chambers), Richie (Christopher Gray), and Sasha (Emily Tyra) come up against dehydration, infected wounds, and their own dark secrets after Richie’s yacht becomes disabled and carries all three out into the Atlantic.

To call the friends dysfunctional is to perhaps saddle that word with too much baggage; the biggest leap of faith Grant asks viewers to make is that they’ve made it this far in life without killing each other. Richie’s hot-tempered and prone to violent, possibly psychotic outbursts. Jonah’s a cheerily sneaky hanger-on and detestable, too, in a lower-key way. And Sasha, caught between them, is tired of all the bloody noses and screaming matches.

But when all three are trapped in close quarters, tensions bubble over in gruesome fashion, and the grim revelations flow like champagne. It’s all good, gory fun, the three leads bouncing off each another like energetic, morally bankrupt pinballs sent careening across a playfield.

Harpoon‘s not without its weaknesses, and Grant can’t help but to tilt the machine in places, adding later-in-the-picture twists that detract from the film’s otherwise enjoyable sense of ugly realism. Though the snarky, overarching narration comes from Fleabag‘s ever-welcome Brett Gelman, it’s still somewhat shoehorned in. And it never quite escapes the sense of being a filmmaker’s exercise, a chance to make the most of a claustrophobic setup and committed cast rather than a compelling thriller that organically invokes both.

Nevertheless, there’s enough bobbing along Harpoon‘s slick surface to distract from how little’s lurking underneath. Sometimes, a day out on the water is just the ticket.

This chilly, generic Netflix thriller starts on the simple and effective image of a car on a snowy highway, speeding toward an unknown destination. Inside the car, husband Ray (Avatar‘s Sam Worthington) and wife Joanne (Lily Rabe) are bickering about their marriage after an unpleasant Thanksgiving dinner; in the back, daughter Peri (Lucy Capri) sits and doesn’t seem to hear.

A quick pull-over at a rest stop goes awry when Peri is spooked by a stray dog and falls into a construction site, appearing to fracture her arm. The pair race her to a nearby hospital, where she and Joanne are eventually taken for a CT scan. Ray later wakes up in the waiting room, only for the doctors to tell him he came alone, that he may be concussed, and that they have no record of treating his daughter.

It’s a not-unappealing setup, with shades of Unknown and the dozen or so films that cribbed from. Plus, Anderson’s a reliably sturdy marshal of such material; from the Gothic twister Stonehearst Asylum to small-scale horror Session 9 and psychological neo-noir The Machinist, he’s known for tackling overly familiar genre tales with the kind of grim, frosty palette they warrant.

The main issue with Fractured, other than its dependance on the ability of a famously one-note star to convey emotion, is that its central mystery never grips or engrosses the way it should. That viewers are headed for a twist ending feels obvious from the first scenes, where overtures toward marital discord, addiction, and a crumbling mental state are not made so much as laid out like medical instruments on an operating table. Without the star charisma or narrative ingenuity necessary to propel its story forward, this one never lets audiences out of the waiting room.

The Best of the Rest:

Gemini Man (not reviewed; in theaters) has Will Smith fighting Will Smith; if that’s not tantalizing-enough bait for you (which… reconsider), factor in that the film’s directed by Life of Pi‘s Ang Lee, tremendously adept at imbuing his visually stylish movies with real emotional stakes, even if his more recent outings (Billy Lynn’s Long Halftime Walk) have been increasingly consumed with the pursuit of CGI wizardry.

Landing on Hulu: Missing Link, another resolute charmer from stop-motion studio Laika—behind Kubo and the Two Strings and Coraline, two of the decade’s finest feats of visual storytelling—about a sasquatch (Zack Galifianakis) endeavoring to find lost relatives. It’s a lighter, liminal entry for the outfit, not as Gothic nor as emotionally resonant as their previous films as the studio inches toward more mainstream fare, but even a lesser Laika outing is better than what half of Hollywood is making.

And if you’re looking to get in the spooky spirit, Little Monsters (also on Hulu) should do the trick. Lupita Nyong’o stars as a warm, nurturing elementary school teacher’s little prepared for a zombie invasion to arrive at her doorstep. Zombies are often less than enlivening as horror antagonists these days (a product of interminable Walking Dead seasons draining us of life force as much as their undead of intrigue) but this one channels Shaun of the Dead to wring real laughs and a bloody, beating heart (plus Nyong’o playing Taylor Swift on the ukelele) from familiar body parts.

El Camino: A Breaking Bad Movie (not reviewed) is finally on Netflix. Vince Gilligan’s long-awaited Breaking Bad follow-up, which picks up after his series finale with Jesse Pinkman (Aaron Paul) fleeing across the desert, is one of the fall’s biggest question marks: a streaming-exclusive adjoiner to one of TV’s greatest all-time series, presumably clearing up the perfect cloud of ambiguity into which Pinkman had vanished in Breaking Bad‘s closing moments. Do we need to know what happened? Probably not. But Gilligan’s last expansion of this universe was Better Call Saul, a prequel series that’s thrived as a quirky, poignant character study within its meth-cooking mothership’s shadow. We’d be foolish not to turn the page for this next chapter.

—Mindy Kaling fires back at the Television Academy—here’s why
—Rihanna explains why she turned down the Super Bowl halftime show
—Mr. Robot creator Sam Esmail on the show’s fourth and final season
—HBO’s Watchmen is an “extrapolation” of the source material
—Nick Kroll on the “meta” experience of making Big Mouth
Follow Fortune on Flipboard to stay up-to-date on the latest news and analysis.