Netflix Was ‘Creatively Attuned to Us,’ Says Martin Scorsese After ‘The Irishman’ Premiere 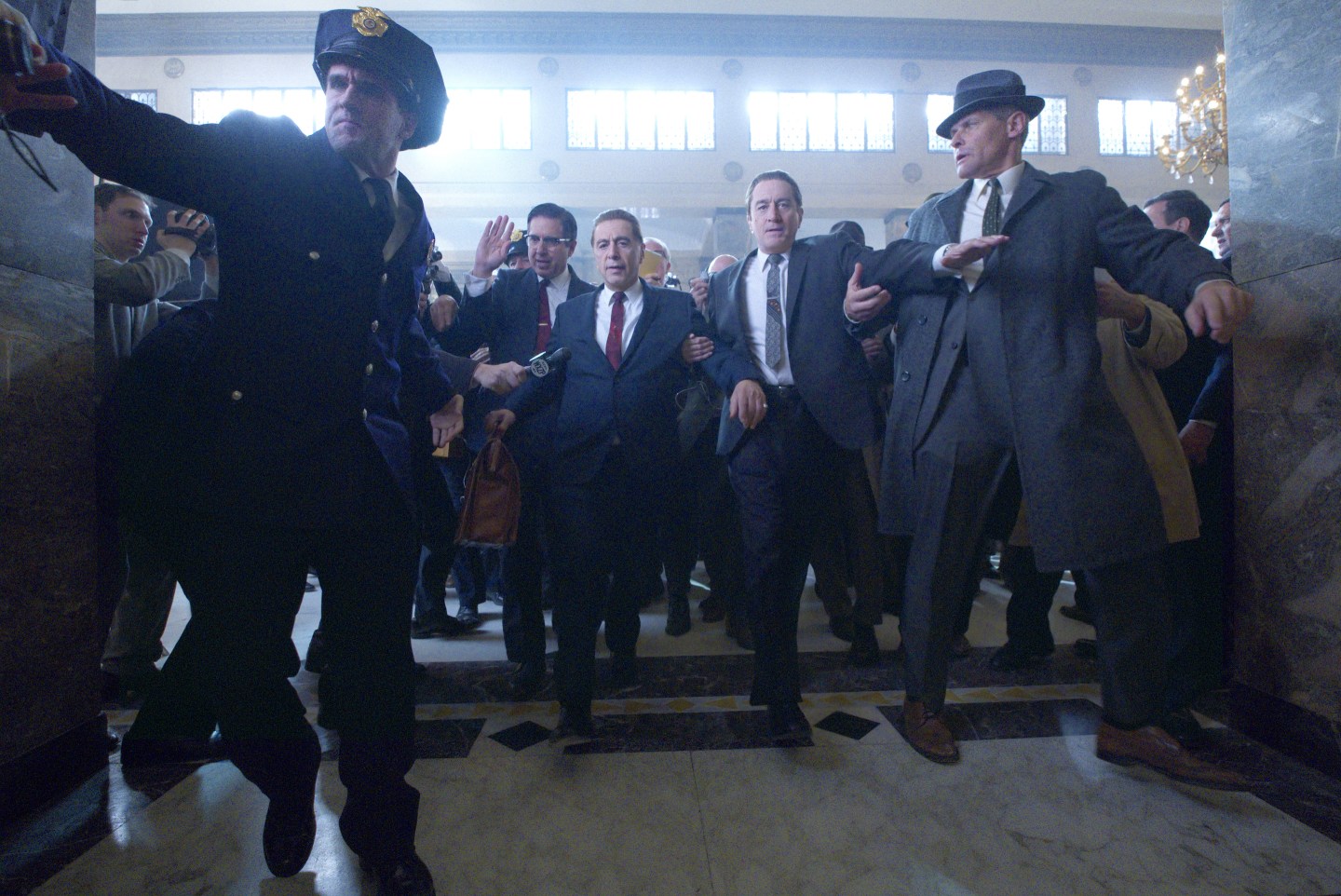 Martin Scorsese’s organized-crime opus The Irishman finally made its world premiere at the New York Film Festival on Friday.

The Netflix film, adapted from Charles Brandt’s nonfiction book I Heard You Paint Houses, charts the long, violent life of one Frank Sheeran (De Niro), a military veteran-turned-hitman who balanced responsibilities as a Teamsters official with ties to the Bufalino crime family. Throughout the ages, Sheeran intersects with countless mafiosi and public officials, forming close friendships with mob boss Russell Bufalino (Pesci) and labor leader Jimmy Hoffa (Pacino)—the latter of whom disappeared under suspicious circumstances.

“It’s the life they were in,” said Scorsese, discussing the cyclical violence and sudden brutality of life for his characters in The Irishman. “They’re human beings. [Frank’s] not a psychotic. He has feelings, and he hurts inside… There’s a moral conflict, because he’s basically a good man—yet he has to go through with it. How does a good man live with themselves after that?”

Perhaps fittingly for a mob epic spanning 50 years, The Irishman‘s path to the big screen started over a decade ago.

De Niro and Scorsese have enjoyed one of the most fruitful actor-director collaborations in American cinema history, teaming on nine feature films since 1973, when Mean Streets was released. But they hadn’t worked together since Casino (1995), and kicking around the idea of adapting Don Winslow’s thriller novel The Winter of Frankie Machine wasn’t leading anywhere concrete (The Exorcist director William Friedkin is now said to be working on an adaptation).

De Niro had been previously brought Charles Brandt’s 2004 memoir I Heard You Paint Houses, written by a former homicide investigator and prosecutor, and eventually passed the book onto Scorsese. “I could see he was very strongly attached to the character,” recalls the director. “We didn’t have to say much.”

As the pair worked to develop I Heard You Paint Houses, they struggled to secure funding for their mob epic, which require expensive de-aging effects so that the veteran actors could play their characters across decades. De Niro’s protagonist is, at his youngest, around 24, with the film following his life until he’s 80.

“We couldn’t get the backing—there was no way—for years,” recalled Scorsese. “Ultimately, it was [Netflix content chief] Ted Sarandos.” Netflix put up the $160 million budget, which no other studio at that time was willing to do. What’s more, Scorsese said the streamer allowed him to operate with few constraints.

“They were creatively attuned to us,” recalled the director. “There was no interference. There were notes at times, and we addressed them—or not.”

Production was hectic; across the 108-day shoot, recalled Tillinger Koskoff, the Irishman team shot 309 scenes in 117 locations, with sometimes two or three location moves a day. The extensive equipment, including a total of nine cameras (one of which Scorsese dubbed “a three-eyed monster”), didn’t slow them down, said Rosenthal, but it wasn’t exactly a light load for crew to carry either.

But the actors were so deeply entrenched in their characters that time flew. Pacino, especially, took to walking around set with headphones in, getting into character by listening to audio files of old speeches. “You had Jimmy Hoffa’s voice in your ear on set,” remembered Scorsese, addressing a bemused-looking Pacino. “I thought it was music!” Pacino replied, shrugging, “Why should I tell them what I’m listening to?”

In working with Netflix, Scorsese often mulled the fluctuating state of the moviegoing experience. “It was an interesting hybrid, I guess, in a way how you balance between what a film is and what is viewed at home and in a theater or both,” he said. “We are in an extraordinary time of change.”

But ultimately, Scorsese and De Niro knew The Irishman would find an audience, no matter which studio they partnered with. “When it comes down to it, ultimately,” he added, “we felt the picture had to be made. For ourselves, really.”

Though an audience member asked those on stage to comment on The Irishman‘s connection to modern politics, Scorsese largely declined to comment on any present-day parallels.

“It’s all about power,” he offered. “Power erases everything else… And, as you know, they’ll do anything to keep the power.”

—Spider-Man officially returns to the MCU
—What to watch (and skip) on Netflix and in theaters this weekend
—Building Judy Garland: How Renée Zellweger was transformed into the legend
—The Good Place creator Mike Schur on the show’s final season
—Reese Witherspoon’s book club is keeping production company Hello Sunshine on top
Follow Fortune on Flipboard to stay up-to-date on the latest news and analysis.