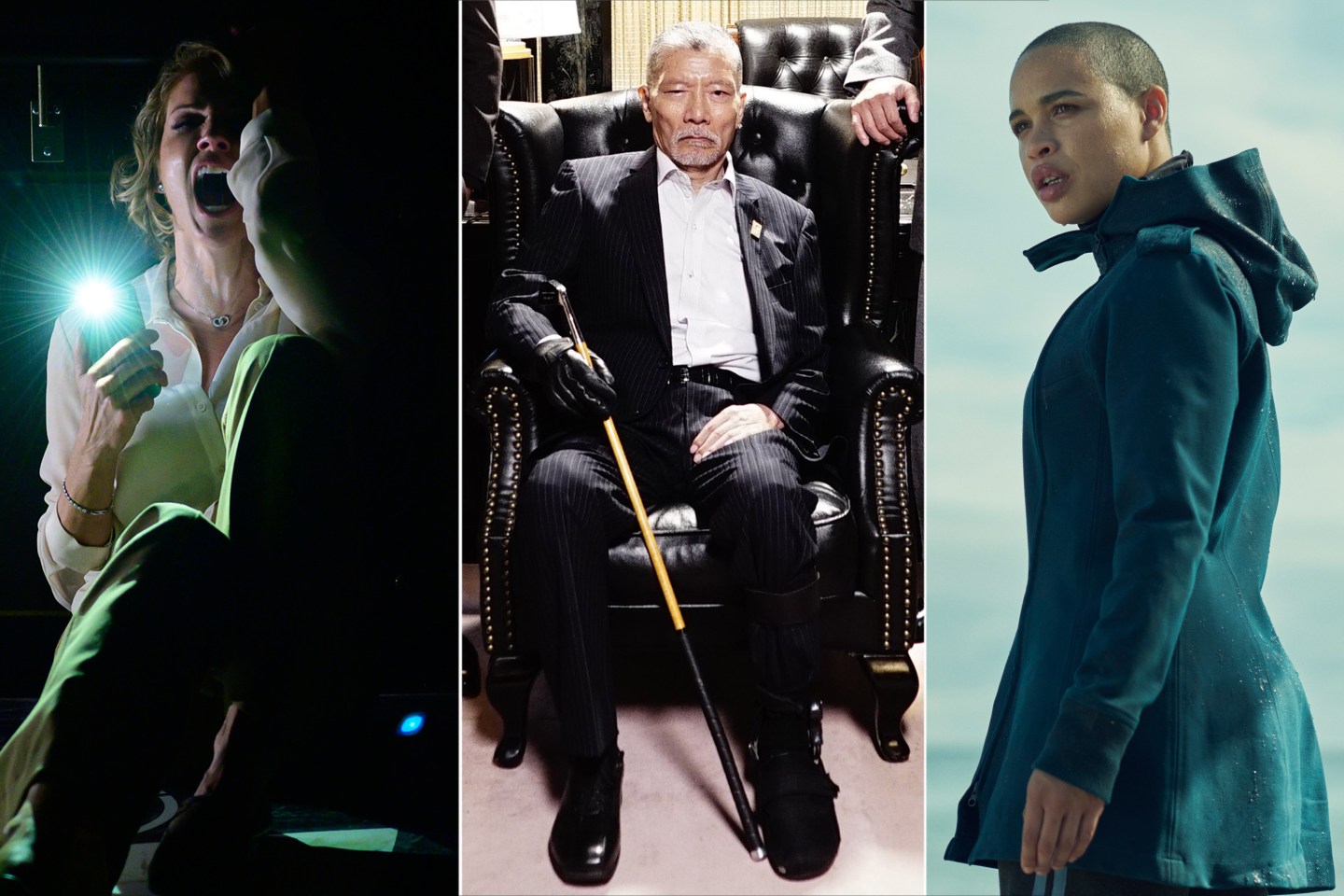 To call Takashi Miike prolific doesn’t quite cut it. First Love is the 103rd (!) film from this Japanese-cinema journeyman, and it would be noteworthy on those grounds alone. But that the film itself is such a sustained riot—a yakuza rom-com slash-em-up that positively vibrates with off-the-wall energy—signals further cause for celebration.

Blending genres is nothing new for Miike, whose eclectic tastes as a filmmaker have led him to make everything from horror-romance classics (Audition) to full-fledged children’s movies (The Great Yokai War), but his marrying of sincere, star-crossed romance to outsized gangster mayhem turns out to be a particularly inspired combination.

Teaming with his ever-reliable scribe Masara Nakamura, Miike crafts the giddily ultraviolent tale around boxer Leo (Masataka Kubota), diagnosed with a brain tumor and so listless in his daily life as to lack much reason to fight it. Enter Yuri (Sakurako Kanishi), a young woman haunted by her abusive father and on the run from pimps who’ve pressed her into sexual servitude to pay off his debts. It’s not quite love at first sight, but the two collide as if star-crossed; Leo, with little to lose, lays out the corrupt cop chasing Yuri and in doing so inadvertently becomes her protector over the course of one long night.

Miike treats the genre archetypes in play—from one-armed, shotgun-pumping assassins to vengeful, borderline-feral femme fatales—like Jenga blocks, stacking them high then knocking over the pile with an anarchist’s punky, devil-may-care spirit. First Love is gleeful about its chaos, introducing a literal murderer’s row of characters whose entrances and exits from the film are as unpredictable, entertaining, and cartoonishly violent as everything else about them. But that’s to the film’s benefit; with so many pieces in play, Miike is freed up to orchestrate one batty setpiece after another. It all culminates in a blood-soaked department store brawl for the ages, tense and hilarious, inventively gruesome and strangely moving.

Just in time for Halloween, horror-specific streaming service Shudder is launching its buzziest original series to date—and based on the episode sent out to critics in advance, it’s shaping up to be a spooky-season treat that honors its auspicious namesake.

Dusting the cobwebs off a 1982 film from masters of the macabre George A. Romero and Stephen King, this Creepshow shambles onto the scene as a horror anthology with an uncommonly serious pedigree. Greg Nicotero (The Walking Dead) took point on shepherding it to the small screen, working from stories by the likes of Joe Hill (NOS4A2), Joe Lansdale (Masters of Horror), and King himself; the six-episode first season will feature directors like David Bruckner (The Ritual), Roxanne Benjamin (Body at Brighton Rock), and Tom Savini (Tales from the Darkside).

All the talent surrounding Creepshow should make for a first season that’s, above all else, engaging. And the first episode—comprising segments based on King’s short story “Gray Matter” and Bird Box writer Josh Malerman’s story “The House of the Head”—displays a level of craft and tonal consistency that suggests more hits than misses to come (a ratio that horror fans accustomed to wildly uneven anthologies are sure to welcome).

After an intro that resuscitates The Creep from Romero and King’s original—here conjured as a ghoulish, teeth-gnashing puppet—Creepshow plunges into “Gray Matter,” a deep cut from King’s back catalog (out of his first short story collection, Night Shift). The story’s always been a fascinating transmutation of King’s own struggles with addiction; focusing on a young boy’s recounting of his grieving father’s transformation into an appetite-based monster, it’s a notoriously loaded little story, and Nicotero (directing the segment himself) plays up its body-horror elements to gruesome extremes. “The House of the Head,” the episode’s other segment, is lower-key in nature, involving a young girl’s dollhouse taking on a disturbing life of its own.

Neither segment is perfect, the former suffering from too goofy a tone and the latter failing to take its spooky setup far enough. But the pair is convincing as proof of creepy concept. Creepshow is clearly looking to channel the same kooky, playful energy of the original and the horror-stuffed EC Comics that inspired it. It just about manages that—all the while offering nascent horror writers and directors a leg up. You sense that the late Romero, especially, remembered for his commitment to low-budget, big-idea filmmaking, would whole-heartedly approve.

SKIP IT: ‘In the Shadow of the Moon’ (Netflix)

Every nine years, a serial killer strikes in Philadelphia, leaving victims with liqueified brains and unexplained puncture marks on their necks. Responding to one crime scene, cop Thomas Lockhart (Boyd Holbrook) chases down a suspect, a young woman (Cleopatra Coleman) who wears a blue hoodie and moves like a ninja—until she falls in front of a moving train, seemingly to her death.

That’s where the “sci-fi” elements of this disappointingly imitative genre mash-up come into play. Mixing sci-fi, detective, horror, and thriller clichés together into nothing worth writing home about, In the Shadow of the Moon follows Locke, as he’s known, across the decades as people start dying again, right on schedule, nine years later. Obsessively, Locke reopens the case, eventually connecting the dots together into a conspiracy involving lunar cycles, dystopian tomorrows, and Terminator-style timeline meddling. If it sounds generic, just wait for the big twist, which confirms it’s not only a knock-off but one so convinced of its own edge and import that you almost feel bad for laughing.

Jim Mickle, who directed and co-wrote (with Gregory Weidman and Geoffrey Tock), is a gifted filmmaker who’s inclined, out of love, toward pulp cinema; his 2011 Stake Land was one of the few vampire movies coming out around that time with real teeth, and his subsequent pair of genre pics—We Are What We Are and Cold in July—were both exceptional, written smartly, and done as dirty as the material called for.

But his storytelling instincts have fully abandoned him here. The dialogue is dreadfully overwritten, in both throwaway lines and more substantial hunks of exposition (most unforgivably, there’s a concluding voiceover that explains much of what happened over the preceding two hours in such a way as to make it all sound even sillier, which is saying something). Third-act twists are in ready supply, but none have real impact, because each feels less like a progression and more like a feint toward a more committal, interesting piece of work that never materializes.

Holbrook—and co-star Michael C. Hall, playing the faint, bespectacled outline of a disapproving police chief—can do much better than this kind of sloppy, direct-to-streaming effort, and it’s distinctly a displeasure to watch them wade through what essentially plays like Terminator and Zodiac grafted unevenly onto a season of True Detective. Make no mistake: in producing this kind of mid-range genre picture, Netflix is filling a void in Hollywood, and that’s cause for celebration. But In the Shadow of the Moon is so dispiriting in its banality that you can feel it fading from memory, and into the service’s grim back catalog of original clunkers, right from the outset.