Will ‘Zombieland: Double Tap’ Be a Halloween Hit 10 Years After the Original’s Release? 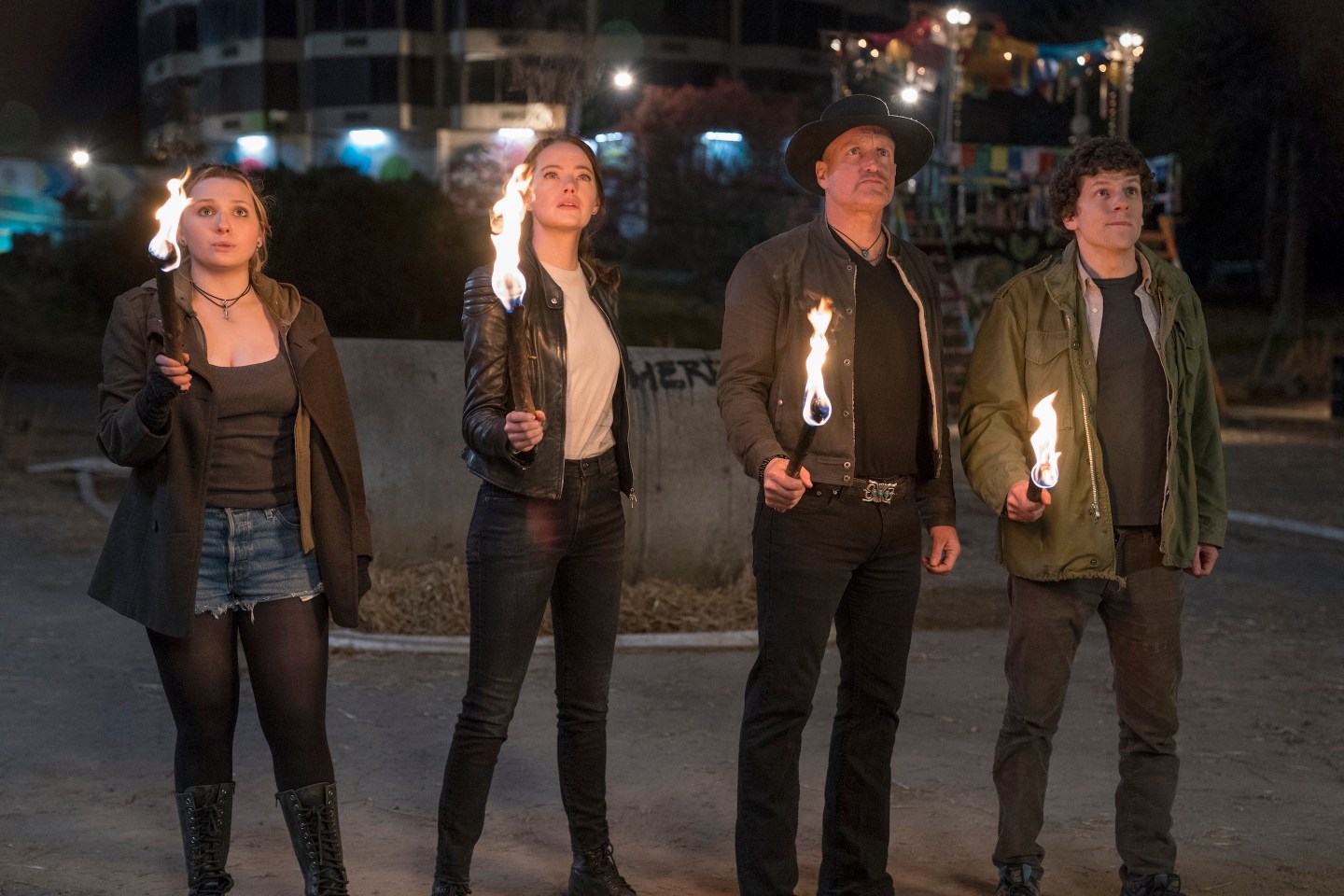 Almost exactly 10 years ago, a horror comedy movie capitalizing on the early 2000s zombie hype debuted, pulling in $75 million in ticket sales during its time in theaters. That movie was Zombieland, a cultish hit starring Emma Stone and Jesse Eisenberg, right before both young actors’ careers took off.

About a year after after Zombieland debuted, Stone took the lead in the movie Easy A, going on to win an Oscar as Best Actress for her role in La La Land in 2017. Eisenberg, meanwhile, played Mark Zuckerberg in The Social Network in 2010, kicking off a series of high profile parts that more or less left the non-serious zombie flick in the distance.

Now, both actors return in Friday’s Zombieland sequel, Zombieland: Double Tap, reprising their old characters alongside costars Woody Harrelson and Abigail Breslin—and some new faces played by Rosario Dawson, Luke Wilson, and Zoey Deutch. But how do you write a sequel to a movie that debuts a decade after the original, not to mention for actors whose public personas have drastically evolved in that time?

Furthermore, how does a pre-Halloween zombie gore comedy fit into today’s horror movie landscape, where conceptually fueled flicks like It Follows (about a terrifying STD), Jordan Peele’s Us, and Ari Aster’s Midsommar come out to critical acclaim in the spring and summer?

Zombieland writers Rhett Reese and Paul Wernick know how to write a sequel—they’ve done it before, for Deadpool—and have thoughts on how to keep one both fresh and relevant 10 years later. They spoke with Fortune about zombie fatigue and why Zombieland: Double Tap makes for the perfect Halloween movie now.

When 10 years pass between a movie and its sequel

A decade later, fans still fondly remember Zombieland. The movie’s director, Ruben Fleischer, recently told The Last Podcast on the Left that one of the questions Harrelson gets asked most about his career is, “When is Zombieland two coming out?” For an actor who’s appeared in popular franchises such as True Detective and Hunger Games, that’s not insignificant.

“You’re mostly worried about doing right by the existing fans and the people who really care about the franchise, because people tend to take ownership of the thing,” says Reese of writing Zombieland’s sequel.

He and Wernick have experience with fans taking ownership. As a creative duo, they wrote and executive produced 20th Century Fox’s Deadpool, a superhero movie based on the titular Marvel character played by Ryan Reynolds. They also wrote the sequel, Deadpool 2. Though the movies aren’t officially part of the Marvel Cinematic Universe, anything derived from popular comics is subject to strong fan opinions.

For Zombieland, however, there’s less concern over that universe’s canon and more about adhering to the original characters’ personalities.

“To have an actor’s voice in your head as you’re writing an established character…is a wonderful gift,” says Wernick. As far as zombie movies go, this one is particularly character driven. The original Zombieland ends with (spoiler alert) Eisenberg and Harrelson’s characters saving Stone and Breslin’s from a zombie-ridden theme park, after which the four officially coalesce into a sort of post-apocalyptic, happy family.

“This movie is really about a family coming together,” Wernick says of the sequel.

What about when some “family” members get more famous between movies one and two? Even in a self-aware comedy, their celebrity doesn’t affect the way Reese and Wernick write for them.

“We’re just really dialed down on character and trying to put aside what’s happened in everybody’s career,” says Reese. “It felt like getting the band back together.”

Reese and Wernick have been working together for 18 years, and have known each other “for more like 30,” Reese says. “We are very, very tight and can finish each other’s…”

The pair attended high school together in Phoenix, Ariz. and has worked on a variety of projects together. Their first collaboration was on the reality television series The Joe Schmo Show, in the early 2000s. “That really started the ball rolling for us,” says Wernick.

Since then, the two have collaborated on a children’s movie, comedies, action films, and horror flicks. “There’s kind of nothing we haven’t tried at this point,” says Reese.

“More than anything, we mix tones, and that’s our signature brand…bringing in drama and action and comedy,” says Wernick. “We’re Renaissance writers.” This makes Reese laugh, but it’s a big part of what makes Zombieland: Double Tap a viable candidate for major box office success.

Zombieland’s writers think of both the original and the sequel as “Halloween movies,” but not too scary ones. “You could go with a date or even take your kids as long as they’re not too young,” Reese says.

The first Zombieland “really played well through Halloween,” he adds. “We hope this one does, too.”

However, the timing of the movie’s release may not matter much. We live in a world where the horror genre has infiltrated the mainstream, sneaking into conceptual thrillers, art movies, high dramas, and politically charged comedies. “The genre is a year-round proposition,” The Guardian wrote in July, citing the success of hits like Midsommar, and some flops, like Child’s Play, the remake of the 1988 film about the sentient doll, Chucky, which debuted in June.

As a mildly campy blend of action, horror, and comedy, Zombieland fits snugly into the current horror movie trend while also falling into a more specific category—the zombie movie.

“I do think everything zombie-related was probably pre-Walking Dead and post-Walking Dead,” says Reese of the popular zombie series that came out in 2010. “It just made zombies an international phenomenon in a way they really hadn’t been before. We’re hoping that opens up a marketplace.”

Zombieland, and its writers, have also acquired their own sort of signature. It’s the mixing tones that Reese and Wernick talk about, along with what the latter calls “our secret sauce…which is making you feel.” “It’s a mystery as to why people like zombies as much as they do,” Reese adds. “But the bottom line is the genre’s lasted for 30 or 40 years and likely isn’t going anywhere.”

—And the 2020 Oscar for Best Picture will go to…
—Why Parasite became the film everyone’s talking about
—The best movies that came out of the 2019 New York Film Festival
—Kevin Smith isn’t done being ridiculous just yet
—Recap: Succession season two episode 10
Follow Fortune on Flipboard to stay up-to-date on the latest news and analysis.