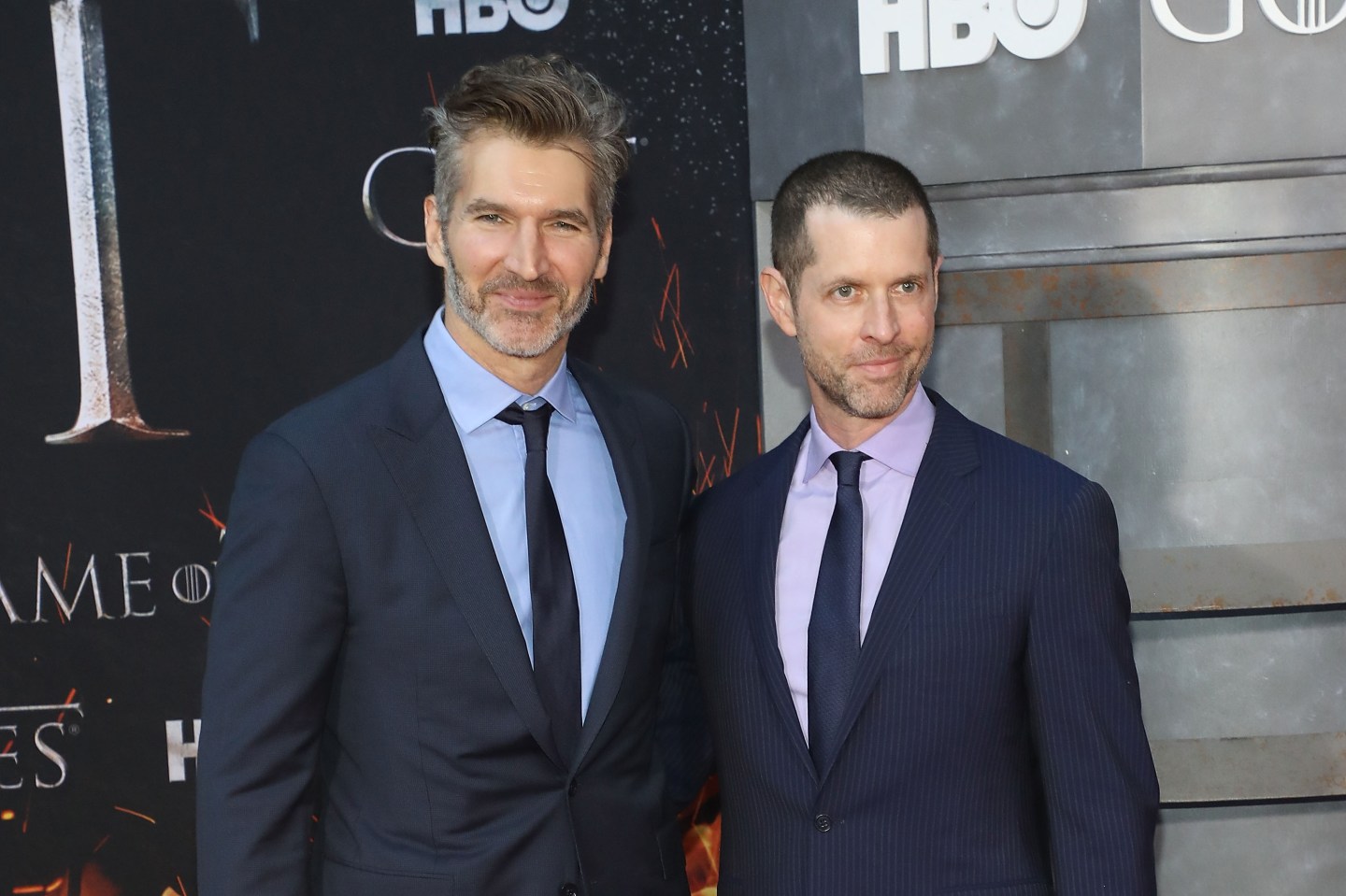 Game of Thrones co-creators David Benioff and D.B. Weiss are officially departing HBO for Netflix, becoming the latest high-profile showrunners to shift away from the basic/premium cable landscape after reaching a lucrative pact with the streamer.

“We are thrilled to welcome master storytellers David Benioff and Dan Weiss to Netflix,” said Netflix content chief Ted Sarandos in a statement Wednesday. “They are a creative force and have delighted audiences worldwide with their epic storytelling. We can’t wait to see what their imaginations will bring to our members.”

Added Benioff and Weiss: “We’ve had a beautiful run with HBO for more than a decade and we’re grateful to everyone there for always making us feel at home. Over the past few months we’ve spent many hours talking to Cindy Holland and Peter Friedlander, as well as Ted Sarandos and Scott Stuber. We remember the same shots from the same ’80s movies; we love the same books; we’re excited about the same storytelling possibilities. Netflix has built something astounding and unprecedented, and we’re honored they invited us to join them.”

At Netflix, Benioff and Weiss Join Other High-Profile Creators

According to The Hollywood Reporter, the multi-year film and TV pact Benioff and Weiss have signed with Netflix is worth at least $200 million, with others putting it as high as $300 million. That nine-figure deal is similar in size and scope to ones signed with American Horror Story juggernaut Ryan Murphy and Grey’s Anatomy powerhouse Shonda Rhimes, both of whom will be producing new projects for Netflix over the coming decade. Additionally, Black-ish creator Kenya Barris made a $100 million pact with the service last year, aimed at creating new series in the vein of his hit ABC family comedy.

Amazon Studios and Disney (through its newly owned FX Productions) were also circling Benioff and Weiss, with the former a frontunner in the race to lure the pair away from HBO. Benioff and Weiss had reportedly sought a deal larger than the $150 million pact Westworld creators Lisa Joy and Jonah Nolan made with Amazon in April (which balloons to $200 million when one factors in payouts from Warner Bros. TV to keep the pair as showrunners on Westworld for three additional seasons at HBO).

Though Amazon, no stranger to doling out massive chunks of change for original programming, had been persistent in courting Benioff and Weiss, Netflix wooed them to its side with the promise of a massive investment in their said-to-be-ambitious original programming slate.

What About Disney and Star Wars?

Some had expected Disney to further lock down the showrunners, given that the pair are already working on a new Star Wars trilogy for Disney-owned Lucasfilm. But that studio—as evidenced by its firing of Phil Lord and Chris Miller from Solo and choice to remove Colin Trevorrow from Episode IX—plays things especially safe with the culturally beloved Star Wars franchise and could be content to keep an eye on the trilogy Benioff and Weiss are already creating, writing, and producing before committing to further projects with the duo. Their heavy commitment to the Star Wars franchise does leave hanging the question of when exactly they’ll be able to turn to making Netflix series.

For Netflix, which recently posted an alarming quarter that missed projections on subscriber growth, the strategy going forward appears to be betting big on proven hitmakers while cutting its losses on more out-there projects. News of the massive $200 million pact with Benioff and Weiss comes on the heels of numerous cancellations—among the dead: animated comedy Tuca & Bertie, sci-fi brain-teaser The OA, Spike Lee’s She’s Gotta Have It, freshman horror Chambers, and rescued-from-ABC political drama Designated Survivor—and looming losses to its library.

The streaming landscape’s about to get much more crowded for Netflix, once seen as the great disruptor for its aggressive expansion into the space; with Disney launching Disney+ (and bundling with Hulu) this fall, and Apple and WarnerMedia/HBO readying their own services, the biggest hit to Netflix may be in series it’s forced to relinquish back to their original owners. Friends, The Office, Riverdale, and Pretty Little Liars are among the many deep cuts that will be made to Netflix’s streaming library in the coming year.

But doubling down on big-name creators will likely give Netflix a dramatic edge on the competition in the years ahead. Along with Benioff and Weiss, who will be tasked with plotting a Game of Thrones-sized pop culture phenomenon for Netflix, the service’s deals with Murphy, Rhimes, and Barris suggest the service seeks to reach in multiple directions at once.

With Game of Thrones on their resume, Benioff and Weiss were always going to be a hot commodity once that series finished up; and though it’s too early to tell what series they’ll bring to Netflix, the service’s past pacts suggest that Netflix’s biggest future investment is in tasking proven innovators with bringing groundbreaking watercooler hits to its library.

Murphy, Rhimes, and Barris are all known in their own right as small-screen trailblazers. Murphy resuscitated the musical comedy (Glee) and anthology horror (American Horror Story, Scream Queens) formats in his prolific years at FX Networks, and his ongoing American Crime Story franchise is one of the most awarded dramas on air today, known for its bold retelling of controversial historical events. Rhimes, from atop her Shondaland empire, has redefined the kinds of characters that can be played by women (and especially women of color) on TV, creating long-running series like Scandal, How to Get Away with Murder, and Grey’s that married improved on-screen representation to juicy, eminently bingeable melodrama. And Barris, whose Black-ish is the rare half-hour network comedy to draw sturdy ratings and rave reviews while raising the bar for diversity in its genre, is just getting started, with an implicit promise from Netflix not to stand in the way of his creative voice.

Benioff and Weiss leaving HBO behind marks the end of a fruitful decade spent with the premium cable network while slashing the duo’s future projects there. In addition to serving as showrunners and writers on Game of Thrones—HBO’s biggest hit, an Emmy-dominating fantasy epic that wound down its final season earlier this year—Benioff and Weiss had been lined up to work on a new series, Confederate, for the network.

That project was met with a firestorm of backlash for its narrative’s proposal to radically revise Civil War-era history; it was to envision an alternate timeline in which the Southern states successfully seceded from the Union, paving the way for a modern nation in which slavery remained legal. The showrunners and HBO came under fire for what was seen as a racially insensitive premise, especially coming from two showrunners who had been separately faulted for Game of Thrones’ depiction of race.

With Benioff and Weiss now out the door at HBO, that project has been near-definitively scrubbed from the network’s future plans. As for potential Game of Thrones spinoffs upcoming at HBO, Benioff and Weiss will be reportedly credited as executiv producers but not involved in any hands-on capacity.