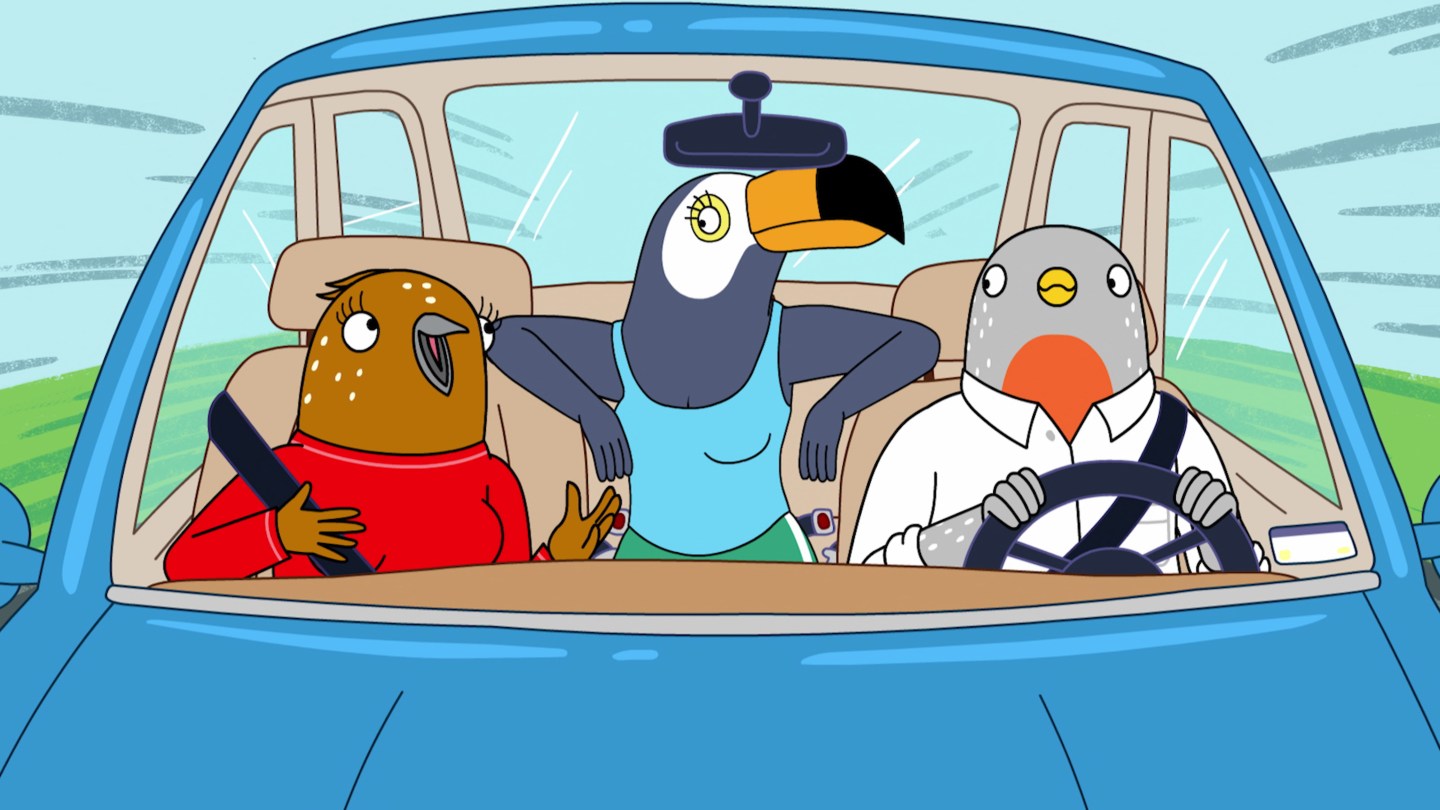 After just one season, Netflix has pulled the plug on Tuca & Bertie, its critically adored adult animated comedy, renewing calls for greater transparency surrounding how a show’s relative success or failure is gauged by the streaming service’s infamous algorithm.

The Lisa Hanawalt-directed series—built around the friendship between 30-year-old female birds, voiced by Ali Wong and Tiffany Haddish, who live in the same apartment building—had drawn acclaim for its colorful animation, unique style of surrealist comedy, and sensitive exploration of trauma and everyday ennui told from a distinctly female, non-white perspective. Notably, Tuca & Bertie featured a principal cast made up of people of color, and Hanawalt was one of relatively few female creators working in the adult animation field.

The series was of a feather with BoJack Horseman, another adult animation from The Tornante Company. Hanawalt previously worked as a production designer and producer on BoJack. That series, also a critical darling, has been readily supported by Netflix; it’s entering its sixth season on the streaming service.

“Lisa Hanawalt created a relatable yet whimsical world in Tuca & Bertie,” Netflix said in a statement. “We’re grateful to Lisa, and her fellow executive producers Raphael Bob-Waksberg, Noel Bright, Steven A. Cohen, and EPs/stars Tiffany Haddish and Ali Wong, along with all of the writers and animators for sharing the funny and dynamic female bird duo of Tuca and Bertie with the world. While Tuca & Bertie won’t have a second season, we’re proud to feature this story on Netflix for years to come.”

In a Twitter thread, Hanawalt reflected on the cancellation:

Twitter responded with anger and frustration at the cancellation. A Change.org petition aimed at saving the show from cancellation has already been launched and, within 17 hours, more than 2,000 signatures had been gathered.

“None of this makes a difference to an algorithm,” said Hanwalt in the Twitter thread while discussing the outpouring of support she’s received for the show since its launch earlier this year. That sentiment was echoed across social media, as some criticized the streaming giant for not adequately promoting Tuca & Bertie after its launch, as well as for not disclosing more information about how it assesses show performance in lieu of a more traditional ratings system.

Algorithmic feeds work to compile recommendations for viewers; at Netflix, subscribers are shown certain series based on the algorithm’s evaluation of whether they’d enjoy it, based on past viewing habits. In the case of a format-pushing adult animated series like Tuca & Bertie, with few contemporaries on Netflix save BoJack, such a distribution model naturally limits the series’ ability to attract audiences, especially those who may not have previously explored animation as a storytelling format.

Web-comics artist John Cullen, on Twitter, compared the dark side of algorithmic feeds to hiding films at a multiplex. “Imagine going to a cinema, and it turns out an interesting movie is being shown,” he wrote. “However, for some reason, there is no evidence of that movie being played – no listing, no posters –unless you specifically ask the person at the box office? That’s algorithimic feeds.”

Netflix has come under fire in the past for its treatment of critically acclaimed series from diverse creators with diverse perspectives. When One Day at a Time, focused on a Cuban-American family, was axed by Netflix four months ago (it’s since found a new home on Pop TV, following prolonged efforts by the cast, creators, and Sony to revive it elsewhere), the streaming service was roundly eviscerated across social media for canceling the series while simultaneously appearing to praise itself for airing it in the first place. Elsewhere, the stars of On My Block, a watercooler hit for Netflix, are still embroiled in a salary dispute as they seek raises for their work on the teen drama.

Notably, Netflix’s Tuca & Bertie statement sidesteps mention of the series’ considerable diversity, both behind the scenes and in terms of its content, merely calling it “relatable yet whimsical.”

Netflix did not reply to a request for comment on this story.

Still, with Netflix losing customers in the US—and some of its most-streamed content as competitive streaming services from Disney and Warner Bros. reacquire their own properties while preparing to enter the market—the streaming service appears to ditching its image as a profligate spender on original content.

Designated Survivor, a political thriller starring Kiefer Sutherland that moved from ABC to Netflix for its third season, has also been issued a pink slip; the series had gone through numerous creative shakeups over the years and had five showrunners in its Netflix-carried third year.

“We are proud to have offered fans a third season of Designated Survivor, and will continue to carry all three seasons for years to come,” Netflix said in a statement. “We’re especially thankful to star and executive producer Kiefer Sutherland, who brought passion, dedication and an unforgettable performance as President Kirkman. We’re also grateful to showrunner/executive producer Neal Bear for his guiding vision and steady hand, creator/executive producer David Guggenheim and EPs Mark Gordon, Suzan Bymel, Simon Kinberg, Aditya Sood and Peter Noah along with the cast and crew who crafted a compelling and satisfying final season.”

Netflix content chief Ted Sarandos reportedly met with high-level executives in June to advise caution in greenlighting pricey projects going forward; according to insider tech-news site The Information, Sarandos cited pricey drama-thriller Triple Frontier, which ended up costing Netflix a way-over-budget $115 million, as an example of a project that would no longer constitute an easy greenlight for the company.

Tuca & Bertie, in contrast, likely carried a much-lower price tag while also garnering some awards buzz for Netflix, which has increasingly invested in the animation space by launching its own animation studio. As former Cartoon Network animation executive Katie Krentz told The Hollywood Reporter last October, five animated shows can be made for the cost of a single live-action drama. A rookie animated series like Tuca & Bertie, in particular, most certainly lacked the mounting salary costs that often stem from keeping the cast and creators of a successful, long-running animated series content.

Netflix, as noted by The Hollywood Reporter, evaluates renewals by stacking costs against viewing figures. If a show reaches a small audience but costs relatively little to make, it can typically live to see another day. That’s not the case with Tuca & Bertie, evidently; that Tornante, its producer, saw its animators successfully unionize last month after a prolonged struggle to do so raises additional eyebrows as to what factors may have contributed to Netflix’s decision.

High-profile proponents of Tuca & Bertie included screenwriter Jonny Sun. “Cancelling Tuca & Bertie feels like an enormous step backwards in every direction,” he wrote. “The show is so funny and so tender and so necessary.”

Comics artist Kate Beaton also dissed Netflix for axing the series, calling Hanawalt’s thread gracious but adding: “I am not gracious, and cancelling Tuca & Bertie is complete bullshit! That show was universally applauded, it was original and singular and inspiring for all it brought to the table.”

—Will Tarantino’s Once Upon a Time in Hollywood? live up to the hype at the box office?

—Netflix isn’t in trouble without Friends. It just needs to work harder