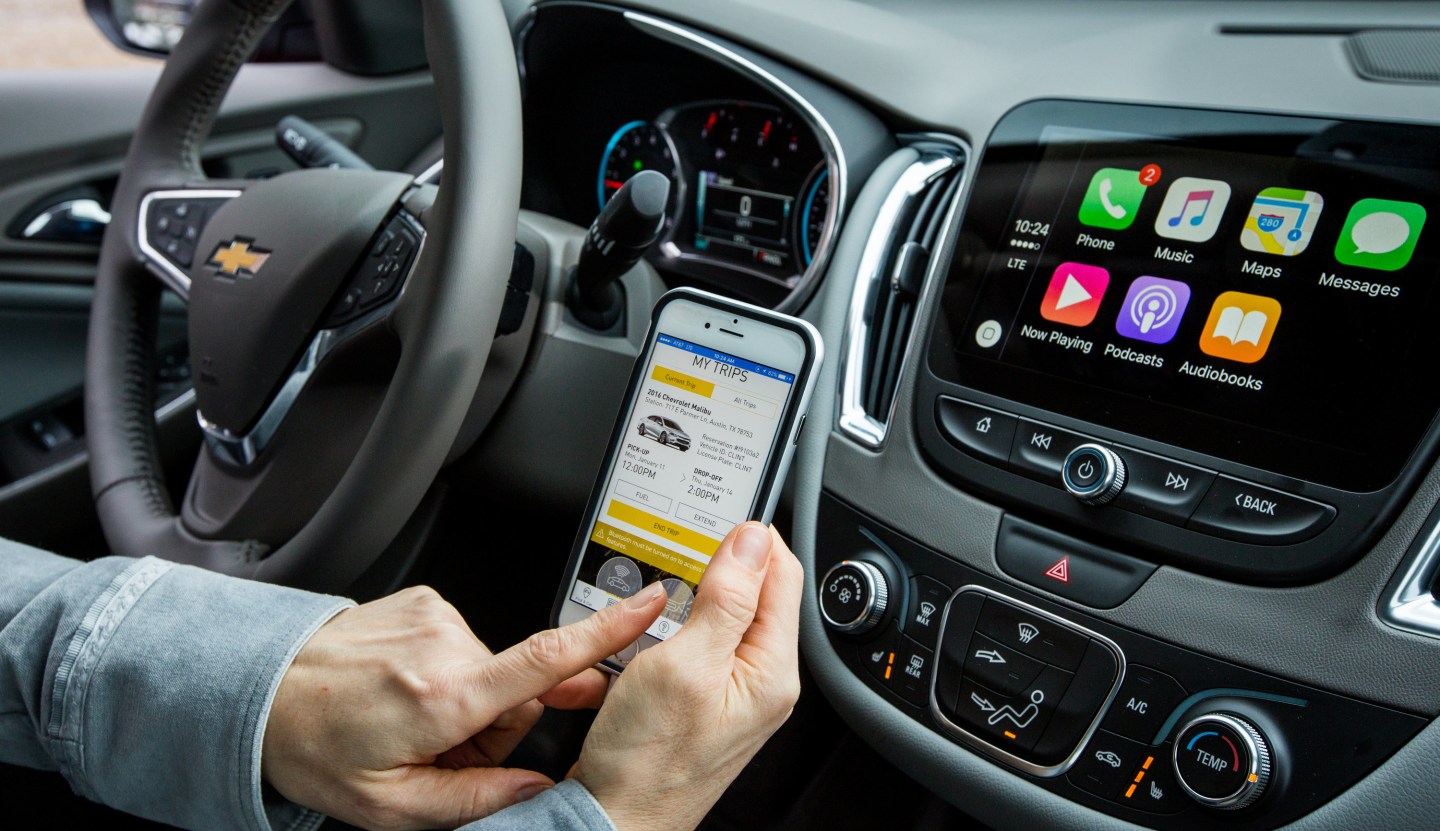 Maven customers will experience seamless smartphone and keyless integration with the vehicle. Maven customers use its app to search for and reserve a vehicle by location or car type and unlock the vehicle with their smartphone. The app also enables remote functions such as starting, heating or cooling and more. Customers can bring their digital lives into the vehicle through Apple CarPlay, Android Auto, OnStar, SiriusXM radio and 4GLTE wireless. (Photo by John F. Martin for General Motors)
John F. Martin for General Motors

General Motors has introduced a car-sharing service, joining a growing list of major automakers pushing into new businesses to attract customers who don’t own vehicles.

Last year, automakers sold a record 17.5 million cars and light trucks in the U.S. Despite the rosy sales figures, major automakers such as Daimler, Ford (F), and General Motors (GM) are looking for new ways to earn money beyond their traditional businesses of making, selling, financing, and servicing cars.

Over the past six months, GM has announced several initiatives that highlight its interest in unconventional transportation popularized by a new wave of startups, including its recent partnership and $500 million investment in ride-hailing startup Lyft. Eventually, GM wants to develop a network of self-driving cars within Lyft’s service that can shuttle passengers around town without a driver.

Earlier this week, GM purchased the remaining assets and technology of the now defunct ride-hailing startup Sidecar. Twenty of Sidecar’s employees are joining GM, including the company’s co-founder and chief technology officer, Jahan Khanna—but not co-founder and CEO Sunil Paul.

Until today, most of GM’s efforts could be categorized as tinkering and testing. Maven marks the company’s decision to move from experimenting to creating a commercial business.

“We think today there’s 5 or 6 million people globally that are already using a sharing-based model for transportation and we see that growing four or fivefold just between now and the end of the decade,” GM President Dan Ammann said during a press conference earlier Wednesday. “This is clearly an area where we see very significant growth.”

For more on GM’s plans to do more than sell cars:

How Maven Will Work

A smartphone app is central to Maven’s car-sharing business. The app can be used to search for and reserve a vehicle, unlock the door, and remotely start, cool, or heat the car. Every GM vehicle will be equipped with Apple CarPlay and Android Auto, a software platform that lets users to integrate their smartphone and with a vehicle’s dashboard. The cars will also have GM’s in-car communication system OnStar, SiriusXM radio, and 4G LTE wireless.

The city-based program will start small with only 21 vehicles in Ann Arbor, Mich. Although available to anyone living in the city, it will initially target faculty and students at the University of Michigan. For $6 an hour, a Maven customer can rent a Chevy Spark or the plug-in electric hybrid Chevy Volt to do shopping and see friends. A Chevy Malibu will cost $12 an hour while the larger Chevy Tahoe will cost $12 an hour. For now, user will have pickup and return the GM vehicles at a designated parking area.

Maven will not charge a membership fee, and its prices are cheaper than many of its competitors. For example, Daimler’s car-sharing service, car2go, charges 41 cents a minute or $14.99 an hour along with a one-time $35 sign-up fee.

However, Maven’s lower prices will likely change. Julia Steyn, GM’s head of urban mobility, told Fortune in an interview Wednesday that prices will vary by city and service. “It really depends on markets dynamics and the size of the car,” she said. Maven will eventually add the new all-electric Chevy Bolt, which will go into production later this year, she said.

Maven is also expanding a car-sharing test that premiered last year in New York for apartment dwellers. The program, previously called Let’s Drive NYC, will give residents living in Stonehenge Partners properties on-demand access to vehicles and preferred parking options. A similar residential program will launch in the first quarter of 2016 in Chicago in partnership with Magellan Development Group. By the end of the year, both services will be available to 5,000 residents, according to Steyn. The residential program will charge $9 an hour for a vehicle.

GM says it will also continue to test other transportation services at the company’s campuses in the U.S., Germany, and China.

Car-sharing is becoming a crowded marketplace with automakers and startup companies like Getaround, Turo, and Silvercar vying for customers. Audi, BMW, Ford, and Daimler (DAI) are either testing out car-sharing or operating commercial services. Daimler’s car2go, which has more than 1 million registered members and operates in 29 cities globally, is one of the largest.

Last year, Audi debuted a concierge-style car-sharing service in San Francisco geared to the luxury market as well as a pilot program in Miami that makes vehicles available to residents of luxury condominium developments. DriveNow, a car-sharing joint venture between BMW and Sixt SE operates in several German cities as well Vienna and London. The company suspended service in San Francisco, the only U.S. city it was operating in, due to difficulties with parking. And Ford is testing a car-sharing service in London called GoDrive.