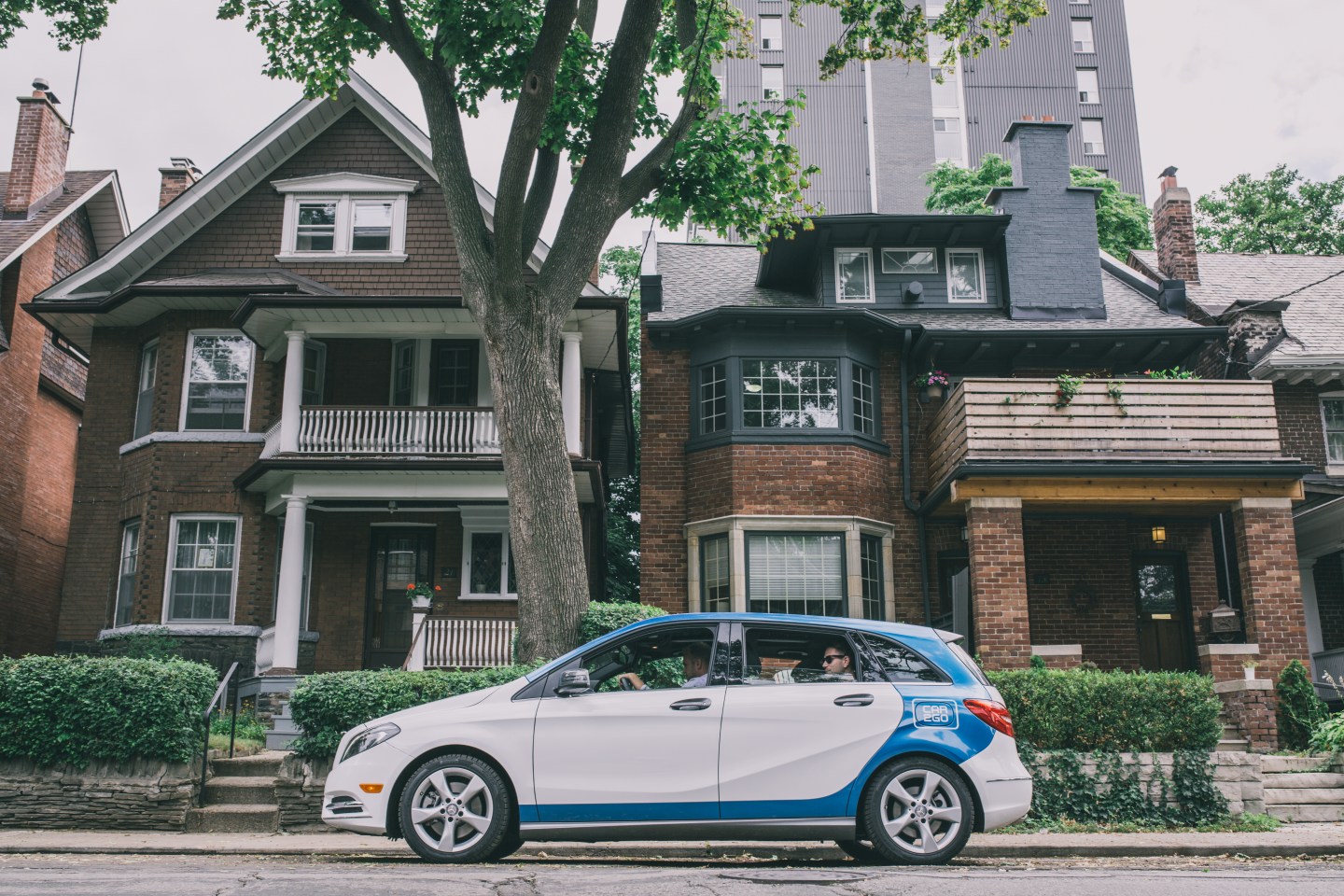 Car-sharing service car2go is injecting a little luxe into its lineup. The Daimler-owned company, which has more than 1 million registered members in 29 cities globally, is adding 75 four-door Mercedes-Benz B-class vehicles to its fleet in Calgary, Toronto, and Vancouver.

The pilot program, which launched Monday, will offer members an alternative to the car-sharing company’s signature vehicle: the diminutive two-door Smart Fortwo vehicle.

“People think we’re a Smart (car) brand, and we’re not,” CEO Paul DeLong told Fortune. “We hope to get some good data from the pilot. We want to see if behaviors change, determine whether a four-door car is really what people want, and if it will change the way people move.”

The company’s connection to Daimler (DDAIY) and the Mercedes brand has been invisible until now—at least to the casual observer. The addition of Mercedes models to the car2go fleet might seem minor; however, it does increase the car2go’s visibility. And it shows the company is interested in expanding and evolving.

Car2go has plans to expand into other markets—its latest was 200 vehicles in Arlington, Va.—and improve its technology. By the end of 2015, the company will complete a major technology upgrade that will shift the entire login, ordering, and payment process from the head units currently installed in the car2go fleet to a mobile app. These new car2go vehicles will also include Bluetooth, charging cables, and enhanced GPS navigation so members can play their own music and charge their phone while navigating to their destination.

The new technology was introduced in Vancouver in August and will roll out to all locations in 2016, DeLong says.

Members can locate a car2go vehicle through a smartphone app or website, or by contacting the customer call center. When members are finished with their vehicle they can park it at any city un-metered space or residential neighborhood within the designated “home area.” Parking, fuel, insurance, and maintenance are included at no additional cost. Members can use the service by the minute and pay only for the time they use the vehicle, with discounted rates for hourly and daily use. No annual or monthly fees are required.

A fleet of self-driving cars

For now, the company is focused on making it easier for members to find, order, and use their vehicles, says DeLong. But eventually, DeLong sees a time when this car-sharing service could encompass self-driving vehicles.

“We’re a Daimler company and we’re able to work with the different departments on how to make this further step in car-sharing,” DeLong says. “There will be a day when people open up their app, like they open up an app for car2go, and the vehicle will show up to them, instead of trying to find a vehicle or trying to park a vehicle.”

DeLong believes car2go is in a better position than its competitors because it can tap into the resources of its parent company, which manufactures cars. For example, a team at Mercedes is working on autonomous driving out of its Sunnyvale, Calif., research and development center, DeLong says. Meanwhile, data collected by car2go has helped it learn how people move in and around cities—an important insight for any company hoping to deploy autonomous driving.

There is no timeline for a self-driving car, or a fleet of them, DeLong says. “But I wouldn’t mention it if we weren’t serious about it,” he says. “Self-driving cars opens up a lot of opportunity with car-sharing.”