Did Tesla’s Autopilot claims cross the line? We should finally find out this year 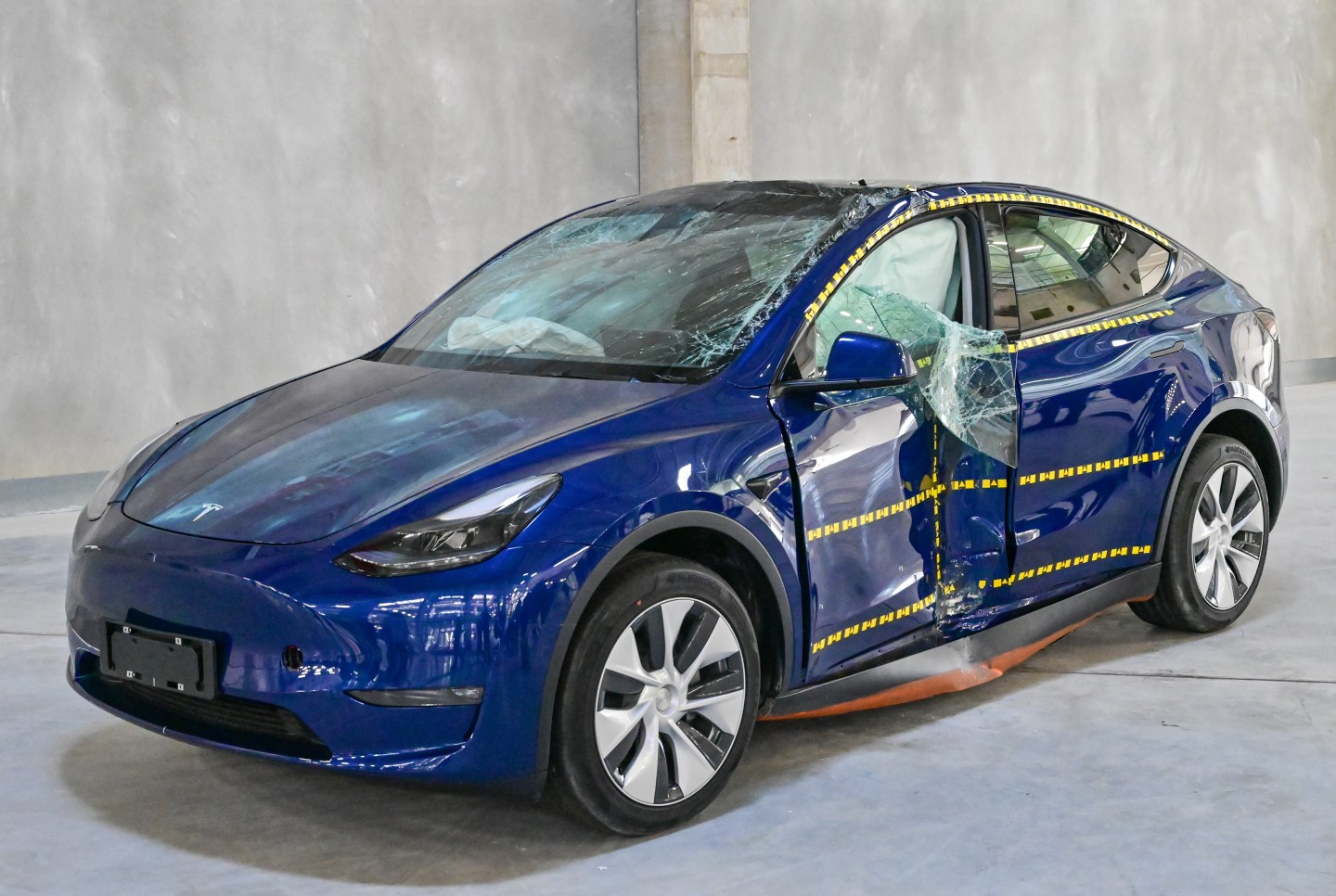 Before jumping into today’s Data Sheet, I wanted to highlight news that Microsoft announced plans to cut 10,000 jobs, or roughly 5% of its workforce, joining the ever-growing list of tech giants right-sizing their headcount.

At this point, there’s not much new to say: Companies over-hired in the throes of the pandemic, they now want to cut costs in the face of an uncertain economy, and the whole thing stinks for everyone involved. Let’s just hope we’re nearing the end of the worst of it.

Now onto the rest of Data Sheet.

A little over six years ago, Tesla released and heavily promoted a video that suggested the company’s cars had reached long-awaited autonomy.

The nearly four-minute reel kicked off with a message, foretelling footage of a car “driving itself.” Then, viewers saw a bird’s eye view of a self-driving Tesla flawlessly navigating side streets, a highway, and a parking lot as the Rolling Stones’ “Paint It, Black” played in the background. Although a man sat in the front seat of the vehicle, he never took control of the steering wheel, let alone put his hands at 10-and-2.

The video heralded the arrival of a landmark achievement by Tesla, with CEO Elon Musk tweeting that “Tesla drives itself (no human input at all) thru urban streets to highway to streets, then finds a parking spot.”

But according to testimony last year by a high-ranking Tesla executive, unearthed Tuesday by Reuters, the ad was misleading at best. In a July 2022 deposition, Tesla Autopilot software director Ashok Elluswamy said the car made mistakes and crashed into a fence on test runs along the path ultimately depicted in the video. Tesla and Musk never mentioned these foibles in the promotional video or public comments.

“The intent of the video was not to accurately portray what was available for customers in 2016,” Elluswamy said at the deposition. “It was to portray what was possible to build into the system.”

The video crystallized what has now become a common complaint about Tesla and self-driving: that Musk and other company executives exaggerated the company’s technical capabilities and withheld information that would have dampened enthusiasm about the technology.

For years, Tesla has largely avoided any legal repercussions for its actions. But 2023 should prove a watershed year in determining whether Tesla’s deeds amounted to legally protected speech, careless embellishment, violations of civil and criminal law, or something in between.

On the civil court side, Tesla is expected in February or March to face its first trial seeking to hold the company liable for the performance of its self-driving technology, dubbed Autopilot by the company, leading up to a fatal crash.

The case stems from a deadly collision in Florida involving a Tesla Model 3 driven by 50-year-old Jeremy Banner, who slammed into a tractor-trailer while Autopilot was engaged. Crash investigators faulted Banner for inattention while driving, though federal officials said Autopilot failed to warn Banner about an imminent danger.

Should the two sides spurn a settlement and take the case to trial, a verdict would test whether jurors believe Tesla’s marketing gave drivers a false sense of security on the road. A trial also could expose previously undisclosed information held by Tesla about its self-driving technology capabilities and the ethics of its advertising.

“A big part of the significance of the case is that it actually is being conducted in a public forum,” Michael Brooks, then-chief counsel at the Center for Auto Safety, a consumer advocacy group, told Bloomberg in September.

Another Autopilot-related trial related to a fatal crash is tentatively scheduled for late March. The family of Walter Huang alleges that Tesla’s self-driving technology was fundamentally unsafe at the time of the 38-year-old’s single-car crash in Mountain View, Calif. Federal investigators said Huang’s Tesla did not detect his hands on the wheel at impact, and cellular data suggests he might have been playing a game on his iPhone. (Elluswamy’s testimony about the 2016 Tesla video came during a deposition related to the Huang family’s lawsuit.)

On the criminal front, Tesla and its executives should learn more this year about a criminal probe opened in 2021 by the U.S. Department of Justice. Reuters, citing sources familiar with the matter, reported that the investigators are examining whether Tesla officials “misled consumers, investors and regulators by making unsupported claims about its driver assistance technology’s capabilities.” The inquiry followed a dozen-plus crashes, some of them fatal, in which Autopilot was engaged.

Finally, regulatory inquiries launched by federal highway safety officials and the California Department of Motor Vehicles should kick into overdrive this year. Both sides are reviewing the safety of Tesla’s Autopilot-equipped cars, with California officials taking a particular look at whether the electric automaker engaged in false advertising related to self-driving technology. While it’s unclear whether either probe will result in regulatory action in 2023, both inquiries could produce new information released through legal filings or media leaks.

Tesla officials have steadfastly maintained that drivers are responsible for remaining attentive while Autopilot is engaged, generally absolving them of legal culpability when crashes occur.  A splendid New York Times Magazine article published Tuesday examined this argument, as well as Tesla’s ethical approach to balancing the short-term risks and long-term benefits of putting Autopilot on the road.

After years of public debate over whether Tesla’s approach is well-founded or facile, the legal system might finally provide an answer soon.

A correction of note to yesterday’s Data Sheet. I accidentally wrote that Google spent more than $500 billion to acquire DeepMind. That obviously should have been $500 million. My apologies for the error, and thanks to readers who quickly noted the mistake.

Still in recovery mode. Lawyers for disgraced cryptocurrency exchange FTX said the company has recovered about $5.5 billion in liquid assets while navigating a bankruptcy filing initiated in November. The property includes about $1.7 billion in cash, $3.5 billion in digital assets, $300 million in securities, and $426 million seized by the Bahamian government. FTX officials have not released an exact amount of assets owed to customers and other debtors, but the company’s 50 largest debtors are due nearly $3.1 billion.

Twitter’s feeling blue. A top Twitter executive told employees Tuesday that the company’s revenue is down 40% year over year, a decline driven by more than 500 high-value advertisers pausing their spending on the platform after Elon Musk’s takeover of the company, The Information reported. The comments by Siddharth Rao, an engineering manager deeply involved in Twitter’s ad business, illustrated the scope of Musk’s revenue troubles following his $44 billion acquisition in October. Twitter, which reported $1.2 billion in first-quarter revenue in 2022, was not profitable prior to Musk’s purchase.

Making more Robux. Shares of video game outfit Roblox jumped Tuesday after the company released better-than-expected revenue estimates for December 2022, CNBC reported. Roblox’s stock rose 11% Tuesday in response to a report showing revenues were up 17% to 20% year over year in December, a rare bright spot in the struggling video game sector. Roblox shares gave back some of those gains Wednesday, slipping 4% in midday trading, though the company’s stock is still up 28% since the start of January.

Elon on trial. Federal jurors were seated Tuesday in the civil class-action case against Tesla CEO Elon Musk, who is accused of cheating investors by making false statements about taking the electric automaker private in 2018. The trial begins Wednesday, with the plaintiffs’ attorneys arguing that Musk manipulated Tesla’s stock price by declaring that he had secured the financing needed to take Tesla private. Tesla shares spiked following the tweet, which Musk has defended as truthful, but later sank once it became clear that no deal was imminent.

A crypto comeback? For the second straight day, let’s use this space to focus on a distressed asset quietly regaining some value. As CoinDesk reported Wednesday, the price of Bitcoin has rebounded to pre-FTX collapse levels, briefly eclipsing $21,500 this week, as the dust settles on a calamitous last year for crypto. The gains follow a stabilizing of crypto markets and a slowdown in inflation, renewing some consumer confidence in digital assets. Bitcoin prices have hovered near $17,000 since FTX crumbled in November, and they’re still far off the $60,000-plus mark reached at their November 2021 peak.

Behind today's advance were this morning's larger than expected decline in the producer price index (PPI) for December combined with a bigger than forecast drop in December retail sales.

Goldman Sachs and Amazon layoffs make the economy seem doom and gloom. The reality is much brighter, by Megan Leonhardt

Bob Chapek’s severance package from Disney will fetch him $20 million, by Chris Morris

The great Tesla price war is here and it could be either the sign of a looming catastrophe or a bold bet on growth, by Dana Hull and Bloomberg

A closer look at the A.I. apps taking over social media, by John Kell

A Roomba photographed a woman on the toilet and it ended up on social media. Now A.I. experts have this warning about bringing tech into your home, by Eleanor Pringle

In 2011, we made the Nest thermostat. Now we’re coming for your banana peels to help save the planet, by Harry Tannenbaum and Matt Rogers

Fixin’ to ban TikTok. The TikTok security wars are going to college. Texas A&M University and the University of Texas at Austin became two of the largest higher education institutions to ban the use of TikTok on campus wireless systems this week, joining a growing list of colleges blocking the social media app, the Washington Post reported. The Texas universities acted in response to Gov. Greg Abbott ordering state agencies to ban TikTok on government-issued devices. Abbott cited concerns about TikTok’s Chinese owners, ByteDance, harvesting user data and sharing the information with the Chinese government. TikTok is deep into negotiations with U.S. officials about plans to address security-related matters raised by American policymakers, though those discussions are dragging on longer than company executives anticipated.