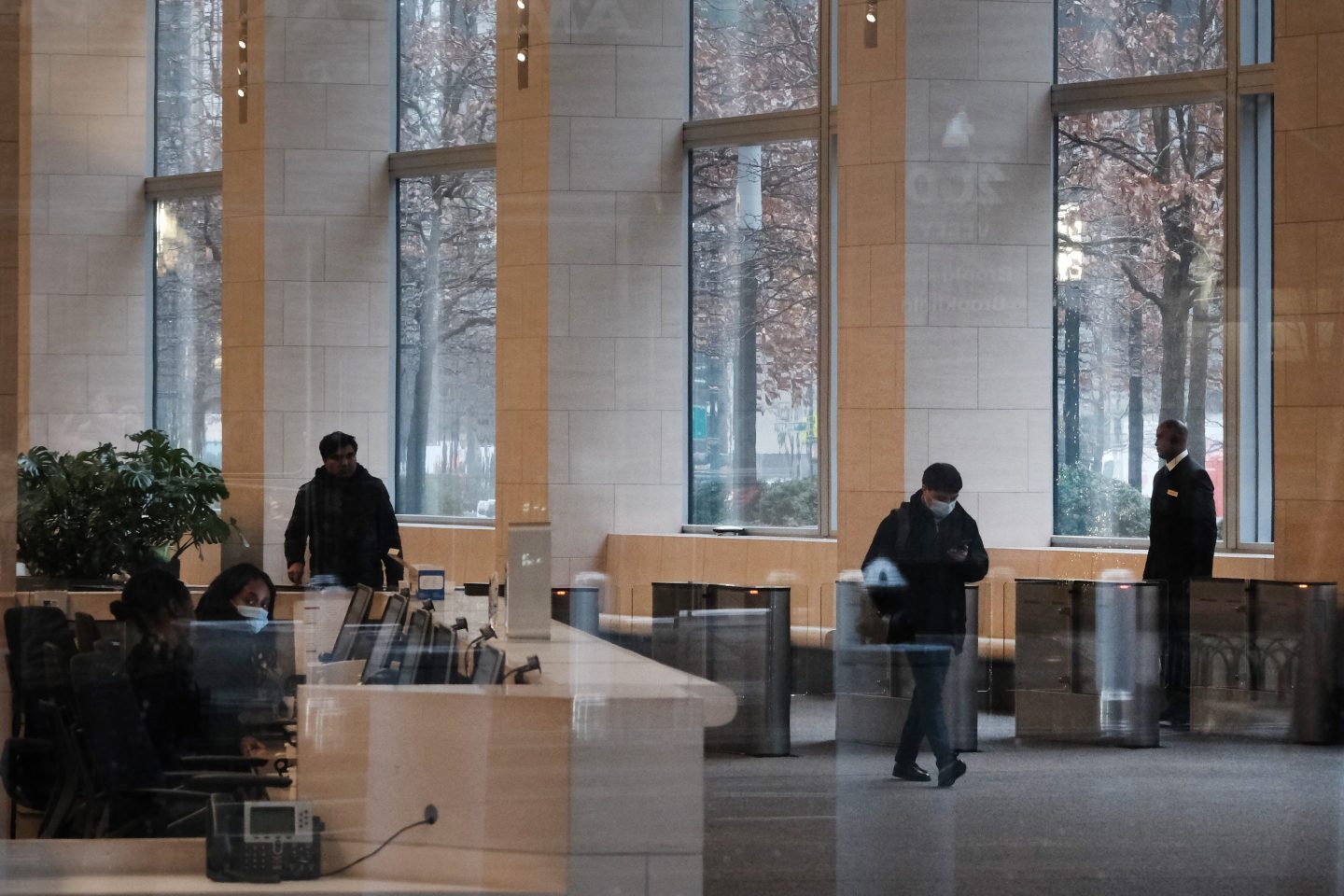 People walk through the lobby of the Goldman Sachs headquarters, where free drip coffee is ending.
Spencer Platt—Getty Images

Say hello to a lot of tired Goldman Sachs employees. Because instead of immediately letting go of Joe from sales, the investment bank is getting rid of its free cup of joe.

A disgruntled employee recounted to the New York Post that when they went for their drip coffee in the office’s “Sky Lobby,” they were instead greeted with a different type of wake up call: ”a sign and a woman yelling at us that it was no longer complimentary.” They said they forked up $2.99 for a “sh–ty cup of Seattle’s Best.”

“Nothing says ‘Happy New Year’ like ‘You’re already on the verge of losing your jobs—but let’s just make sure you lose your free coffee, too,” they added, referring to Chief Executive Officer David Solomon’s warning that the bank could begin layoffs in the first half of January.

In his end-of-year message, Solomon spoke of a “headcount reduction” in response to many factors, including “tightening monetary conditions that are slowing down economic activity.” As much as 8% of the company’s workforce, or 4,000 workers, could potentially be affected.

It seems that coffee, too, is on the chopping block, although Goldman spokesperson Abbey Collins notes to Fortune that “there is free coffee available to all employees on every floor—from drip coffee to espresso drinks.” Barista-style coffee machines were installed in every pantry in the building in 2022, but employees complained to the Post they’re often broken or don’t produce tasty coffee.

At the start of the pandemic, Wall Street seemed to be a different beast from its famously stressful culture, looking more like a lamb than a bull as financiers transitioned to Zoom meetings. But big names like Goldman Sachs seem to be done with the era of increased flexibility. Famously anti-remote work, Solomon ushered employees back starting last March; the office has since nearly reached pre-pandemic levels of occupancy. During the Omicron resurgence, Solomon told Fortune that the key to Goldman’s success was in part down to young and more senior workers coming together and collaborating in-person.

He’s also slowly been rolling back pandemic perks: Free daily car rides, a free coffee cart in the lobby, and breakfast and lunch service all went away last year. The drip coffee, implemented during the pandemic, is just the latest pandemic perk he pulled back. Some workers previously pointed out that the disappearance of these perks would mostly affect entry-level employees, as higher-ups could often still afford or be gifted nice lunches or coffee.

Goldman isn’t the only major financial player ending its freebie era. Morgan Stanley took away free tickets to the U.S. Open tennis championship last year, a pre-pandemic perk that was once available to top performers at the bank. JP Morgan also ended their free sports tickets.

Over in tech, Meta suspended its laundry service last March, before ending the year with layoffs. And Google CEO Sundar Pinchai said he was “simplifying the company” and that “we shouldn’t always equate fun with money” as he reeled in extra spending. TikTok, too, ended its daily meal stipend for employees based outside of its hubs. While none of this means that layoffs are for sure coming, the tightening of wallets isn’t always a promising sign for these sectors that are swinging back from their early pandemic boom.

It’s shifting culture in major industries. In finance, a group of Goldman junior bankers may have spoken out against the crushing workload nearly two years ago, but Wells Fargo bank analyst Mike Mayo told Fortune in July a potential recession might weaken the power of finance employees. “This is a time to treat Wall Street the way it was treated for generations,” he said.

“If you’re an employee of Wall Street, you better have your eyes wide open,” he added. But that might be hard to do if they’re caffeine-deprived.