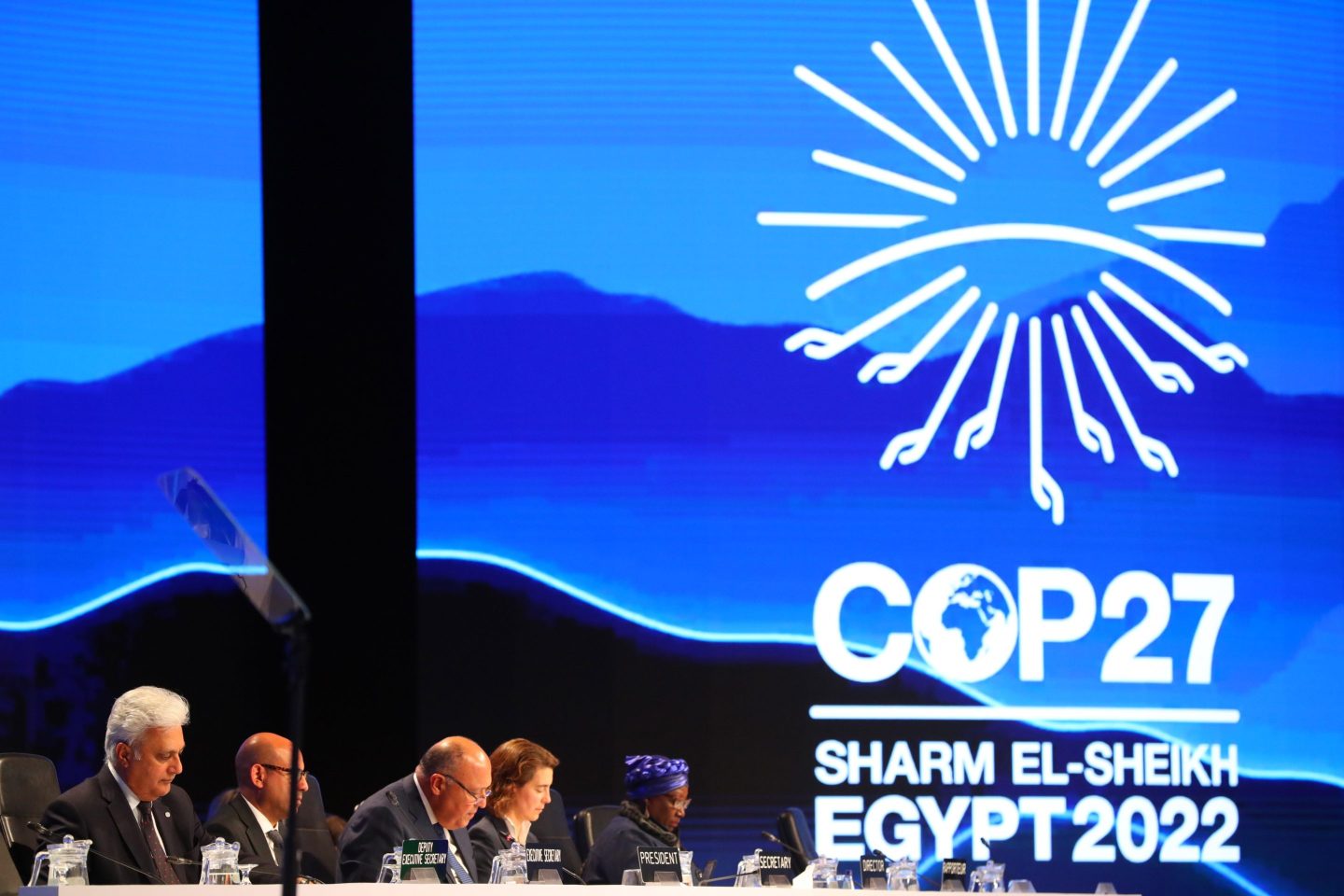 Depending upon who you ask, COP27, the latest annual global summit on climate change that ended Saturday after a final all-night negotiation session, was either a disappointing failure or an unprecedented success.

The marathon negotiations yielded one victory: richer nations finally agreed to establish a fund to compensate poorer countries for losses due to climate change, an action developing nations had been pushing for for 30 years. But the annual summit failed to advance global ambitions to curtail carbon emissions.

“Parties failed to increase national ambition (agreed at COP 26) and little was done to close the policy gap. So the goal of limiting global average temperatures to 1.5°C by 2100 remains, but it is very unlikely given emissions must fall 45% by 2030 but are set to rise 11%,” Boston Consulting Group says in its post-COP 27 report.

Last year’s plan to “phase down” unabated coal projects remains in place, but the final agreement out of COP27 doesn’t extend the ambition to all fossil fuels this year. Campaigners have blamed the high number of fossil fuel lobbyists attending COP 27—including BP CEO Bernard Looney, who attended as a delegate for Mauritania—for hamstringing negotiations on scaling back oil and gas.

While action on mitigating climate change has stalled, BCG global head for sustainable investing Vinay Shandal, who was at the summit in Egypt, came away encouraged by the emerging conversation around climate adaptation, which he says was more prevalent at COP 27 than in previous years.

“For a long time there was a vibe of ‘don’t talk to me about adaptation’ because focusing on adaptation is an implicit acknowledgement that we might actually suffer harm from climate change,” Shandal says, calling that fear a “Western-centric” view. ”The reality is, especially for developing economies, climate change is already here.”

At the world’s current pace of decarbonization, as set by national goals to cut carbon emissions, the average global temperature will rise between 2.2°C and 3.4°C by 2100—well over the Paris Agreement’s goal of limiting warming to “well below” 2°C.

An increase in the devastating effects of climate change, including drought, floods and extreme heat, is already locked in, making adaptation key. The world needs $140 billion to $300 billion in annual climate adaptation investment, BCG says, to finance tech such as early flood warning systems or drought resistant crops. According to BCG, the private sector in particular has significant room for scaling up investment after contributing just 2% of total adaptation and resilience financing in 2020.

But Shandal says he’s hopeful about the future of climate adaptation based on what he saw on the ground at COP 27, where industry leaders were laying the foundation for how to attract investors into supporting adaptation schemes.

“There was really great work happening on how do we increase the supply of these projects and structure them and prioritize them, advertise them, present them to investors so that they can put them into their models, make sense of them and actually begin deploying capital,” Shandal says.

“If we can get that unlocked, my optimism for what we can do for communities that will be impacted most by climate change starts to climb precipitously,” he says.

Heat is on at the World Cup

The FIFA World Cup kicked off in Qatar on Sunday, where temperatures reached as high as 95°F. In the 12 years since Qatar won its bid to host the World Cup in 2010, over 2,000 Nepali migrant workers have died laboring to make the event happen; many of them perished from extreme heat. NYT

The British government announced it will invest $7 billion in upgrading the U.K.’s housing stock, installing heat pumps and insulation in buildings with low energy efficiency to help save on household fuel costs. The fund is a welcome U-turn from the government, which has ignored calls from protest groups to finance insulation upgrades for over a year, all while the country suffers from a worsening cost of living crisis. Guardian

The U.S. is extending a $1.1 billion lifeline to California’s last active nuclear power plant while the state is seeking to postpone the site’s decommission beyond 2025 to meet rising electricity demand. The plant provides 9% of California’s electricity. The federal grant comes a month after the state legislature last month issued grid operator PG&E, which manages the Diablo power plant, a $1.4 billion loan to help contend with extreme weather events that are causing blackouts. NYT

Shell said Monday it would have to “evaluate” plans to spend $40 billion on a U.K. project after the government decided to increase a windfall tax on oil majors. Oil giants like Shell have earned record profits this year off the back of surging oil prices and have issued substantial dividend payments to shareholders. On Monday Shell’s U.K. country chair told an industry conference that higher taxes would mean “less disposable income in [Shell’s] pocket,” leaving the company with less to invest. Reuters

Mushroom ‘leather’ realistic enough for $4,200 Hermès handbags has raised over $187 million from investors like Natalie Portman, John Legend, and GM by Ian Mount

Bike share programs have been quietly polluting for years. Now companies like Lime and Lyft are improving design and operations to deliver on sustainability promises by Zoë Corbyn

Nuclear fusion has been a pipe dream for decades, but it might actually be on the cusp of commercial viability by Alasdair Lane

Goldman Sachs will pay $4 million to settle a U.S. regulator's claims that its asset-management team didn't properly weigh ESG factors in some green products it offered to investors. The bank hasn't admitted to or denied the charge, choosing to settle instead. The SEC said Tuesday that Goldman Sachs allegedly carried out the misconduct between April 2017 and February 2020.