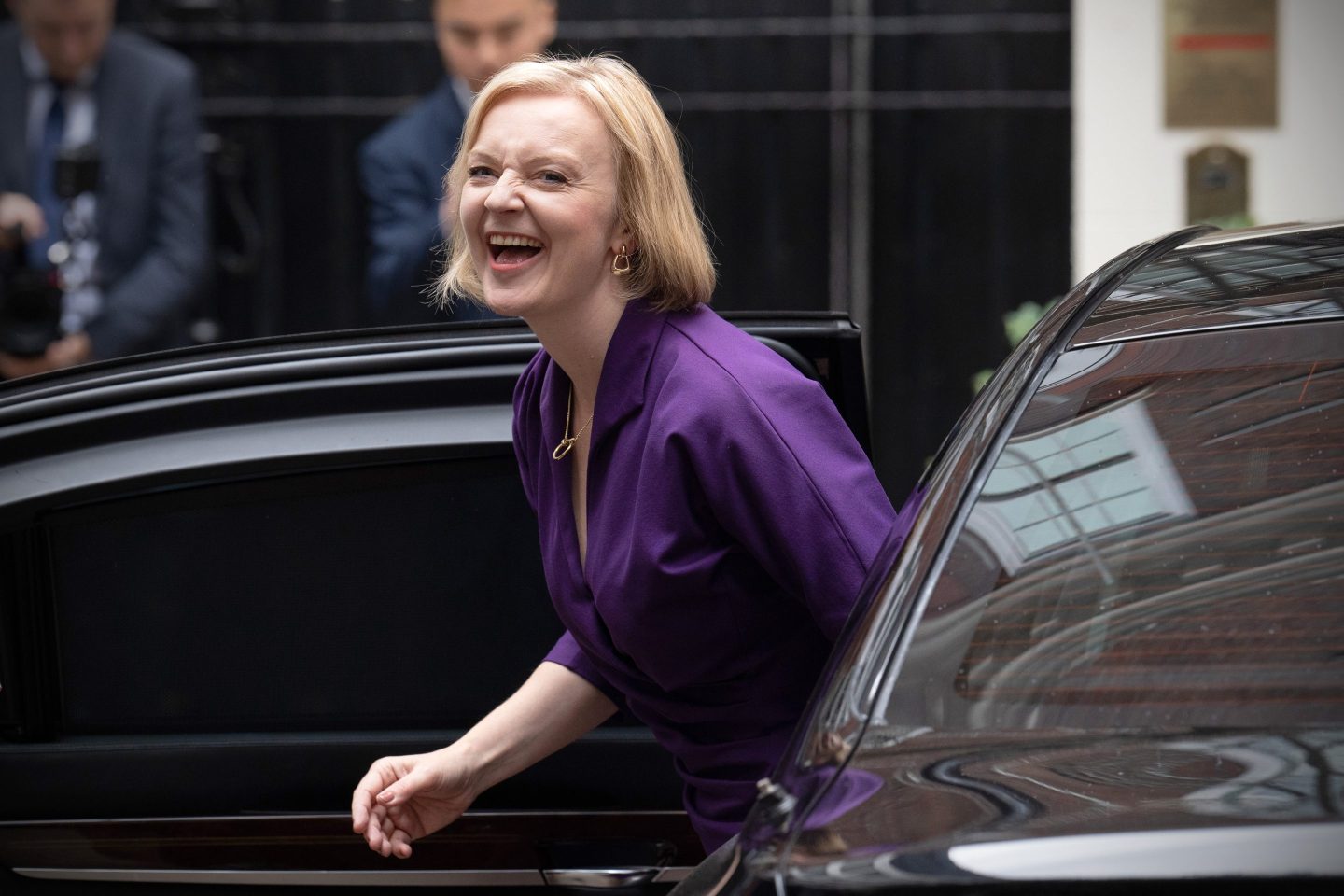 Of the many challenges facing the new U.K. Prime Minister Liz Truss, who officially replaced Boris Johnson on Tuesday, the country’s soaring energy crisis is by far the most pressing.

With winter looming and the war in Ukraine ongoing, the U.K. energy regulator Ofgem warned in August that British households’ energy bills will surge 80% in October when a government mandated cap on energy prices expires. Under Ofgem’s proposed ceiling increase, the average household energy bill would leap from £1,971 to £3,549 ($4,100) a year.

“Without intervention, U.K. households will suffer the largest real terms decline in disposable incomes since records began,” climate and energy think tank E3G said in a recent proposal outlining policy measures Truss could take to alleviate the energy crisis. “The pain will be most acute for those on lower incomes, but even those on middle incomes face declines of between 5% and 8%. One in three households could find themselves in fuel poverty this winter.”

Truss, who served as the U.K.’s environment secretary in 2015, supposedly has a plan. The BBC reports the new PM will announce a freeze on energy price increases on Thursday, keeping the cap at £1,971 by subsidizing energy providers through a loan scheme that will cost the government an estimated £130 billion ($150 billion) over 18 months. Bloomberg reports a separate scheme to support small businesses, which do not benefit from the same price cap, will cost the government a further £40 billion.

“Investment in energy efficiency lowers households bills permanently, bringing down inflation, reducing the risk of recession, and putting money back into the economy because people aren’t spending more on their energy bills,” says Colm Britchfield, a policy advisor at E3G and one of the authors of the group’s proposal.

E3G is one of numerous energy policy advisors recommending Truss’s government invest in insulating homes and other tools to boost energy efficiency. Building out renewables is another favored suggestion. But Truss has shown no signs of adopting those policy proposals.

During her tenure as environment secretary, Truss slashed subsidies for solar power farms, calling them a “blight on the landscape.” During her campaign for PM, Truss promised to review a ban on fracking. The Times reports Truss will increase licenses for new oil and gas exploration projects, and Truss has pledged to scrap the so-called “green levy” on consumer energy bills, which helps fund government schemes to insulate homes.

“We need to see the detail on what suspending green levies mean,” Britchfield says, noting that the government might opt to take on the cost of the “green levies” itself but that actually scrapping the funding altogether would be “a real disaster.”

The government cut a similar insulation scheme in 2013, Britchfield says, resulting in roughly 9 million homes missing out on efficiency upgrades that could have shaved £300 off of their annual energy bills. Now, with the U.K. legally bound to achieve net zero carbon emissions by 2050, insulating homes should be a vital policy—but Truss has kept mum on the topic.

“The most effective way to lower costs without lowering quality of life is to get more out of the energy we buy and the case for investment in energy efficiency has never been stronger,” Britchfield says. “The challenge is now convincing politicians like Liz Truss that this is actually a worthwhile investment.”

Shell CEO Ben van Beurden is preparing to vacate his role as the head of the European oil major after nearly a decade in the position, Reuters reports. Shell has begun shortlisting candidates to replace van Beurden, who is likely to serve until next year. Reuters says the company’s current chief of “integrated gas and renewables,” Wael Sawan, who joined Shell in 1997, is the most likely candidate to replace van Beurden. Reuters

Last Friday, Russia announced it would halt gas deliveries through the Nord Stream 1 pipeline into Germany indefinitely, the same day members of the G7 agreed to a price cap on Russian oil. Russia’s embargo will exacerbate Europe’s energy crisis. On Saturday, Germany passed a $65 billion relief plan to help citizens cope with soaring costs of living, which will be partly funded by new windfall profit taxes on energy giants. Another one of Germany’s consumer-saving schemes—subsidizing rail travel for a month—helped reduce CO2 emissions by 1.8 million tons, or the equivalent to powering 350,000 homes for a year. Bloomberg

The International Atomic Energy Agency said it was able to successfully inspect the Russia-occupied Zaporizhzhia power plant in Ukraine last week, easing safety concerns over the plant’s operation. But the UN agency will continue inspection over the coming days and says it plans to leave a permanent presence at the site, Europe’s largest nuclear power plant. Ukraine’s energy regulator reports that Russian shelling near the plant forced Zaporizhzhia to shut down two of its six reactors recently. Financial Times

Members of the oil producing cartel OPEC+ agreed Monday to cut production by 100,000 barrels a day—a tiny amount, but enough to keep oil prices bubbling around $100 a barrel. Analysts posit the cut, which rebuffs U.S. pleas for the group to increase oil supply and lower prices, is a warning shot to Western countries that are trying to tame the price of Russian oil. The G7 agreed to enforce a price cap on Russian oil days earlier. WSJ

BYD dominates China’s electric car market. But its stock is slumping after Warren Buffett sells shares for the first time in 14 years by Nicholas Gordon

From Merlot’s flavor to Cabernet’s acidity, here’s how climate change is reshaping the world’s most beloved wine regions by Hollie Stephens

China’s Sichuan province was dealing with a record heat wave and a COVID lockdown. Then came a deadly earthquake by Nicholas Gordon

The U.K. opened the world's largest offshore wind farm, Hornsea 2, last week, installing 165 turbines, each measuring 200 meters tall, 55 miles off the coast of Yorkshire. The new wind farm stole the title of world’s largest from its neighbor, Hornsea 1, and can generate enough electricity to fulfill the needs of a city with 550,000 people. According to Patrick Harnett, program director at Hornsea 2, a single rotation of the 81-meter long blades of each turbine takes just six seconds and generates enough energy to power a single home for a day.